My Glory Days as a Phillies Girl

When I was still a teenager, with my second fairly serious/regular boyfriend Danny, I received advice from him that just flabbergasted me at the time. He was very smart, (Penn, Ivy League – Wharton as a matter of fact) and he, like me, was working his way through college. Coming up with money for things was always a challenge, and Danny was shrewd enough to search for clever ways to earn money – all legally I should add, which is ironic because we first met at a regular low paying department store job.

One day we were talking about our lack of funds and he stopped discussing for a moment to study my face, and then look me up and down. A light bulb went off in him – he announced that I should parlay my looks for a lucrative job. At the time, I was both naive and skeptical that jobs like that even existed, and I was still stuck in my low self esteem mentality from my ugly duckling stage of pre-teens and early teens. Still, I was very willing to give that a shot with his guidance and in short order I got a promotions job at a radio station, (as a Boss Chick -don’t even ask) and for a temp and modeling agency called SuperGirls.  (I still have my name badges for both in my memorabilia box!) Both paid very well. Here are some portraits of my face at that time in case you haven’t seen them on Facebook- I post them in wonder because I never even realized I was pretty at the time! 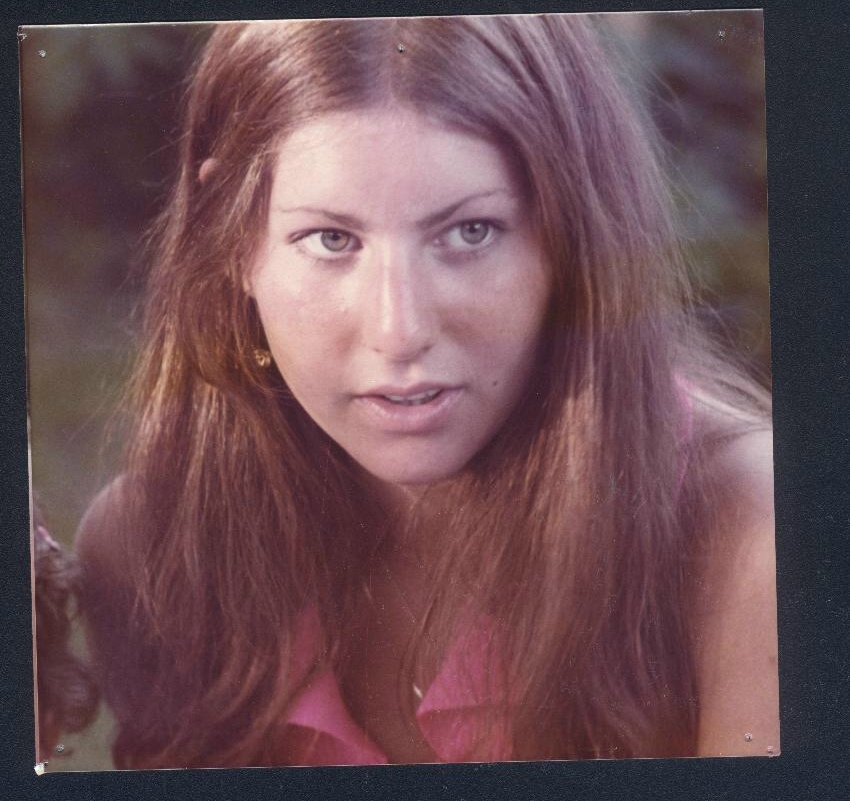 Danny loved baseball (and my green eyes); and we found ourselves at a Phillies baseball game during a date. He looked at the girls around us there who wore hot pants; they were part of a squad of girls called the Hot Pants Patrol, (also known as Phillies Girls and check out the Wiki page at that previous hot link!!!!) who worked various jobs at the games, and as he surveyed the scene, he told me I was better looking than most of the girls, and with that and my long legs,  I should go for that job.

I didn’t act on that suggestion until I met another Phillies Girl in college. She hated the Hot Pants moniker, even though that’s what she wore. At any rate, she found out about my love for baseball, and told me she would let me know when auditions for Phillies Girls were taking place. She assured me that I would make it, and once I rose through the ranks, I would be making a lot of money.

She gave me a bit of advice: to let the audition people see that I was a true baseball fan by throwing in some facts and statistics. That part was easy. I sailed through the first round, the second round, and unbelievably got to the last round with the general manager.

I got word shortly after that I was hired for the 1976 season, and fitted for several hot pants outfits. The Phillies baseball team back then was a team of budding superstars – an exciting team, and they ended up winning the World Series in 1980 while I was still working for them. It was a great era to work for an exciting team. 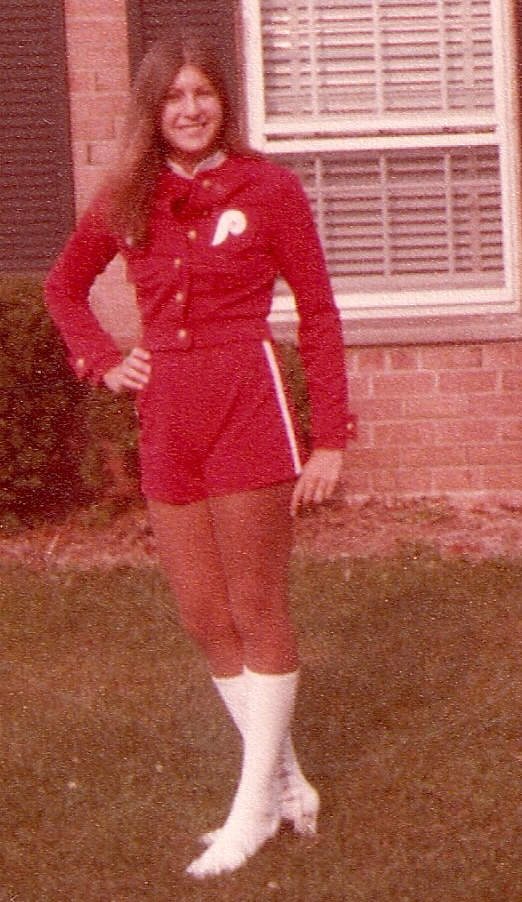 The job started fairly lowly – ushering the upper deck seats. Our boss, who we referred to as “Barracuda,” was strict about uniforms looking perfect, good grooming, and demanded a sweet, compliant mannerism as well as timeliness. Once late, and you would be banished to the upper decks forever. I stuck out that first season, but it wasn’t as fun as I had hoped, nor did it provide the money I expected. (Double headers! Rain Delays! Drunk people!)

I made sure that first season that I was never late, never missed a game, and I schmoozed Barracuda pretty good, often asking her about her child, which even with her sour demeanor, she secretly loved. By my second baseball season, I got placed in the corporate boxes where I was eye candy for company people who rented them complete with food and drinks.  I would make sure they had everything they needed; if they needed a program or a Phillies cap, I went out and purchased one for them – that kind of thing. I did not have to serve them at all, I just had to talk to them, smile a lot, and be very pleasant, asking occasionally if anyone needed anything, and representing the team well. I always received a huge tip at the end. Before I knew it, I was getting a ton of plum assignments in those boxes for important people, and the people coming courtesy of various companies wanted to take their photo with me. Imagine that!

The next season, I was promoted once again to working field boxes, which is the most visible place a Phillies Girl could be. It was there where you got to perform with the Phillies Phanatic mascot occasionally, and where you could end up on the big screen or on TV. As the season was long, and we worked every home game, this fun stuff broke up the monotony. Here I am in an example, from the main Philadelphia newspaper at the time. 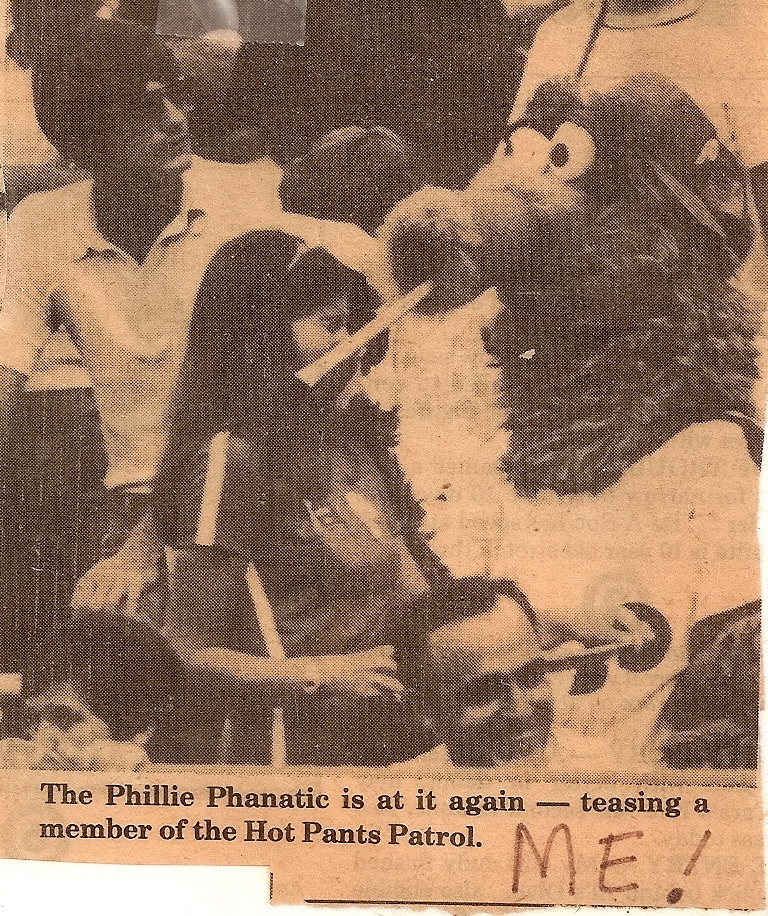 The bad part of this assignment was that you had to be a waitress for food and drinks but the tips were huge and so I wasn’t complaining due to the great money I was making. It was a high profile placement, and I got noticed by players who slipped notes to me, and I was romantically pursued by the Phillies Phanatic, the guy IN the mascot costume, who was quite a little celebrity in his own right in those days. (Dave Raymond) I was right down there at the visiting dugout through the World Series in 1980. 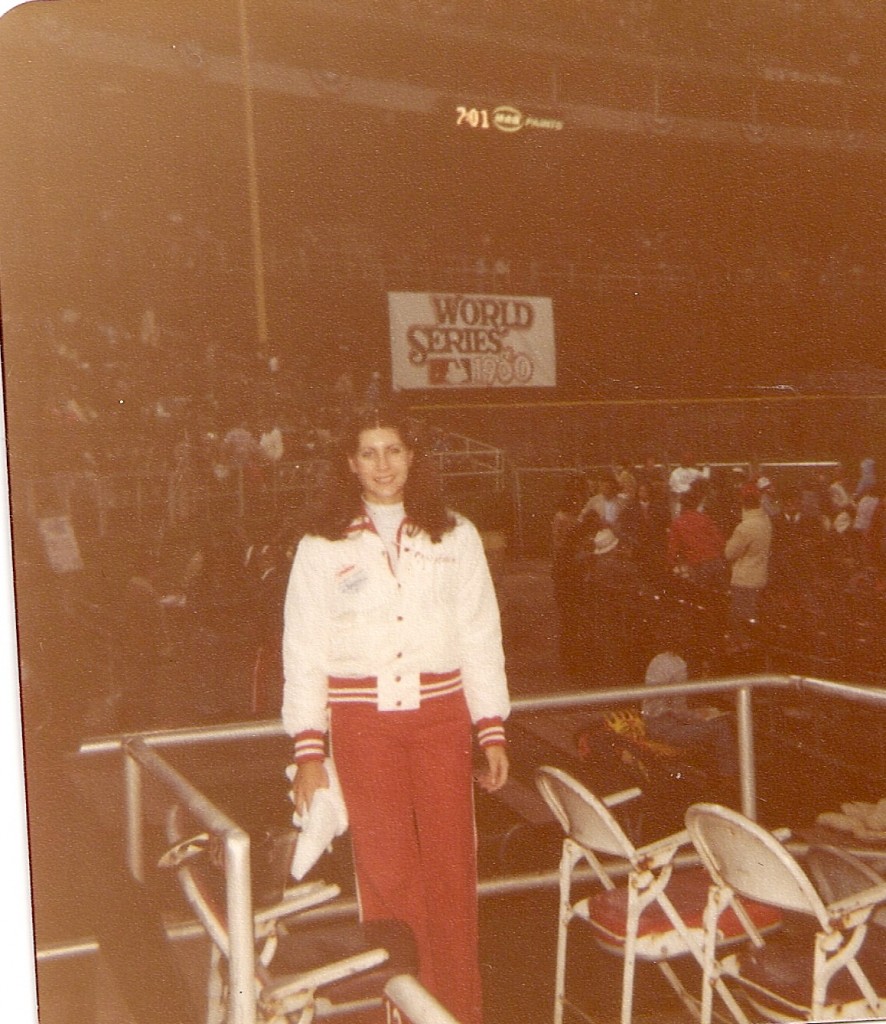 While in the field boxes, having been in the newspaper and on camera a bunch, and in a million stranger’s personal photos,  the promotions team, headed at that time by an announcer Chris Wheeler (“Wheels”) noticed me too. I got placed on the Phillies Girls Promotions Team. This was the best placement of all. We had various assignments around the city and within the games to represent the team in the best light possible. I worked at bank openings, store sales, various giveaways, charity promotions, and the like. It was not only fun, it paid very well. Here I am at some random giveaway in Center City Philly. And another one at a charity event where I didn’t have to wear my uniform, with superstar Mike Schmidt, who was a friend. 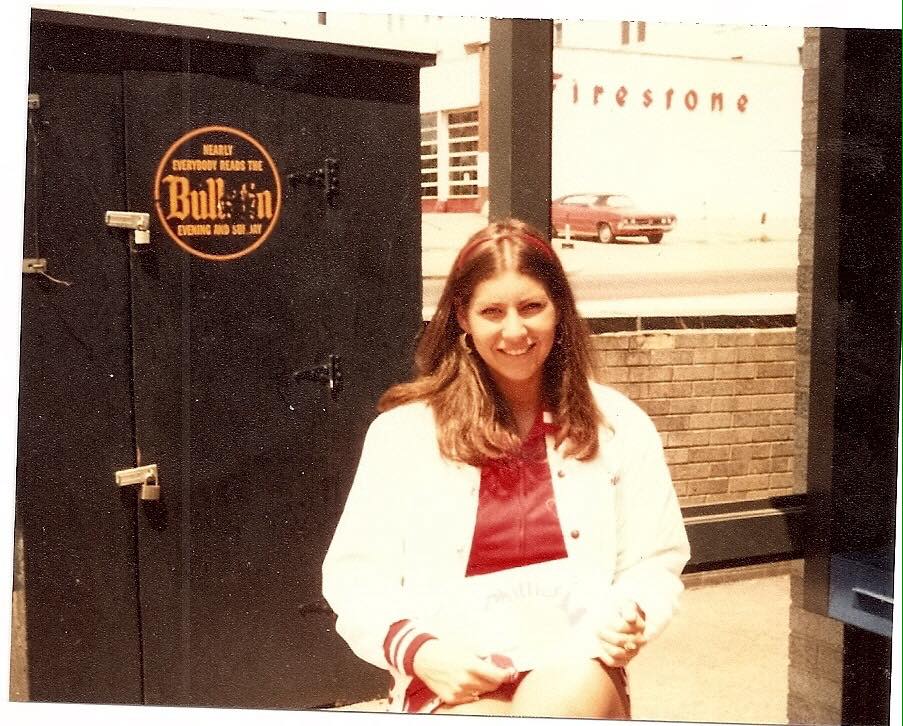 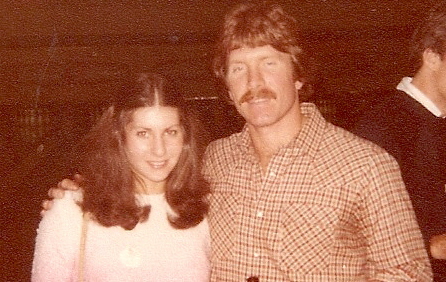 I have tons more photos with the players like the one above.

Being kind of high profile with a successful team in a city like Philadelphia, I got all kinds of perks during my era on the promotions team, such as a gold card to Elan, the hottest club in town, and loads of invitations to fun events.

(And my favorite anecdote was the time I worked a playoff game and sitting there in my section was my elementary/jr.high crush who never gave me the time of day but knew me through high school. When I told him who I was, he was in awe, and even wanted his photo snapped with me. Ah, sweet justice.)

**I must note here that although there were lots of temptations to be a “bad” girl, I kept my values intact, and almost always had a significant other during the entire time. I led a very regular life aside from this, first as a college and then grad student, and then as a government investigator as my first job out of graduate school.

Every year as baseball season begins, I remember my seasons in the baseball business with a great baseball organization in the Phillies. (I left in 1981 when I moved to Houston.) I feel so fortunate to have had this experience that helped me work my way through college and graduate school. I finally developed some self-confidence and poise thanks to this role. Thank you Danny for that great idea! (Footnote on him: He grew up to be rich and successful and I know this because we are peripherally connected.)

Of course I have a thousand war stories of players, of things that happened while I was in this role, lots of dates requested, and some particularly interesting parties and charity events I spent with some of the baseball superstars of the day.  But I will save all those war stories for another day, perhaps for that memoir I will write one day. Go Phillies! You will always be my team. And Go Astros, my adopted team.