Oh No, Time for Embarrassing Stories in Honor of Brett’s Birthday!

It’s my son Brett’s 27th birthday on Sunday Dec 11th. He has given me millions of minutes of joy, giggles, fascination, and happiness since the day he was born all those years ago.

In honor of his birthday I thought it would be great to reminisce a bit and tell a few of my favorite little guy Brett stories that you might enjoy. It’s my own personal version of “Kids say the Darndest things.”

Brett was a character from the get-go. He had an early fascination with McDonalds, Ronald McDonald and Happy meals – since he was a pre-talking babe. 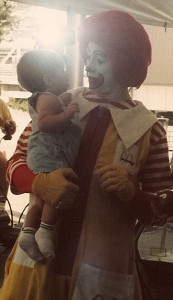 One day while driving in the car from the rear and the car seat behind me I heard a loud and urgent noise coming from my little son. ONALD, ONALD, ONALD he repeated over and over again. He hadn’t said much more than dada at that point. I couldn’t figure it out and then I saw the golden arches in front of me. How many people can say one of their child’s first words was McDonald’s related? (He was saying McDonald’s -at least as much as he could pronounce)

His first haircut was very traumatic. He didn’t want anyone messing with his bowl cut. That is until he found out there was a lollipop at the conclusion. 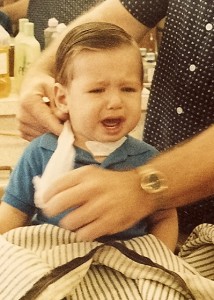 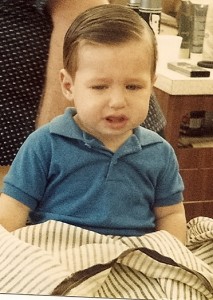 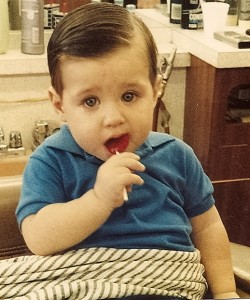 When Brett was in a religious preschool, every Friday they would sing prayers. One of the prayers thanked God for BREAD. For at least a full year of this school, Brett thought all the children were singing to him, “We give thanks to God for Brett.” (He obviously had a healthy self-esteem from a very young age) He was stunned to find out the truth, and we still laugh about it to this day when we sing that prayer. 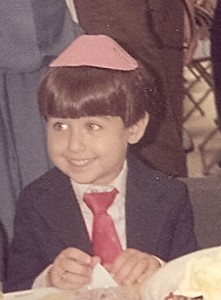 As Brett got to be a walking, talking toddler, he also became enamored of a Mexican restaurant Pappasito’s. Brett loved the Mariachi band there and they would always pay attention to him and sing his favorite song “La Bamba.”  We bought him a tiny guitar at the age of two and he would go around singing “Bam, Bam, Bamba” day and night like a miniature Mariachi. (We even hired said Mariachi band for his third birthday party to entertain) Our little blue eyed, thick bowl-cutted cherub made a cute, if unusual Mariachi. 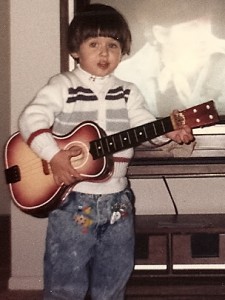 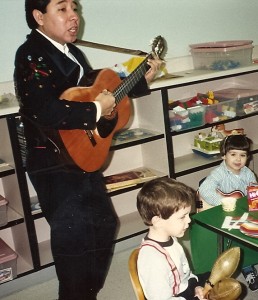 Notice Brett with a guitar in his lap and a tiny Mexican birthday hat on his head.

And here’s my favorite story.

We were very PC parents and taught our children all the proper names for various body parts as was the vogue then. One day during bath, around the age of 3, Brett was telling us that someone at school said the “P” word in class for a girl’s private part. The P word? His dad and I were horrified, thinking the worst. We asked Brett, what P word? He answered, “You know, it begins with Puh.” Even more horrified now thinking that another child made use of a derogatory term for the female anatomy in a preschool class, I finally made Brett spit out the word so we could have a discussion about it.

He then replied, “Puh-gina!”  Brett absolutely did not understand why we broke out in hysterical laughter over that after being horrified minutes earlier.

He was a model child and a child model – pretty cute, huh? 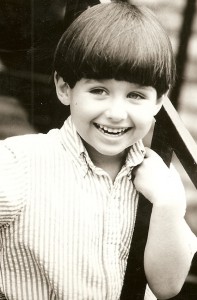 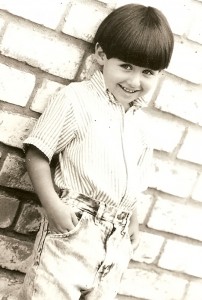 My son has retained his marvelous sense of humor and love of life and entertainment. Brett is an amazing young man, bright, and having great success as an attorney with a big firm. He is concerned about the world, funny as all get out, a bit obsessive on sports, and loving as can be. He has a million friends and he always makes time for those he loves. I am so very blessed. 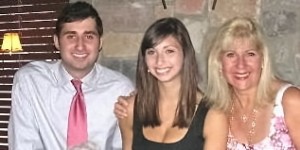 Here’s a photo of Brett recently with my daughter Elissa and me, his proud mom.

Happy 27th Birthday Brett with lots of love and please forgive me for the embarrassment of this blog!