A Star is Born

That’s a great title, and I could have sworn I would have one day written that about my own offspring, because they were always such stars in my eyes. Yet this blog isn’t about them.

My daughter Elissa, in particular, was quite the little performer. She began entertaining before the age of two, and it took a rotten High School teacher to get her to quit the theater biz.

But until that time, oh what fun I had as a mom watching her sing, dance, act, and perform.

My children went to a small, private middle school that boasted the most fabulous theater teacher imaginable, named Mr. D. All the children in the school, shy, outgoing, talented, and even those of limited talent- all wanted to be part of Mr. D’s shows. He was a legend because of how he could cultivate natural talent and due to the gift he gave all his students –  a love of theater and performing

Because we were a small community, we all knew each other as we watched our kids grow up. We cared for one another too – and rooted one another on. We mostly shared all of the events with all of the children and most of the parents included those years, birthdays, bar and bat mitzvahs. It was a fun time for me as a mommy. 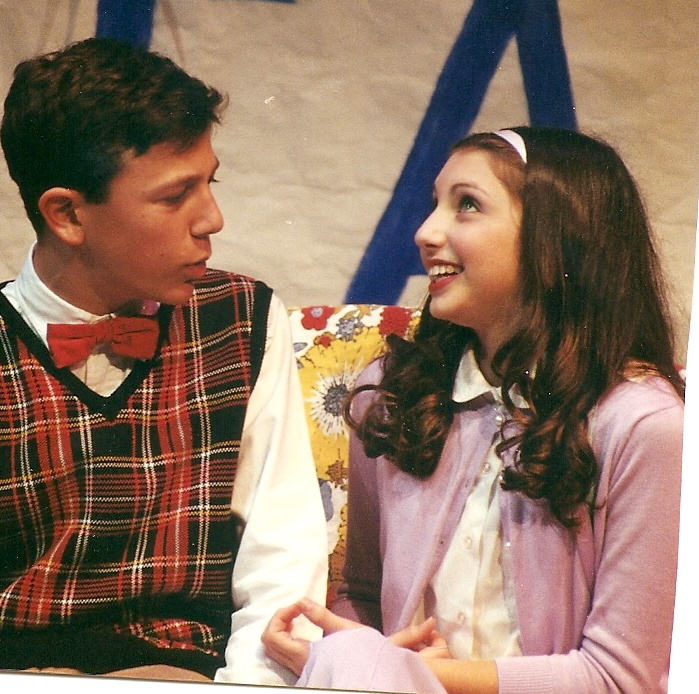 Theater season at this school was a big deal. Mr. D. so inspired kids to be performers, that a few are now on their way to fame and fortune. Including the one this blog is about and one I previously wrote about.

Since I was a volunteer extraordinare at this school, I was a theater mom. I sewed, helped with props, carpooled to rehearsals, sold ads and tickets, and helped monitor unruly kids during rehearsals. Yes, I signed up for all that. Because of that, I got to see each show from its inception.  I was so attached to all the kids there, and just loved watching the kids blossom while performing.

Side Note: I was so into these shows, not just to watch my daughter perform, but watch all of the characters the kids brought to life, that I watched every dress rehearsal start- to-finish, and attended every performance of every show. Even when my own kids weren’t in it.  I got there crazy early to get good seats.

Still on the side note, after tirelessly volunteering endless hours to prepare this particular show and looking forward to seeing my daughter in a  featured role, AND hosting my mother-in-law, who flew 1600 miles to see my daughter perform, one incident stands out. A hateful person (the few and far between in this environment) decided to volunteer this one night as an usher. Ushers were allowed to save seats for themselves as a reward, so they could reserve themselves the best seats. After seeing this hateful woman, who was ushering with her husband,  reserve not just their 2 primo seats, but an entire row for their whole, extended family, I sat my mother-in-law down in one of the seats in their “held” row. (Holding a whole row of seats was NOT part of the deal – this woman just made it the way she wanted it to be) Now please note, that my mother-in-law of blessed memory, had ONE good LEG and an artificial one. She needed to be situated fairly quickly. This woman created such a scene when we sat down. Soon everyone around us was coming to my defense and shouting at her, and so we stayed in those seats, with that woman spitting mad from that day forward. I held my ground despite major intimidation– that’s how much I loved these shows.

Back to the story at hand: It is with pride and my wonderful memories of those days (with the exception of the one bad incident above)  that I write this blog. Because another star is born from their tiny, private middle school. He was a guy that sparkled – who always stood out in these shows. His name is Jon Bass.

Jon was a character – a kid full of personality and humor. Mr. D. caught on to this right away and gave Jon a chance to shine in these shows. And entertain Jon did. He was always such a hoot. 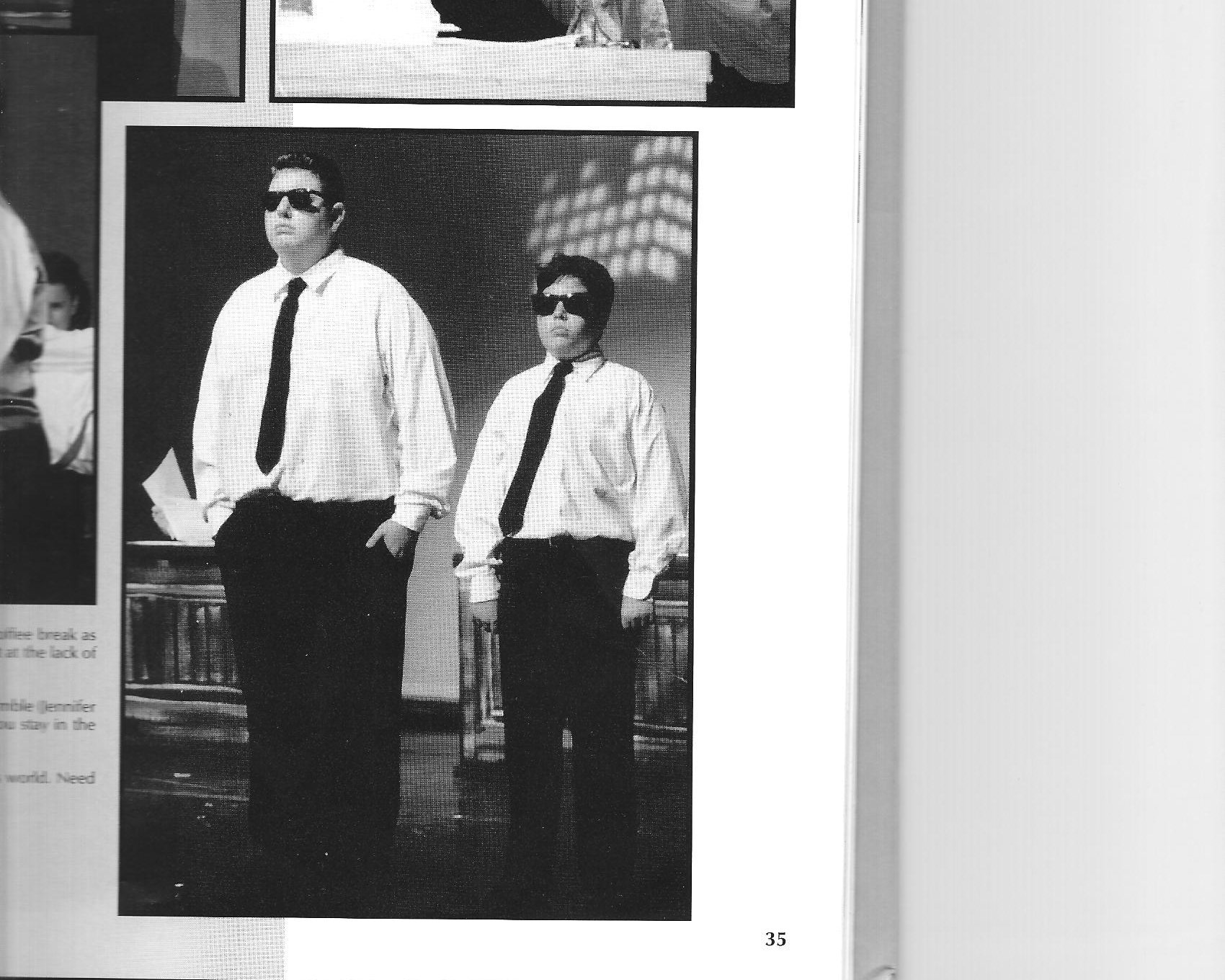 Jon is the little guy to the right. 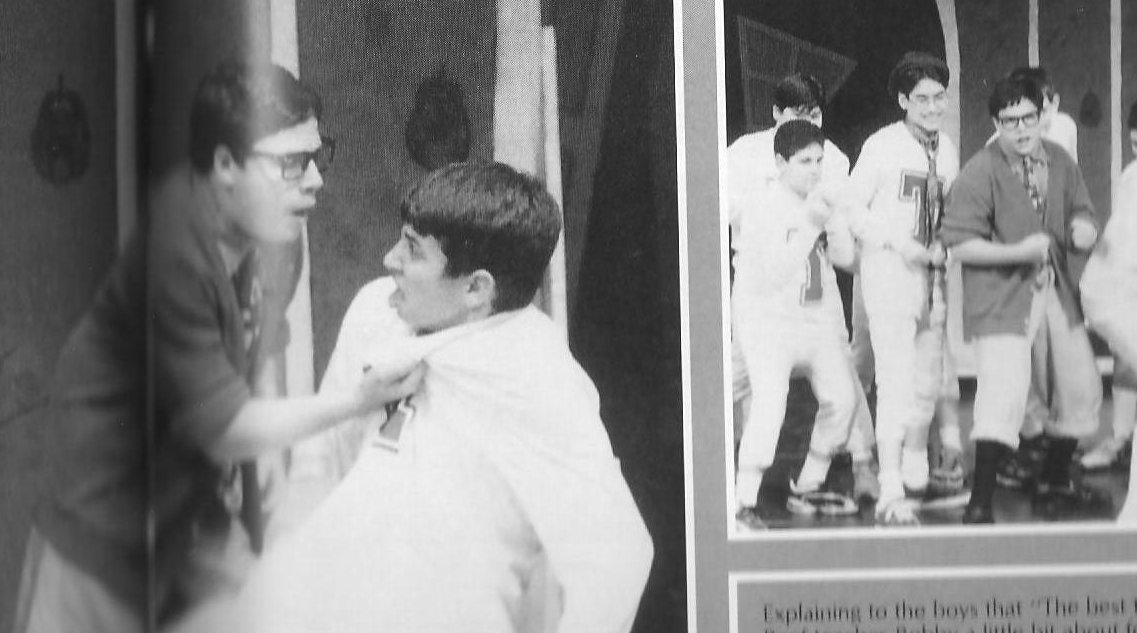 Well, the kids grew up and Jon went off to college, and continued performing. He’s only 25 and he recently he landed the role of a lifetime. He is starring as Elder Cunningham in the hottest show on Broadway, The Book of Mormon.

Yes, you read correctly. Starring. On Broadway. The second lead. The funny, nerdy, Mormon missionary who gets into trouble – a perfect role for Jon Bass if I ever heard of one.

My daughter and I were so over-the-moon happy for Jon and his parents. We wanted to do a mother-daughter trip so we decided to splurge and do a New York City trip, complete with orchestra seats to see our Jon Bass star on the hottest, funniest show on Broadway.

There is a Yiddish word for feeling pride, and it is to “kvell.” Well, even though Jon is not my child, I kvell over him and his success as if he were my child. Our community just bred that sort of sentiment.

I can’t wait to give Jon the standing ovation he deserves.