On Beards, Mustaches, and Hairy Swimmers

In 2016, it is the year (or years as it has been this way for at least two to three years) of the manly beard. Even the most clean-cut lawyers in their sleek business suits in their corporate towers are sporting neatly trimmed full facial hair. (Including my devastatingly handsome son, Brett.)

Not so in the 1970’s and 1980’s when I was coming of age. Back then, the only facial hair in vogue for men was the mustache. (Think Ron Burgandy.) Just about everyone had a mustache; even those guys with peach fuzz with no business having a hairy upper lip, had tried that look. Remember Tom Selleck, Alec Trebek, Burt Reynolds? There are so many more examples, but the one I remember most vividly, as I had the hugest crush possible on him, was Mark Spitz.

I have always been interested in sports in varying degrees – I get that from being a Daddy’s girl as my father was very much into sports. I got into the Olympics as a young girl, mostly winter Olympics and skating, but by 1968, I was glued to track and field and swimming in the summer Olympics.

It was then that I saw the most heavenly male bodies and physiques ever in the form of male swimmers. (Hubba Hubba) With mostly Adonis type of bodies, I was fascinated back then and even moreso now, when the sport has evolved to such physically fit, strong athletes.

There was only one swimmer I set my eye on, back in 1968 – he was a bit of a bad boy but had brooding eyes and a beautiful face: Mark Spitz.

Four years later at the next Olympics in 1972, Mark Spitz won 7 gold medals in swimming and was the darling of a fearsome Olympics that saw Israeli athletes murdered. (A whole topic for another blog). My athlete crush in 1972 was the best swimmer in the universe, the Michael Phelps of his day. The differences in their appearance though is kind of worth discussion.

Mark Spitz sported a bunch of body hair – a THICK head of moptop hair, a mustache, armpit and assorted body hair, and no swimming cap. His gear was his speedo. There was no shaving in those days, no cap wearing, no shaved heads for sure. There isn’t a swimmer around now that swims without a cap. Back then it was common to see hairy bodies in the pool.  It’s all about technology and “drag” in the water now. Swimmers shave every hair follicle off their bodies so as not to have any drag, and they wear not one cap, but two on their heads for the same reason. They wear thermal-dynamic type of swim gear that is made for speed in the pool. A speedo is kind of laughable now.

If you don’t believe me, check out this video. Was he not the cutest? Well, I mean for 1972? (I liked the look so much, I married a guy who was a dead ringer for him!)

As much as I admire Michael Phelps, I kind of think Mark Spitz led the way for him. And it seems those swimmers didn’t know about water drag and hair. They just went in with their hair, their mustaches etc, and just swam. 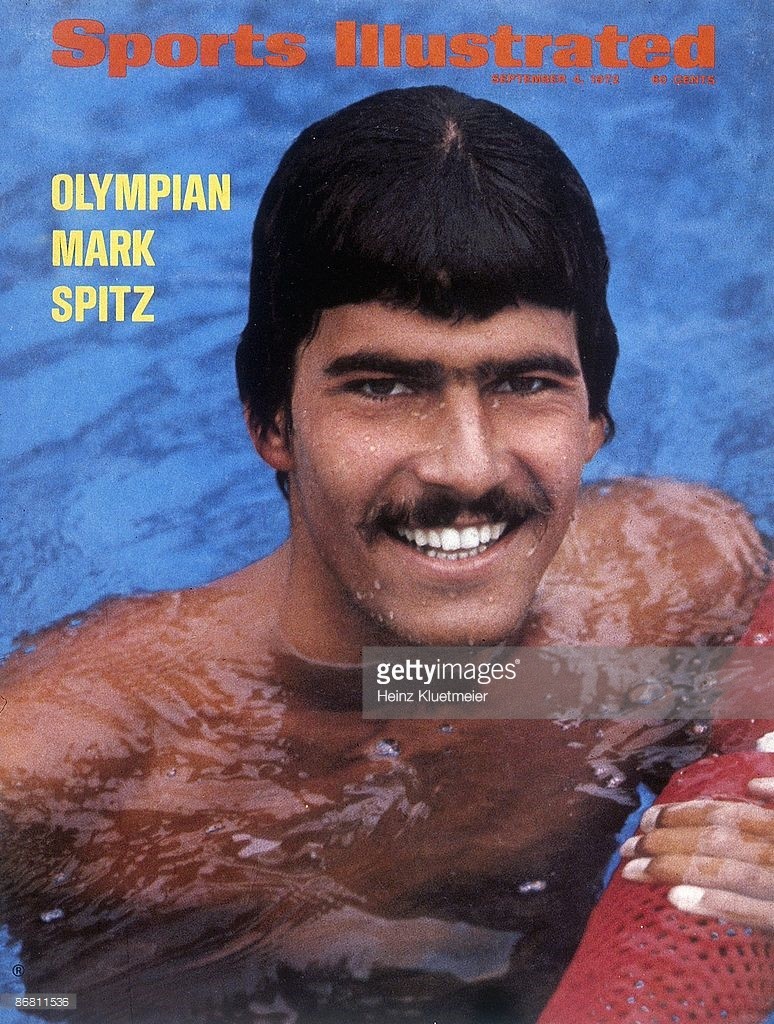