A Bucket List Evening and a Thrill of a Lifetime

Pinch me! Wake me up! I am still floating on cloud nine from a thrill of a lifetime.

If you had the chance to re-create some of the most special and magical moments of movie music from your childhood, wouldn’t you jump at the chance?

That opportunity presented itself to me recently because of the timing of when I planned to visit my stepson in LA, and at the same time I received an invitation to an event happening that very evening of the day I arrived. It ended up being an evening that thrilled me beyond compare, from start to finish.

The event, unbelievably held by the Academy of Motion Picture Arts and Sciences (AMPAS, or Oscars) in the beautiful Samuel Goldwyn Theater in Beverly Hills where I was surrounded by those glittering Oscar Statuettes of all sizes, was long overdue in my opinion. It was a tribute to a pair of one of the most brilliant and prolific, if not the most prolific, movie music composers of the 20th century, the late Robert B Sherman, and Richard M. Sherman, known professionally as The Sherman Brothers. See the invitation from AMPAS below. 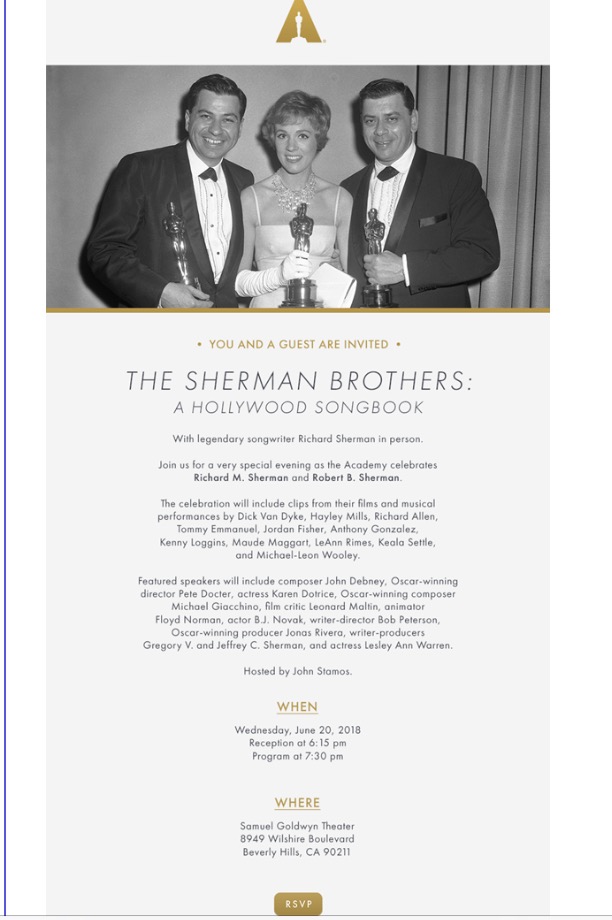 If you have never heard of them, Google them. You will be amazed at the extent and depth of their work, most notably for Walt Disney films in the 1960’s and 1970’s.

Mary Poppins, The Jungle Book, Winnie the Pooh, and the original Parent Trap movies are just a tiny sampling of the movies they wrote memorable songs for; the kind of songs that went straight to your heart and indelibly stayed in your mind. They wrote music that was enjoyed by entire families, and the records of their movie soundtracks were played endlessly until they were worn out. (I know that was the case in my home.)

At this event, my ears and my brain delighted in the familiar lyrics and melodies that were so precious to me from my childhood. I remembered every single lyric. The emotional performances of many of these songs touched me to the depths of my soul.

Although the entire evening was filled with high points, here are some of the ultimate highlights for me:

Hayley Mills: She was the ultimate and most popular child actress of our day, and someone we all admired greatly throughout our youth. After her first starring role in Pollyanna, which I loved, there were Pollyanna dolls sold in her likeness. Shortly afterward, she starred in the original movie The Parent Trap, long before the Lindsay Lohan remake. That Disney movie is one of my absolute favorites from my youth. In that film, she sang, “Let’s Get Together,” an adorable song written by the Sherman Brothers. Believe it or not, she sang this song live on this incredible evening, and sounded just as precious as she did in her youth. (This particular song is also an incredibly good memory of mine from my own children’s youth as I forced it upon them and they loved it too.) 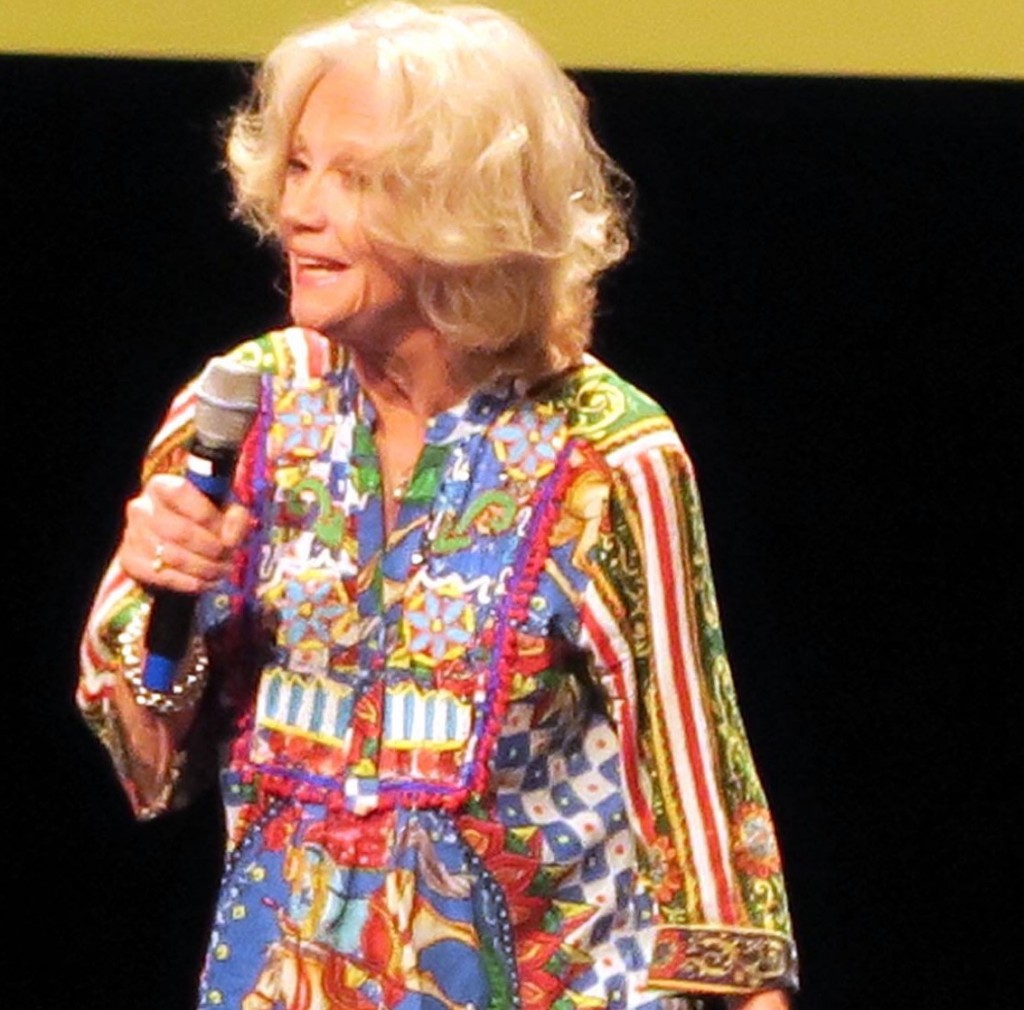 (Hayley above, zoomed in from my camera. She looks ageless.)

Hayley’s speech to Richard Sherman in the audience was charming too, describing how she informed Walt Disney and the Sherman Brothers, “I can’t sing,” (The word Can’t emphasized in her proper British accent) and they responded, (paraphrased here) “Don’t worry kid, we will write you a song that anyone can sing.”

Dick Van Dyke: There isn’t a single actor from my youth more admired. He was a very comical guy who I adored in The Dick Van Dyke Show, and such a multi-talented song and dance man, who starred in Mary Poppins, and so  many more. There he was at age 92 singing his songs from Mary Poppins, doing a little soft shoe dance too, and looking absolutely charming and ageless. 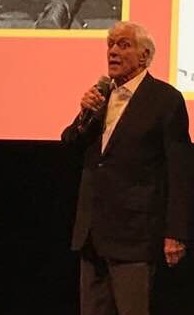 Mary Poppins: Of all the fantastic family friendly movies of my youth and of all the incredible Disney movies of my youth, in my opinion, this one is the most brilliant from start to finish and I can still appreciate it as much today when I see it as an adult, as I did when I first saw it at nine years old. The songs in the movie all have such depth and perfection, that it is only as an adult that I can truly appreciate the songbook with the reverence it deserves. The music, of course, won the Oscar that year, none more deserving. So many beloved songs from that movie musical were played during this wonderful evening, including LeAnn Rimes singing “Stay Awake” and a clip of the original Julie Andrews singing the ethereally beautiful and haunting “Feed the Birds.”

Although like Hayley Mills, “I can’t sing,” I sing my heart out both now and I did the same back in my youth. One of my fondest childhood memories was playing Mary Poppins in a homemade play with my friend Nicki from up the street, and with neighborhood children paying a dime to see us singing to the soundtrack album. (How I convinced Nicki to be Bert to my Mary Poppins, I will never know.) Yet, that memory helps explain just why the songs from that movie were so extra special to me.

In the many magical and poignant moments of the evening, I was transported back in time. For the memories stirred, I was feeling fortunate to have been brought up in a time that produced the most gorgeous movie soundtracks that made all of us feel uplifted and hopeful about life, no matter what constituted our every day reality.

It was exhilarating being in the same room as many celebrities that were at the pinnacle of success throughout my youth: Hayley Mills, Dick Van Dyke, Leslie Ann Warren, as well as meeting other admired celebrities such as Leonard Maltin and John Stamos, and even Russi Taylor, the voice of Minnie Mouse.

Seeing the great composer Richard M. Sherman, and watching him play the piano and sing “Supercalifragilisticexpialidocious” from just a few rows away (three to be exact) was a spine tingling thrill I can not properly put into words even though that’s what I am supposed to do as a writer. The finale of a celebrity-filled sing-a-long to “Let’s Go Fly a Kite,” (another absolute favorite from Mary Poppins) which included an audience (on their feet) sing-a-long and kites flying around the theater, made my heart absolutely SOAR as if it was in flight like the kites above us. 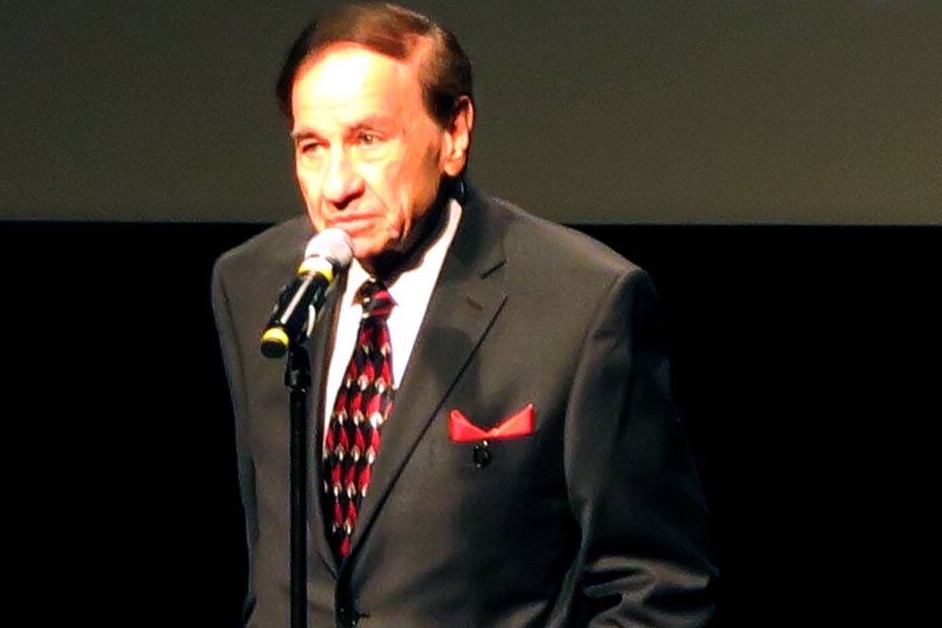 The great Richard M. Sherman, above speaking to the audience. 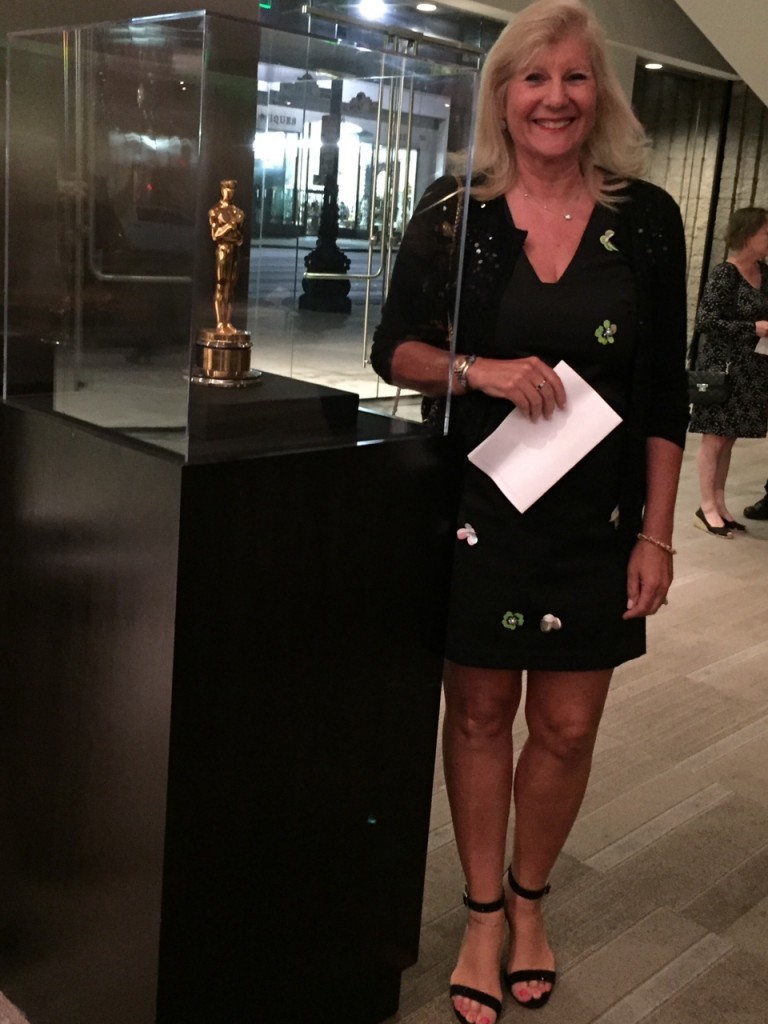 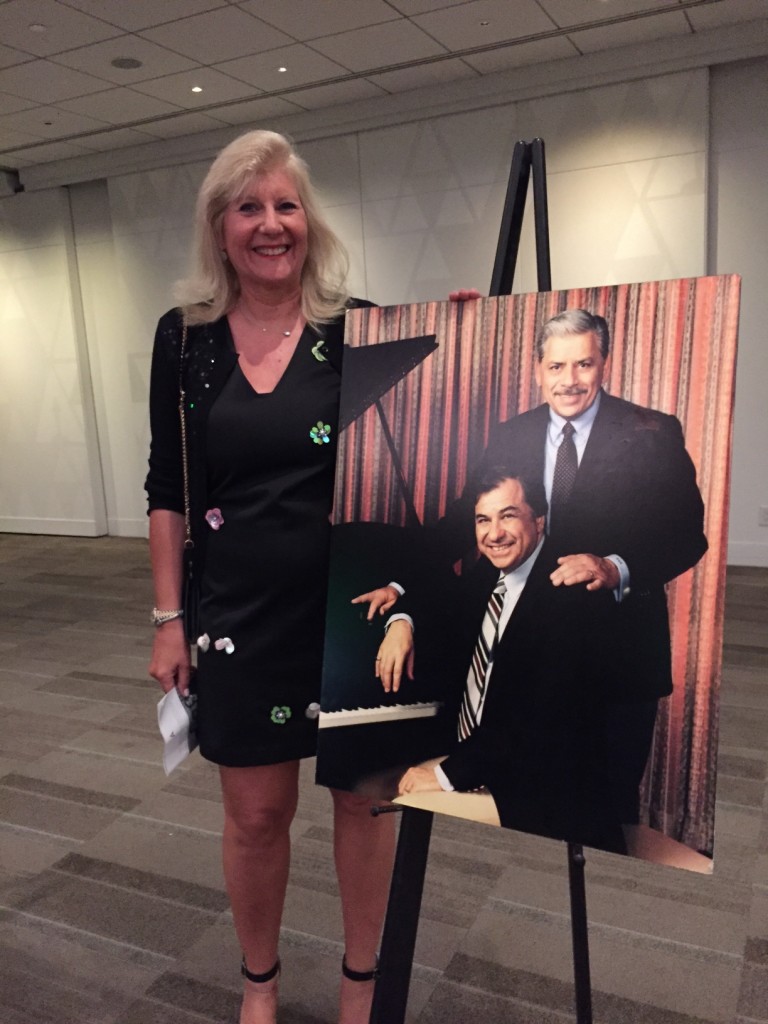 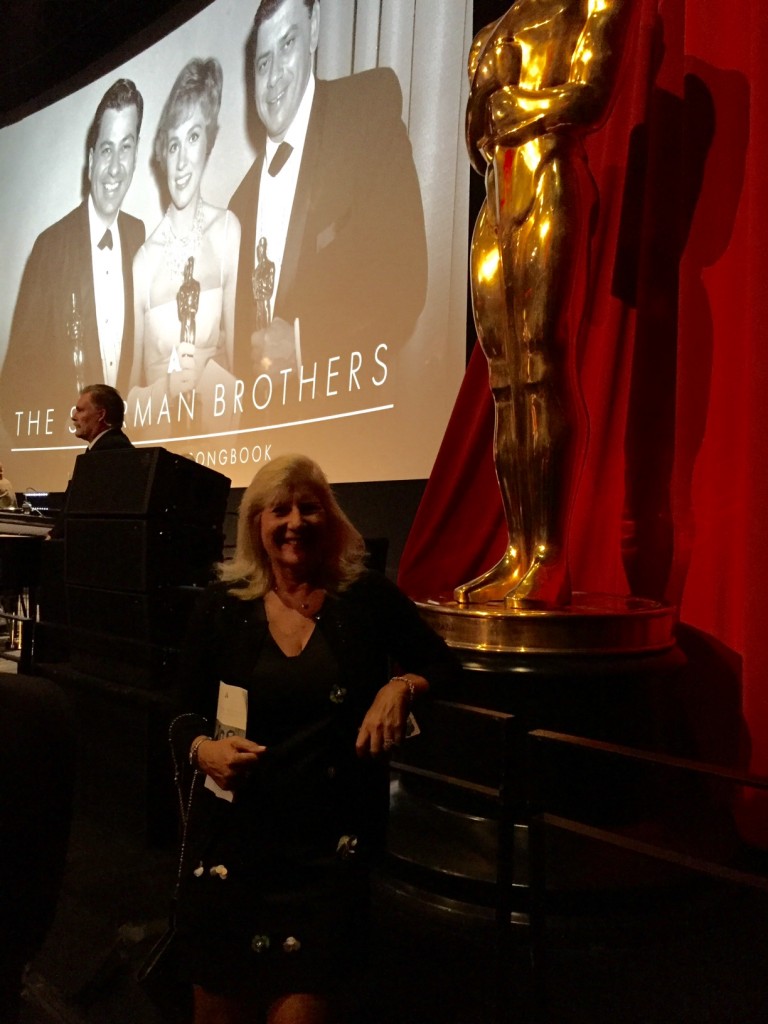 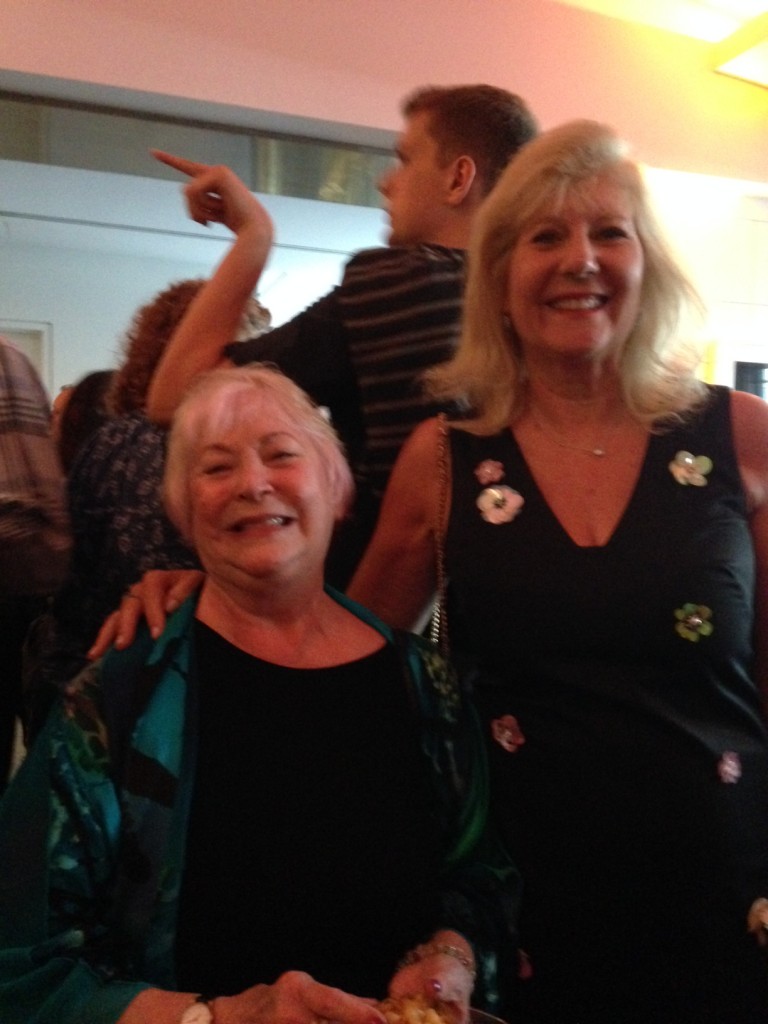 I am above with the voice of Minnie Mouse – Russi Taylor, a lovely lady.

Also, it must be mentioned that the Sherman Brothers were responsible for some of the best music at Disneyland including “It’s A Small World,” and “The Tiki-Tiki-Tiki Room” (one of the smiley-est venues for me on my first visit to Disneyland in 1981.) They also wrote some great pop tunes of the late fifties and early sixties including “You’re Sixteen” (You’re Beautiful, and You’re Mine) made popular by Ringo Starr.

And now you are probably wondering how I wrangled an invitation to such an incredible, once-in-a-lifetime bucket-list event. One of my most cherished and long term old friends (not old in age, just longevity) was instrumental in putting the show together. He is an executive at Disney and he is also friends with Richard (Dick) Sherman who just celebrated his 90th birthday. Knowing me for as long as he has,  he understood how much I would appreciate and love this evening of entertainment, and he was absolutely correct. I was fortunate to bring along a friend with me who loves theater and music as I do, as my stepson wasn’t able to go with me.

In fact, though I would typically get right to my computer to type my thoughts after an exciting event, this evening was so thrilling on so many levels, that I had to let this process in my mind a bit (Yes, I was that blown away) so I could attempt to do justice to it in my Blog. It was truly one of the top entertainment events of my entire life and I have quite a few extraordinary ones under my belt. Here is a great article that summarizes the entire evening and even gives credit to my friend.

I am still, a few weeks post event, filled with so much gratitude and appreciation for my wonderful friend, H, and to AMPAS for this evening, which is one I will always cherish and remember.