In 1985, Steve Jobs was quoted in an interview as saying the following:  “The most compelling reason for most people to buy a computer for the home will be to link it into a nationwide communications network. We’re just in the beginning stages of what will be a truly remarkable breakthrough for most people–as remarkable as the telephone.” (Steve Jobs, 1985) 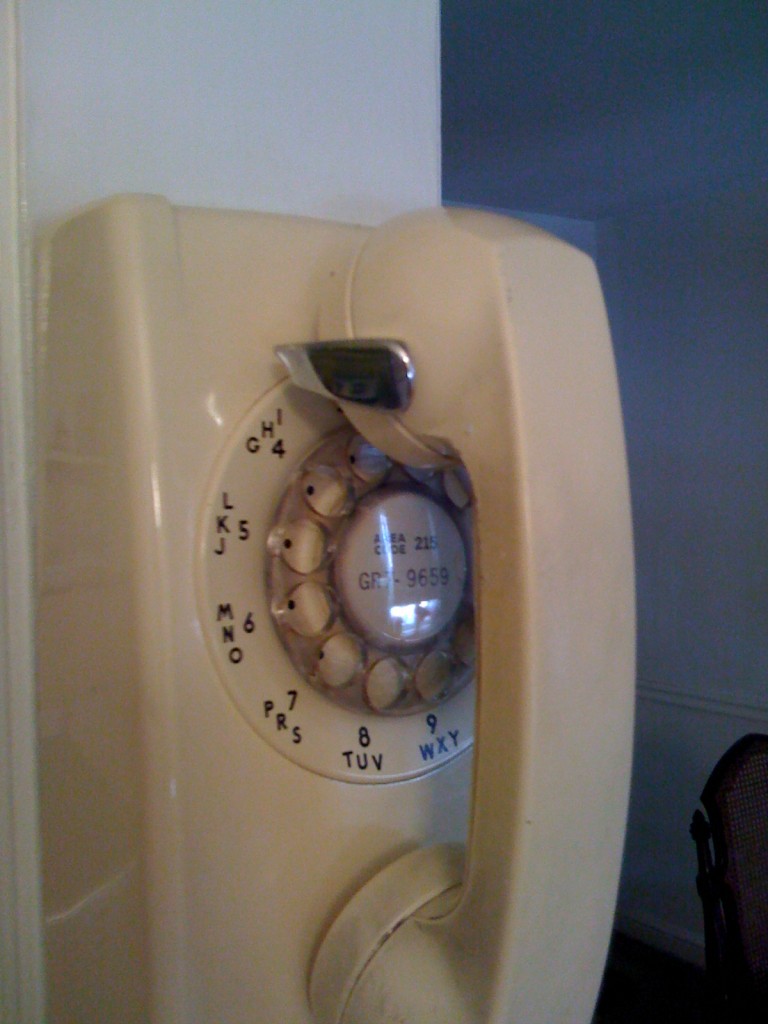 A photo of the rented phone my parents STILL have and use!

WOW. Is that a true visionary or what? He was imagining the currently reality of 2011, a world where texting, instant messaging over a computer, or chatting via a social networking Internet site have virtually replaced the need for a telephone. The younger generation relies more on electronic communication than on spoken communication via a telephone at any rate, even if some of us oldies prefer the spoken voice.

I wrote two blogs in the past that seem more than fitting to replay a bit here given Steve Jobs untimely passing and the quote above which proved how prophetic he was.   Here’s one on my generations’ teenaged mode of communication excerpted below:  The other one on texting follows this one.

Communication – Teens trying to get in touch with friends was a near impossibility outside of school hours.

Telephones: Households generally had one wall phone in the kitchen (or one in the main living room instead) and one in the parent’s bedroom, both attached to a short cord, and Rotary Dialing Only – rather than push buttons. No cordless phones or cell phones. (For those too young to remember, rotary dials meant you had to spin a dial to the number you needed till it hit a metal stopper) With wall phones, you could walk exactly one foot from where the phone was and no more. (meaning no privacy for those “personal” calls like conversations with a boyfriend and definitely no multi-tasking)

For the more privileged teen – their own princess telephone in the bedroom, (some with their own telephone number line!) assuring privacy in conversations, but those conversations had to be carried out while on the bed, due to their being tethered to a short cord.
But the lack of privacy and ability to multi-task was a minor problem compared to the chances of actually reaching someone by phone– Read on.

Busy signals/No Call Waiting: Boyfriends (and other friends) trying to call you got repeated busy signals on their end of the line (an annoyingly loud beeping sound) if on your end, your sibling was tying up the phone with a long conversation with his/her friend, or your mom decided to have a gabfest with her mother. Friends or boyfriends could keep trying back to “maybe” reach you, but it could be hours of busy signals first. The more siblings, the less chance you had to get any real phone time in.

Reaching mom or dad to extend curfew or let them know where you were:You had to find a phone booth, no matter if you were in the middle of nowhere. Of course once you did find a phone booth to make that all-important call, you probably got a busy signal and couldn’t get through anyway, because they were probably on their line with the police to get a search team out on you.

No Answering Machines: If you weren’t home, in fact, if no one was home, there were no answering machines to take messages. That boy that finally called you after months of your wishing and hoping…. You’ll never know in a million years.

Remember, no computers so no emails or text messages either: Hand-written notes only. No wonder so many of us got in trouble for passing notes in school.

Typing: In the days before word processing was a possibility for the average person, I learned to type in high school on a manual typewriter, where I got blisters on my pinkies from trying to bear down hard enough on the key to register the letter I needed. I had to make corrections with a pink eraser – the kind with little brushes on the end. Corrective tape had yet to be refined enough to be used, and the same for white-out. When the electric typewriter came out shortly afterward, I thought I died and went to heaven even though corrections were still torturous. (Never As Simple As Hitting the Backspace Key.) Try typing long term papers with what was available to me –  at least half the time was spent on corrections. (Never mind the fact that our fingers didn’t fly over keyboards the way they do now with kids trained on keyboarding from early on)

And I wrote another one about the texting-instant messaging trend:

I read with interest a story that ran in the Chronicle on Sunday about teens texting. There was a whole list of problems attached to the bad habit, including injured thumbs, and sleep deprivation. I personally would be curious to see the research on how it is increasing attention difficulties.

It’s not just teens either. Young adults are in constant communication mode as well, either by Instant Messages or Texting. I understand that communication is important to people in these age groups but having a full conversation in staccato back-and-forth bursts of abbreviated language might spell doom for real communication skills (rather than tech devices) as these kids get older.

Even back when I was a pre-teen and teen, we communicated constantly, although it was a definite challenge with cord tethered rotary phones with no call waiting that we had back then. (Be sure to read the earlier blog about explaining technology when I was a teen to my own kids)

We wrote notes to each other in class because there was no such thing as cell phones or texting. Any given moment, there was something to say to a peer or friend, and we got the job done despite the primitive methods of communication. We weathered the embarrassment when the passed note got into the wrong hands. (not to mention detention if caught by the teacher)

Long phone conversations with friends led other friends to frustrating (hours of) busy signals  – possibly the most obnoxious sound of my youth. Just when you REALLY had to tell someone something, instead of a voice coming on at the other end of the phone, a loud BUZZ-BUZZ-BUZZ sound would be received.

Now voices are becoming completely obsolete. I even read about people asking for divorce via text message. If the pop culture sites are correct, Britney Spears did it this way.

What’s next? Will someone actually receive this message?

And will the person it’s addressed to text the answer?

But I do worry that real conversation is replaced with digital conversation– either IM’s, Facebook entries, or text messages. Many have asked before: Is the art of conversation dying in this digital age?