Collector Madness Runs in the Family

I spoke in a previous blog about the fact that I tend to have obsessions. (Hoarding old, sentimental stuff for example) The definition of the word Obsession in non-psychological terms is “the domination of one’s thoughts or feelings by a persistent idea, image, desire etc.”

The reason I defined it outside of psychological definitions is because when it is diagnosed as a psychological condition, if the object of obsession is not obtained, it causes anxiety. I don’t have the anxiety part of the equation, but I do obsess and have obsessions, mixed in with some compulsions. (mostly compulsions to BUY something)

As an small example if you wish to delve into my mind, many, many years ago when I was became a single mom, I had a regular vehicle, having given my ex-husband the big behemoth Suburban thinking I could not afford the gas to fill it. I drove the Suburban on carpool days as my children were in numerous carpools for private school and extra-curriculars. Now with my husband out of the household, I only had a regular vehicle on carpool days and did not have access to the Suburban. So I obsessed about my need for a van, yet I did not want to spend the money on a new car. I noticed every single van on the road, dreamt about vans, looked at van advertisements, asked friends about their vans, and thought of the luxury and convenience of a van for carpooling for what seemed like an eternity – several months, until I broke down and bought one.

As with most people who obsess or have compulsions, I  have several collections of “Things.” There are collectors of every sort out there – antique collectors, old toy collectors, baseball card collectors, music album collectors, comic book collectors, etc.  So it’s not THAT abnormal.

In the past I have collected miniatures, dolls, talking toys, and glass art with fervor. Most of this is in the past though I still collect clothes and shoes. 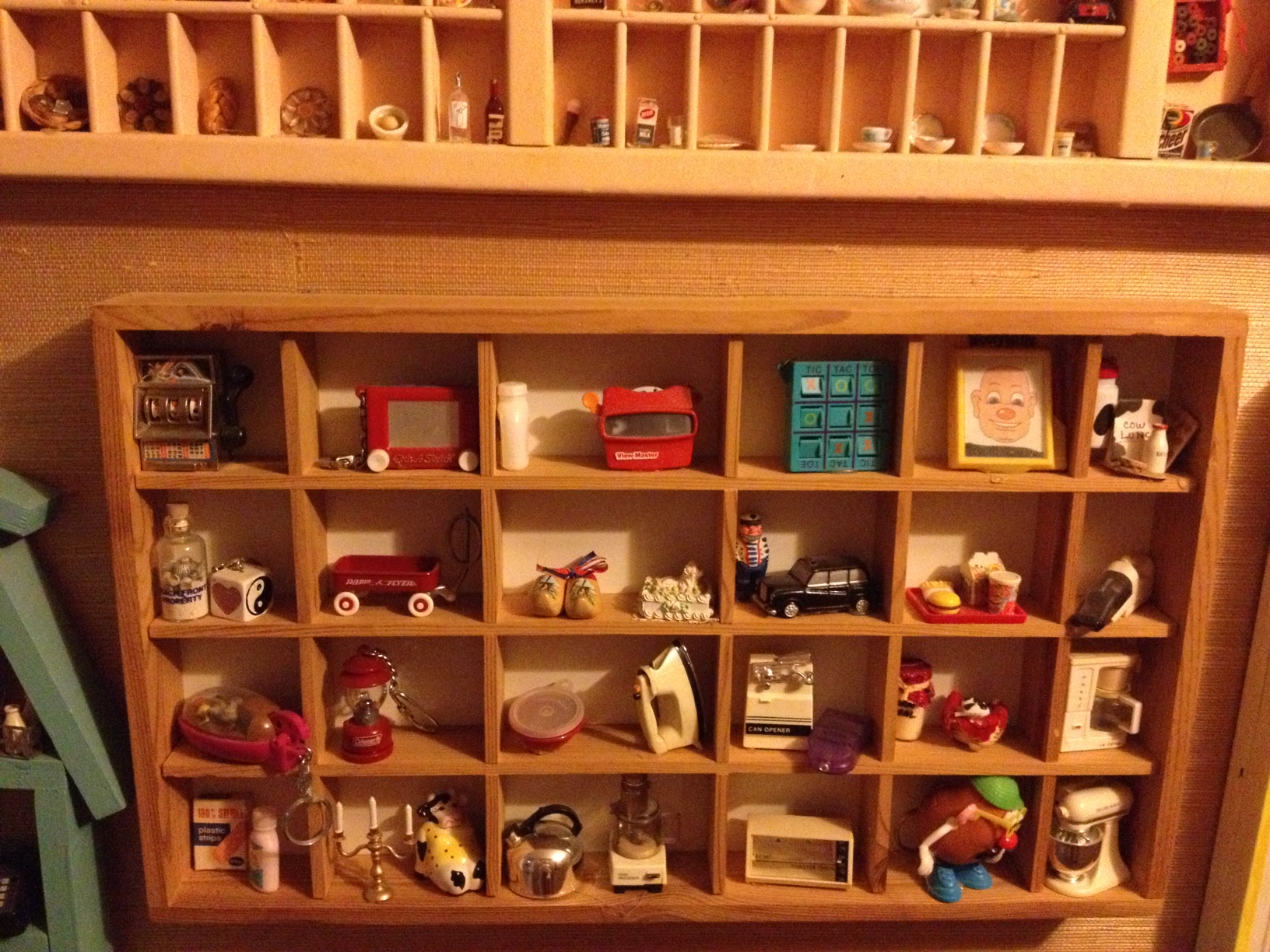 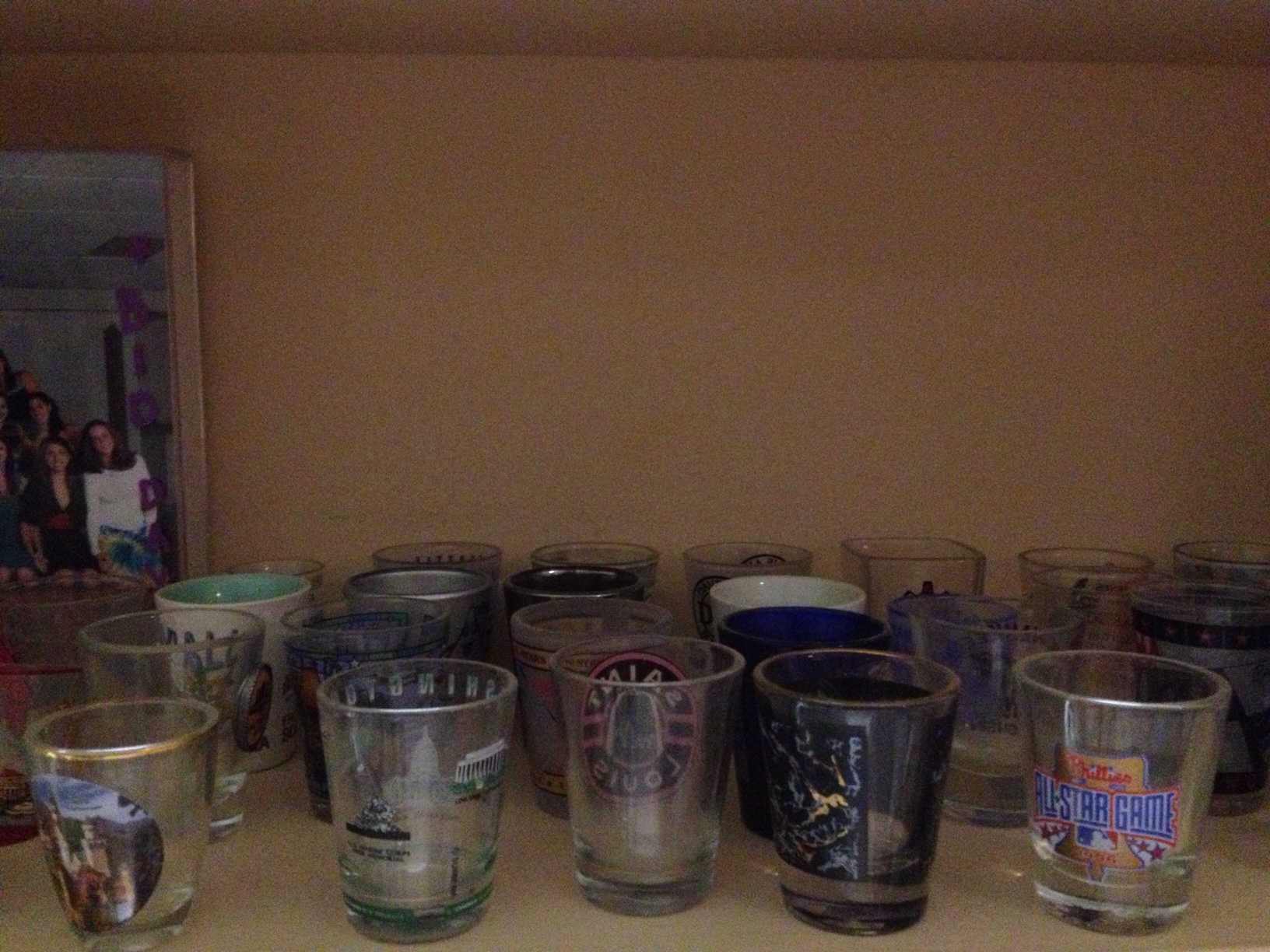 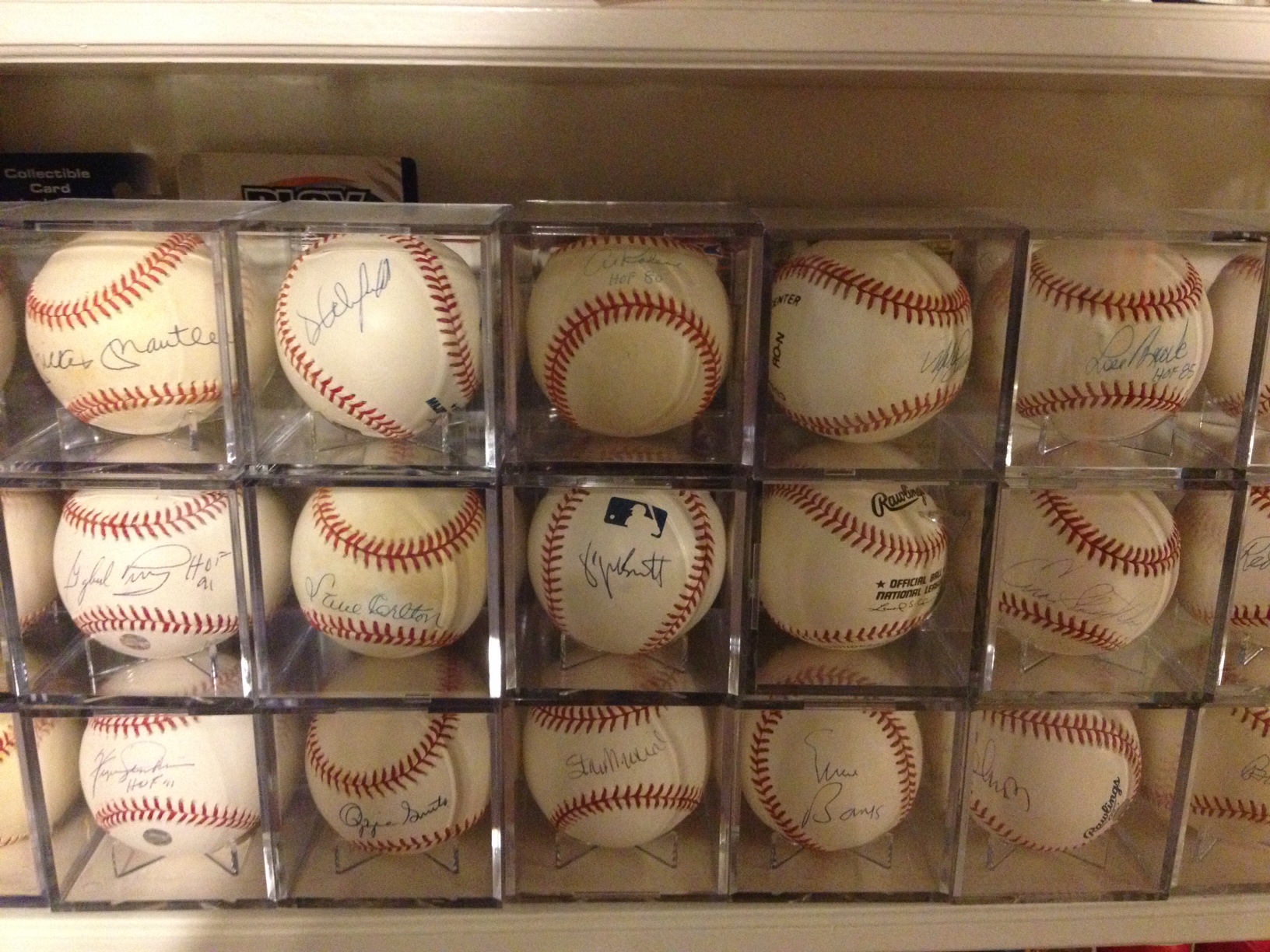 but first…My son Brett not only caught the collecting bug but he also acquired the obsessive personality trait from the gene pool. I can only blame myself for 50% of this though, as his father is also prone to this behavior. Brett has mostly outgrown his collection obsessions, but his room is still a shrine to his many phases.

As I detailed in a past birthday blog, Brett went through a phase of McDonalds – everything McDonalds from the food to the toys. Give him a Happy Meal and he was the happiest kid around.

When he was around 2 years old, his Happy Meal toy collection had to be lined up each night in his room before he would go to sleep. He would play with the toys during the day but had to have them lined up at night to go to sleep. (I guess to make sure they were all there.) A true obsession and compulsion. Curse you genetics!

Before we knew it, he had a massive collection of Happy Meal toys. And we soon realized, it wasn’t the food he loved, it was the toys. His father and I, being collector personalities ourselves, unfortunately enthusiastically  encouraged this behavior and discovered there was a whole world of McDonald’s toys collectibles, traders, publications, and it was a big business.

Brett’s savvy mom, (me) not wanting him to eat fast food exclusively, figured out that McDonalds allowed patrons to purchase the toy alone, without the food. They were also easy to pick up at garage sales.

Brett insisted for each series of toys that came out, tied to a theme or movie, that he had to have the entire, complete set. This required trips to multiple McDonalds locations on occasion. I thought it was adorable for some reason now unexplainable, and soon we were over-run with toys. Lucky though, we had a perfect home for collectors with tons of storage space and a huge playroom. In Brett’s early years of ages 2-5, we had a huge bookcase taking up an entire wall, where all of the series were on display in order. There was the McNugget people display, the Little Mermaid movie display, the Flintstone’s display etc. Every series that came out was lined up neatly.

I wrote about this to the local news and soon Brett – who was adorable with a very serious demeanor when it came to his collection –  was featured every few years as a celebrity on local news along with his massive collection and updates to his story. (Thanks Don Nelson) 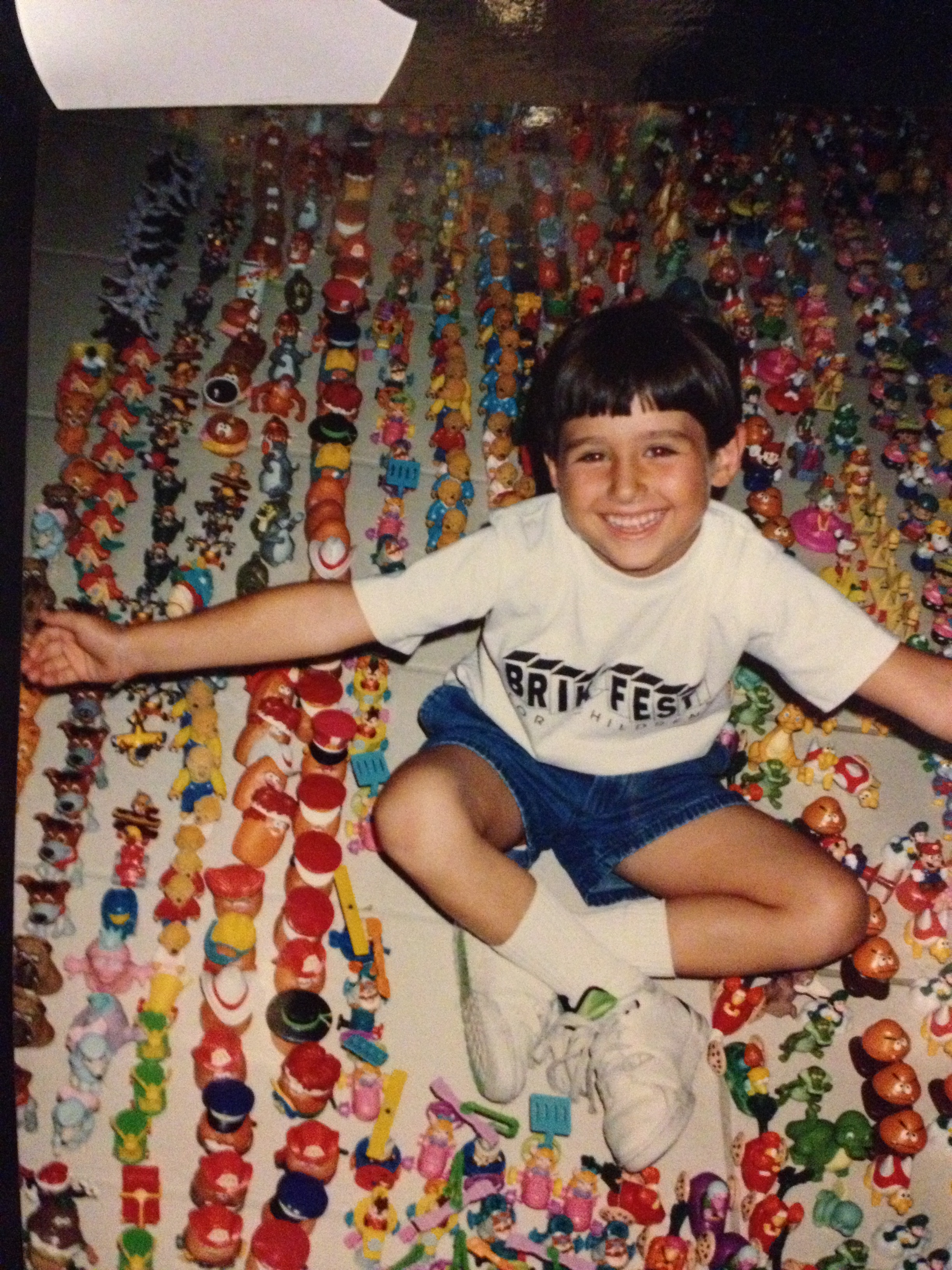 Around the ages of six and on, Brett didn’t feel the need to display them all, or play with them, and he was after mostly MIPS at that point.  Collecting MIPs is the hallmark of a serious collector. MIP stands for “Mint in Package” – the primo condition for a collectible of any kind. So the MIPS went into boxes and into storage. Fortunately, Brett eventually grew tired of it all and the obsession went away. No more news stories on Brett, the miniature crazed McDonalds collector.

We moved twice after that – both times to large homes with tons of storage space for serious collectors. (Do you detect a pattern here?)

In our current home, where we moved all the dozens and dozens of boxes of the McDonald’s toys and haven’t touched them in about 18 years, they are stored in a side storage compartment of our garage. It is actually a storage room with a door that I rarely go in because: it smells of mildrew, and it is home to mice and rats and roaches no matter how much we exterminate.

The boxes are sealed and have been untouched for years. The last time I looked at them, there was dust and  all kinds of mouse droppings on top of the boxes, along with a side of roach droppings. EWWWW. YUK.  I don’t want to go NEAR those boxes.

Here’s the quandary. I would love to get rid of the stuff, perhaps sell to another collector that would be thrilled with an almost complete 1985 to 1993 collection of the toys. As I said, many are even MIPS.

The only problem is that I would need a HAZMAT team to go in and fumigate the area first, and clean off the boxes and contents within. Don’t think those roaches and mice didn’t get inside the sealed boxes and I am sure their droppings are all over the place in all those boxes. The cost of that would be more than I would make on the sale I am sure.

I can’t just throw them away either. There is some sentimental attachment to the era and the actual zeal that we all had in acquiring the massive collection.

So I guess they will continue to sit around doing nothing until we move again, which if I have any say in the matter won’t be for another 30 years or so.