Cruisin’ Into the New Year

We just returned from a wonderful cruise that we so enjoyed despite some rain and non-stellar weather. We live an hour away from a major cruise port so we can drive right to the ship in about an hour. How cool is that?

We are middle aged and proud of it, meaning that we thoroughly enjoy a vacation where you just float, eat, get entertained nightly, and eat. (Did I mention eat?)

There are some people that are bound and determined NOT to cruise. Like it is some bourgeois or middle-age to senior activity. Some are worried about sea-sickness, and for those in that category, let me just explain that a mega-sized hotel floating in the water does NOT cause motion sickness like it would on a fishing boat, or even mid-size sail or motor boat.

For us, it is the perfect getaway because you unpack exactly once, and get transported to other places without having to pack again or unpack again until it is time to go home.

You can leave your worries, your brain, (more on that later) and your everyday chores behind and get waited on hand and foot. Who doesn’t want that? Who doesn’t visualize that personal touch of being fanned in the warm air while being fed grapes? (Ok, maybe that last scenario was a bit of an exaggeration, but it is close to that feeling).

I must admit, it’s an eating marathon. This is spoken by a person who LOVES to eat – especially if the food is good.  (This is where you have to be careful not to pick a cruise-line with bad food).

I love to dance and it is a rare event that gives me the opportunity (other than the weddings we get invited to) to really cut a rug.

I love games, playing trivia, soaking up the sun, and eating. This is why a cruise is perfect for me.

In fact, not only do we usually bond with the entertainment staff due to our high participation in just about every event, we bring home trophies that we are unreasonably proud of, as cheap and goofy as they might be.

This cruise, we really fell in love with the entertainment staff. It was a good looking young bunch of very funny, friendly, and spirited kids just out of college. We made sure to get their life story and offer some maternal/paternal bonding for those we interacted with frequently. There was Steven from Marietta, Georgia, who was in a relationship with adorable Gina, the tiny dancer with a huge smile. There was Jersey Jessie, who was such a Jersey shore type character, and cutie Kevin, who loves the musical Cats beyond reason.

About leaving my brain at home: Speaking as a former person who could beat anyone in Trivial Pursuit and the like games, I found on this trip during the trivia games that my long term memory is great (as detailed in this blog) and that my short term memory (late 80’s on) is just not working any more. There was sooo much stuff I USED to know, but no longer have it within my brain grasp. Goodbye unbeatable trivia champion, hello old brain.

For example, I used to know who sang Tubthumping and Tainted Love, but I could not recall in my trivia play. Thank goodness one contest was TV theme songs from the 60’s (got 20 out of 20 right) and one contest was on music of the 1970’s, another one I won. My husband won one too (Silly Law trivia) and a free throw basketball contest. Here are two of the four trophies we won – which the staff lovingly refers to as “Pieces of Ship on a Stick.” (medals not pictured but we won those too) 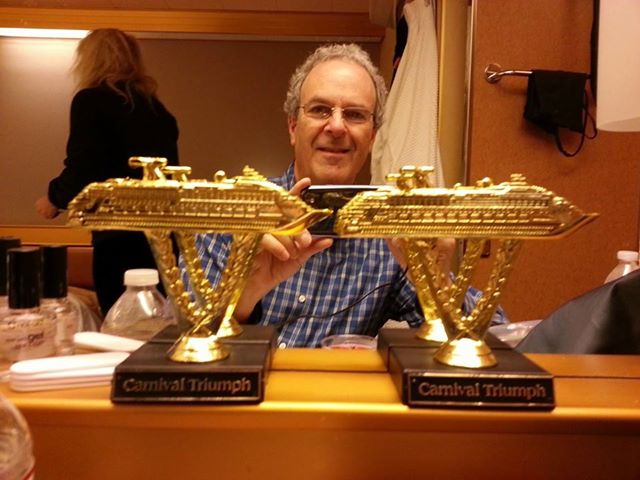 Fortunately, we teamed up with young college students for the four-day running trivia tournament and won that contest too, for major bragging rights on the cruise. 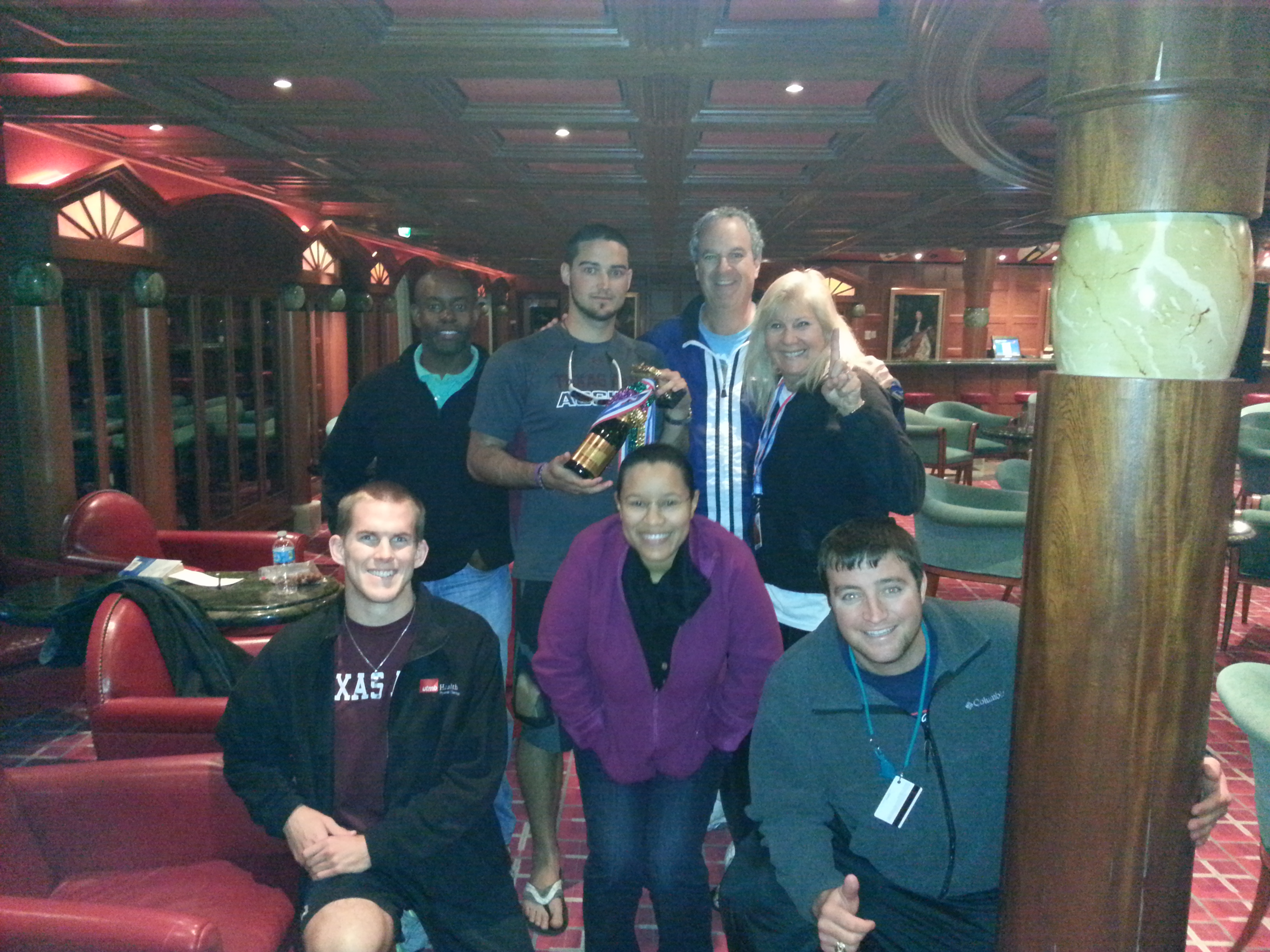 One thing we don’t do is stay in our room. We don’t sleep in. Why would we be in our room when there is great musical entertainment going on from early to late all over the boat? There was a piano sing-along bar, a non-stop Karaoke time, and several other performers in the lobby and on the casino deck.

The entertainment nightly was in the form of a Las Vegas quality show, one magic, one comedy and song and dance, and the other musical tributes. The costumes were lavish, the music great, and the performers very talented.

We love to laugh and there are a million laughs, from entertainment, to clever quips and skits, to hosts with a great sense of humor.

We are such old fogies, we even played Bingo two times. My husband splurged on the last big $1000. jackpot and bought TWO cards, one for him to play and one for me to play. And guess what? We won the jackpot! (But had to share the pot with one other winner) This is the only gambling we did, but lots of people amuse themselves for good periods of time in the casino. 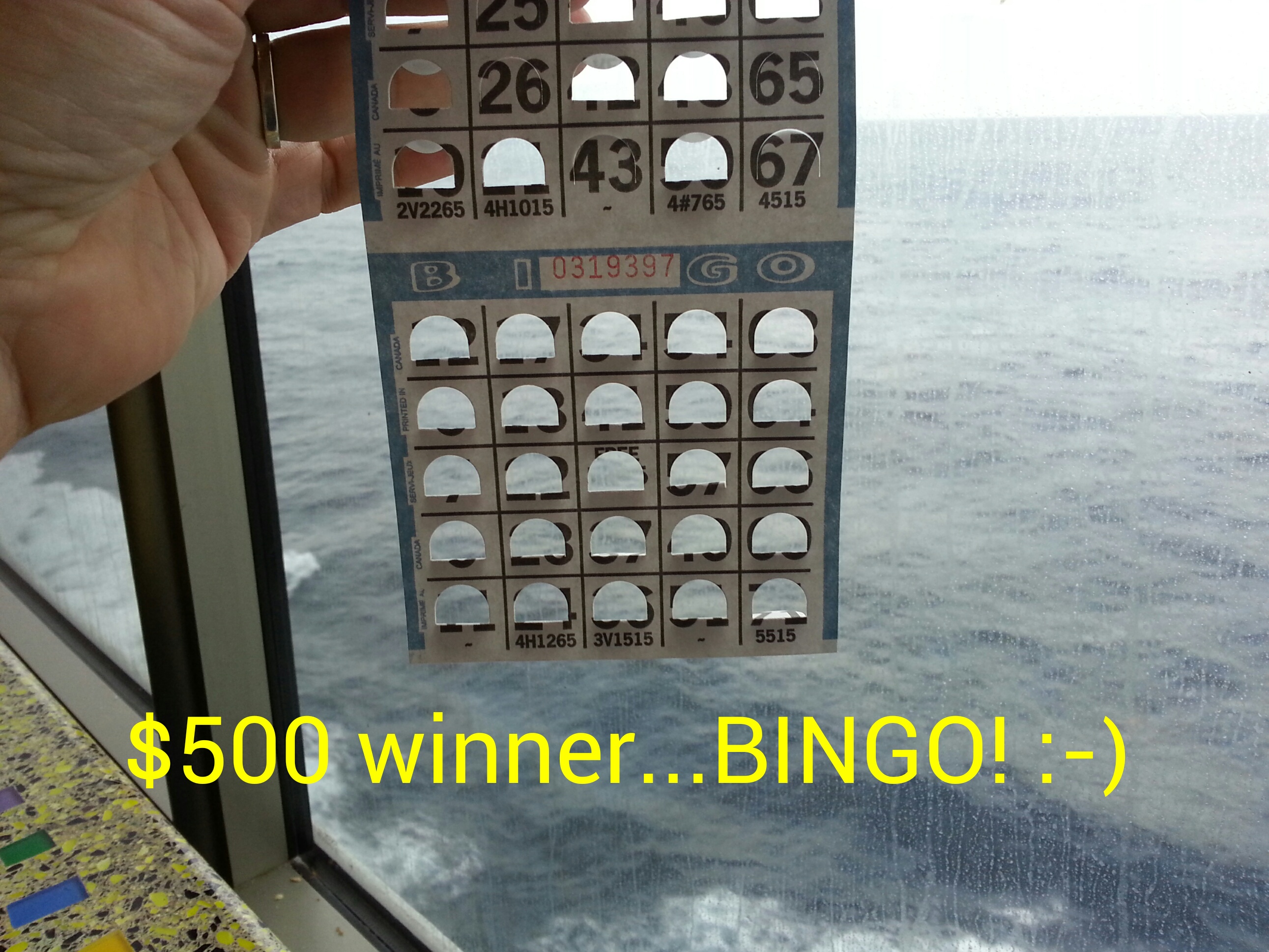 There’s a spa on-board and you can get massages, mani-pedis, take a steam or sauna, and work out.

In other words, there is something for everyone, plus the promise of some beach time in tropical places. And did I mention the eating? You can leave life and the internet behind, unless you are Gary Lassin and wait for a beach place with free WIFI. 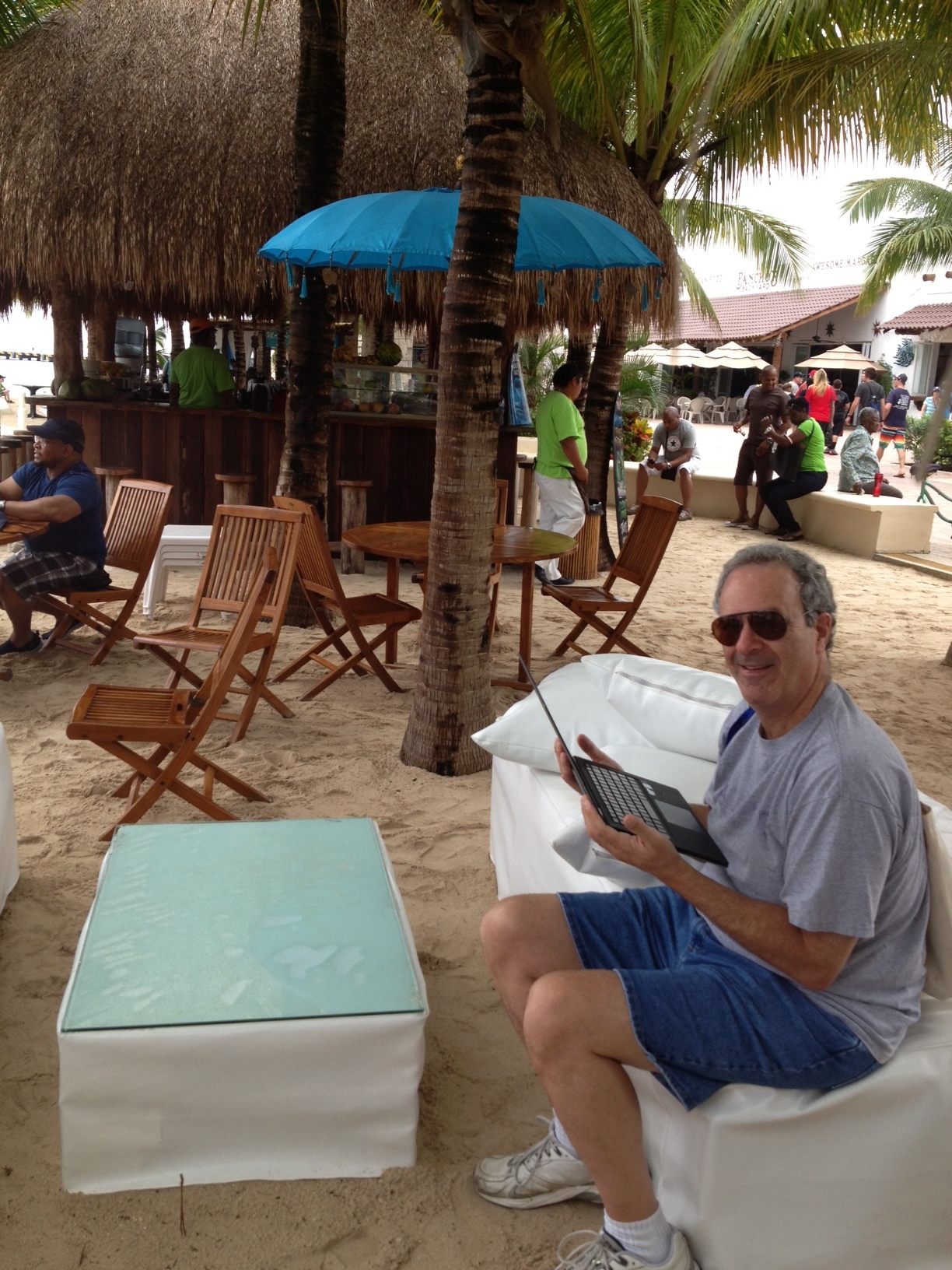 Dinners involved 8 course meals if you wanted to do that. You are served elegantly each time. Lunches are more casual, and served through a great span of time so if you want little snacks or even two lunches, it is ready and waiting for you. If you want an afternoon sweet, there is a soft-serve ice-cream machine and cookies waiting for you. Breakfasts are elegant too – in the dining room with china and many courses. 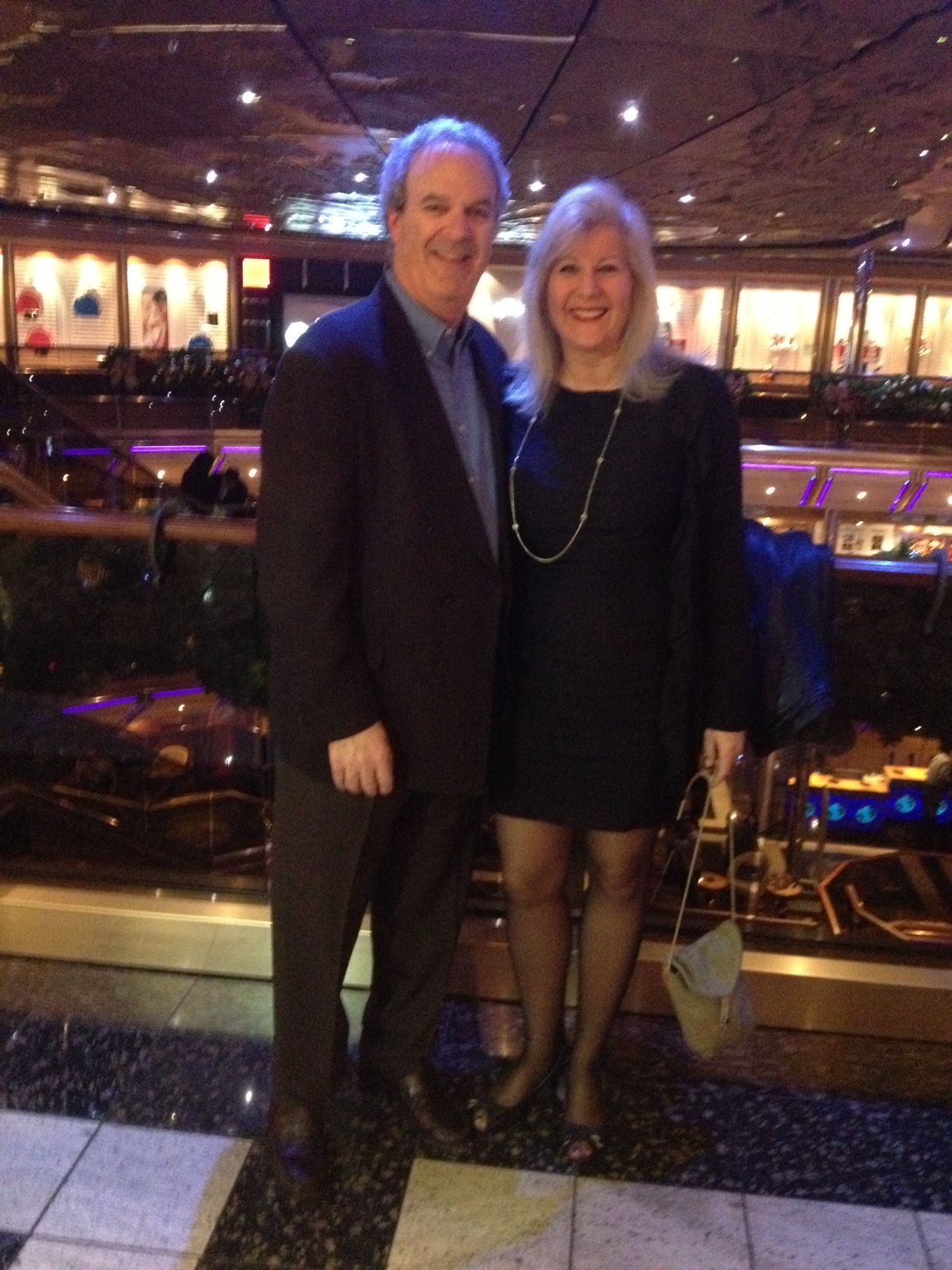 It is way too many opportunities to eat, and therefore too much eating, but for me, this is a good thing. It appears they eliminated the midnight buffet, but I never ate at those so I didn’t miss them. (I do draw the line on one million calories each day)

I like mardi-gras beads being thrown at me, and a several hundred person conga line dancing to a beat.

New Year’s Eve is a brilliant time to go. You can drink, dance, party, and be entertained after fine dining, and then just stumble exhausted into your room. Being on the Lido deck for the count-down to New Years was wild and fun, kind of like being in Times Square, with all  3000 passengers, and most of the crew up there. It was great to be a part of it. 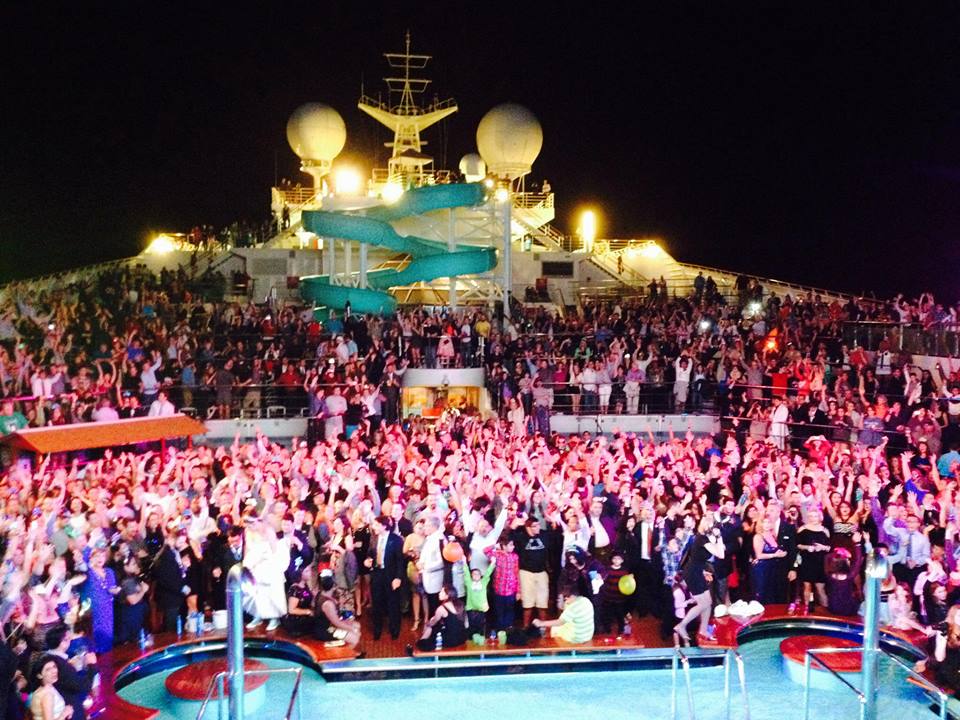 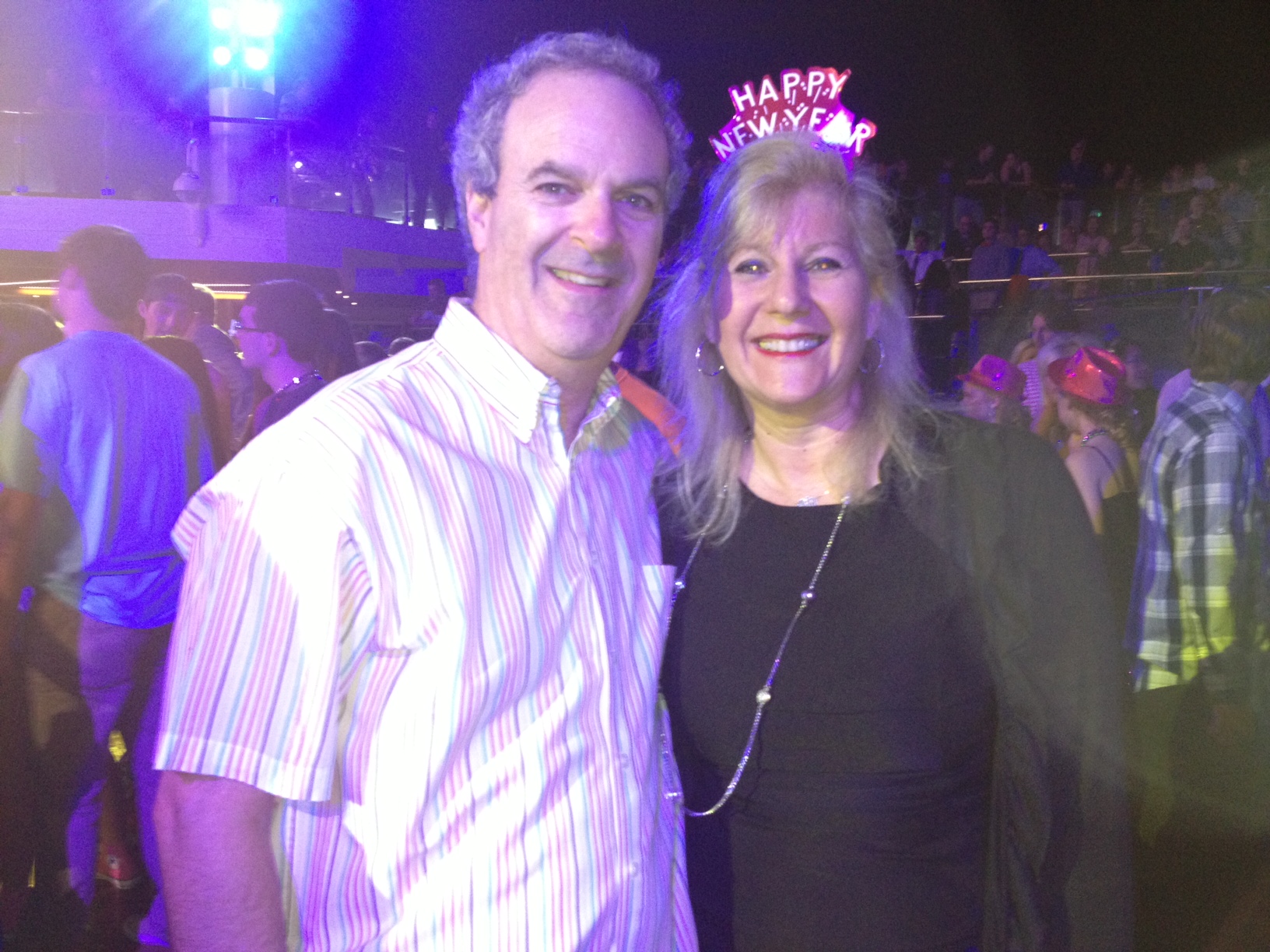 Call me an old fogey, but this is my idea of a good time. I am an overgrown kid and I still like to have my fun. So that’s why it works so well for me. I come back both rested, and exhilarated. And with a whole extra amount of body weight.

In other words, if you have never tried this type of vacation, I urge you to give it a try. As for me, can’t wait for the next one.