Ok, you all know all about the Little Black dress and how I was able to pull it off for the big event successfully. But now on to talk about the actual reunion.

I have been to every high school reunion my school has had except my 10th. Perhaps I do that to keep in touch with my roots. I have lived 1600 miles away from my city of birth for 31 years and so I long to reconnect with that part of my life.

This one was a particularly sentimental one because we started our reunion weekend by revisiting our High School at an alumni assembly. Yes, the same auditorium where we ignored everything going on and hurt our rears with the rock hard seats hadn’t changed a bit except we all had more padding to protect us from the rock hard seats. 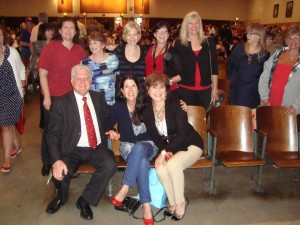 My particular class has a reunion every ten years, except we did have a 20th, 25th and 30th.
I am still trying to get over the difference from my 25th to this recent one, my 40th. (In case you want to read my blog reflections written after my 25th, click here – it is dripping with sarcasm)
It was told to many of us who attended our 40th (around 250 out of a class of 1260) that some of our classmates who we specifically asked for to come didn’t come because they didn’t want people to see a whole list of things about them such as: weight gain, aging, balding, or hear about a business loss, a divorce etc. Others said that they see all the people they want to see, so why come?
I guess that kind of thinking is for those that is for those who didn’t stray far from their roots- that are likely to live in an area swarming with people from our past who they can just bump into in the grocery store or where ever.
That is really sad because they missed out on a total love-fest. We are finally old enough, mature enough, and sentimental enough where all of the previous BS just doesn’t matter. No one cared who was popular, who was a nerd or geek, who was cute, or well dressed. There was just happiness, joy, surprise and camaraderie. People met and got to know people who they never gave a second glance to before, and found they liked each other! Shy people came out of their shells as adults. It was a wonder to behold. There were very few cliques this year – groups of old friends sat at tables together to eat, but that time was brief and EVERYONE mingled! 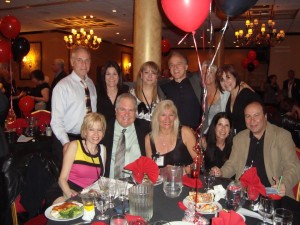 There was still the recognition factor to deal with but we easily read the LARGE PRINT (nice touch committee chairs by the way) ID tags, and all across the room, you could hear yelps, screeches, squeals and screams as old friends and acquaintances were found. In fact, this expression was actually used: “I know I know you – who are you?” 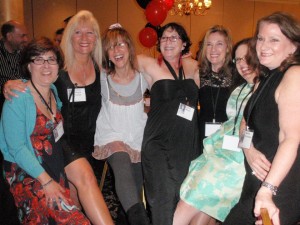 Some of my classmates from as far back as elementary school who had not shown up to any reunion before made appearances at this one, and it was so cool to chat (after the above recognition issue was solved) about those youthful, carefree days of kindergarten through sixth grade. It was like our entire neighborhood got together once again.
I even got to spend a bit of “misty water-colored memories of the way we were” with an ex and it was sweetly sentimental. 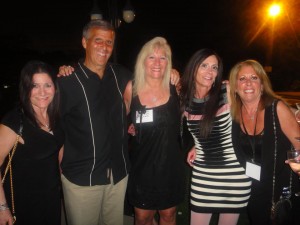 Because the time just whizzed by in a flash, there wasn’t time to get to EVERY person.
In fact, one guy I haven’t seen or heard from since Jr. High saw me on the dance floor and danced up to me and said, “Someone told me you are Arlene Nisson.” I recognized him right away, even without a name tag. For emphasis because it was kind of a weird approach,  I looked my own name tag and then answered him, “Yep! I am Arlene Nisson.”  He seemed absolutely stunned that a mousy-brown-haired, geeky, brace-face, skinny string-bean could turn into a regular looking human woman with cleavage- and a blonde no less. He then asked, “Do you know who I am?” Not missing a beat of my own dancing, I answered his correct name, and again he seemed stunned and amused, and danced off in another direction, smiling. That was the sum-total of our re-connection, but it was memorable. And happy.
Thank goodness I didn’t have to give him the “Ugly duckling always turns into the beautiful swan” punchline, but believe me, it was used several times over the course of this reunion when guys who had me frozen in time to my most gawky, awkward, pre-puberty looks were shocked at my transformation. (They didn’t notice me in HS or college obviously.)
NO PLASTIC SURGERY was another refrain I used often! (and that is the truth!)
My dear friend Pattie who I stayed close with is also now a blonde. After they checked out her name tag with her yearbook photo, they yelped “Pattie the cheerleader!.”
I had to then set the record straight. “Not just cheerleader, but Assistant Captain!”
In fact, there were dozens of us former brunettes who are now blond or blond-ish. Dozens! Our name tags were the unfortunate high school yearbook mug shot. Name Tag: Brunette, Now In-Person: Blonde.
No wonder there was confusion. There were lots of gorgeous brunettes who stayed that way too I might add. 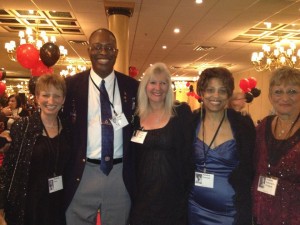 New blondes with Archie and Sandra F.
Sandra F. was frozen in time gorgeous as were many others who looked liked they could have graduated yesterday.Others transformed quite a bit, but it was delightful to see the new look. The best part about it was that no one focused on trivial things like looks or dress as we were notorious for doing in High School. We saw the PERSON this time. Maybe that’s what made it so very special. 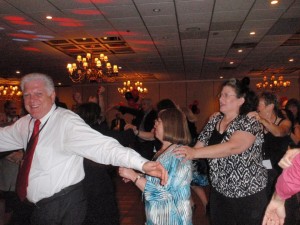 Jackie, our dear classmate who lives in Israel, came in for the Reunion and we danced a rousing hora in her honor. Such fun! Such joy! (There were a LOT of Joys there too!) 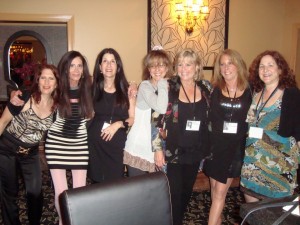 I can’t quite describe all of the wonderful feelings of the evening as you had to be there, but as a few summed up, it was magical.

We saw the fleeting of our youth in a positive way (could it have been 40 years ago?) , and now as we are staring down the end of our middle age years, we all came together in such a beautiful, bonded way.
What’s more – we can’t wait for the next one! If you were there or experienced one recently, add your thoughts!
8
Uncategorized