The Gifts My Matriarch Gave Me That Keep Giving

My paternal grandmother, Eva, (of blessed memory, a true Eshet Chayil- Hebrew for a Woman of Valor) who we affectionately referred to as “Gram” was the matriarch of our family. She was an extreme of the term Balabusta – a yiddish term meaning a top quality homemaker and cook- and she was a gatherer. It was no problem for her to host all of the family holiday meals through the years, even if she spent a week preparing all the wonderful dishes. To her, this was how she expressed her love, and her talents. There was always a place for whoever came, and she was non-ruffled by lots of hungry guests. She loved cooking and baking, and yes, she loved family and people in general.

When I got Gram’s family history after she passed away, from her daughter, and my aunt, Doris (may she rest in peace – another Eshet Chayil and who took over the Matriarch role when Gram passed away) I found out that she descended from a long line of Jewish food caterers. So it is easy to see why her food was always delicious and plentiful.

When I moved to Houston, Gram passed the torch on to me, because although she was still alive, she was slowing down a bit and I was too far away to be part of family holiday celebrations.

NOTE HERE: I do not understand friends and acquaintances in my era who refuse to take the torch handed to them to be the matriarch and gatherer of their families. We are the generation to keep our traditions going, and then we can pass it to our children’s generation eventually. It’s really up to us, not our elderly parents, and certainly it should not die with our deceased grandparents and parents. When I hear someone whine, “I miss my Bubby’s holiday meals,” I want to yell back, “What is stopping you from continuing them??!!”

Back to my own matriarch, my Gram, with baby steps, she encouraged me towards becoming a matriarch and a balabusta — to my family and friends in Houston. I reviewed her recipes and secrets for yummy holiday and baked fare – never written – but shown or told verbally, with her over long phone conversations.

With even my very first Rosh Hashanah in Houston in 1981, I was newly married, and hosted a small gathering of friends with traditional dishes including a kugel. My then husband was truly impressed as were my invited friends. I thought to myself, “I can DO this.” “I can be a matriarch, a gatherer, a cook of great Jewish holiday foods and a baker too, just as my Gram was.” And so that’s what I became – for friends and for my own children.

I grew up in Gram’s kitchen. She lived exactly one block away from us, and often I spent lunch times at her home, or after school time, especially when my mom went back to work. There was always something on her stove or in her oven, a delicious soup in the winter, and other great dishes. My first cousin – who lived exactly two blocks from me, and one block from our shared Gram –loves these hearty soups with meat in them to this day, as do I, and although I haven’t tried to make them, the memory of their taste stays fresh. We never hesitate to order them in a Jewish deli – cabbage soup with meat, or pea soup with meat, or even mushroom barley soup with meat were my favorites. Oh and those soup bones!

Although Gram never taught me how to cook, I learned from being with her, watching her, and through osmosis. Fortunately the genetic component, given to me as a true gift, as an excellent Jewish cook and baker, was there all along.

Gram left other gifts for me too. She was a beach babe, who loved to visit our beach town outside of Philadelphia, always renting a spot, and spending long days on the beach. I am just like her and now have my own beach place in that same area of New Jersey so I can emulate her.

She left me her beautiful Hebrew name, Chava (Eve in Hebrew) to give to my daughter Elissa. (Elissa’s Hebrew name is Chava.) In fact, Elissa’s name has a wonderful combination of my Gram’s first name, Eva (with the first E and last A, and the I-S-S in the middle is in tribute to Gram’s married name of Nisson. She left my daughter her tendency to freckle in the sun, something I do not do, but Elissa, Gram’s namesake, does this in the exact spots on her face that Gram did.

She taught me how to sew – not from patterns (I did not do well with those in school Home Ec.) but to mend, both on a sewing machine and by hand. She taught me little mending tricks, that I still use. In fact, my husband Gary was super impressed with this ability when I was able to repair his drawstring shorts in a semi-complicated technique. I thought of Gram the entire time I was working with needle and thread.

She modeled how to be a leader for me. I must say, this is one of the things I am most proud to emulate in her. She was a leader of various Jewish organizations, and I have her little jewelry heirloom pieces passed down to me that honored her after she served. I too have served my fair share of leadership positions and now serve in a leadership capacity as my career as well. Her qualities that made her a good leader was passed onto me, and I have passed them onto my daughter, Elissa, her namesake, and who was recently featured in the Dallas newspaper for being a rising young Jewish leader. When it came out, I told Elissa I was going to pass on Gram’s leadership gifts (jewelry) to her because she is the living essence of my beloved grandmother. See article below…

Gram was also a people collector and had a billion friends, as did her only daughter, Aunt Doris, and as I am fortunate enough to have in my own adult life. Again, Gram was a gatherer, and she modeled being a good friend for me through good times and bad, through the years. This is the ultimate gift as I enjoy my wonderful friends and treat them like extended family, just as my Gram did.

Finally, Gram loved a card game and Mah Jongg. Again, this trait was passed on to me, either through modeling or genetics, or both, and I love to do both. In college, I enjoyed playing Pinochle, and have suggested to friends to take it up again. I am playing in a regular game of Mah Jongg, and I see Gram smiling down on me when I play.

As you can see, none of the above (aside from the jewelry) were tangible gifts, but they are gifts nonetheless, more priceless and precious gifts than tangible ones ever could be to me. They are my Gram’s gifts to me, and yes, they keep on giving.

I emulate my Gram in so many ways, and I just know she somehow is aware of who I have become – a chip off the old block. She was tremendously proud of the young woman I became and we kept a close relationship despite our physical distance up until I was 31, when she passed away right before my Elissa was born.

Below are some photos of the wonderful woman, Eva Nisson, aka “Gram.”

The above is Gram as a young woman with my Pop, her husband. 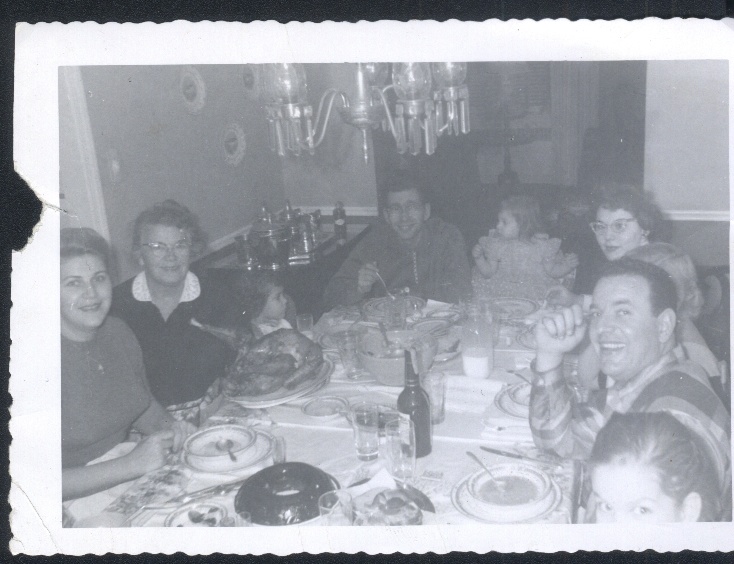 Here’s one of our family meals at Gram’s – from Left is my Aunt Doris, then Gram, and I am at the 12 o’clock position at the top next to my Dad, Milt. My mom and uncle and cousins are the rest. 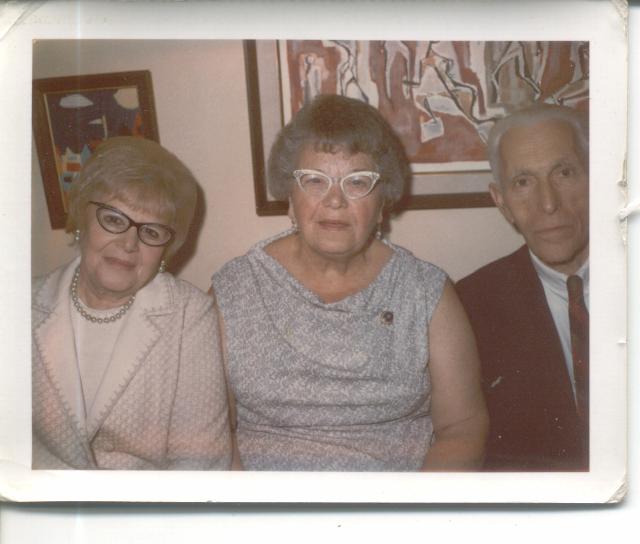 The above is my Gram in the center with her sister, my great Aunt Rose, and my Pop. 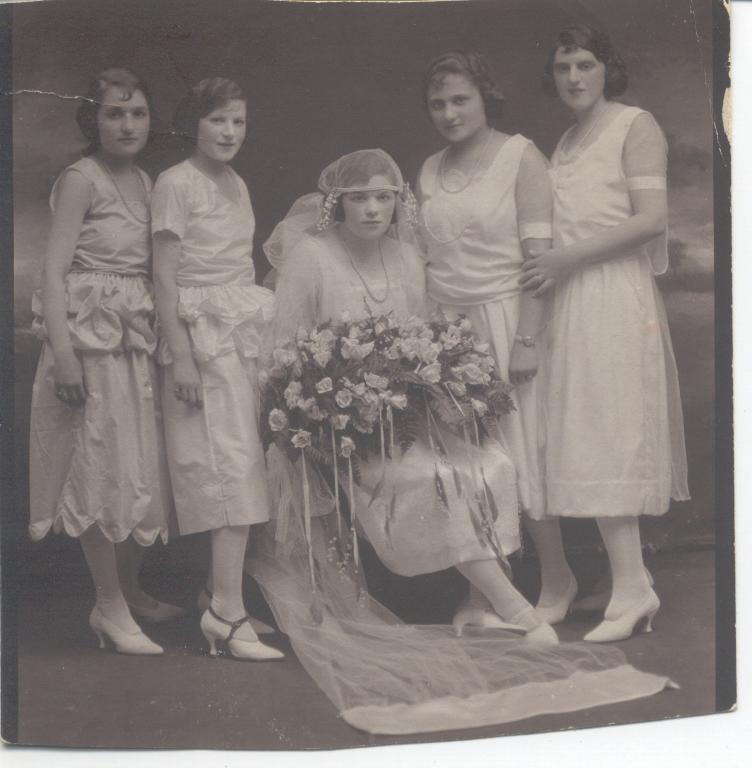 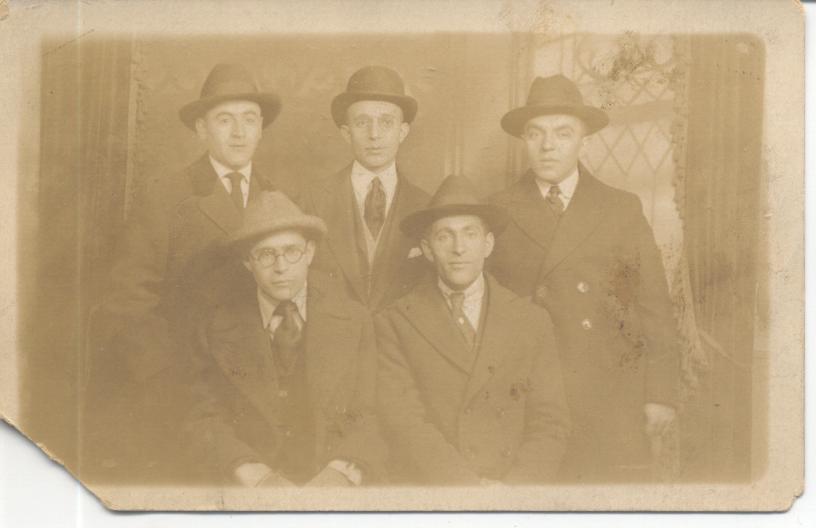 The above is my grandfather, Pop, (first row right) who married Eva and was the love of her life, with his brothers and with Gram’s father to the upper right. Pop’s brother to his right (first row left) looks just like my dad. 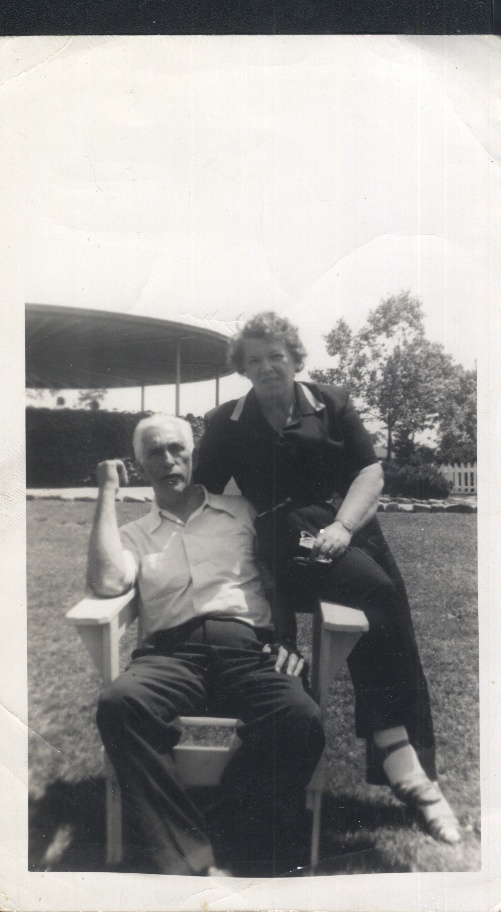 I love the above photo. It was my grandparent’s first visit to Israel, a place they loved dearly. I love my Gram’s stylish pants outfit. My love of Israel stems from their various visits there.