How To Decide When to Kill Your Dog (Euthanize)

Okay, the above title is a bit dramatic and not exactly correct, but I am still feeling very emotional over having to put my 15 1/2 year old toy poodle Doodles to sleep the other day.

Doodle’s vital signs remained completely healthy. The Vet on his last checkup remarked how he appeared and presented as a much younger dog from the physical. (other than arthritis)

Yet a dog can be perfectly healthy internally, but wracked with pain and crippled with arthritis. There is no ibuprofen, no pain meds given to an arthritic dog. When brought to a chiropractic vet and/or an acupuncturist, they explained that Doodles had no cartilage left and his bones were rubbing against bone.

And the bad part is that if a dog that is eating well, going to do his business well several times a day, and internally healthy, it does not generate thoughts of ending his life.

So as he became debilitated and in obvious pain, we kept finding holistic solutions and finally an injection called Adequan that brought him some relief. Doodles remained inactive, displaying more or less the same activity level as your basic throw pillow on the couch, but as long as he was eating well and greeting us, we knew he was ok to continue on. He spent nearly two years like this.

He had his ups and downs and I was constantly evaluating the quality of his life to see if it was “time.”

He would arise each day with us, go out back and come back to the door, barking to be let in. He would wait for his morning pets and strokes from me, and then go to his water dish, and then go to the couch to assume his regular position. Each day at 2-3 pm, he would bark for a walk. His walks got shorter and shorter to just a few hundred feet. An hour after his walk, he would bark for his gourmet, home-made meal of chicken, carrots and rice. He would paw in his water bowl when he ran out of water and still participate in moving his mouth up and down as if to converse with us. The rest of the time, he was laying down, with eyes open or closed.

As pathetic as the above sounds for a quality of life, it was enough to keep him going. We brought him on a road trip just three weeks ago to our friends’ country home, and bless his good natured heart, he tolerated the trip quite well and walked a bit on the property. (Another friend later remarked her surprise that we put him to sleep when he seemed fine at the country home- they were also visiting at the same time)

As we worried aloud about him to another set of friends, our friend Neil related a bad experience with waiting too long to put a dog down. He encouraged us to do the right thing by Doodles.

The only problem with the above, is how does an average person know when to do the right thing and put the dog to sleep? (killing)

I personally struggled over this. I knew Doodles had a minimally passable life at this point. I was trying not to be selfish. I looked deep in his eyes every day to search for an answer. Was he in pain? Did he want to go on? I was hoping he would die on his own rather than having to make that horrible decision, but found out dogs rarely do this.

I wondered what Doodles would say if I asked him. Would he have requested it two years ago when the quality of his life took a major downturn after the arthritis became really bad? Would he have wished for it while depressed and grieving after his sister Pebbles died? He sure seemed like he wished for it then. It seemed to suck the life out of him and he became aged after that.

Last week, Doodles stopped eating his regular quantity of food. He had little appetite. He wasn’t walking well. He stopped getting up to greet a bit when we came in. My husband gave him a new shot of Adequan which would usually perk him back up, only this time it did not. My husband announced that Doodles was fading. I didn’t want to believe it because Doodles had made so many comebacks in the past two years. And a few days later, Doodles stopped walking and stopped eating altogether.

I didn’t want to hear it or see it either, but after two days of not eating, there was no denying it. Our friend Neil’s words kept ringing in my ears. I looked deep in Doodles eyes and all I saw was tortured discomfort and pain, and weariness.  I gave him lots of ear scratches – his favorite thing. He seemed so fragile, as he had already started losing weight and was getting bonier. Somehow, he still appreciated those ear scratches that last night, and that was all to the quality of life he could enjoy at that time.

I knew in my heart of hearts it was time to let him go.  And yet I felt guilty for choosing to take him out of his earthly life. I felt guiltier letting him go on perhaps a weekend or maybe a week too long.

Such is the wrenching decision to say goodbye to your faithful companion of so many years. Despite the above guilt, once I came to that awful decision, I knew we made the right decision. Rest in peace my sweet Doodles Poodle. He is now reunited with his beloved sister Pebbles. (Photos below)
Click here to read my blog about Pebbles the entertainer. 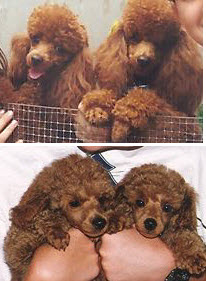