You must know about my meticulous, engineering-type husband, who is the opposite of me and my personality in so many ways, because you HAD to have read my previous episodes of Husband Follies or at least an occasional blog post.

Therefore, I am cutting right to the chase on this one. Several weeks ago, my husband hurled a four letter word at me, and not only is he is NOT taking it back, he is using it with all of the engineering earnestness as he does most things in life.

The word, of course, is DIET.

As in LOW CARB diet. An even more loathsome set of words.

His goal, at all 6 ft 1 inch of him, is to weigh 185 pounds by our son’s wedding next September. (Shout out congrats to Adam and Jess who motivated this!)

Trust me, he is going to make that mark way before the deadline at the rate he is going. He is shrinking before my eyes.

Back to the ugly words, low carb diet.

Without getting too dramatic, aside from my kids, Carbs are my Raison d’etre. I live for carbs, I thrive on carbs, and to be honest, I think I am deeply in love with carbohydrates, and just wish that food type didn’t have such a chemical sounding name. A sexier name like Colin or Michael (Firth, Buble of course) would seal the deal. Or maybe I am just addicted. All I know is that I wouldn’t want to live in a world without my beloved carbs. 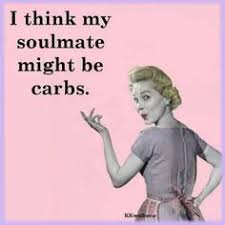 Carbohydrates you see, are chains of sugar molecules. For several years now, we have been told that SUGAR is the ENEMY. The thing that is causing cancer, heart disease, obesity, and all kinds of health issues. Certain carbs get processed in the body like sugar.

Sugar has always been my friend, and it is tough for me to look at something I like as being bad. We are now frenemies, I guess you could say. I know I shouldn’t like sugar and sweets as much as I do, so these days I approach with some degree of wariness and regret while I am, say, eating those peanut M&M’s.

And carbs, carbs! Especially the white bread, pasta beauty carbs. I am the type of person, who with all dignity, refinement, and of course sneakiness, can down an entire basket of Italian bread dunked in olive oil at any given restaurant. When dining with others, it is usually gone while they are still conversing and I am discreetly stuffing my cheeks. I’ll tell you why I know I am discreet–the rest will look at the bread basket ready to take some and discover it is all gone. “What happened to all the bread?” they ask. And I play dumb. 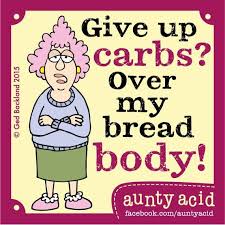 (While I am writing this, I am consuming more popcorn than the average person would be able to down at not one, not two, but three movies.)

I am the type of person who would not only eat dessert first, (and I have done that on many occasions) sometimes that’s the only course I eat for dinner. Just last night, my dinner was pumpkin pie with lots of whipped cream. (It’s Fall you know, pumpkin season, even though it is still in the 90’s in Houston so of course I had to have pumpkin pie.)

Well, before you judge, I was on the hot run and didn’t have time for anything else.

At any rate, I am certain that my husband would have liked for me to SUFFER with him, but no, I think I have been sympathy eating roughly the equivalent of every one of his non-used carbs each day. I didn’t want them to have abandonment issues.

Fortunately, I run around so much and maintain a healthy exercise schedule, that I probably won’t gain quite as much as he is losing, or let’s hope not.

So getting back to my geeky, engineering type husband, he did his thorough research before restricting carbs and then went shopping. Then he got an app on his phone where he painstakingly had to enter every calorie and carb he consumed each meal.

It was really annoying to sit with him while he did all this, including looking up foods he ordered if we were eating out. It made me want to flaunt and eat even more carbs during the meals. I would say this task could take him ten minutes to get through.

After a week of that, with the weight just peeling off his body, he thankfully gave up on the app, just about when I was going to give up eating with him. (He realized it was a ridiculous and far too complicated thing – but I could have told him that on his first use.)

Now he can calculate in his head what he is eating, what the values are, and take it from there. He is being super disciplined and I just hate that about him. I am rarely disciplined like that.

He’s been, of course, a bit cranky too. His temper has flared and I believe it is sugar withdrawal. But the doctor’s scale today revealed a weight lower than he’s had in many years.

So there you have it. Soon I will be squired around by a very meticulous, carb-calculating skinny noodle. Wait…Noodle, Oh Noodles, YUM. Looks like that’s what I will be having for dinner tonight!