In Defense of John Denver, and Fall ColorWonders

Posted on November 9, 2018 by arlene
If you read me regularly you know that I am the ultimate music fan and have been this way (with a transistor radio tethered to me) since the age of five. I loved the folk music of the early sixties- Peter Paul and Mary, groups like the Kingston Trio, The New Christy Minstrels, The Lovin Spoonful, The Mamas and Papas, and even The Byrds, and Crosby Stills and Nash, and most especially including folkies Simon and Garfunkle. I maintain that some of the most beautiful, pure voices came from folk music including Judy Collins and Joan Baez. In fact, when I went to overnight camp in the sixties, the only songs we would sing around the campfire, besides camp songs, were folk tunes. I liked this genre so much, I suffered through a PBS retrospective a time or two when they brought back the wonderful harmonies and folk groups for fundraising campaigns. Oh Tom Dooley!
Surf music and British rock came and usurped that whole folk movement until the early seventies, but a LOT of early rock music came from folk music roots. Hello, Bob Dylan.
While harder rock came during the later sixties, folk music sort of fell under the radar with some exceptions. And then, by the early seventies it seems to re-emerge, with folkies like Joni Mitchell, James Taylor, Carol King, Harry Chapin and Dan Fogelberg who were big stars, and I was loving that.
While the above singers were cool, there was one more folkie who emerged at that time- but since there was a bit of a country edge to some of his tunes, it was uncool for me to be a fan of his according to my college buddies. He was mocked relentlessly by my crowd even though he had the voice of an angel and his mellow folkie songs were hauntingly beautiful. I am speaking of course of John Denver.
I loved him and his songs, had an album or two of his, and I was mocked mercilessly at college for liking him. I never understood why it was okay to have James Taylor albums, Joni Mitchell albums, but not John Denver albums. Yet this was the case.
Though I was also into album rock at this time of my life with groups like Led Zepplin and the Moody Blues in that college era, I also loved my nerdy folkie music guy John Denver.
In fact, it was so uncool to like John Denver, I was a “closet” fan. It was so important to be cool in college, and I went with the album rock favorites of my friends out in the open, but played John Denver in my own private space.
I remember that so vividly that when I went to write this blog, and I did a bit of research on him, I was shocked at the Wikipedia page first paragraph, which contains this tidbit:
“Starting in the 1970s, he was one of the most popular acoustic artists of the decade and one of its best-selling artists. By 1974, he was firmly established as one of America’s best-selling performers, and AllMusic has described Denver as ‘among the most beloved entertainers of his era.'”
Whoa, I guess I really did have good taste, despite the disdain from my college friends. I liked and had albums of the Carpenters too who were also mocked and had to play them in secret as well. Yet Karen Carpenter’s (RIP) voice has an otherworldly quality.
Why did John Denver recently come to mind? I was listening to my “Library” on iTunes, and instead of doing my usual mix of music or artists, I scrolled through the artist list and found John Denver. I played the six or seven tunes I have by him, and just reveled in the beautiful music my ears were treated to on that occasion. I had forgotten how good he was, and I have a special affinity for identifying with one song in particular, that I will explain below.
I sang my heart out to his songs and almost had tears come to my eyes at the beautiful Annie’s Song and Fly Away. I yodeled with him on Calypso – more on that in another blog.(He died way too young in a plane crash that he piloted after making a bit of a mess of his life with alcohol, so when I heard Fly Away, it was so sad.)
Go put on Annie’s Song, and agree with me that it is one of the most beautiful love songs ever written and sung. “She fills up my senses light a night in the forest, like a mountain in springtime, like a walk in the rain… Come let me love you, let me drown in your laughter, let me die in your arms…”

And now for my special relationship with another one of his songs, Take Me Home Country Roads, that begins with “Almost Heaven, West Virginia…”  I used to sing along with that tune when it first came out, not knowing what the heck John Denver was talking about in West Virginia, having never been there. About seven years after the song came out, I was a federal investigator for my first job out of college, (while in night time grad school) and my territory of investigations included West Virginia. I always traveled with a work buddy or two, making it a fun adventure in those days of my early twenties.

When we traveled to one of the West Virginia campuses we were assigned to in the fall one time, nature’s majesty just absolutely stunned me in a way it had never done before. The fall foliage and endless rolling hills laid out before our eyes took our breath away and it seemed like we were in heaven, the scenery just too unreal and pretty to even fathom. We (me and my work buddy Steve) started singing the John Denver tune at random. I vividly remember stretching out my arms at the sight before me, my brain and senses taking in the wonder that seemed like a work of art. How the heck would anyone understand those lyrics unless their eyes feasted on the sight we saw that day? I am so blessed to have had a variety of life experiences such as that one – a true A-ha! moment. Of course there were no cell phones then and we did not bring cameras on our business trips, so it will have to stay locked in my own memory. I searched for photos to attach and none were as perfect. Yet here is a sample: 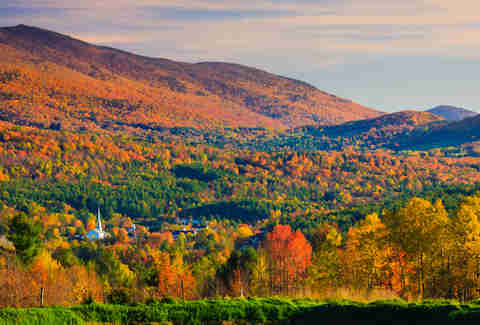 Much later on, I had a stepson, my dear Adam, who went to the University of West Virginia, where the State song was, of course, John Denver’s “Take Me Home Country Roads” and where you would hear that song everywhere, including during football games where we would go to watch Adam perform in the marching band.

Living in Houston I do not get to see fall foliage, but in my mind’s memory, it is absolutely gorgeous.

As you can see, my own roads have led back to John Denver, and his most beautiful songs. (Rocky Mountain High was especially related to during my many trips to the great state of Colorado) So it was a pleasure to hear many of them again, and appreciate them, and give this gift to my ears and brain.  He is long gone, but never forgotten, and had I known he was as cool as he was according to Wikipedia, I would have proudly played his albums to mocking friends and claimed I was cooler than them for knowing good music way back in the past. Treat yourself to some mellow John Denver and you will thank me for it.
8
Uncategorized