In Tribute to Omi

We lost our Omi last week. What you may ask is an Omi?

Omi is a cute way of saying the German word for grandmother. (Oma) She was my children’s great grandmother – their father’s grandmother. Omi was a forceful presence, and in the last half of her life, very few people called her by her given name of Frieda, or Friedl as she was known by her German relatives. Just about everyone in my generation, friends included, called her Omi. When I drove out to introduce her to my then new husband Gary when she was 93, she insisted he too call her Omi.

She passed away last week at the age of 103 after a long, mostly healthy life but not an easy one.

She was a young mother when the Nazi’s took over in Germany and she and her husband were increasingly alarmed as they lost all rights to a business, a home, a life. They did the brave thing, they decided to flee but she had a four year old child and was pregnant with her second when her husband was sent to a camp. Bravely Omi concocted a plan to get her husband released and they then were able to escape to Holland before it was occupied, where they spent a year before being able to come to the U.S.

Omi was a tough cookie – she had to be and remained that way, with an adorable and endearing soft German accent. She was quick with a biting comment, but just as quick to have a twinkle in her crystal blue eyes when she was proud.

Omi saved photos and other small items that she was allowed to take with her, and gladly shared the family history with everyone even though the entire family who stayed or went to Holland perished in the Holocaust. My favorite item which she later gave to me was a tiny baby teaspoon with the initials A J R on it. The initials stood for her husband’s late parents, (Alfred and Jenny Riesenfeld) but they were the same initials as Arlene and Jeff Riesenfeld – us. It was fascinating how she had to leave mostly all of her possessions behind but was able to bring just tiny mementos which she kept in loving, perfect shape to pass down to the next generations.

She was lucky to have her husband’s brother and wife in New York where they moved and they built a new life. Her favorite line was,”We came here only with 10 dollars in our pocket,” to illustrate how they literally had to start all over with nothing. Their sons became successful and Omi was able to live out the later years of her life in a high cost elegant senior’s development. She kept her strength, determination, and robust health while living independently in her own apartment there. She even worked at the gift shop, which she loved. Amazingly, her mind stayed razor sharp just until just recently.

Just towards her last four years or so, she lost her independence and was moved to assisted living after a fall and an injury. She eventually moved into nursing care as her health and some of her memory began to decline.

When she first met me, she did so with an extra critical eye because Jeff was her first grandchild and held a special place in her heart, yet we became warm and close in no time.

She did me a great favor when her first of her great grandchildren – my son Brett (named after her late husband Bruno) was born.

I was working and very career oriented and thought I would get my baby on a schedule and return quickly to work. She came and helped train me in the ways of infant care. Some may have called her tactics old-fashioned, but she showed me how to provide structure and security for my baby, who then thrived. I decided to be a stay at home mom and gave up my career, but not before I attempted to go back while she babysat for Brett. It lasted just a few weeks and when I knew Omi had to return home, I decided to quit. She supported my decision. She came for a long visit when my daughter Elissa was born as well as I had lost my own grandmother by that point.

Omi was quick with criticism and sarcasm too, and often remarked how my young friends were spoiling their babies, or disagreed with my going to my crying baby. Yet we bonded for life from that experience, and even after her grandson and I got divorced, Omi remained a family member – a surrogate grandmother to me as well.

When she reached her 100th milestone I was sad that I wasn’t included in her birthday party, especially because as she aged healthy and sturdy into her 90’s, I used to tease her that I would continue visiting her and even dance at her 100th birthday party – to which she would shrug me off and say “Ah but wus!” (one of her favorite sayings). She didn’t construct the guest list and that’s how it goes with divorce – and ours is a friendly one. Shortly after that party, she began her decline. 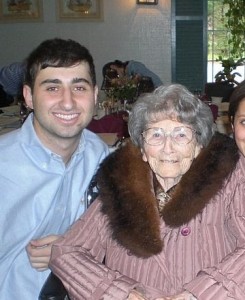 Above: My son Brett with Omi at her 100th Birthday Party.

Although I hadn’t seen her since her health began failing, I thought of her often and remained in touch by phone and correspondence.

Omi will be buried today but will always remain  in the hearts of those who knew and loved her.