Letters to Vicki of New Zealand

When I was growing up, I lived on the same street as our neighborhood library, Bushrod Library. In fact, it was the landmark I used to describe where I lived time and time again, “on the Bushrod Library street.” ( I have been gone for more than three decades but hear the library lives on in the same spot.)

Maybe due to this, or perhaps just a coincidence that my parents put me in convenience’s way of a library, but I was a voracious reader growing up. I read and read and read to my heart’s content. I could finish a book and trot up the street to get new ones all in the same day.

Reading like that spawns a lot of people who become writers, so I credit being in the vicinity of that library that instilled a love of writing too.

I never really got much practice on my writing ability save for a short story here and there that I wrote on occasion (wish I had saved those!) but in fifth grade, I had my favorite teacher ever and she provided a perfect venue to hone my writing talents. Ms. Cohn connected us to penpals in New Zealand.

New Zealand was not even a country I had heard of as it was not covered in the geography lessons we had to that date, but Ms. Cohn made sure we knew where it was. Of course we had all heard of Australia, and we now knew that English speaking penpals were waiting for us in the country next door.

With some skepticism, I chose a name at random: Vicki Davidson. (Victoria) And I wrote to her, all about my life and school in Philadelphia. This was the mid-sixties, so I added a little pop culture to my first letter to her. I didn’t even know if she was a real person, or if she existed at all. I sure didn’t know I would hear back from someone clear around the world from me. Many of our classmates never heard from theirs.

My letter must have clicked for the young Vicki Davidson from Dunedin, New Zealand because she wrote me back and it established a penpal friendship that went all the way through fifth grade and each and every year through high school.

Oh the books we wrote to each other about our lives, our crushes, our loves, our schools and environments, and pop culture. We shared a love of music, particularly the Beatles, and the Monkees. We shared teen angst, growing pains, hopes and dreams. We both found out that despite living on opposite ends of the Earth, we were so much alike.  As we absorbed each other’s cultural tidbits, we realized that our lifestyles and lives were very much the same.

She wrote all of her early letters on a blue eggshell thin paper sent airmail. (The last two years we wrote – in 71 and 72 – she sent in regular envelopes as you can see by this photo) 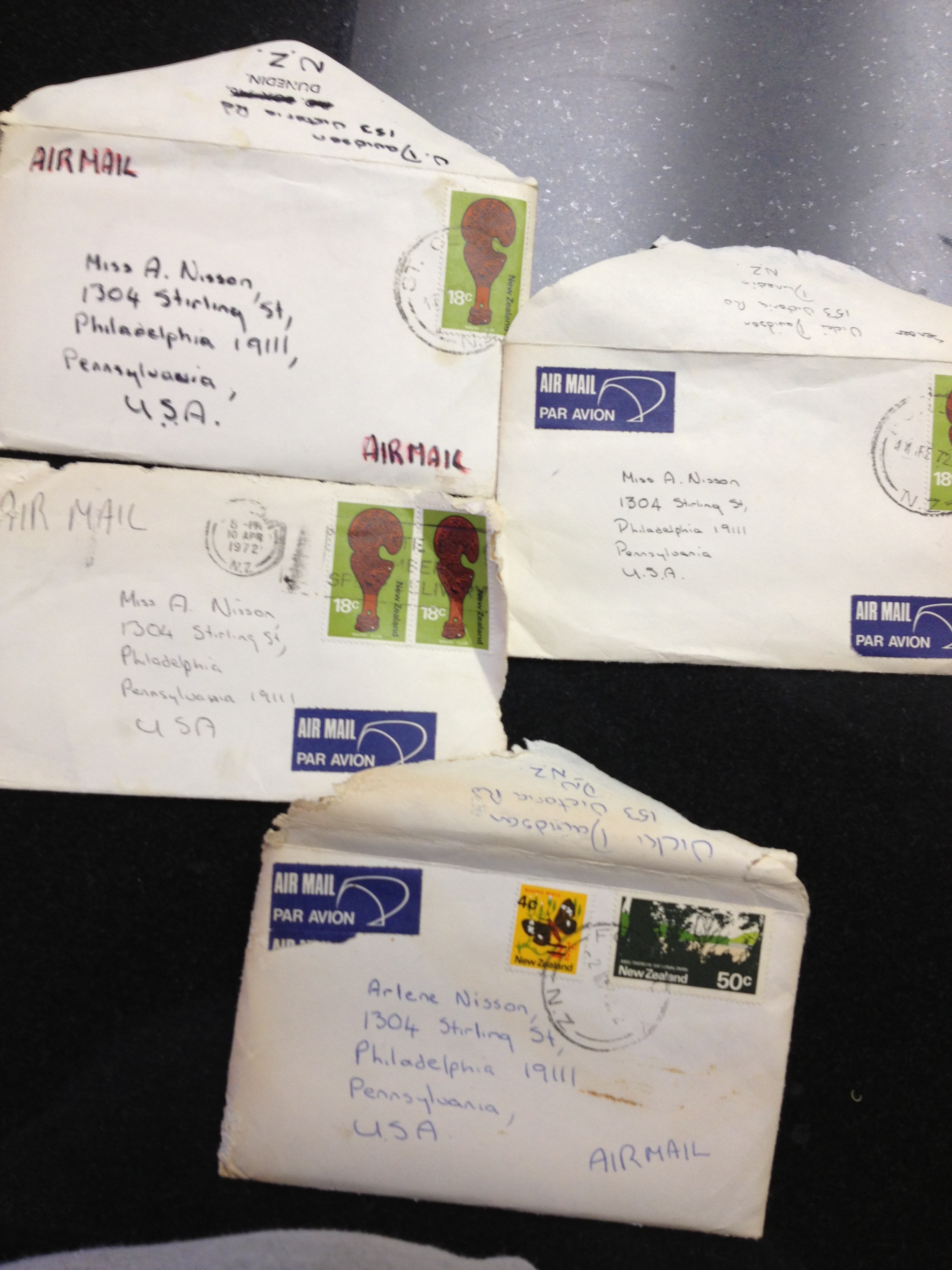 I wrote mine on regular stationary and spent a lot of my own earned spending money on mailing those mini-books to her. Before long we included photos and then in high school, cassette tapes of our voices. I wanted so badly to hear Vicki’s voice and accent as I was always charmed by the colloquial sayings and words she used that were common in New Zealand. Her spellings of words were British – for example Colour for Color etc. I was not her Penpal, but her Pen Friend. (cute, huh?) Vicki had her whole family speak to me on those tapes, and they were always so giggly and preocious, particularly with their peculiar yet endearing accent. (Think of the Aussie accent, but a bit flatter. It sounded as though every sentence and statement ended in a question mark too!)

It was always a joyous day when I received mail from Vicki. She always answered my questions and was responsive to my life situations that I described in detail.

Sometimes we would go a long while without being in contact. I would always write immediately back, but Vicki could take her time responding.

In my senior year, 12th grade, Vicki was also graduating and she was doing what many European kids do after high school – she was traveling the world, back-packing. Her first stop, she announced, would be Philadelphia, where she would stay with me for a month.

WOWIE! What luck for me to actually meet someone I had a letter writing relationship to for so long. We really had become dear friends and confidantes by then.

She stayed for a month, and we became like sisters, fighting half the time, and loving each other the other half. I worked and had a boyfriend, so I abandoned her a lot and she had to explore on her own during those times. She was really independent and probably didn’t mind, but I felt guilty. I wish I had my hostessing skills back then that I do now. 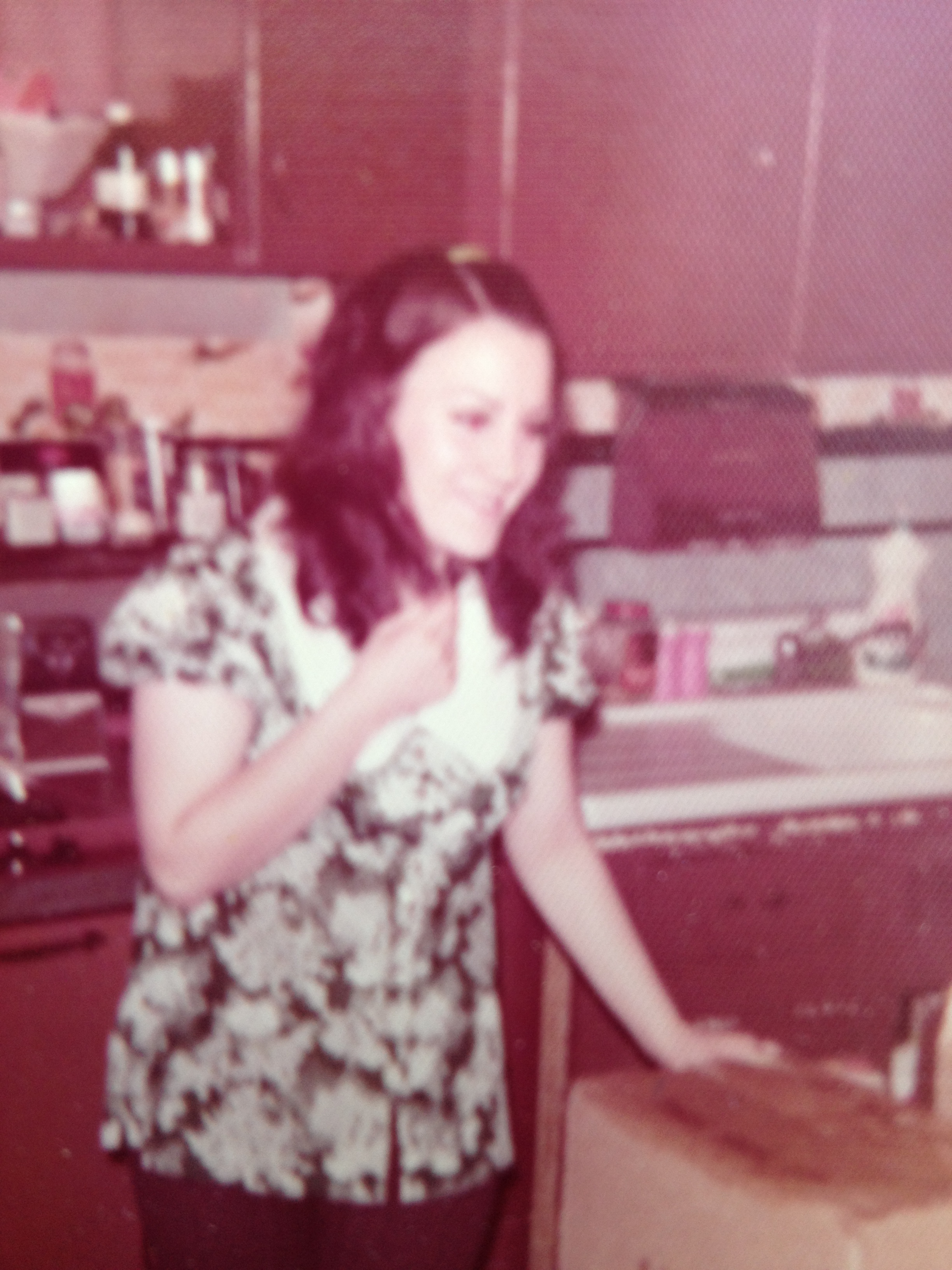 After her visit, she went off to travel around the US and then Europe. It was very hard to keep in touch with her during her travels, and last I heard from her, I didn’t think she was returning to New Zealand as she had fallen in love in Europe somewhere, I can’t even remember where.

Our friendship ended then, sadly enough. We lost touch, and I went away to college and then moved to Texas after college. I never really knew where Vicki ended up, but maybe it was back to NZ.

Of course I am an expert Facebook stalker, and Google stalker. I have to research people all the time for writing and I can find anyone most of the time. So  I tried to Facebook locate Vicki  and even Googled her and thought I even found her one time under her full name Victoria. It sure looked like her. I remember exactly what she looked like. But this was a young girl, and Vicki would be my age. Unless she was frozen in time. Perhaps she is a relation to the Davidsons of Dunedin New Zealand. At any rate, no Vicki Davidson from Dunedin New Zealand on Facebook, darn it. (An extremely common name too) She will have to locate me, if she gets the whim one of these days. I’d be really easy to find via Google as my first and maiden name is all over the internet due to my writing.

Instead, I will have to sit and hope that someday I will reconnect with this very special person from my past.