I went to my class reunion after 25 years away, in part to see if blondes have more fun. When I was a teen in high school, I had that generic 70’s look of long straight brown hair parted in the middle, and I was downright plain compared to some of the glamorous girls that I went to school with.
Anyway, the experiment was a rousing success – as a blonde I had a lot of fun. Although so did the brunettes. 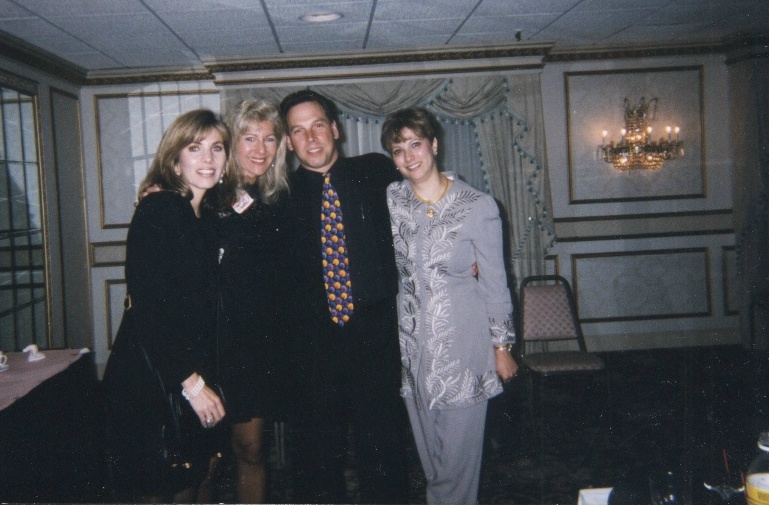 Here is  a shot of two of my dearest friends from High School with me and a guy I knew way back from Elementary School. (We will all see each other again at our next, which will be 15 years!!! after this one)

It was intriguing to see what our large class of typical 70’s teenagers had become. At that reunion, and the 30th, I looked around and thought, “Who are these old people?” We were officially old enough to have morphed into our own parents.

As far as looks, all of the attendees fall into these basic categories:

1. Time stands still:
At my last reunion, (30th) Linda G. won this prize. She was a former cheerleader, and still looks like the exact same petite cutie. At the 25th, Jay C. fell into this category. He was every bit as cute and youthful looking as he always was – looking exactly the same, as you can see in this photo of Marci, me, Jay and Pattie from the reunion:

2. Aged very well, like a fine wine: Many, many people fall into this category, especially women who have the benefit of makeup, hair color, and personal trainers. These are people that looked okay or good in high school and look great now, albeit different – which is why they are not in the number 1 category above. (My cousin Joel insists I fall into this category but some might put me in the next)

3. Nearly unrecognizable:
Reasons for this include balding or bald plates, weight gains and losses, and major plastic surgery – particularly on facial features.  Considering the fact that the guys back then had LOTS of hair, seeing some of them bald made recognition difficult. This category, however, does not single out those who looked worse; it includes those who look so much BETTER than before too. For some of the guys, a shaved dome was much better than the previous unfortunate Afro or Prince Valiant or Mullet hairdo.
As for me, because I moved away Post College and I hadn’t seen everyone all along, and no one had seen me in years and years, there were some uncomfortable words used by people surprised by my appearance that included “metamorphosis” and “blossom.” (I need to add here that I have had NO plastic surgery – just a rendezvous with hair color.)
4. Completely unrecognizable:
There are those people for whom it seemed impossible that they are the same age as me as they have aged so very much.
These were the people where I had to squint and squint to read their nametag after they greeted me because I had no earthly idea who they were. (Though there were plenty of people squinting at my nametag too, come to think of it.)

The reunion reminiscing fell into a few categories as well.
1. Those, like me, with crackerjack longterm memories – Thanks Jay, Joy, Richard, Len, Bonnie, Barbara and many more! They not only remembered me personally, but had many anecdotes to share with me about our good old times.
2. Those with hazy memories from some combination of dead brain cells due to past recreational chemical usage or aging brains: These are the people who have to be given very specific anecdotes to even remember you and their part in your life. They are only fun to share with after the light bulb goes off – which takes an average of two to six anecdotes before anything strikes a bell.
3. Those with absolutely no long term memory: These are people that only remember their best, best friends, and the people that they kept in touch with up to the current day. As far as anyone else: gone and forgotten.
4. Those who have forgotten you, not due to faulty memory, but due to snobbery, or the fact that you were not significant or important enough.
5. Those who unfortunately have NOT forgotten you OR their snotty attitude from the past: Snapped one to her husband in front of me (not from our class) who was a wee bit too friendly, “She was NOT this good looking in high school, trust me.”  Sniffed another, after surveying me up and down at one reunion, “Isn’t time the great equalizer?”
(Have I mentioned that there was NO plastic surgery on my part?)

Going to a reunion is even more fun in this era of social networking. You can reconnect with people well before the event, making it so much more comfortable when you do attend, and particularly if you live far away.

Can’t believe it, but the class before mine (whose class includes so many people I know) is planning to have their 40th shortly and my own class is planning our 40th next year. Can we really be that far out of high school? Guess so.