I have an adorable 14 1/2 year old toy red poodle named Doodles. We adopted him along with his litter-mate, who we called his sister, Pebbles. Doodles was content to let Pebbles grab most of the spotlight during her 11 years on earth, until she passed away, but he was always a pretty funny little guy just the same with his own, opposite personality. He’s always been very expressive and even opens and closes his jaw to mimic talking, when he is close to our faces and we are talking to him – a trait that charms both my husband and me. 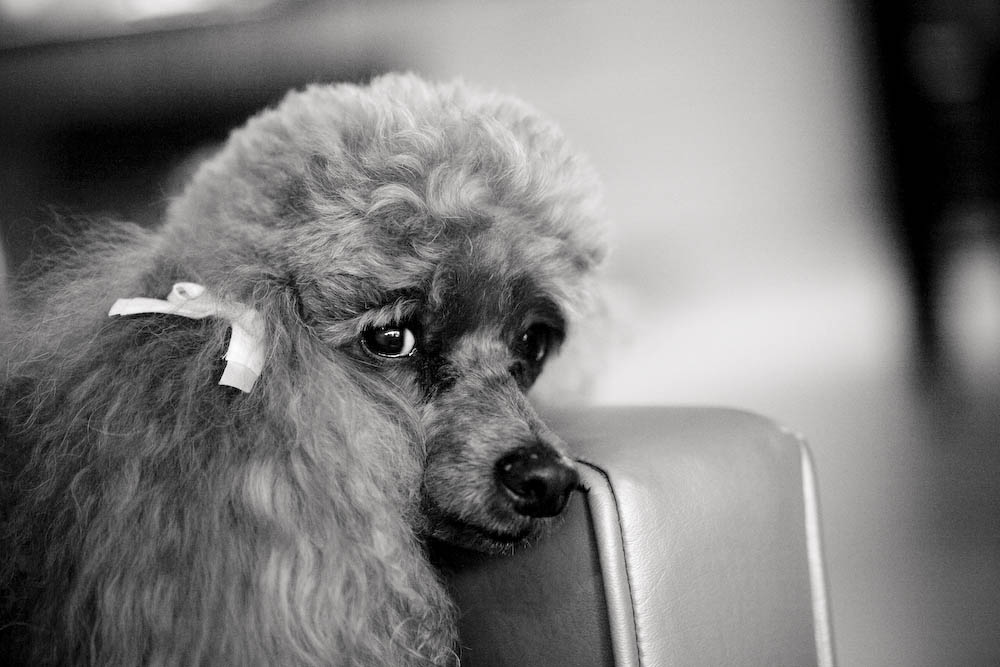 At age 14 1/2 he is definitely in advanced age, although small dogs live longer so he may have lots of years left.  Yet, for the past 6 months, I have been harboring horrible thoughts of Euthanasia because I saw he was suffering and there wasn’t a thing we could do for him.

Doodles, like many advanced aged dogs developed arthritis and joint pain. He became more and more debilitated in the last months and couldn’t even do his nightly walk around the neighborhood. In fact, he had to be carried outside to do his business.

This broke my heart. He lost all of his unique personality and traits and behaviors and would just lie motionless for 23 out of 24 hours a day.  He wasn’t sleeping all the time but laying very still with his eyes wide opened as still as possible.

Now I don’t know about you, but I pop Advil so fast for any ache or pain, including the tiniest tweak of an oncoming headache. I couldn’t fathom living the life of a dog where there is no Advil for pain.

Sure, we tried many methods of anti-inflammatory and holistic medications to give him relief but I could tell they weren’t working. It was hard to live with myself for allowing him to suffer, even though he put on a brave, stoic front.

As he lay, day after day, like a lifeless dishrag, I thought about the past times that he would jump up and greet us as we came through the door, as he woke up with us and greeted us lovingly in the mornings. I even thought about his more annoying personality traits of being stubborn and passive aggressive when he did not want to obey. Pebbles always obeyed and I was not happy that Doodles wasn’t built the same way, but still it amused at times. For example, when company was in the house due to one of my kids visiting and friends coming by to visit, Doodles refused to come to the bedroom to go to sleep in his normal spot when we retired for the night. He wanted to hang out with the young people but we always closed the door, so his stubbornness usually meant we would have to carry him back forcefully or we let my daughter deposit him in the bedroom much later when she went to bed.

There wasn’t much personality or joy left in Doodles. Nothing seemed to make him happy. It made me very said and slightly crazy, as I said above, considering if it was more humane to let him go quietly to sleep or continue living with us while suffering. I knew he had a poor quality of life and it was killing me to watch him like that.

My stepson Adam is a veterinarian who was enormously helpful, but very far away. He sent us to animal Chiropractors and Acupuncture specialists. And during one visit, we finally hit the jackpot.

Doodles is BACK in most of his glory now. He waits at the window for Gary to return home, he jumps off the couch to greet us when we arrive, he greets me every morning again instead of sleeping in.

A Chiropractor told my husband Gary about an injection that we could give Doodles twice a week, of a medicine called Adequan. Yes, you read that right. INJECTION.

It does something to lubricate joints and bones, and the results are amazing.

My darling husband was willing to learn how to do this and he injects Doodles who doesn’t seem to mind this treatment. This miracle drug has saved my precious Doodles from suffering. He is almost spry again after several weeks on this treatment. He is awake and alert and friendly and happy again. He does a half block walk at night on his own too. It makes me cry to think about what he must have been going through before we found this relief for his arthritis.

If your dog is experiencing this, please check out this wonderful drug. As my husband Gary admits, it is easier to give him a needle injection than he ever thought it would be. (Like injecting a peach)

I only hope word spreads about this amazing treatment and all poor little arthritic animals can benefit.