I am running this piece again to support Channel 13’s blood and marrow donor drive. Gary and Sheryl were just interviewed by Christi Myers about their experiences as a donor and recipient. This interview will air this week on the 6 O’clock news on Thursday or Friday.

This piece is a true story about my husband’s donation of bone marrow to save a stranger’s life, and how she thanked him. This is but one reason that both my husband and I are so committed to this wonderful, lifesaving program. Though due to career reasons, I can no be a volunteer bone marrow courier, Gary continues to be a courier and my heart remains solidly with this life saving program.

The bride-to-be, Sheryl, demurely pulled me aside, and asked if she could borrow my husband, Gary, for a dance at her wedding reception the next day. Though I didn’t know her well, I knew enough about her normally feisty, even pushy, demeanor to be taken aback by the gentleness of her request. Normally she was not the type of person to ask permission to do anything she cared to do. This aspect of her personality served her well while she was battling two life-threatening bouts of leukemia several years earlier.

She carefully explained her special plan for her dance with my husband but before long he came bounding up on us, and we quickly changed the subject into wedding chitchat. Sheryl intended for her plans to be a surprise to Gary, and now we were co-conspirators. We had gone to Detroit for the weekend of her wedding, and a case of bad timing and chaotic situations on the home front made me initially regret the time sacrifice involved in our travel plans. It felt more like a trip of obligation to be at this wedding rather than one to celebrate a joyous occasion. Until Sheryl’s request for the dance with my husband that is, when I was jolted back into understanding the impact of Gary on her life, and in getting her to her wedding day. I realized that I would be witness to a life cycle event of miraculous proportions, made possible by several smaller miracles and a generosity of spirit on the part of Gary that defies description.

In 1995, Gary received a call from the National Marrow Donor Program that he was a preliminary match for a potential bone marrow transplant that was needed to save the life of an unrelated stranger in another part of the country. Signing up years earlier in a drive for a sick child, he had forgotten before that call that he was on the national registry of bone marrow donors. Initially reticent only because he did not understand what he needed to do and how much it would disrupt his own life, once he learned it was a matter of life and death, there was no question in his mind that he would give his marrow. He found out that he had to go through general anesthesia and surgery to remove his marrow, but not only was willing to do that, he wrote a note with his prayers for the health of his unknown patient to be given to his recipient along with the bone marrow.            Most of the thousands and thousands of people on the national registry never match an unrelated patient needing marrow. It takes a miracle of matching six out of six blood antigens, something akin to winning a lottery by matching six out of six numbers.

Gary did not know who needed his bone marrow at the time, because the identity of the patient and location is kept confidential for a one-year period. After the one-year period, if the recipient survives, he or she could opt to contact the donor, only if that was mutually acceptable. For Gary, the pain and inconvenience involved in having the surgery meant nothing in comparison to his fervent hope that his marrow could save the life of a person sick with leukemia. He included the patient in his prayers and whenever he was asked about donating marrow, he always turned around his giving of the gift of life by saying it was a gift to him to have the opportunity to save someone’s life. Although his selfless act is something he is proud of, he is very humble about the part he played; saying that the patient, and not the donor, is the real hero. After the one-year waiting period, Gary received notice that his patient had survived thanks to his bone marrow and she wanted to contact him. He readily agreed. That was the beginning of the long distance friendship of my husband Gary, and his bone marrow recipient Sheryl, a young woman who lived in the Detroit area.

After the transplant, Sheryl continued to struggle with various complications of her illness and her long road to recovery, and due to her focus on survival, apparently she

felt she could not properly express her gratitude. Perhaps she thought the giving of such a precious gift perhaps warranted a thank you on a grand scale. She would have to find her own time and way to express how she felt.

Sheryl fought this latest battle as all her battles with leukemia like a tiger and emerged victorious. Now, as she was fully recovered and preparing her wedding, she wanted, surrounded by all the people in the world she loved and cared about, and who cared about her in return, to properly thank and honor her generous life saver. As yet another wedding detail that needed intensive planning, she went about finding the perfect tribute for Gary. She found a special poem on angels and had a special frame engraved with Gary’s name to hold the poem. An angel figurine was purchased to accompany the poem.

A perfect and peaceful late summer wedding day arrived, and the ceremony went off without a hitch. Soon after, the reception and celebrating began, and just after the meal was finished at the reception, the lights flickered for a special presentation. The disc jockey, playing the role of master of ceremonies, called up both sides of the bride and groom’s immediate family. Various parents, stepparents, brothers, sisters, nephews and nieces took their places on cue in rows before the celebrants, while Sheryl took the microphone in front of them. “I hope I can get through this next part,” Sheryl said to the rapt audience, her voice starting to break up. “I’d like to call up one other member of my family, an honorary member, and someone very special who came with his wife from Houston to be here for my wedding. If it wasn’t for this special person, I wouldn’t be getting married today and in fact I wouldn’t be here at all. Gary please join me up here.”

Surprised, Gary walked to the stage. Sheryl briefly explained Gary’s role in her life to those assembled, and then read him a poem on angels. “You will know when you are touched by an angel,” Sheryl read aloud. “Just know there are Angels in our life, usually taking a human disguise, working and performing their acts of love. They may borrow the face of a stranger; even borrow faces of friends… I know first hand Angels are here with us. You see, Gary, you are my living proof. I love my angel.” In front of the crowd of celebrants, she presented him with the framed poem and the angel figurine, and they embraced. It was a powerful thank you and the audience, myself included, were humbled for the moment, pondering the difference one person can make in another person’s life. 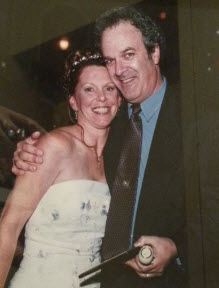 Then music swelled with Bette Midler’s “Wind Beneath my Wings,” which begins with the words, “Did you ever know that you’re my hero?” As they waltzed around, locked in an embrace, looking at each other lovingly, they seemed to be sharing a bond that few of the rest of us could ever know or understand. Related by shared bone marrow and white blood cells, they danced the wedding’s first special dance together.