My Penchant For Hoarding Brings Me a Time Capsule

Posted on March 20, 2013 by arlene
A while back during a visit to my parent’s home in Philly, I asked them what happened to my old boxes of “Stuff” because I knew many years before, they emptied my bedroom into boxes and made it a guest/office type room.
They told me the boxes were still in the garage, and that they will toss them if I want, or I could take them away. I went into the garage and opened one of the boxes and found a treasure trove of old high school memorabilia, so I shipped the boxes to Houston. Interestingly, I already had a bunch of memorabilia saved from my college days on including the love letters and treasures from my first love detailed in this past blog, (Which went from high school through much of college)  so this was the oldest stuff left that belonged to me. (Read on about my sentimentality and pack rat tendencies)
Once they got to Houston, I tossed them in the attic, but pulled a few treasures out first, like my old jewelry box with high school costume jewelry and old jewelry hand-me-downs (costume variety) from my mother and grandmother.
I didn’t have time to go through all of the boxes but I had a slight idea of what was contained, such as old photo albums, clippings etc.
I recently wrote a blog about my old penpal from New Zealand and before I did so, I was on a mission to find old letters and photos of her so I  took a day to explore the contents of the boxes in the attic. (I call this research for my writing).
I have a secret I have to admit to – I am a sentimental nut and a pack rat almost to the point of hoarding. I have all sorts of sentimental notions that I save for some compulsive reason that only a person appearing on the show Hoarders would truly understand. Fortunately, my house has a super large amount of storage space, beyond what would be in, say, three or four normal sized homes, so I can hoard these sentimental items all I want to and never see them stacking up and causing clutter or mess. In fact, my home is neat as a pin, orderly and clutter free — I don’t even let junk mail stack up on the exterior of anything for very long. But the volume of sentimental items I have hoarded are organized, tucked away, and equal in massive quantity to the piles you see in homes of those featured on the TV show – just much cleaner, organized, in great condition and put away in the many places my home has available.**These items include a full closet of newspaper clippings of my kids’ modeling, and my own writing and published stuff, and another full closet of photos, photo albums, negatives, and duplicates. Another huge cabinet contains every VCR and home movie I ever took. Still another large cabinet contains the artwork and schoolwork from both of my children through their school years. Old records and albums are stored in yet another large cabinet space. The list goes on and on.
NOTE: My children are lucky – their bedrooms are still shrines to their youth and all of their memorabilia is not boxed up in a dusty attic, but still on full display as if they still lived in their bedrooms. I call them the bedroom shrines.
A friend once commented to me that my survivors will end up hating me for having to clean or sort through this massive amount of “Stuff” once I am gone. (Special note to my kids: There is some great and classic stuff there that’s NOT online so check it out before you toss!)
Well, it seems this hoarding habit did not come recently or even in my adult life. I also hoarded every single sentimental item from high school. (For Middle School and below, much less so.)
Back to the boxes I shipped from my parent’s home: when I opened two boxes, all of that sentimental, hoarded memorabilia from high school came spilling out. It was actually like looking at a time capsule from the 1970’s. 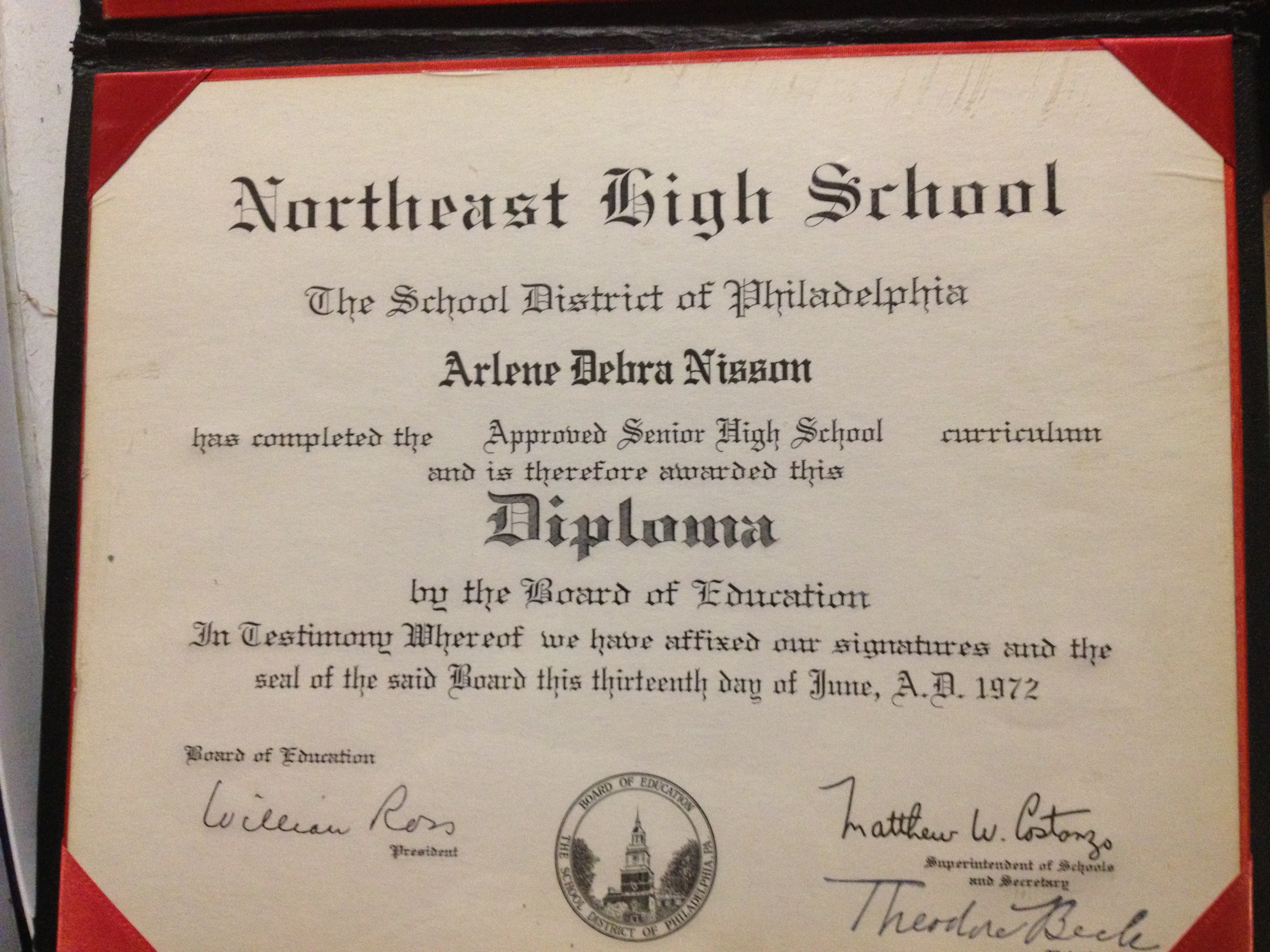 There was a scrapbook of current events and newspaper clippings, a bulletin board with more clippings and photos. (A playbill from my first Broadway show, Hair, and a clipping of my hero Mark Spitz) 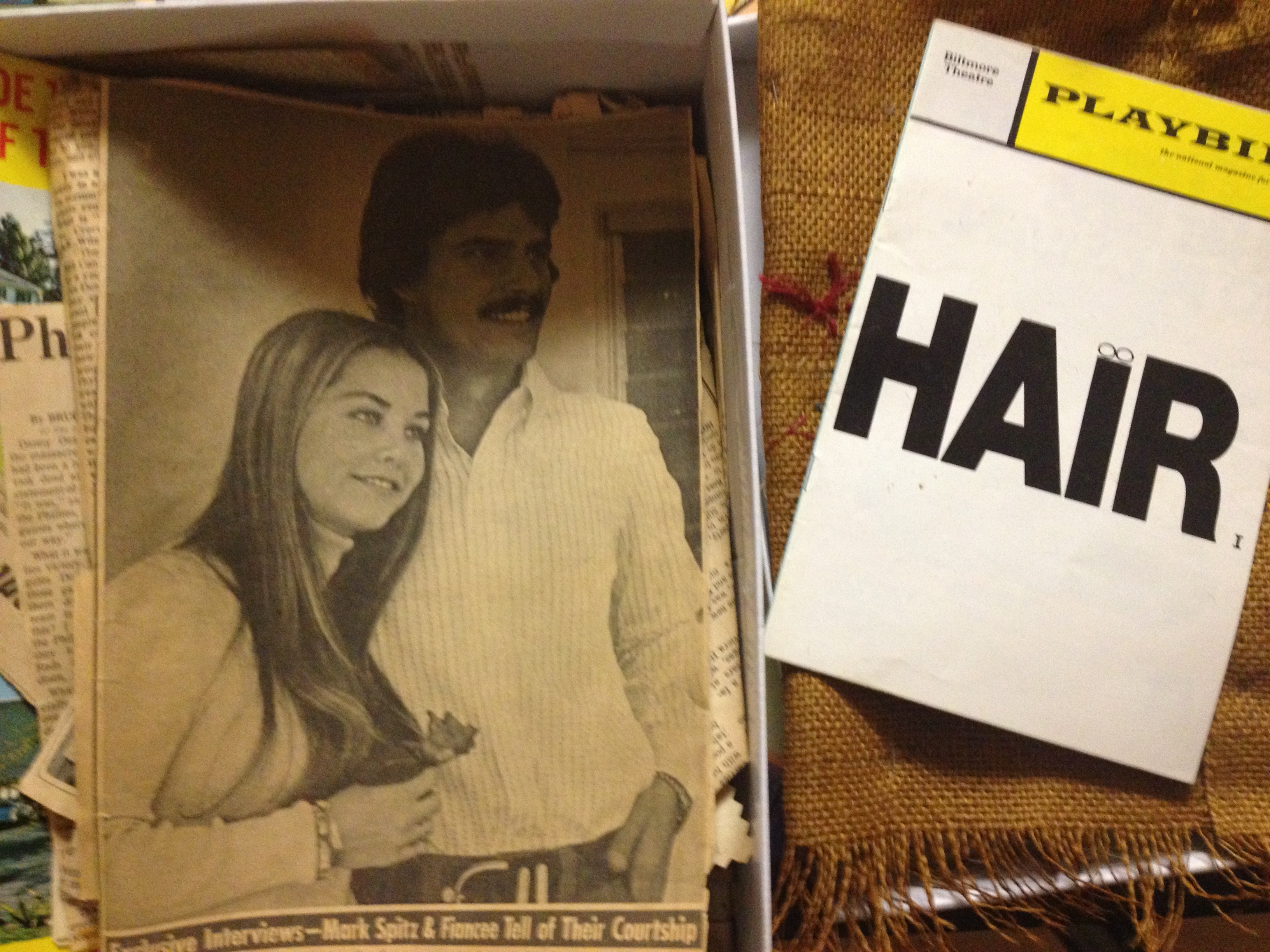 My favorite set of Jacks (color worn off and superballs still intact) – which I played for hours and hours with my dear friend Joy was in there! 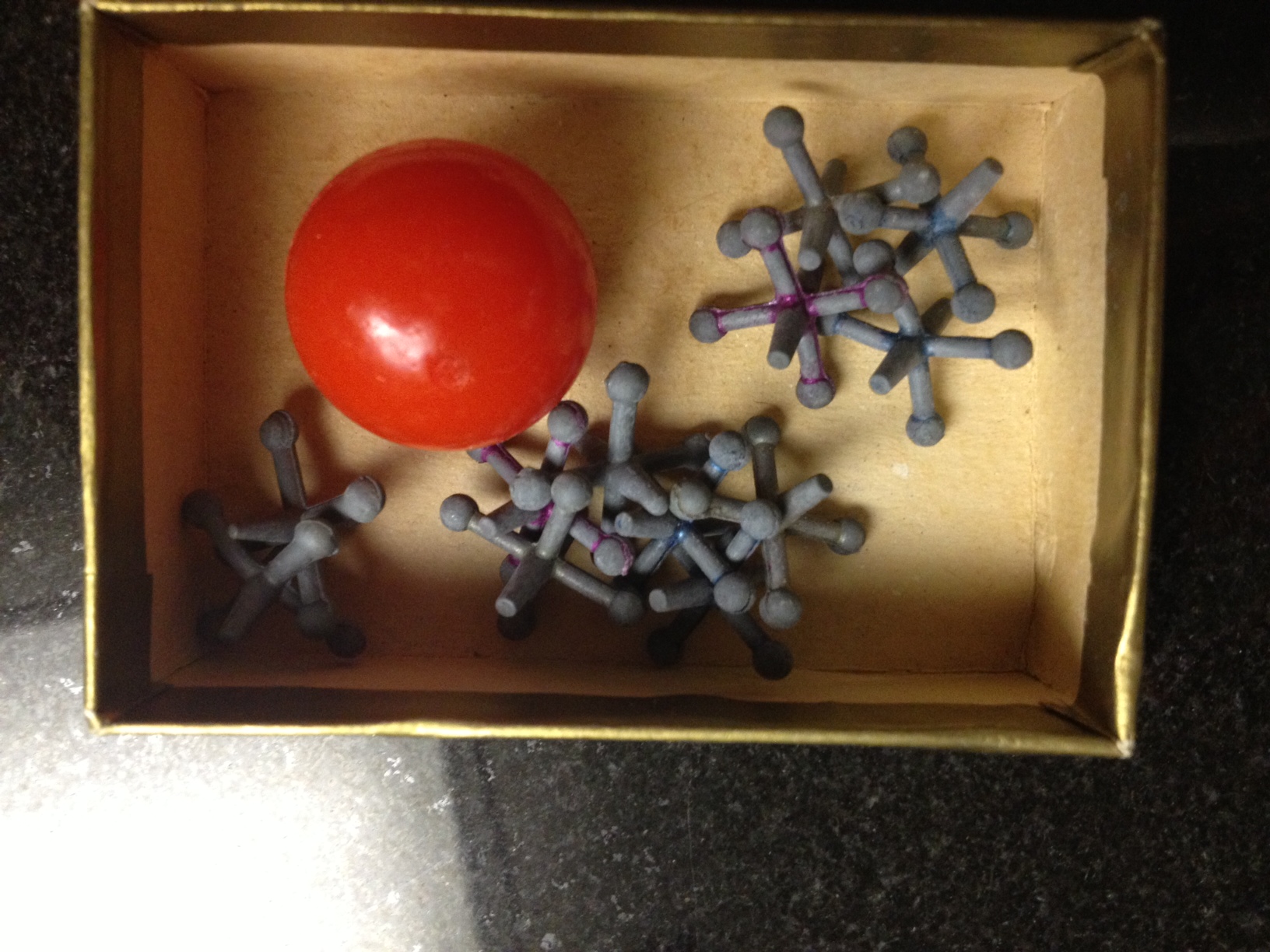 Also included in this box was a diary, photos, my high school diploma, our class hat and class buttons, other Northeast High School souvenirs with the school logo on them, my service award to the school, a Philadelphia ZOO KEY! 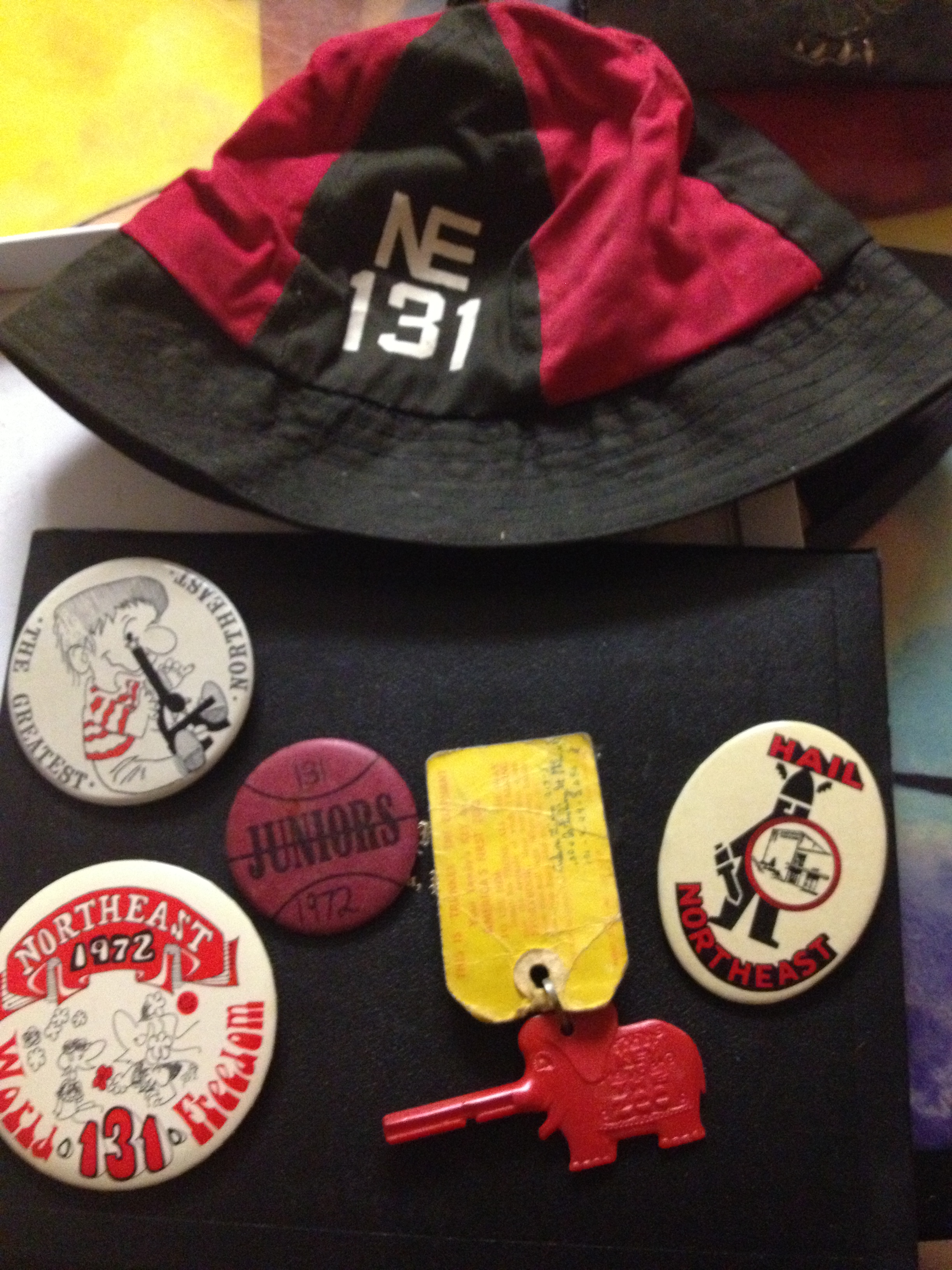 postcards from trips and vacations, correspondence including my PENPAL LETTERS! and lots of single photos with messages on the back from friends in a cute white photo wallet. 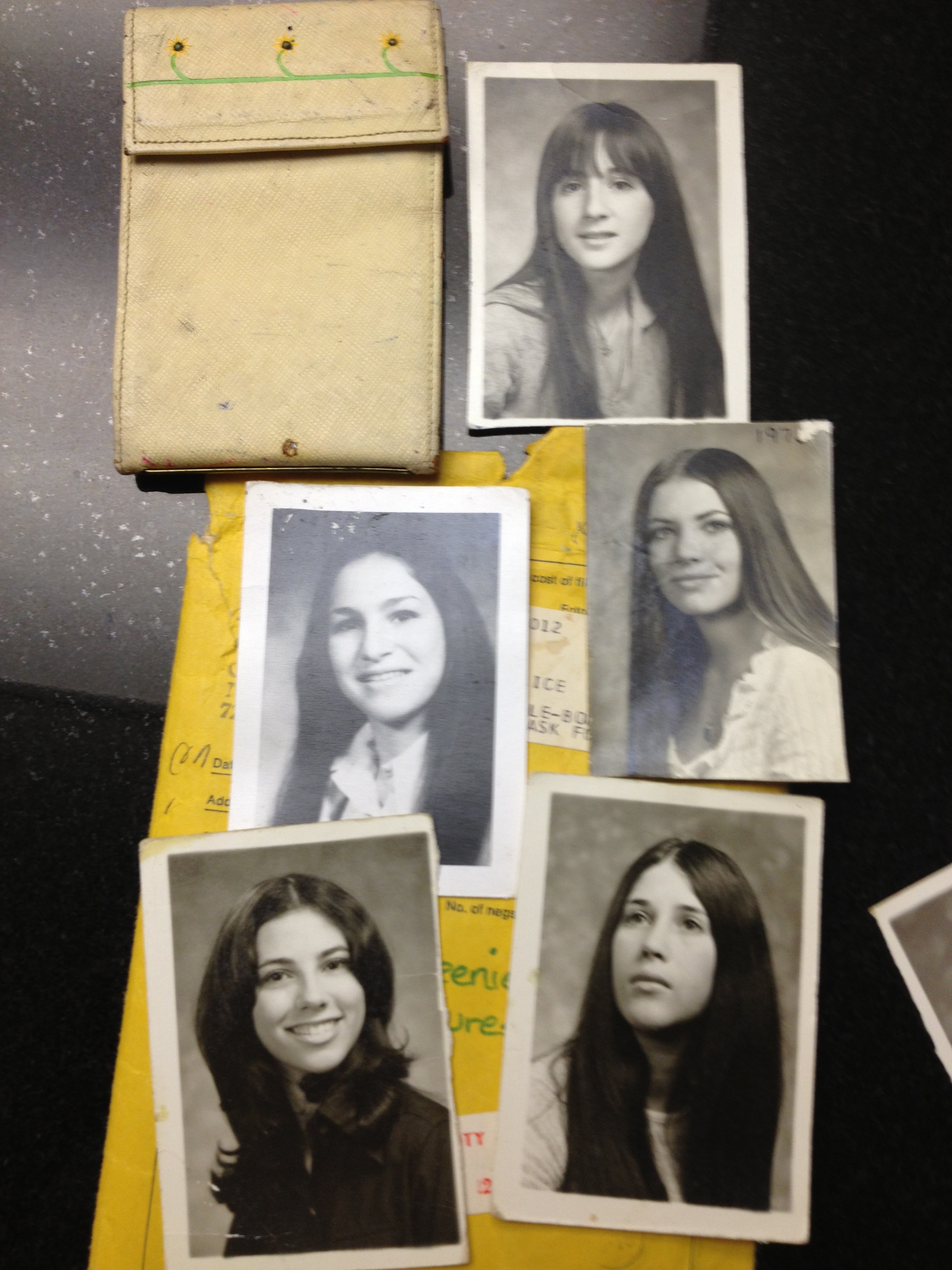 When I mention correspondence, I mean correspondence, such as letters, notes, postards and get well cards from when I had mono.
The most curious thing is that in a tin box, I found tons of notes to and from my friends, and I hadn’t a clue as to why these were saved and stored so well. Paper yellowed or browned around the edges, the lined notebook paper and ink and writing held up to time and give insight like a diary on what was on the minds of us average teens in high school. 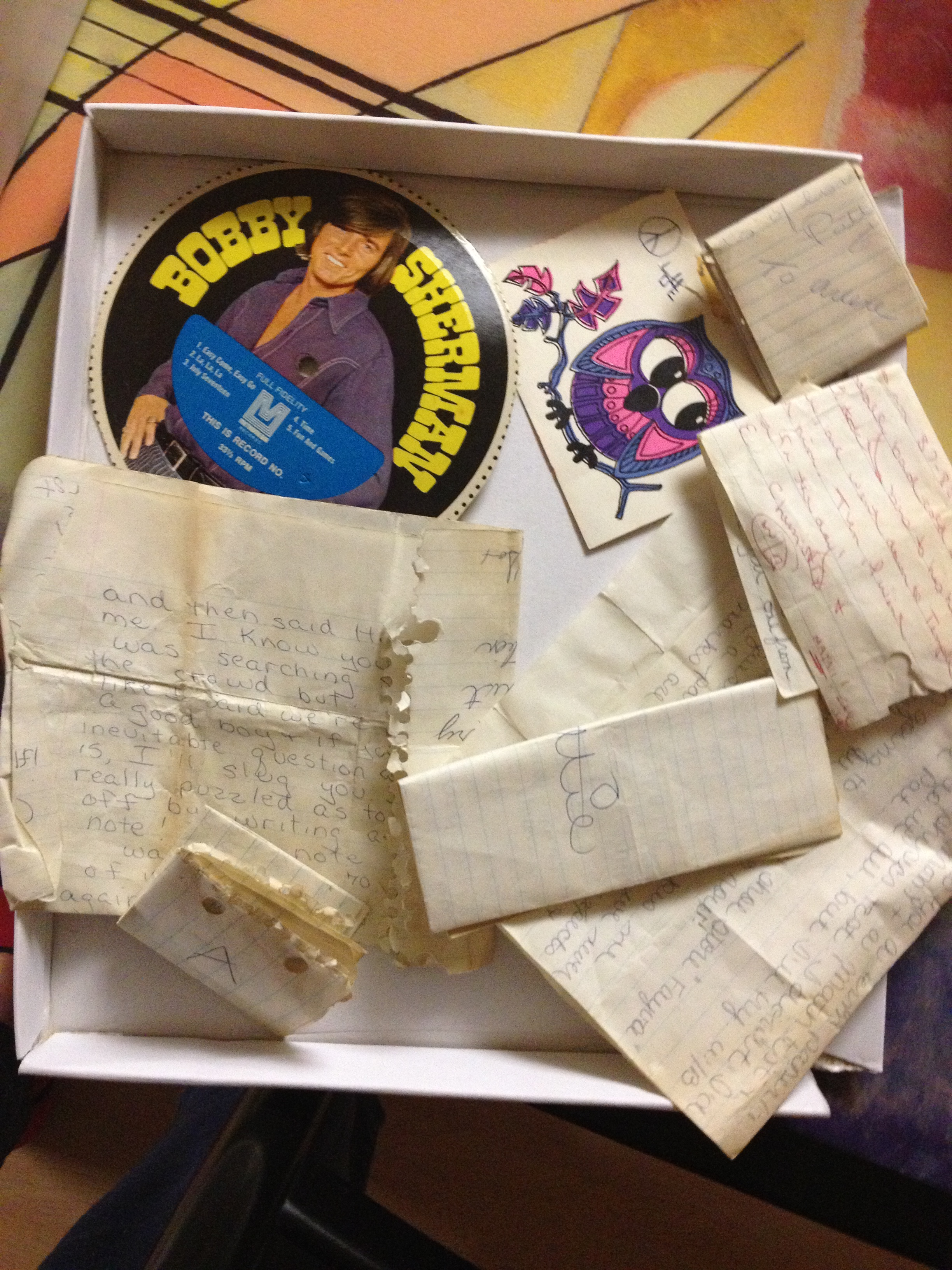 The only notes from a guy – Richard S were all folded up in a neat square with an A on the front of each one – there are lots from him as we were going back and forth about our BF and GF issues.

Explanation to younger readers: We did not have computers, electronic communication, text messaging or cell phones, so talking in person, or over a land line telephone, or passing notes (or sending letters/cards) was the only way to communicate.

My friends and I would pass notes back and forth in classes we were particularly bored in, or where the teacher wasn’t paying attention enough to catch us. The top of the pile, from senior year, were mostly from History or Chemistry class, with my still dear friend Pattie G contributing a ton, along with Barbara S, Judy S and even Richard S – who apparently was into sharing the details of his life in daily notes, including his views on the “sexual appetite”  of the 17 year old male. I shared one of these found treasures recently with my still dear friend from way back when -Barb who lives in Houston- and I had her in hysterics laughing.
Sad but true: I didn’t throw any of this memorabilia away after sorting through it. I felt that having all of it uncovered a true slice of life from a place back in time from my teen years in high school, and so they are historically significant for that reason alone. Kind of like having my own time capsule.
I know my old high school friends will enjoy reading this and seeing all the photos – so sometimes being a sentimental fool pays off.
18
Uncategorized