After watching my son deftly handle text messages on his cell phone, while juggling IM’s on his laptop computer, while flipping channels on the remote of the high definition TV, I decided that if all this technology was available when I was growing up, I would have developed a good case of Attention Deficit Disorder. Just watching him for a few minutes had my brain wildly spinning.

To get my gray matter back in order, I reflected back on my own basic and simple existence as a teen. While I didn’t grow up in caveman times, it was primitive when you compare the current era to what was available “back then.”

Cue the “Back when I was growing up…” reminiscing to my children and eyeball rolls.

But wait! They actually seemed interested! Like anthropologists discovering a relic of an ancient civilization, they gave me their undivided attention.

I covered the two things most important to teens: communication and entertainment. Now, come down memory lane with me!

Teens trying to get in touch with friends was a near impossibility outside of school hours.

Telephones: Households generally had one wall phone in the kitchen (or one in the main living room instead) and one in the parent’s bedroom, both attached to a short cord, and rotary dialing only. (For those of you too young to remember, rotary dials meant you had to spin a dial to the number you needed till it hit a metal stopper). No push buttons. No cordless phones or cell phones. With wall phones, you could walk exactly one foot from where the phone was perched and no more. (Meaning no privacy for those “personal” calls like conversations with a boyfriend and you definitely could not multi-task.)

For the more privileged teen, their might be a personal princess telephone in the bedroom (some with their own telephone number line!), assuring privacy in conversations, but those conversations had to be carried out while on the bed, again due to their being tethered to a short cord. 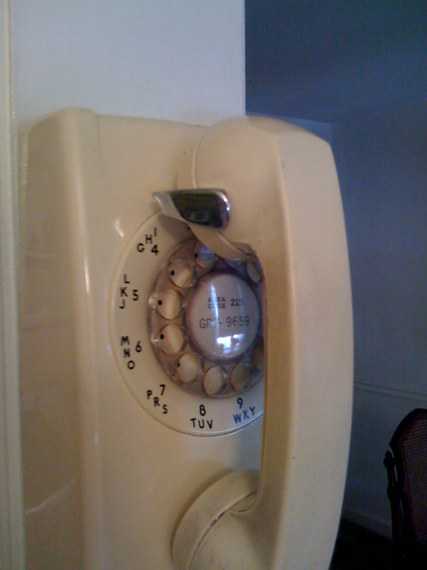 This was the actual phone in my parent’s home and remained way past it’s prime.

But the lack of privacy and ability to multi-task was a minor problem compared to the chances of actually reaching someone by phone.

Busy signals/No Call Waiting: Boyfriends (and other friends) trying to call you got repeated busy signals on their end of the line (an annoyingly loud beeping sound) if on your end, your sibling was tying up the phone with a long conversation with his/her friend, or your mom decided to have a gabfest with her mother. Friends or boyfriends could keep trying back to “maybe” reach you, but it could be hours of busy signals first. The more siblings, the less chance you had to get any real phone time in. Smoke signals would have been easier.

Reaching mom or dad to extend curfew or let them know where you were: You had to find a phone booth, no matter if you were in the middle of nowhere. Of course, once you did find a phone booth to make that all-important call, you probably got a busy signal and couldn’t get through anyway, because they were probably on their line with the police to get a search team out on you.

No Answering Machines: If you weren’t home, in fact, if no one was home, there were no answering machines to take messages. No caller ID either. That boy that finally called you after months of your wishing and hoping…. You’ll never know in a million years.

No computers, cell phones and so no emails or text messages: Hand-written notes only. No wonder so many of us got in trouble for passing notes in school.

Typing: In the days before word processing was a possibility for the average person, I learned to type in high school on a manual typewriter, where I got blisters on my pinkies from trying to bear down hard enough on the key to register the letter I needed. I had to make corrections with a pink eraser — the kind with little brushes on the end — which was never as simple as hitting a backspace key.

Music: Listened to on tiny transistor radios, AM stations only. Prayed and waited for favorite songs to come on — no music on demand.

We mostly had non-stereo record players to play big black discs — singles with big holes or albums with little holes.

We played our records so much because we had so few at our disposal. (no music downloading or Internet purchasing or playing — you had to walk or take buses to the record store to purchase them). They were played until the needles on our record players scratched them from use, and so listening to your favorites included “skips” where the music skipped to another point due to scratches.

TV: One, maybe two, per household, in the main room and in the parent’s bedroom. (NEVER in a kid’s room.) At first they were small black and white pictures only, then glorious color TV’s came about. Due to having one main TV everyone in the household had to actually agree on the same program — or those in authority dictated it. (Do you think I would have ever chosen Lawrence Welk?) We had only three stations to choose from, and then later a fourth public TV station. Years later, three UHF stations were available, but you had to have a special antennae first. No cable OR Satellite TV.

If you weren’t there to see your favorite program, too bad — there were no VCR’s or DVD’s or DVR’s. And no Internet to find out what happened either on reviews or write-ups.

Movies: If you had a favorite movie, you had to pay to see it in the theater and then wait three years to “maybe” see it again on regular television channels. (Remember, there was no Cable or Satellite TV.) Forget about renting, or purchasing a favorite movie, or downloading it. You would have to go to the theater again, pay again, and see it there again.