My Neighborhood, One Year Past Our Worst Flood

As I have written about and blogged about many times before, I live in a section of Houston called Meyerland. Suburban in feel, but smack in the heart of the city of Houston, it is a perfect place for a city girl like me who likes cultural arts events and happenings that a big city like Houston offers.

It is historically a neighborhood of professional people, including loads of medical professionals, doctors and such, due to our very close proximity to the world class Medical Center that is housed in Houston. (10-15 minutes away.) Look it up by the way, WORLD CLASS.

Meyerland was also the hub of the Jewish community, as the JCC and many area synagogues are in this area. It was ultra convenient for me when my children were growing up, in the middle of their bar/bat mitzvah prep, and involved in various extra-curriculars at the JCC, and the teen gathering spot, the Merfish Center, a block away.

The neighborhood truly fits me and has always felt as comfortable as an old shoe. I love that I can go to almost any hot spot or area in Houston, including the world famous Galleria, and get there in 10 or fifteen minutes. (I know it is world famous based on the many foreign visitors we hosted as it is our version of Rodeo Drive.)

I was never the type of suburban mom who doesn’t mind driving 45 minutes to an hour to get to the city. My husband and I go to a lot of concerts and theater, and all the great restaurants of Houston are closely situated to our area.

Meyerland is also lush with greenery and old trees, and all of the custom homes have character. It is a refined, if older and established look. As I pointed out in this past blog, mansionizing the neighborhood began about ten years ago as you can see by the photos in that linked blog, yet it maintained an older and established look. It is a friendly place where neighbors are friends and look out for one another. There are blue ribbon, nationally ranked schools in our neighborhood, which is why the real estate here has done nothing but rise since we bought our home.

Yet, the down side of Meyerland is catastrophically bad, something many of the residents were not aware of until the start of a terrible three years. Meyerland, our neighborhood flooded 3 times in 3 years, with the last the most devastating flood of all, as a result of Hurricane Harvey’s 31 trillion gallons of water dumped on us and just about every other area of Houston. (That’s about ten years worth of rain falling within two days – no city could withstand that.)

An old friend recently posed a question to me as he had seen the devastation of multiple floods in our area, though he lives in another state. He asked me, “Why don’t you just move the hell out of there?” I was so stunned at the question, which I will answer below in detail, that I just laughed and laughed in response. His area of the world is prone to wildfires and earthquakes and I wouldn’t expect him to move out of his area even with that possibility. Yet, it was a valid question and again, one I will answer in a few paragraphs for those of you who wonder the same thing.

The reasons we flood so much is mostly due to over-development beyond us where there used to be green space, and now it is all concrete in shopping centers and home developments. It’s also because we have the Brays Bayou running along our neighborhood – a concrete aqueduct sort of thing that is supposed to hold water and bring it to other water sources. Many are angry because Brays Bayou was supposed to have been widened years ago, but that never happened. When the Bayou fills up during monstrous rain storms, it then fills our streets and then comes into our homes.

Some even say the elevation of the entire area is different, that we have sunk to a much lower elevation over the years. What was before a 500 year flood zone, is now a 100 or 50 year flood zone, and with climate change, that bodes poorly for the neighborhood to survive torrential rain and those horrid stalled tropical storms.

This once idyllic place to raise a family with the best of public and private schools nearby, parks and many other amenities, had been all but abandoned after the third of the three floods.

If you were following my blog way back in 2015, you will know that was the year of the Memorial Day flood, where I came back from a quick get-away to find my home plundered by a foot of water. In that flood, our neighborhood was ground zero of a stalling rain pattern that no one could have predicted. (Go to my blog main page and search on word Flood to find all of my blogs, and you can also find them at this Huff Post link, and this one – oh and there are more at Huff Post and on my Hot Flashes blog if you are up for reading the whole series for the history of it all.)

After we flooded, my husband wisely knew that we should not just repair and restore our home. He saw the signs that more might be coming. We looked all over the city at new homes to move to, and we did not like anything we saw. The homes were okay, some very pretty, but it wasn’t our neighborhood. Those other areas weren’t our place in the world, and we couldn’t see fitting in at a neighborhood “foreign” to us. Bottom line, we just didn’t want to leave Meyerland. Sure, we could have chosen to “get the hell out” of here, but we were determined to stay. This is our neighborhood, and it is the only place that truly feels like home to us.

The difficult choice we made at that time (three years ago) was unusual, and not because we chose to stay. Most of our neighbors who flooded stayed too and just repaired their homes, and moved back in. We chose to demolish our home and build new on the same lot. It was 19 months of displacement, aggravation, and more expense than can be imagined. It was the hard road to take for sure, but at the end of the road, we would be safely elevated from flooding and still in our beloved area of Houston.

Our neighbors, no our friends because that is what they are to us, mostly bailed on Meyerland after Hurricane Harvey’s devastation. For many, enough was enough. Our neighborhood for the third time was a war zone, filled mile high and wide with debris from people’s ruined homes.

It was a ghost town here in Meyerland. Some just needed time away to consider what to do, some had to wait for red tape insurance settlements, and it was nearly impossible to get contractors because everyone in Houston, well outside of our area, was also flooded.

My husband and I were worried. In our high-up new home, we felt like the sole survivors left on an abandoned island. We wondered if it was the end of Meyerland as we knew it. It was downright depressing, yet nothing compared to what all of Hurricane Harvey’s victims were feeling.

Now, exactly one year later, there is renewed hope for this great area of Houston. Meyerland is being reborn. It has a different feel already as so many people have, like what we did three years ago, also demolished their homes and their empty lots wait for their new (elevated) custom built home. Then there are the many people who chose to elevate (lift up) their existing home. Meyerland was filled with sprawling ranch homes and some people really did not want a two and a half story home like the one we have as they age in place. They loved their old home space, and in this day and age and with technology and engineering, raising their old home (concrete slab and all) five to eight feet in the air is something that can be done for a price.

Meyerland one year later is a hub of building activity. There is construction everywhere the eye can see, and workers buzzing like busy bees clogging our streets with their big trucks. New beautiful homes, some bordering on mansions, are being built. Plenty of our friends and acquaintances have chosen that long, expensive, and arduous route of building new and high up. We are so excited for them as we know the feeling to still be here on our old lot with a brand new home. It will be a while until they return though, as it is a long process. (Now about 2 years or more where it took us 19 months.)

Other friends have elevated their homes and restored the interiors, and are finishing up and moving back in. A few decided to fix up their homes one more time and give the widening of the bayou and other flood control measures a chance. Those people are hopeful Houston will finally take flood control seriously, and mitigation measures will take place.

Many too have completely given up on Meyerland. They have sold their homes, or lots, for a much lower valuation than we ever had here, and young families are scooping them up due to the bargain prices. (Again, the great schools are a draw.)

I can’t judge anyone for their deeply personal decision. It was, I am sure, a wrenching decision no matter which route they chose. And those decisions had to be made while they were in the midst of the profound grief that no one knows unless they have lost their home. (So many have said to me after they flooded, “Arlene, I really did not understand what you went through until I went through it. I am sorry.”) Yes, it IS grief for the loss.

It’s hard to believe, but it is now one year later after Hurricane Harvey wrought its destruction. Instead of the ghost town I once saw, now while walking the neighborhood, I see signs it will return to glory. It is almost like Meyerland is waking up after a long, deep sleep. It is going to come back better than ever – certainly more glamorous than ever, with all of the new custom homes. I would estimate about 20-30 percent of our neighbors are back or close to getting back into their homes. Again, it is a long recovery process. I wish and hope for more and more to get back in soon.

And now, to demonstrate for you all to see, my husband took photos of what is going on in just two typical streets caddy-corner to our own so you can see the progress. Something is happening on most of the lots. Some are still empty lots, waiting for that new home to be built. Houston Strong. Meyerland Strong. One Year Later. May you go from strength to strength Meyerland. 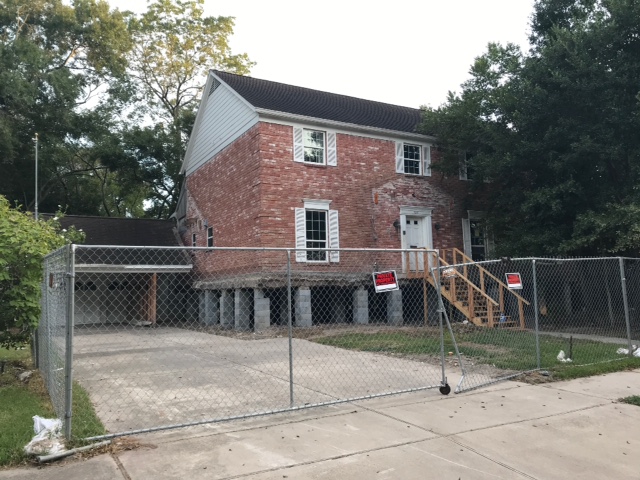 The above shows you what elevating looks like before it is finished. Below this are two more that are completed in elevation. 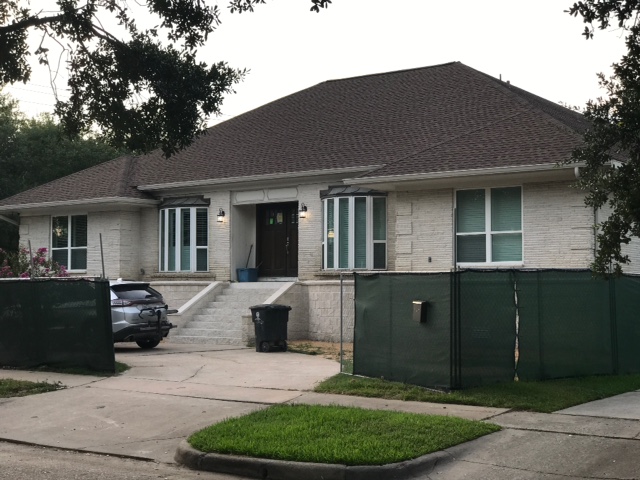 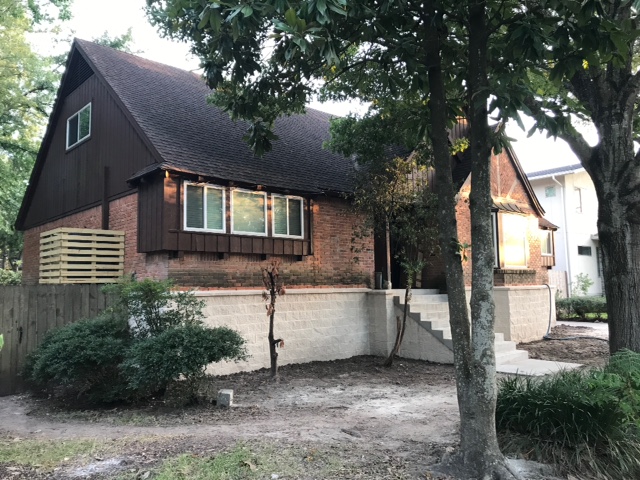 And some of the new construction: 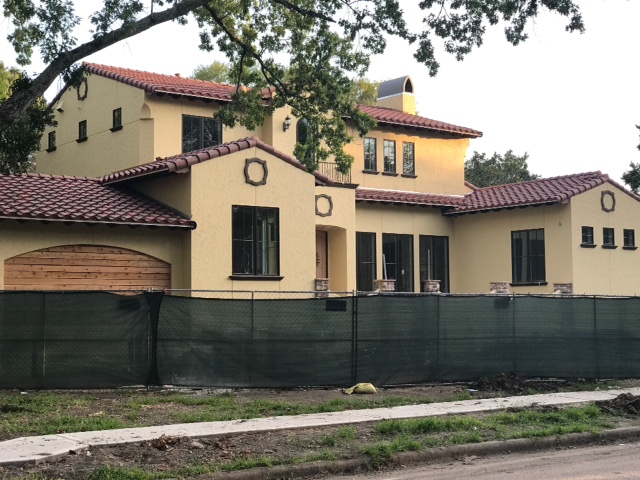 Right across the street from me. 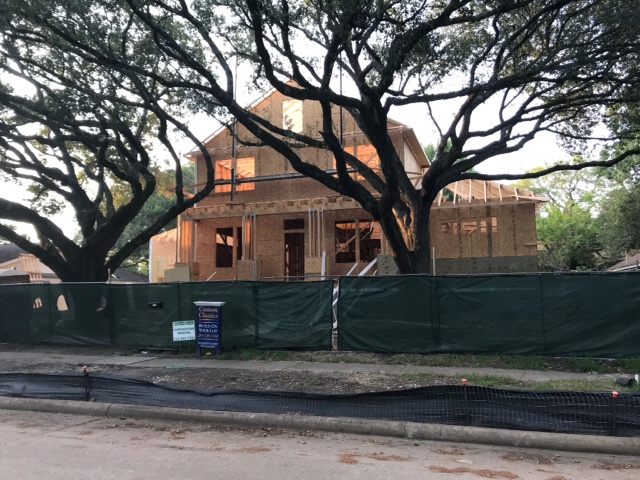 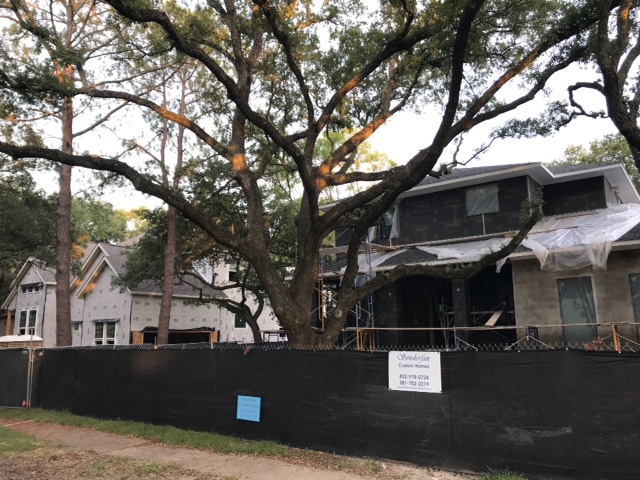 Two new homes in a row.