Not Narcolepsy, Only Napping!

Have I metnitioned before how much I adore my husband? Though I tease him in many blogs just because there is so much fertile material there to use, I really love him – quirks and all.

And Gary, my husband, is the first to admit he marches to a different drummer and he also acknowledges that in many respects we are polar opposites which makes for great comedic material in and of itself.

For example, I am a fastidious dresser, hating to go out looking less than perfect and yet I am opposite in keeping our home perfect. I am from the slobs in that respect to the great annoyance of my husband. As previously blogged about here, Gary is not at all concerned with neat and elegant appearance on his person, yet he goes crazy about neatness and fastidiousness at home and hates how I keep my spaces at home in in the car. He is a neatnik and I am a slob in organization etc.
Go figure.

We accept each other for these opposite traits though I will admit it creates an argument or two or dozen every so often.

“You’re like Pig-pen,” Gary shouted at me one day (the Charlie Brown comic strip character)  when he saw I left the kitchen a mess. While yelling this he was wearing the same sweatpants and old tee shirt for two straight days.

Lately I have noticed how opposite we are in energy levels. We are only two years apart, but I am an energizer bunny during the waking hours, never stopping for a moment and certainly not at all prone to taking naps unless I am ill. Gary is not that way and he can drop everything and fall into a deep slumber no matter what he happens to be doing at the time. In fact, a stranger might suspect narcolepsy.

He could be working on a puzzle one moment and fall into a deep sleep the next moment, pencil still in hand as demonstrated by this photo. 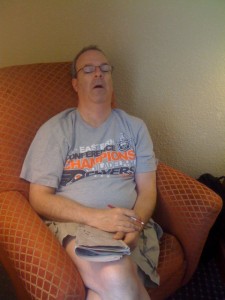 Note the paper and pen still in his hand.

In other words, when sleepiness approaches, he embraces it wholeheartedly, but I will just do some form of caffeine and keep on going.

Gary is annoying on planes as well because while barely pulling out of the gate and in mid conversation, he has already nodded off. It doesn’t matter if I am flying three hours or twenty hours, you can be certain I will not log a second of sleep unless I pop an instant blackout sleeping pill – which is now a necessity on transcontinental journeys.

In fact I am fascinated with anyone who can fall asleep in anything other than a completely horizontal position because I am the type that has to be in a bed with a pillow and covers, and of course horizontal, to even think about sleep approaching.

Growing up, I had a grandfather on my dad’s side who was a tall elegant man with white hair from my earliest recollections of him and he was also prone to cat naps while sitting upright. Only when the head sways would begin would any of suspect that he had departed from our company to slumber a bit.

My dad inherited that quality and that’s how my husband is too, except Gary has perfected the firm, rigid posture with rarely even the open mouth or head sway to give away he has fallen into a deep sleep. He will continue holding paper and pencil and maintain the same position. Most people would drop their items as they relaxed into sleep.

Just the other day we were in a long graduation ceremony for my daughter. It was only for advanced degree candidates, and they did the master’s degree first so my daughter was finished early. We then had to sit through all the doctoral hooding ceremonies which took forever – about an hour.

No matter to Gary. While sitting in a tiny stadium seat with minimal leg room and a low back, while dressed in a suit and ite, Gary closed his eyes. We thought he was relaxing until it became obviously that he was sound asleep in that rigid posture. Other family members were teasing him but he didn’t hear a work. In fact, he awakened refreshed when just four hoodings were left.

It was a brilliant move, and we were all completely envious so he caught some major grief afterward from others. It didn’t bother him a bit.

They say naps are so healthy and they help restore and regenerate the body and mind. Certain cultures make a regular habit of including times in the day for naps in their daily lives. Perhaps Gary was meant for one of those cultures, because he sure knows how to power nap no matter when and where.

So warning, if you happen to be around my husband at any point day or night and he suddenly stops conversing, don’t take offense because probably he’s only briefly napping.