When Photos Were Few and Far Between and Mostly Photo-Fails

I saw this meme recently and it expressed something that I had been wanting to put down in a blog for the longest time. It is yet another blog about the “dark ages” (before modern technology) that my peers and I grew up in. I lived this meme and can prove it in the photos I am posting below in this blog. 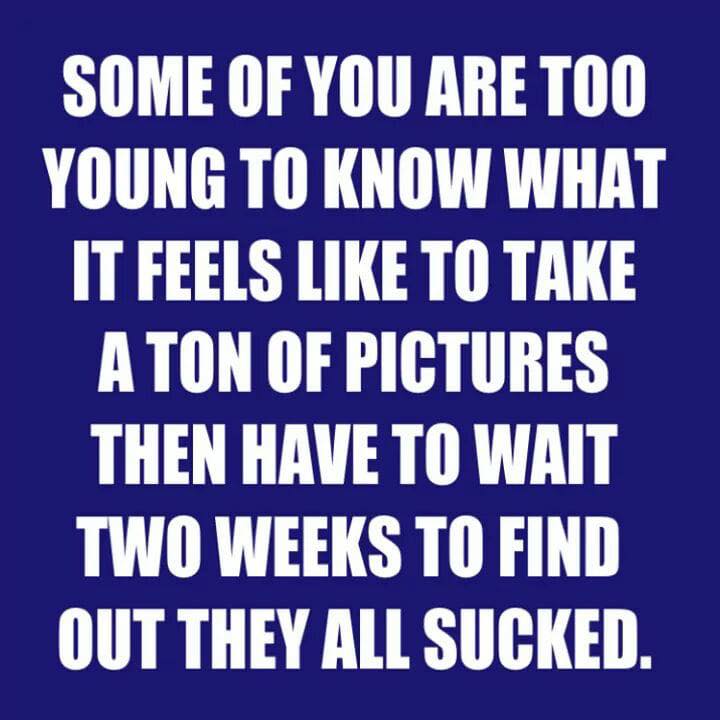 These days, of course, photos are taken by the ever-present cell phones. So phones are now capturing every moment of every activity known to mankind. Suddenly photos of food in restaurants is in vogue. It was so much bother to take photos and get them processed in the past, photo taking was reserved for very special occasions.

First, you had to have a camera. Not all of us did, the way everyone now has a cell phone with a camera – and thank you to the genius tech people who thought of that combination. (And please read this fun blog about telephone communication in those days. Chances of reaching someone was an iffy proposition due to busy signals and no answering machines, and of course, no cell phones tethered to people.)

If you had a camera, in the days before the film cartridges came out that just snapped into the unit, (and thank you inventor of that too as it was so much easier) you had to wind a roll of film into a camera, and then make sure not to expose it when removing it to send to a film lab that took weeks to process and mail it back to you.

I recently had the pleasure of seeing group photos from my old overnight camp, closed since the 1980’s, taken by a professional photographer. Camp Council, (a Jewish Federation sponsored camp) had so many of us Northeast girls going there for 2 1/2 glorious weeks of fun, sisterhood, and days that faded into singing around the campfire and late night bunk raids. It is a darn shame that there are no photo memories of those great days; they are all stored up in my mind, but what I would give to see more of those moments captured on film.

In those days (1960’s) it was rare to non-existent for girls to bring along a camera and film. It was expensive and then when you did send away photos, you had to cross your fingers that they came back developed. Between putting in and taking out the film, it was a bit of a gamble on whether or not the film would be exposed and you chances were that you could get a roll of blank negatives back. (No names will be mentioned here.) You waited weeks for them to come back with great anticipation, and it was a huge disappointment to have no photos to look at at all.

If they did come back developed, sometimes there was a roll of 12 photos and about 10 of them were blurry, off subject, and just terrible. We paid money and waited and waited, and there were maybe a total of two usable photos per roll. And that was because although those little cheap 35 mm cameras were autofocus, more often than not, we would not hold them still enough for that to work or did not know how to let that work for us. We just snapped away. We were unaccustomed to taking photos so we were not the best photographers. (Some of us were terrible at it. No names will be mentioned here.)

Another thing is that we used to take only one or two photos at a time and then “save” the rest of the roll for other things. Sometimes it would be months or up to a year’s events on one roll of film. That is because it was expensive and a nuisance to get developed. So if those one or two photos of an event turned out blurry or bad, tough luck.

I am still in touch with some old boyfriends and friends, and many of us reminisce that we would have liked for there to be more photos of our moments together. So I had been thinking about writing this one for a long time. My friends give me the best ideas.

Our own children certainly do not have that problem, as they all had little cameras with film cartridges (or the built in camera and film thingies) and ONE HOUR photo developing while growing up. My daughter has tons of camp photos, and loads of photos from all the fun times of her life.

It was another great invention when all of a sudden there were the little cameras of film you could purchase without having to own a camera. (They still sell these.)You just simply shot the photos and turned the entire camera and film back in. ( I am grateful for the invention of one-hour photos as my children’s photos were mostly developed quickly by that era. More instant gratification than we ever knew before!)

And now, of course, all of this generation will only know photo saturation, where there are way too many photos it seems. There are selfies galore, Instagram postings by the minute, Facebook postings, and photos captured from just about every moment in time.

I don’t know who started it, but someone decided to put their feet on display on a camera on vacation to demonstrate their relaxation, and then all of a sudden, feet in the sand, or by the ocean, or on a cruise ship, were a bulk of all of the photos I saw on social media. I definitely joined in the movement, much to the dismay of one or two of my friends. I think that I am ready to leave that trend behind now that I think of the past. Can you imagine way back when photos were few and far between….. who would have ever wasted a photo on their feet? No. One. Ever.

I also remember the days when you went to a concert and there was a rule about no cameras or photography allowed. In the days before cell phones, that rule was actually enforced. Now everyone records practically the entire concert. I try to enjoy most of it, and let someone else do the videos because I want to see it outside of that cell phone lens. (Thank you Gary and Linda!) But when you look around, you see thousands and thousands of people with their cell phones up, recording and snapping photos. I wonder what the artists think, but there’s nothing that can be done about it. Since concerts are the happiest of entertainment events for me, I enjoy reliving those moments and yet I also want to enjoy it live.

Starting with my husband coming into my life and teaching me the value of scanning and saving hard copies of old photos on a computer drive, I started digitizing my old photos and even memorabilia. It is great to go through files and find old photos easily this way. (Computers – another genius invention.)

Getting back to the meme above, show me your photos that prove the point of the meme. I will share a few of my own here and tell a bit of a story behind each one. Please note that the description of why it is so disappointing is BELOW the photo: 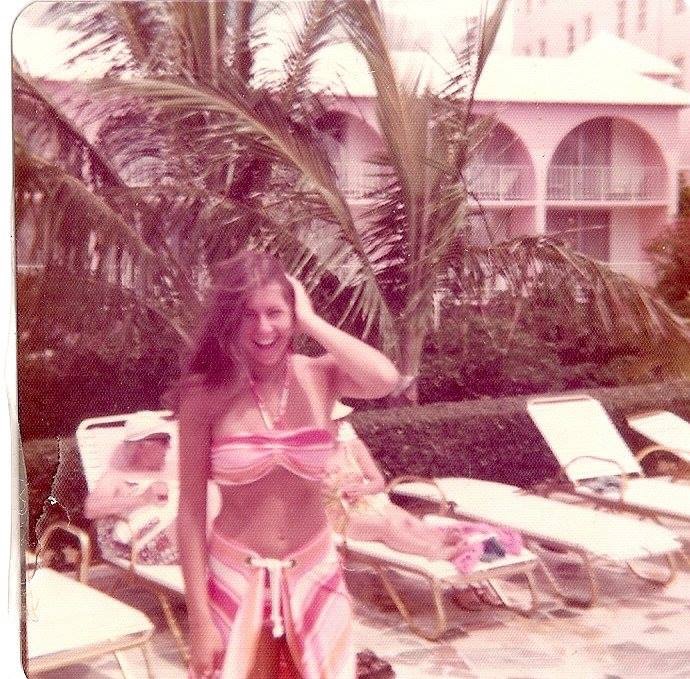 This was my first trip to Florida and a time of utter joy when I was 19. I wanted a photo in the entire bikini and skirt ensemble that was a purchase that I was so thrilled about, but half my body was cut off AND it is very blurry, and the chaise lounges are featured (with people in them!) so prominently that it is a ridiculous mess. And I didn’t find many other really good ones of people in the roll when it came back to me weeks later – just scenery. That whole roll was a failure. 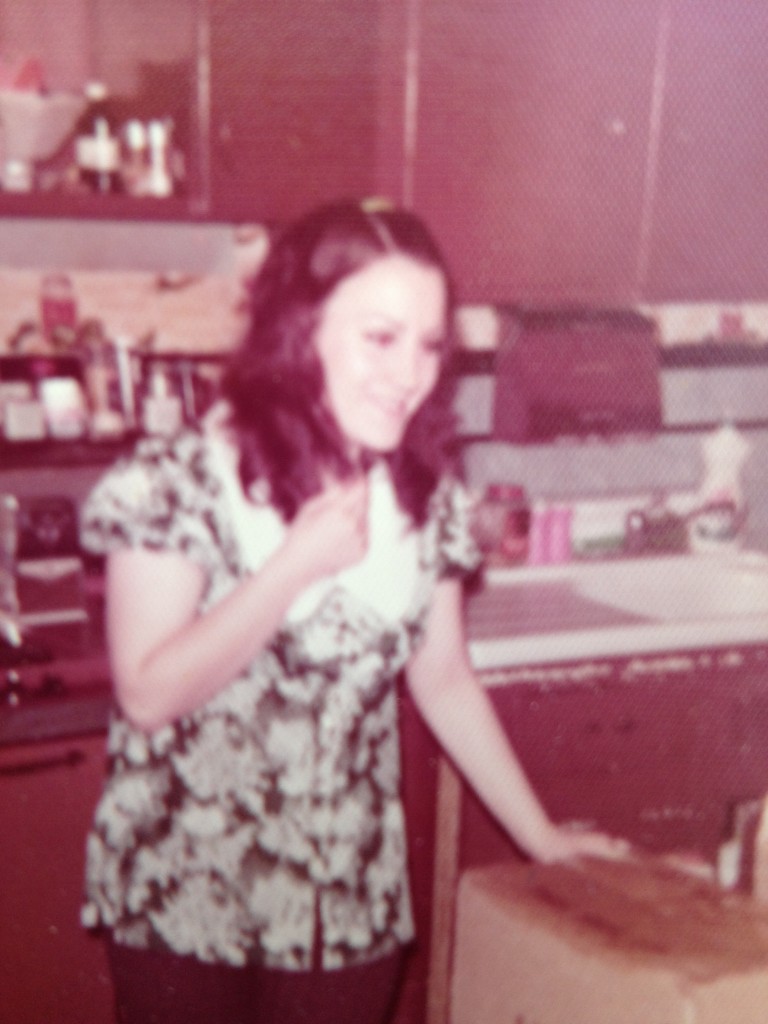 This one is SUCH a heartbreak. Not only do I have just this ONE PHOTO of my penpal Vicki from New Zealand’s visit to my home in 1972, but it is so blurry and there were none that came out of the two of us together! How rare it was to have a foreign visitor like this, one who came all the way from the other side of the world, and we don’t have photo memories of this visit or with the two of us together in a photo. 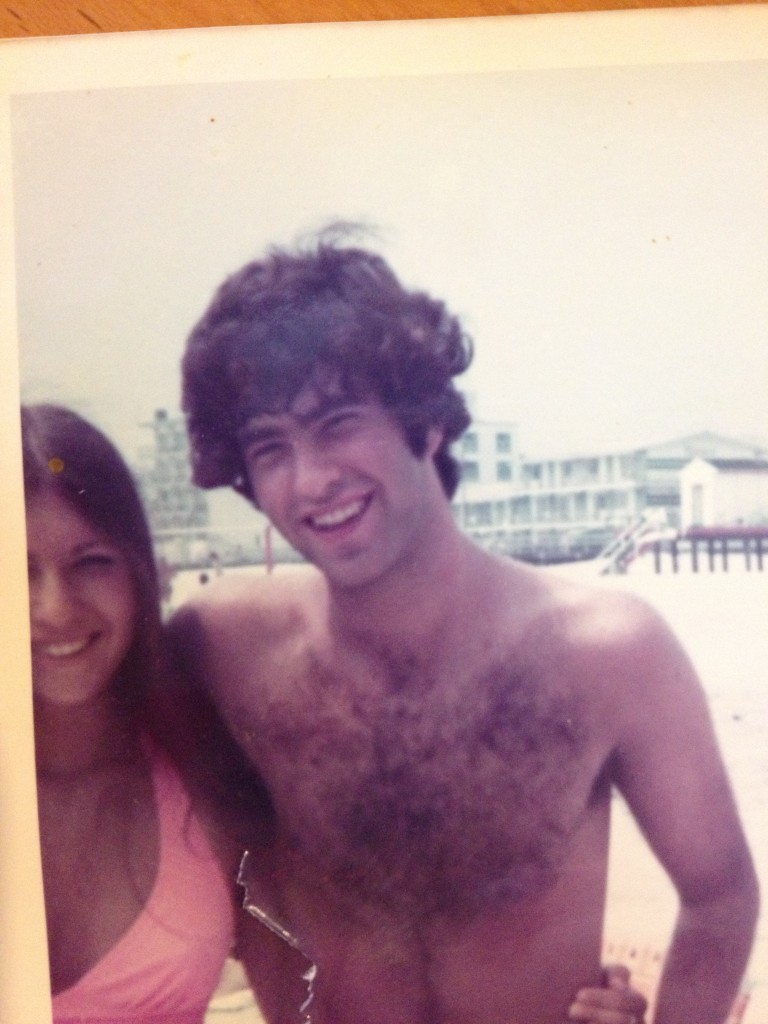 This one above would be my all-time photo FAIL. Despite going with the above boyfriend for three years (THREE YEARS!) this is one of only THREE photos of us together as a couple —- in THREE YEARS – that’s how rare photos were. (We are still in touch and have discussed our regret that our moments were not captured.) Back to this day of the photo above, I was so excited that we brought a camera to our day in Atlantic City on the beach and we were both so relaxed and happy. His sister snapped this photo and it could have been a fantastic one of the two of us together to remember each other by, but I am mostly cut out of the frame due to poor photography. When this roll came back in the mail, I just cried and cried.

NOTE: Of all of my boyfriends from the old days that I have blogged about, I lack photos of the two of us together on most of them. That’s just the way it was. That would never happen now where everything is captured in a photo. 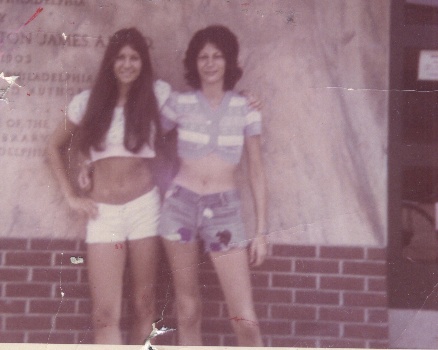 The above is my all time favorite photo with a bestie friend from early childhood on up. This is the only photo I have of the two of us together from those many times together, believe it or not, and it is completely blurry.

PS Sorry for all the cheesecake, but it seems that when photos were taken back then, that’s how we dressed!!