Remember a Time of Library Research before Google was a Verb?

I recently saw a very clever cartoon, posted on one of my favorite networking sites, Facebook.

Above the cartoon was a caption: Life Before Google, A Short Story.

It had two animal characters talking to each other. One said: I just thought of something I would like to know more about. The other answered: That’s a damn shame.

Giggle. So true. Do you remember the days before we could instantaneously get an answer to something we are wondering about by simply Googling or going to Wikipedia? Today, as non-tech as I claim to be, when debating on the date or details of any subject, I have been known to whip out my iPhone, and Google the subject. You don’t even need a computer handy to get virtually any information- just a smart phone. 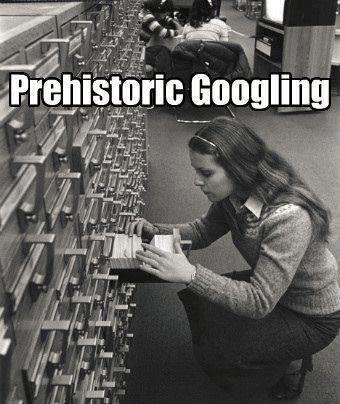 It’s a rare evening out with friends when there isn’t a memory lag on the part of one of us before it is a contest to see who can get their smart phone first, and Google the answer to who sung what or any information we can’t quite recall.

An avid Google user, I have even been known to Google for sport as well as stalk former flames. But after my chuckle over that cartoon, I thought back to the time when I was growing up (Insert “I had to walk five miles to school in the snow” here) when I needed to know something, usually in the form of a school assignment. Now I know we were dinosaurs compared to this modern age of instant info, so keep that in mind when reading. But perhaps those in my age range will find the scenario below quite familiar. And for those born much later, yes, it is a true story. That’s how it USED to be before the age of the Internet.

Received: Assignment to do a report on the Alamo. (I lived in Philadelphia growing up, so up to that time, I had no idea what the Alamo was about – and this is just an example)

We had a local library just up the street from me, but we had a more modern, regional library a bus ride away, so starting in upper elementary school, I used my Saturdays to take a bus to the library, where I would bump into all sorts of other students.

I proceeded to the card catalog trays. These were tiny drawers with cards filed by topic, along with names of reference books on the topic and their Dewey Decimal number. Once I found the topic, I would sort through the titles of reference materials, make notes on the Dewey numbers and proceed to that section of the library. Once there, I would find most of the ones I wanted GONE – seems like my report topic was always a popular one. But early on I figured out there if you lurked in the same numerals, you would soon find a few other titles with the information you needed in them.

Next, depending on how crowded the work tables were, I would either decide to make notes, or xerox information to bring home, again by bus. I had a pocket-full of nickels for the xerox machines – the early ones that produced oily copy that reeked of chemicals. If I wasn’t going to spend the entire afternoon reading the materials, I would wait in line to get my shot at the xerox machine after finding the pages I needed in the reference books and bookmarking them.

Everyone in line had a huge assortment of books that were bookmarked like mine. So with one or two machines (one was usually “out of order”) it was a long wait for the machine.

Once at the machine, I would usually make anywhere from one to three copies going width-wise when I needed it going lengthwise and vice-versa. I never could figure out how to set up the books properly on the glass to get exactly what I needed. Seems this was a common problem because the trashcan nearby was filled to the brim with other’s failed attempts.

Then, gathering my notebook and materials (we didn’t have backpacks in those days) I placed the reference books (never allowed to be checked out!) on the carts designated and walked to the bus stop. It was usually raining or snowy, but when it wasn’t, the job was even more torturous because I had to spend a nice day inside the stuffy library.

Once home, I would review the xerox sheets, and write the report by hand on lined paper in my own words and as neatly and mistake-free as possible. Note that this was before white-out, so if there were too many crossings-out, the report had to be re-written.

And so, I learned about the Alamo, and turned in the report.

Just the other day, I wanted to know exactly how Napalm was made. If it had been the old days, I could have asked a parent, but  many times they didn’t know the answer. In order to get that answer, I would have had to do all of the above, unless it was just a definition that I could have looked up in our home dictionary.

Just as that cartoon implied, many times, I just shrugged off wanting or needing to know something because it was just too much trouble. My inner curiosity was squashed just from the sheer work of what one had to do to find information.

One year we purchased a set of used encyclopedias that smelled very musty from being stored in someone’s damp basement. But yet, I was thrilled to have the information right there in my home. Much of it though, was outdated by the time it was handed down.

So next time you Google something, think back to those days when information wasn’t just a few clicks away. Technology is really amazing, isn’t it?