My son had dinner over my house last night and I picked up some BBQ at a neighborhood restaurant. While waiting to pick up the food, I took a good look around. Now let me just explain that I have never gotten food at this place due to the ambiance. In fact, we rarely dine-in there.  Still, I didn’t note the surroundings like I did this time. Perhaps it is because there is not much to look at, so I don’t even consciously think about it.

The booths and tables, and wooden decor was out of a 70’s time warp. I have been eating here for about 25 years and it has never changed. I wonder how long prior to my first visit two and a half decades ago it had been decorated or re-decorated? It could be decades before even that. And it doesn’t seem to matter either because it is a popular place to eat in the neighborhood. I am sure the owner thinks, “Why fool with success?”

I mean, why should he even think about updating or renovating if the customers still come back time after time and sit in the same old wooden booths and no one says a word?

When I got the food home, I had an A-HA moment that I announced to my husband and my son. My THREE favorite neighborhood eating establishments – the aforementioned BBQ place, a bagel coffee type shop, and a hamburger joint – all have not re-decorated or changed their decor since the 70’s. (maybe the early 80’s in the case of the Bagel Shop)

I thought this was ironic, and it made me wonder if it was the comfort food or the same-ness – the never-changingness – that appeals to me. (Let’s hope it is not the grease left over from decades of use on the grills)

Perhaps it is a bit of the comfort food they provide and the comfort of reminding me of my parent’s home? My parents are stuck in a 70’s time warp as I posted in the blog post portion directly below this paragraph and reprinted here.  Anyway, read about my kooky parent’s house just below and then weigh in as to why I am drawn to restaurants that appear as a throwback in time.

Parent’s In time warp: In the past many years since I have lived in Houston, whenever I visited my parents who live out of state, I have never stayed with them.  I always stay elsewhere because they have a small and uncomfortable place. But one time, I stayed there for a few nights and it gave me tons of comedy material.

I knew about this next little tidbit I am sharing before, but I never lived it: they live in a complete time warp. If it was 1975, they would still be as up to date as anyone. They have shag carpeting, green and yellow furniture (right out of a 1972 episode of the Brady Bunch)  plastic slipcovers on the furniture, no microwave oven, no cable television, no dishwasher, and no garbage disposal. Forget about a computer or any other tech device of the 80’s on. They would still have the same car from that era if it hadn’t died.

In fact, they had one of these relics on the wall in the kitchen. 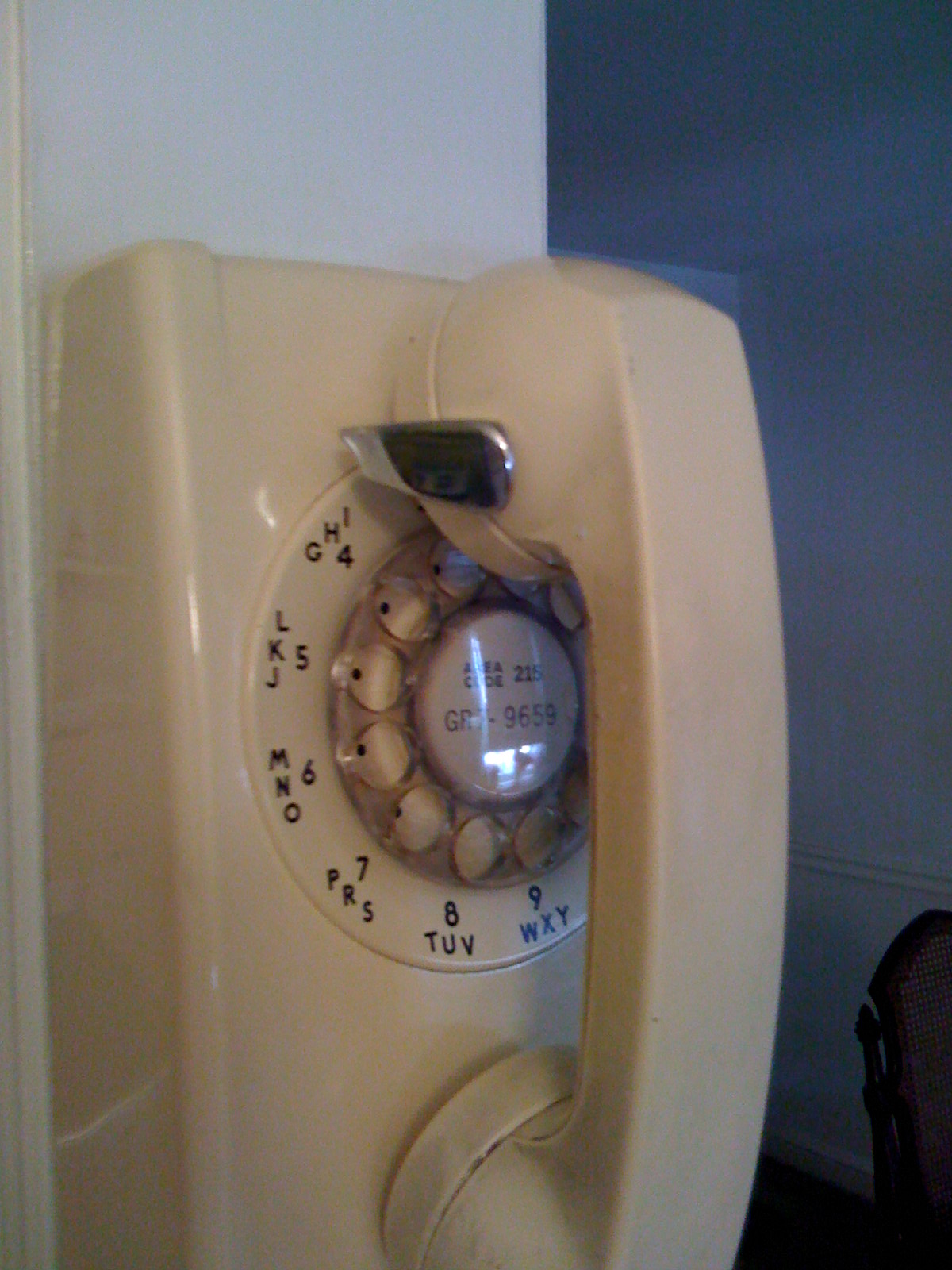 Yes, there are a few people that still have a rotary phone. Note that they don’t have an answering machine and don’t subscribe to call waiting either, because I still get BUSY SIGNALS sometimes when I call them on that land line. All of that technology that I lacked as a teen as described in this blog, is still the case at their home.

Aside from being a trip back to 1975 for me, there were other things I had to get used to in this short visit. I found out that ancient mattresses are almost unbearably uncomfortable and ancient pillows are as flat as the pillowcase that holds it. (Guess who went to BB&B the next day?)

You can now understand that my aged parents feel safe and secure only in their exact sameness. Everything must stay the same. They are otherwise very healthy and loving and adorable so I guess I am lucky, and the visit did supply a good amount of laughs. (And a personal pledge to avoid any of their patterns as a senior citizen.)

Side Note: In case you think it is mean of me to write about these quirks publicly, my parents do not mind at all because to them, all of this is completely, perfectly normal. They not only are not embarrassed, but they would argue against anyone trying to tell them differently.

Still, I am happy to report that my almost 82 year old dad has a cell phone. Yes, he has one of the few remaining rotary phones still PLUS a cell phone. My dad still drives and works part time so he got this for safety reasons (only to be used in an emergency!), and I am thrilled that he did this because now they don’t worry about the long distance phone bills when they call me, and I never have to hear busy signals again. (Although it is somewhat maddening that my dad won’t figure out how to use the voice mail on it)

I asked about their land line, and how much they pay for it. I was shocked. Get this: THEY STILL RENT THEIR PHONE from the phone company. So they have paid the equivalent of a small car by now for that old rotary phone, getting charged each month in their bill for it.

I tried to explain that they could buy a phone and save money from the rentals, but of course it was no use and when you analyze that they already paid thousands for it, buying another phone isn’t the best investment at this point.

So instead I tried to convince them after hearing the tally on their monthly land line, to get rid of it altogether. I pointed out that many young adults have ceased using land lines and strictly use a cell phone, saving loads of money. (I told them how cell phone also serve these young adults as alarm clocks, mini computers, GPS devices and scads more stuff too but that information did not translate well into 1975 mentality)

Of course what I was suggesting amounted to that scary world of “change” so it was immediately nixed. In their world – Sameness = security for them.

And besides if Hollywood ever needs an authentic setting for a 70’s based show again, I know just the place to recommend.