The Most Beautiful Movie Ever Made and Why

This was a blog I was sure I was going to have trouble writing. I wasn’t sure I could put into words (yes, me, the writer) how much this movie moved me and just rocked my world.

It was when I was thirteen that I discovered my all time favorite movie. I can’t even remember how many times I paid to watch it as a teen in 1968, but it was definitely in the double digits.

The movie was a teen sensation, “Romeo and Juliet,” by Italian director Franco Zeffirelli The fact that it was written by Shakespeare and had language and dialogue difficult to understand was irrelevant to me – and I know that probably kept some people from seeing it or maybe even enjoying it.

Before this film, I had never witnessed the wonder, the electricity, the magic and yes, the beauty of young love unfold on screen, and I was at a very impressionable (hormonal) age.

After mentioning it in a recent blog, (definitely worth reading by the way if you haven’t)  I recalled that it had been a while since I had actually seen it, and though I had a VCR copy of it from a long time ago and had enjoyed it many times as an adult, it had been years since I watched it. (The VCR era maybe because I don’t even have a VCR player anymore?)

I wanted to see if it still affected me now in my late fifties, the way it had when I was a moony hormonal teen, in love with the male lead, Leonard Whiting. (Oh and I adored the female lead Olivia Hussey too and wished to look like her!) 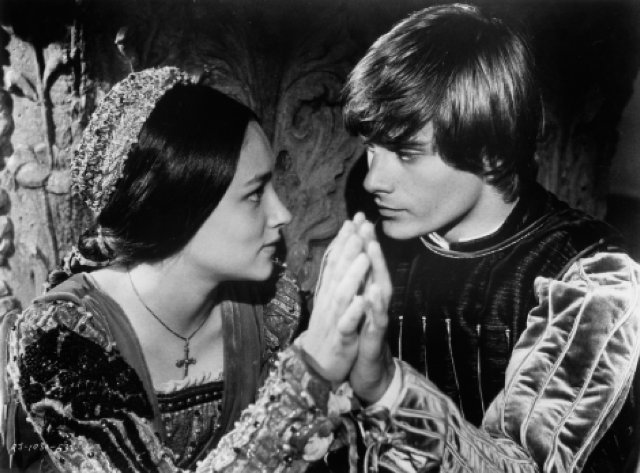 And then I wanted to write a blog to see if it still had the power to move me more than any other movie ever could move me.

The experiment had a predictable conclusion. OF COURSE it affected me the same way. I will attempt to describe why, apart from the obvious facts that I am a romanticist and a sentimental sap.

This movie is a pure Visual Feast. It’s a stunningly beautiful movie and puts other romantic doom movies like Titantic (which I loved) on an amateur level in my opinion. From the gorgeous costuming to the close-ups of the faces, the eyes, the expressions, the facial movements, the embraces, the way hands are used, the movie just leaves me speechless. In addition to all that, there is gorgeous music throughout. Each time I watch, I am down a few boxes of tissues with my sinuses completely cleared out.

I challenge anyone to watch this one time as I just did and just focus on their facial expressions from their first meeting, to the balcony scene, to their wedding night, to their death. Just study their faces. It’s amazing. They are young, they are fresh faced, and they are hopelessly, passionately in love. Pure raw emotion is delivered in every scene.

In fact, in researching for this blog, I found that the movie won the Oscar for best cinematography, and that of course means it was honored for the visual way the movie is delivered. I could not agree more. I could not imagine any movie more breathtaking and this is coming from a movie buff and fan. (Movie obsessions and favorites are the topic my very next blog so stay tuned)

It’s not only the acting, which is stellar, as the way the actors are used. It is utterly convincing watching the young and innocent lovers falling madly in love and losing each other, driving them to do what they did. 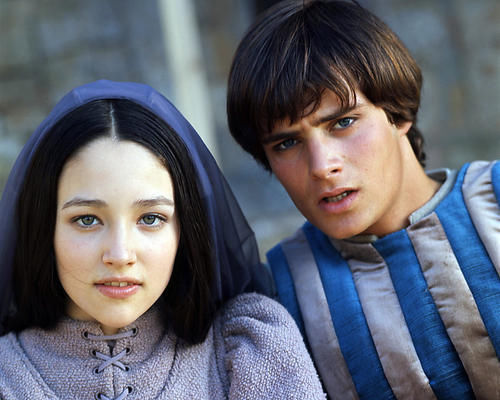 I am no critic, but I read some of the top critic reviews at the 1968 debut, and this is what Roger Ebert said in 1968 when it was released:

“I believe Franco Zeffirelli’s “Romeo and Juliet” is the most exciting film of Shakespeare ever made. Not because it is greater drama than Olivier’s “Henry V,” because it is not. Nor is it greater cinema than Welles’ “Falstaff.” But it is greater Shakespeare than either because it has the passion, the sweat, the violence, the poetry, the love and the tragedy in the most immediate terms I can imagine. It is a deeply moving piece of entertainment, and that is possibly what Shakespeare would have preferred.

The success of the film depends upon Whiting and Miss Hussey. Zeffirelli reportedly interviewed hundreds of young actors and actresses before choosing them; if so, then this is the first movie “talent search” worth the trouble. They are magnificent. We can see why Zeffirelli didn’t want older actors. The love between Romeo and Juliet, and the physical passion that comes with it, are of that naive and hopeless intensity only those in love for the very first time can comprehend.

And all of this is photographed with great intensity (even a hand-held camera for the dueling scenes) and beauty. As in his first film, “The Taming of the Shrew,” Zeffirelli has controlled his colors carefully. Everything is red and brown and yellow, dusty and sunlit, except for the fresh green of the garden during the balcony scene and the darkness of the tomb.”

Back to me: I watched this 2 ½ times this time around. (The half time was skipping through the fight sequences to get to the good stuff and study their faces like a film student), and each time I felt myself coming up with alternate versions to have a happy ending, all the while knowing the lovers were doomed.

What if Benvolio hadn’t seen or heard about Juliet’s funeral?

What if Friar John hadn’t been quarantined?

What if Juliet left with Romeo when he was banished the morning after they consummated their marriage?

What if Friar Tuck had whisked Juliet away to Romeo on Friar John’s donkey instead of the sleeping potion plan?

That’s what a really great movie does to you. You know the ending is tragic, but it is such a thing of beauty, you want the wonderful characters to get their happily ever after. And then you want to watch it again and maybe even change the outcome still.

Although the movie is now permanently mine on computer, I think I will take a break for a while. I am all cried out.

Did this movie rock your world? Share here, and if it did not, why and what was yours?