The Sad But True Tale of the Upside Down Bureau

There is a series of novels by Sophie Kinsella called “Confessions of a Shopaholic” and other Shopaholic titles.  I adore these pieces of fluff fiction, for the writing style, and for the content. The lead character, Becky Bloomwood – British – making her even cuter, is a Shopaholic who shops and buys, shops and buys. And I totally relate.

I have said many times in my own writing that I seem to have a shopping problem. Although because it makes me happy I don’t see it as a problem. I refuse to accumulate credit card debt so I only buy what I can purchase outright.

NOTE: Skip this part if you have heard it before –because you have to get to the hilarious bureau part –  I grew up poor, always going without and wanting, and so I started earning my own money at the tender age of ten. By doing that I figured out that if I made enough money, I could get whatever I wanted – so I have gotten educated and chosen good careers. (Sing along to Beyonce’s “Independent Woman” song with me, “The clothes I’m wearing, I bought it, the car I’m driving, I bought it…”)

Due to my buying problem, I was smart enough to buy the custom-made home of another Shopaholic – a man who had chains of formal wear stores around Houston; and who obviously liked liked clothes and purchasing and closet space and storage as much as I  do.  In other words enough is never enough and there is no such thing as too much. The original owners were especially a match made in heaven for me.

My closet is as large in size and square footage as the typical ENTIRE third bedroom in the home I grew up in. This is a good thing, because I use all the space. When it appears that I am miraculously going to FILL IT UP, (and if you saw it you would think it was miraculous for anyone to fill up)  I do the purge and many nice organizations benefit from my donations. My husband has his own separate walk-in closet, and there is a third walk-in (I know – unbelievable) in our bedroom/bath for good measure so space is never an issue.

There must be something in the DNA code for Shopaholics like me, because both of my kids have this disease. We shop, buy, shop, buy, shop, buy and take great pleasure in all of our purchases. Note: we do not hoard, because we all know how to purge. And don’t judge too harshly – we do not accumulate debt, and we are all generous with others to a fault. So it’s basically our only vice. And we LOVE bargains! Retail, Feh! (My son might disagree though)

Unfortunately though, my mini-me Shopaholic daughter Elissa is facing two issues this year. She is on a strict budget – which never bodes well for a Shopaholic, and her space in her modest apartment in Dallas is completely OVERFLOWED.

Growing up Elissa was completely lacking the concept of space and storage limitations, having had two generous and ample homes and bedrooms. When she entered the world of limited space in college, she was appalled, and had to compromise her sophomore year at her sorority house by only keeping seasonal clothes at one time, and hauling back and forth others to replace them when seasons changed.

Her modest sized Dallas apartment has one bedroom bureau and a smallish walk-in closet.This same poor over-burdened bureau has frankly had enough. Through the past months, it was working way too hard, bursting from the stress. It was just a matter of time before it had a breakdown if Elissa continued to shove things in it. Yet she didn’t pay attention.

So her bureau did this. 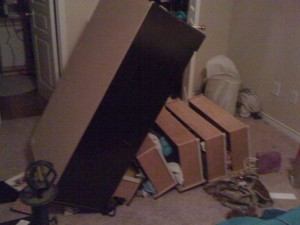 It just plain gave up, flipped over upside down and rolled over and played dead. Pretty hilarious, if I must say.  It was previously against the wall you see in the photo, so it did quite the flip.

The good news is that the bureau will live to see another day. As a solution, Elissa will get it bolted to the wall for safekeeping, but I don’t think there is a molly-bolt in this world that can hold her bureau together the way it is overstuffed. She also knows it is time to sort through and pay Goodwill a visit. Her closet has been giving her these clues too as she trips over stuff that isn’t quite fitting.

Let’s just hope that when Elissa settles down in her very own home, she will find a custom one built specifically for Shopaholics, like mine.