The Way the Universe Aligned with Houston This Time

I have to say that my neighborhood was pathetic on Halloween this year. It is still a ghost town, and neighborhood kids do not trick or treat with empty houses of people who were flooded out. Many neighborhoods in Houston were the same, and this year there was an increase in block parties and alternatives for children for Halloween. (I bought a ton of candy anyway, hopeful for some visitors, and left a bucket of candy with an Honor System sign out. It was all gone when I retrieved it later- hooray for whoever got the candy, thanks for taking it off my hands.)

Since game 6 of the World Series was on, and we were one win away, the city was more interested in that event than in Halloween this year anyway. We lost, and it was meant to be to go to Game 7 to clinch our Astros’ world title, baseball champions of 2017.

I have been in wonder ever since last night at how the universe aligned with the beleaguered post-flooded city of Houston. Here is a short list of many more ways the universe was on our side:

My 90 year old dad now lives in Houston, though he spent 85 years in Philadelphia. He loves baseball beyond all measure — it is his favorite sport. He watched more hours of baseball than any other human. (He used to listen on the radio and watch at the same time!) Although he has remained a die-hard Phillies fan, he is also a big Astros fan, and he gushed on like a young kid about the memorable baseball season the Astros gave my dad at the age of 90. When you are that age, there is not very much to get excited about on a daily basis, and so I have to think a bit of this happened for him in his adopted city with his adopted team.

(NOTE: When I first moved to Houston in 1981, immediately after baseball season where I was still working for the Phillies who had won the World Series in 1980, one of the first people I met was Larry Serota, who worked in sales for the Astros. Since he became a bestie, having grown up in my old neighborhood and was just a year older than me, I went to a ton of Astros games with his wife of blessed memory, Shelly. Back then, I was ONLY a Phillies fan, and could not understand how Larry and Shelly could switch allegiances and root for the Astros. After a few years, I understood. When you make your home in a town, you adopt the teams too, as my 90 year dad did.)

This is for my kids and all the wonderful friends and kids of their generation, whose parents mostly came to Houston from somewhere else, but who are natives born in this city. Finally, the natives have a baseball champion – and this goes to all Houstonians who longed for this moment since the Colt 45’s arrived here.

Crazily, Sports Illustrated not only boldly predicted this World Series win on June 30, 2014 (THREE years ago) on their cover, but they featured George Springer on the photo, and he won the MVP of the series. 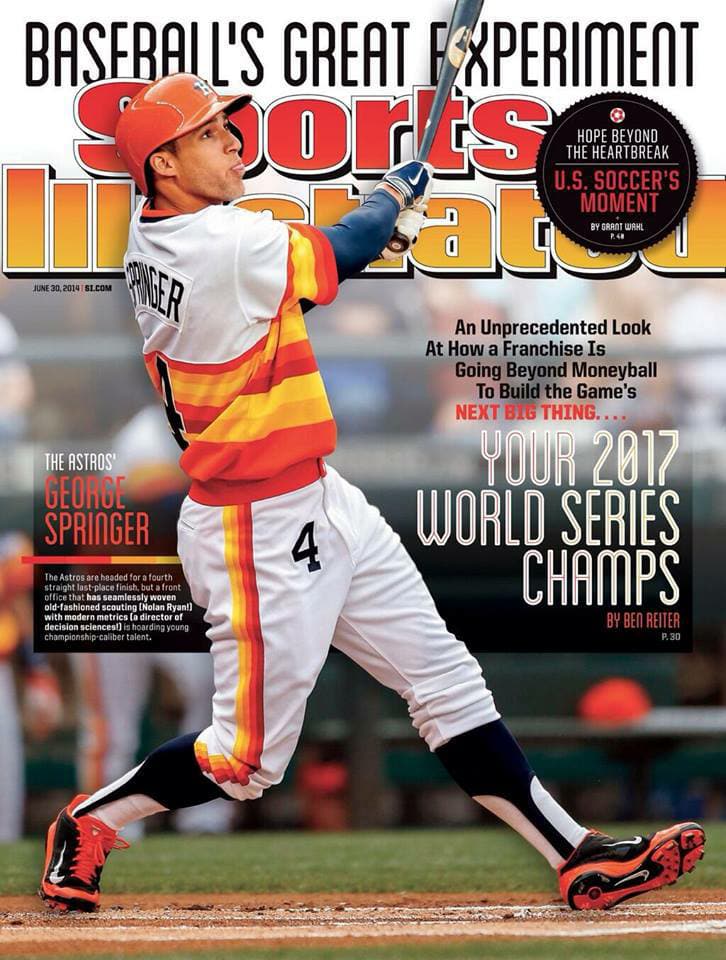 Eric Berger, the SpaceCity weather guy and the most non-hype, practical, and accurate meteorologist ever, (who used to publish in our Houston newspaper and since launched his own site) predicted NOT A FORECAST, but a deadly accurate final score at 3:30 in the afternoon on November 1, 2017, long before the first pitch was thrown. Here’s his tweet.  (Note, we got 51 or 52 inches of rain, depending on who was tallying, and so he chose 5-1) 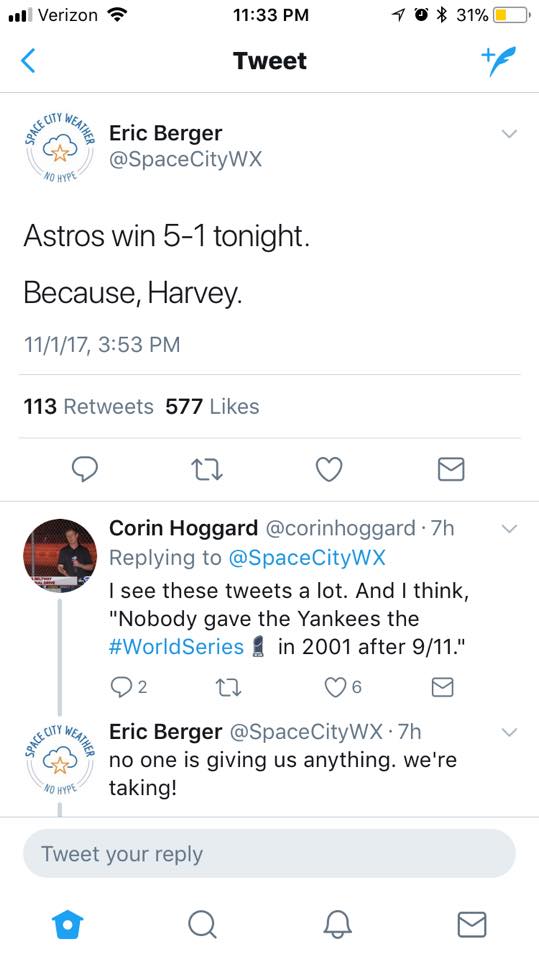 Carlos Correa, of Puerto Rico, and one of our superstars who helped us achieve the victory, wanted it as much for his devastated homeland (from Hurricane Irma) as he wanted it for the Houston community. Imagine his heartbreak at two devastated communities. He played with such heart!

Jose Altuve, of Venezuela, played his heart out too and in his stellar performance, and for my friends Malka and Liora, who worry every day about their relatives still there in a country in the midst of a crisis, he brilliantly represented their home country.

George Springer, who was/is a stutterer and had such a tough time growing up as a bi-racial child with a speech impediment, and who has done so much (in terms of clinics and pep-talks) for the speech impaired community, was deservedly MVP. He is a most valuable player ON and OFF the field.

Alex Bregman, only age 23, and who defensively and offensively kept pace with the superstars named above and was a key in this victory, is Jewish, and gives a super good-guy hero for all Jewish youth to look up to, rare in sports.

Those are just a few of the backstories, however, I cannot say how much this team – from players to the owner, aside from the spirit and rejuvenation they gave to a beaten-down city, gave in terms of money and volunteering when it was most needed. They call this a MENSCH in Yiddish. This is a team of mensches. (Yuli Gurriel, the guy from Cuba messed up a bit, but he is young and played in Japan so he thought it was ok – he tipped his hat at Yu Darvish last night to apologize.) They even wore a #HoustonStrong patch, the catchword of our rebuilding after the flood.

My old nemesis, Keith Hernandez, made a national appearance as one of the Fox Broadcast team. I can proudly say although he is a California native, he was for the Astros all the way. 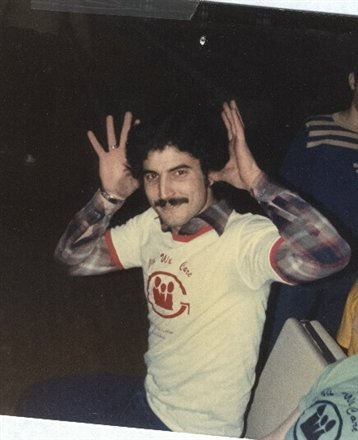 One last note about loving the Astros: When I was a kid myself, I thought teams like the Phillies and Yankees had the coolest names of all, because they were geographical rather than named after an Indian tribe, animal, or the color of socks. When the Astros came along, I thought they also had the coolest name possible – it was right out of Space Age and the Jetsons, the era I grew up in. Who knew then that I would spend more years with the Astros in my life than in the Phillies home town? I am loving some of the headlines around about the Astros being in orbit! There is an inherent cuteness about a space-age name. 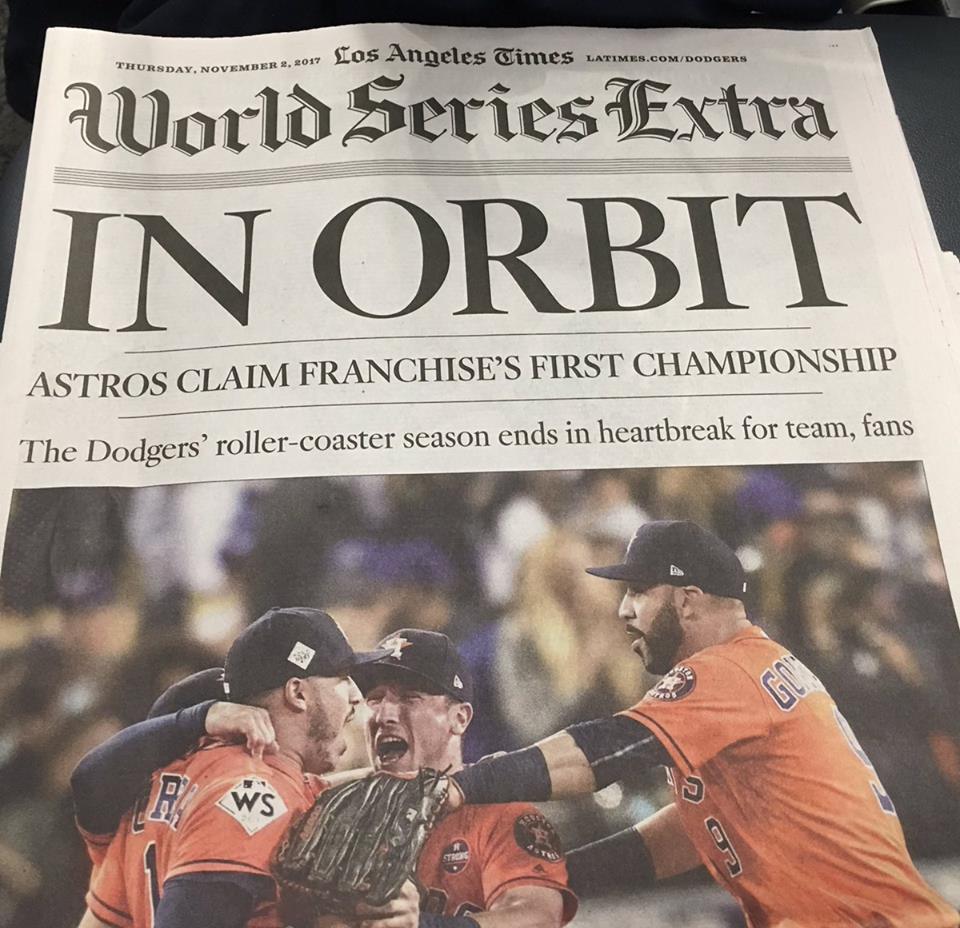 Yes, the universe beautifully aligned just at the right time on the first day of November 2017 to give this city something to be grateful for, and to celebrate! Here’s the freaky SI NEW cover, still calling us the 2017 World Champions, and still with George Springer representing. 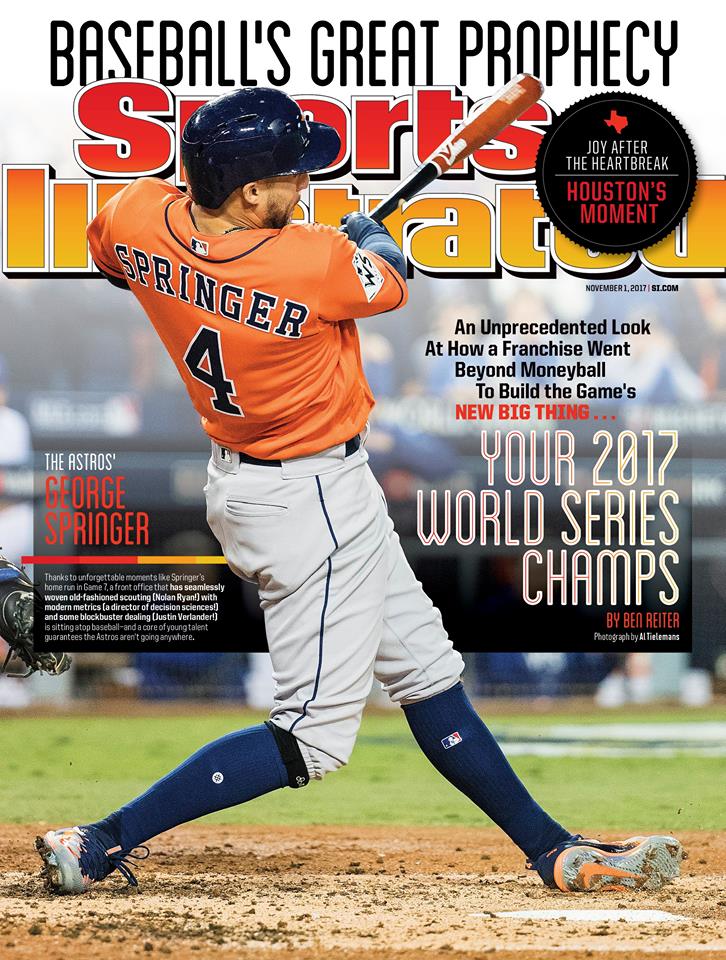