A Week of Pure Joy and Fun

I just saw a post from one of my friends on the Flower Power 2018 cruise that I just returned from last week. It said, “We had more darn fun than a human being should be allowed in a single week.”

I would have to agree with that assessment. There was more joy and fun per square minute than I ever thought possible. As I told my kids when I returned, it was as if I was in Heaven all week – I got to hear all of my favorite music non-stop all week, (Beatles included with the copy bands including THE FAB FOUR who are dead on with their impersonation and music), act like I was 15 again, and eat all I wanted whenever I wanted. We ALL felt like teenagers again and that was such a blessing for us to be in our sixties and feel so young. (Of course I gained a bunch of weight, even with trying to dance it off, but I am already peeling that off.)

The Flower Power Cruise is the brain-child of Star Vista Cruises. I will always be eternally grateful to them for coming up with a concept cruise where all the hitmakers of the sixties and early seventies perform on a ship that sails to exotic locations. (that travel is secondary in importance.)

I saw this year’s lineup and I signed up as soon as I could. Here is a list of who was on this cruise this year:

NOTE:We had some mingling and photo opps with them too. They particularly loved when we interrupted their meals for photo opps (I am being facetious here) and possibly had salad in their teeth as they smiled, but they were so gracious for the most part. I was always polite about my photo opps and did not bother them while eating. 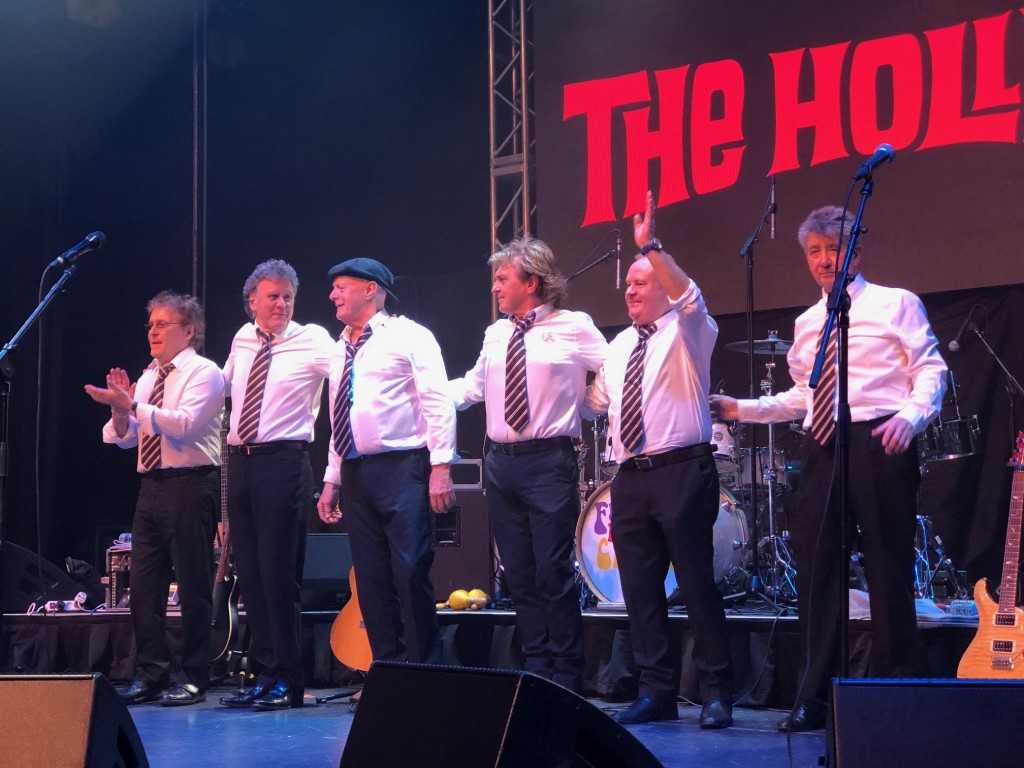 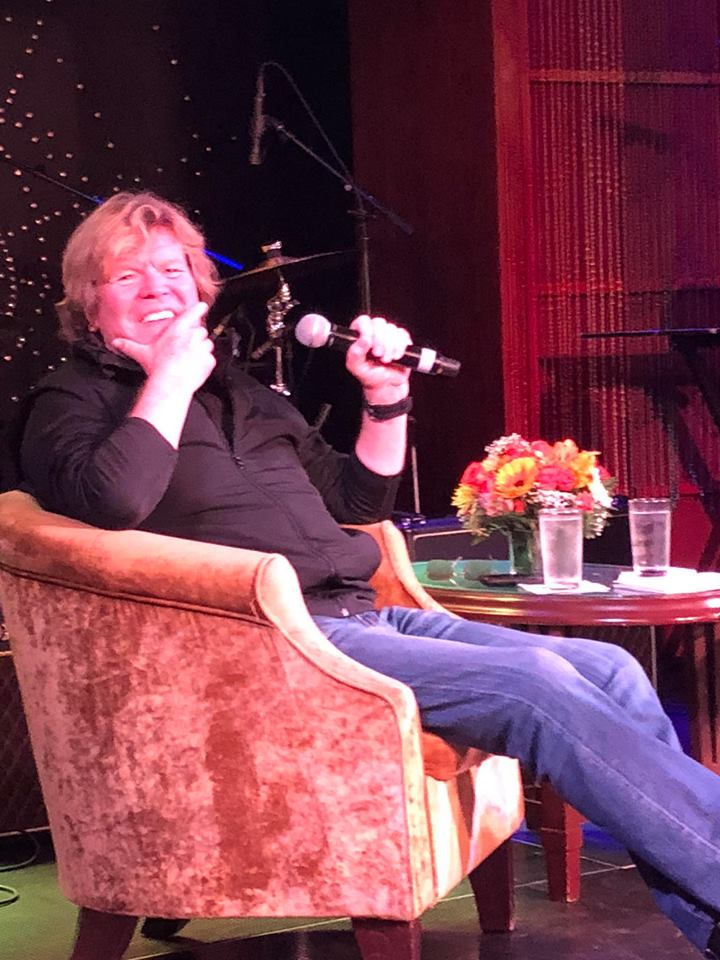 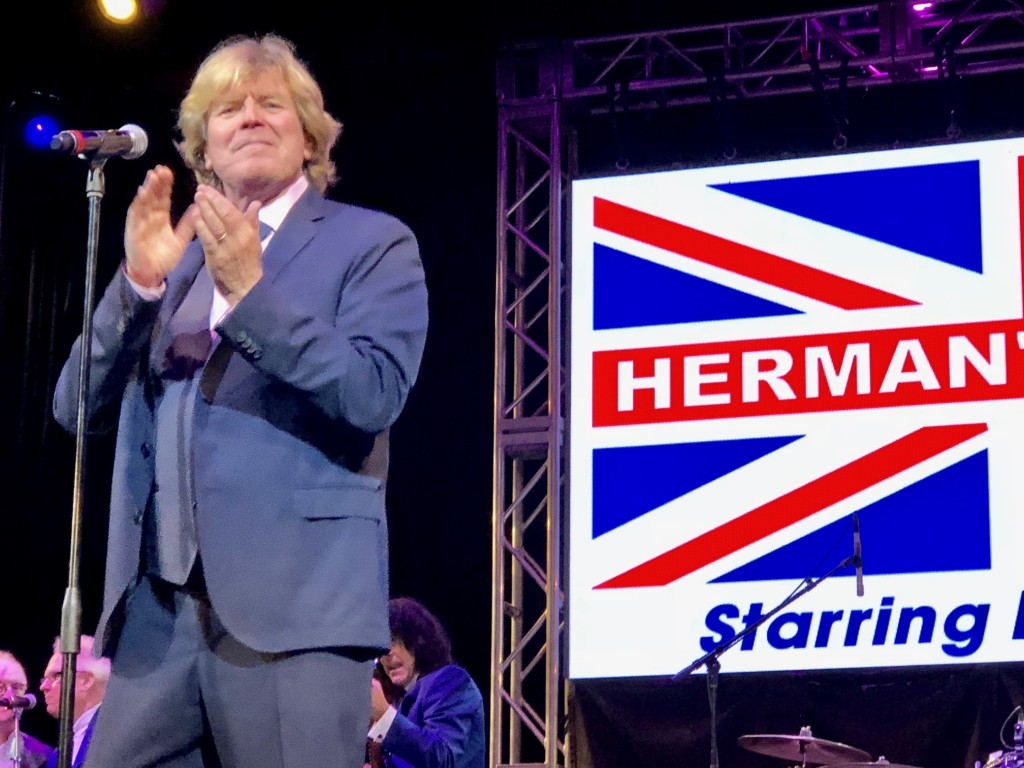 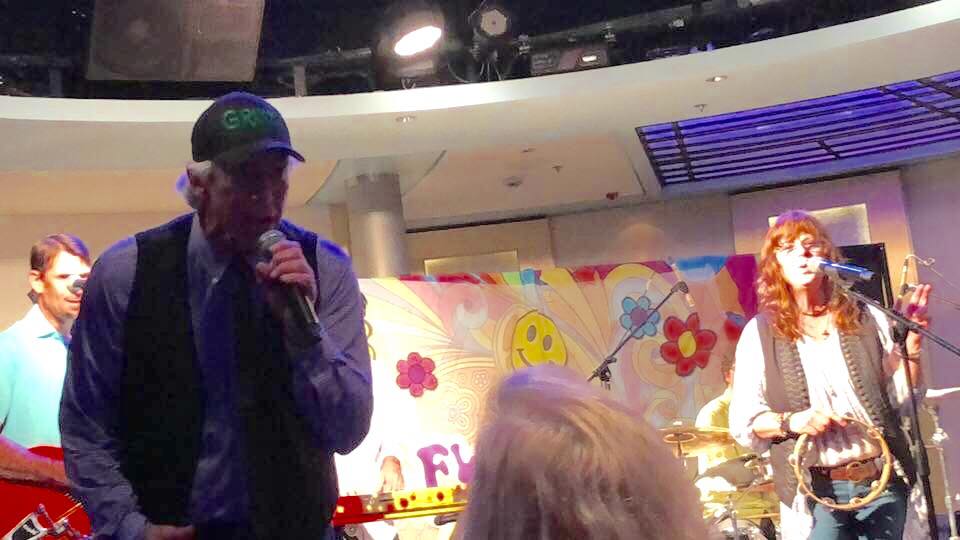 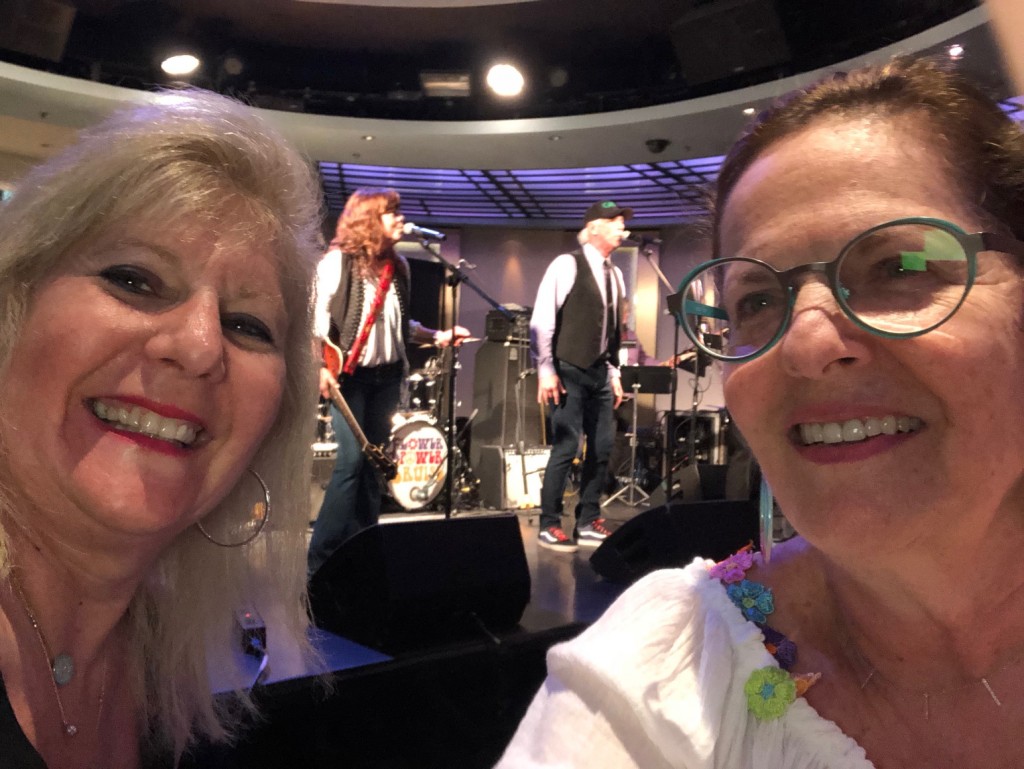 (Here I am with two of the original members! Jim Yester, and Jules Alexander – lead vocals still) 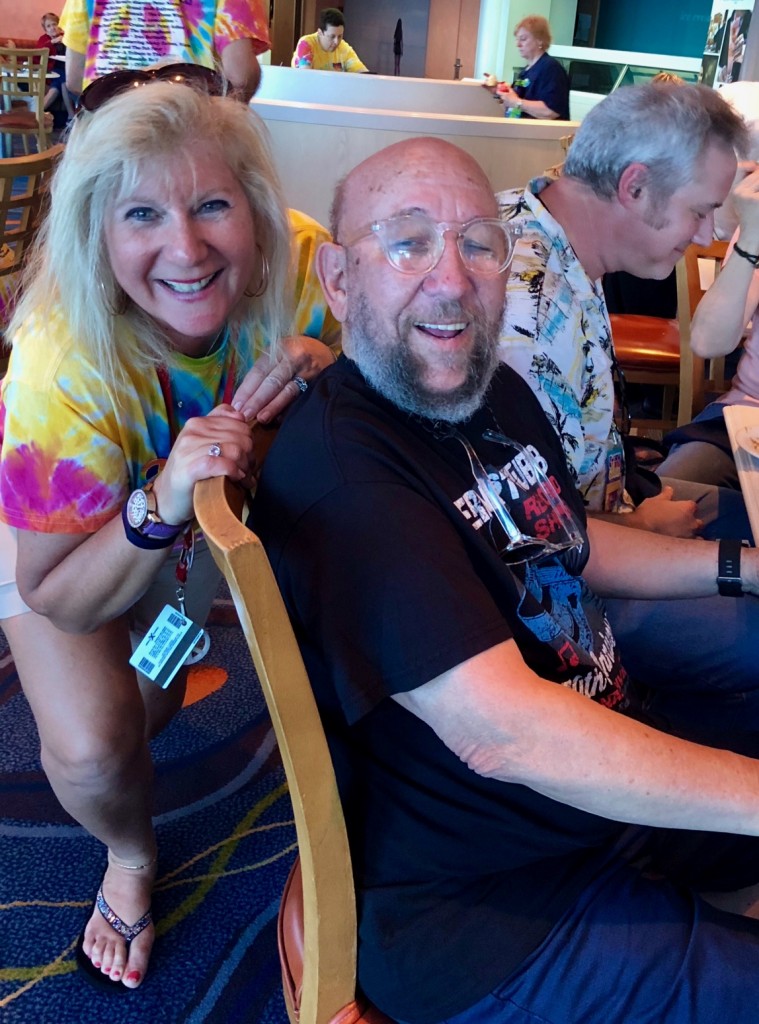 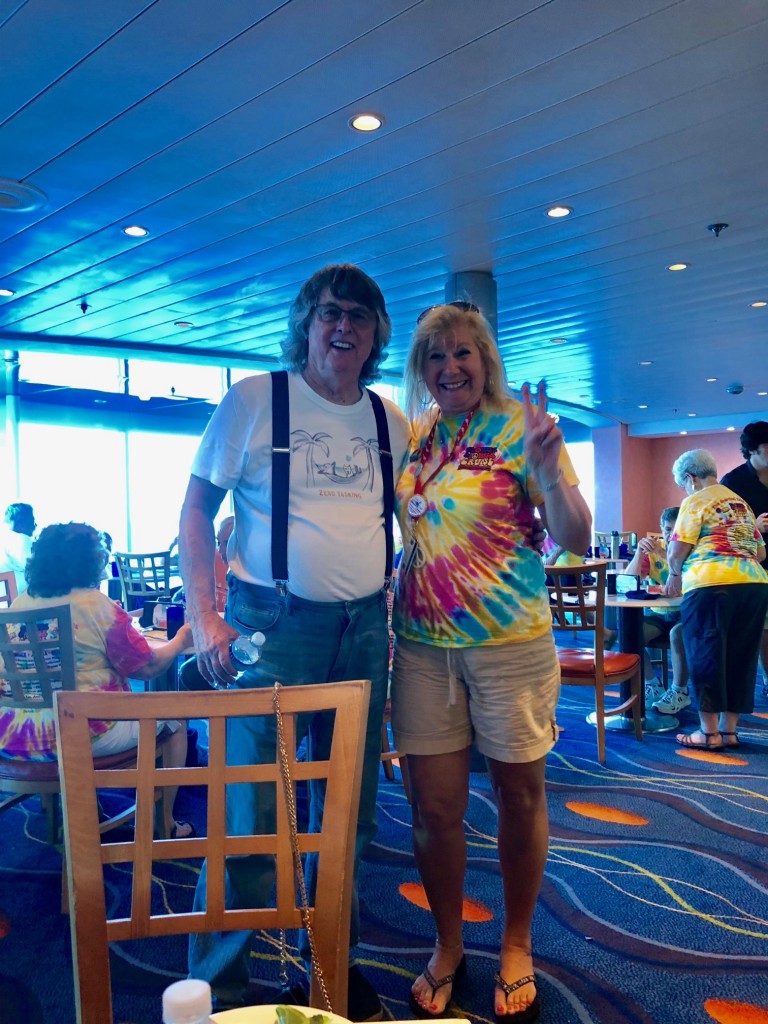 Here is my roomie and “double trouble” partner in crime Linda with the handsome original  Carl Giammarese and a photo of the other original singing Nick Fortuna. 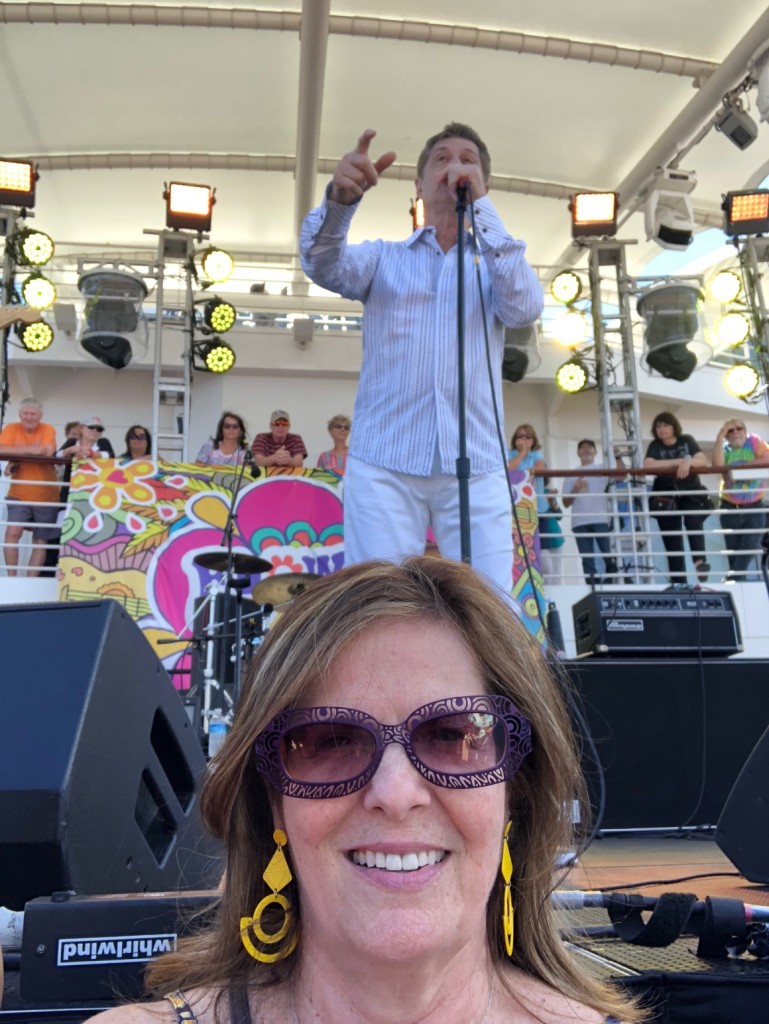 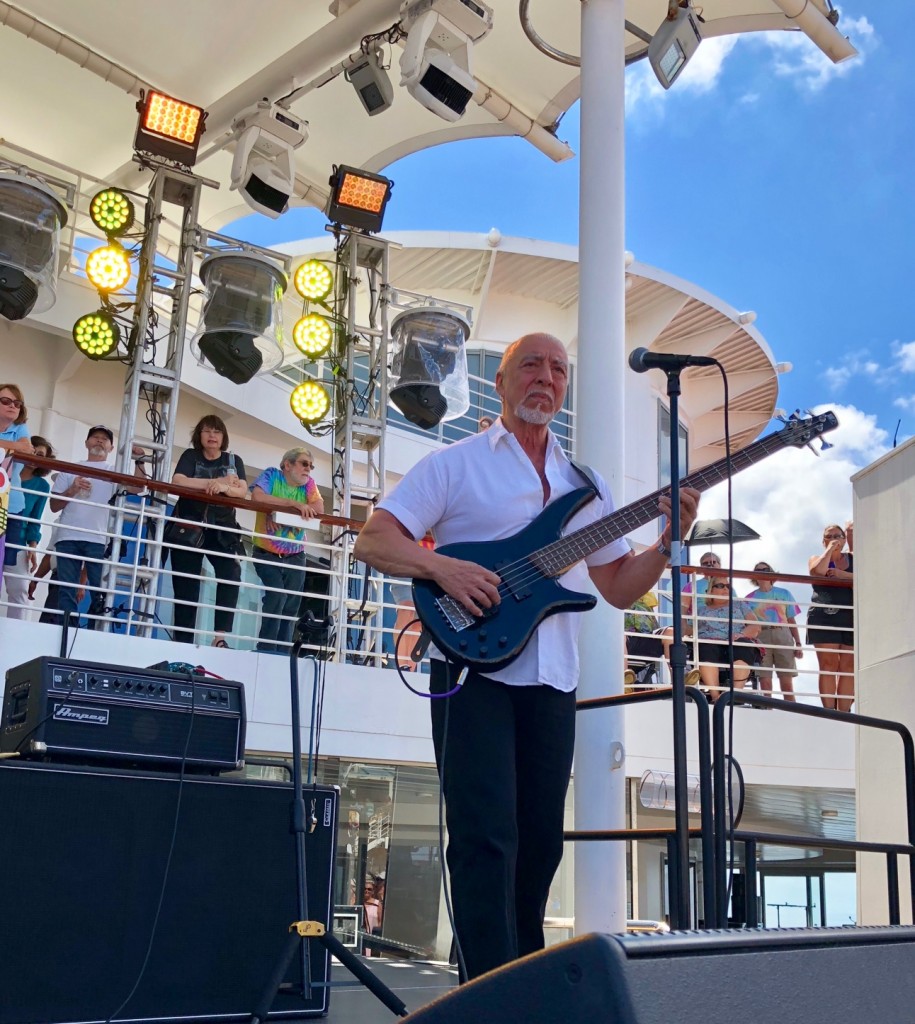 Here is Linda and me with the Burton Cummings replacement lead singer, great voice and a cutie, Derek Sharp. 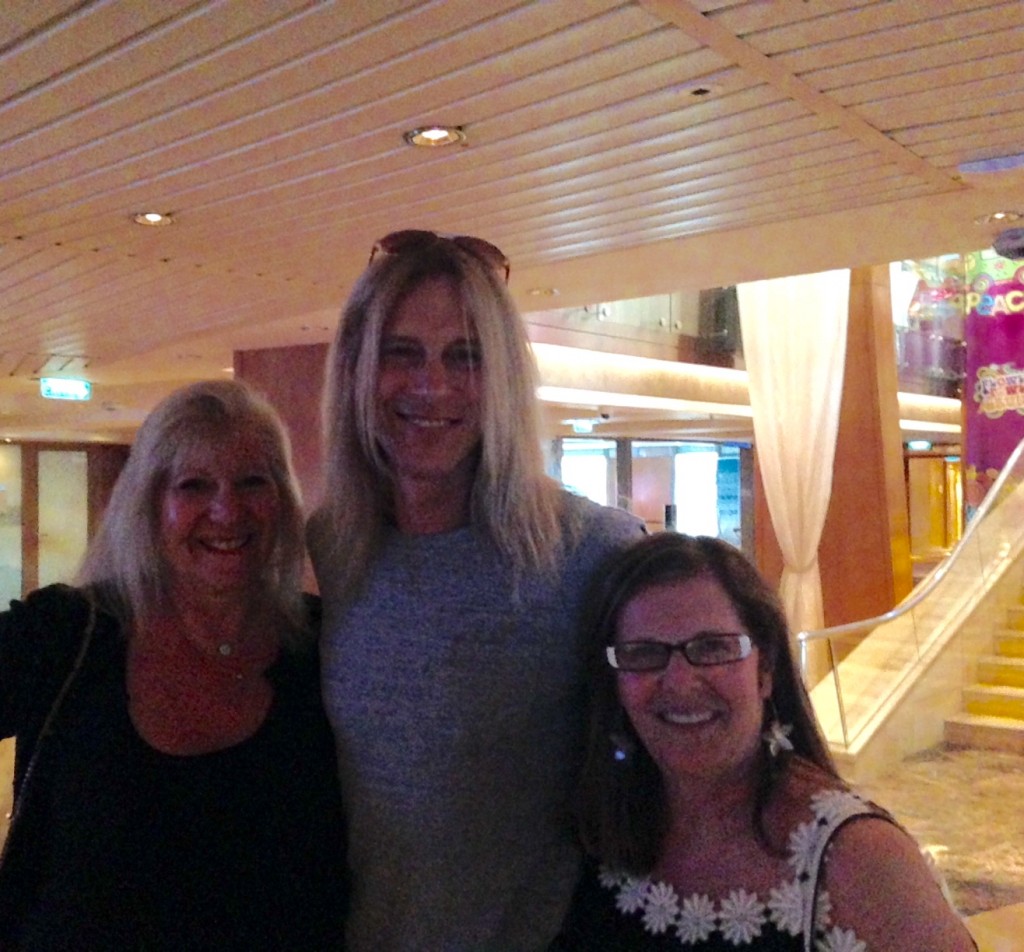 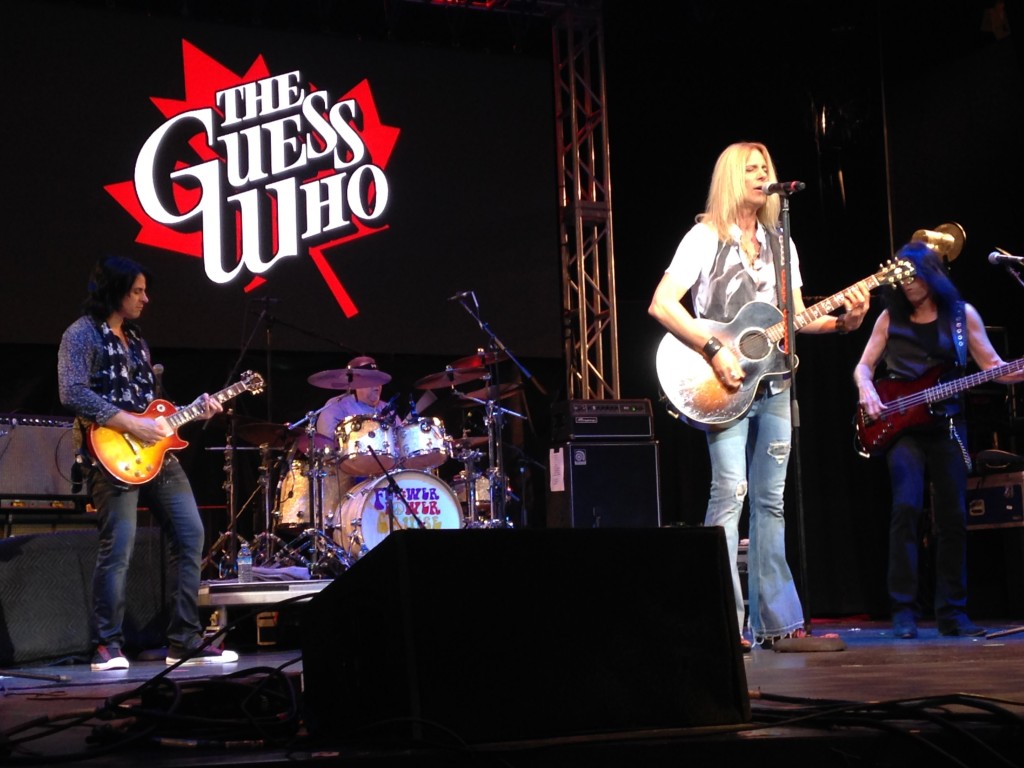 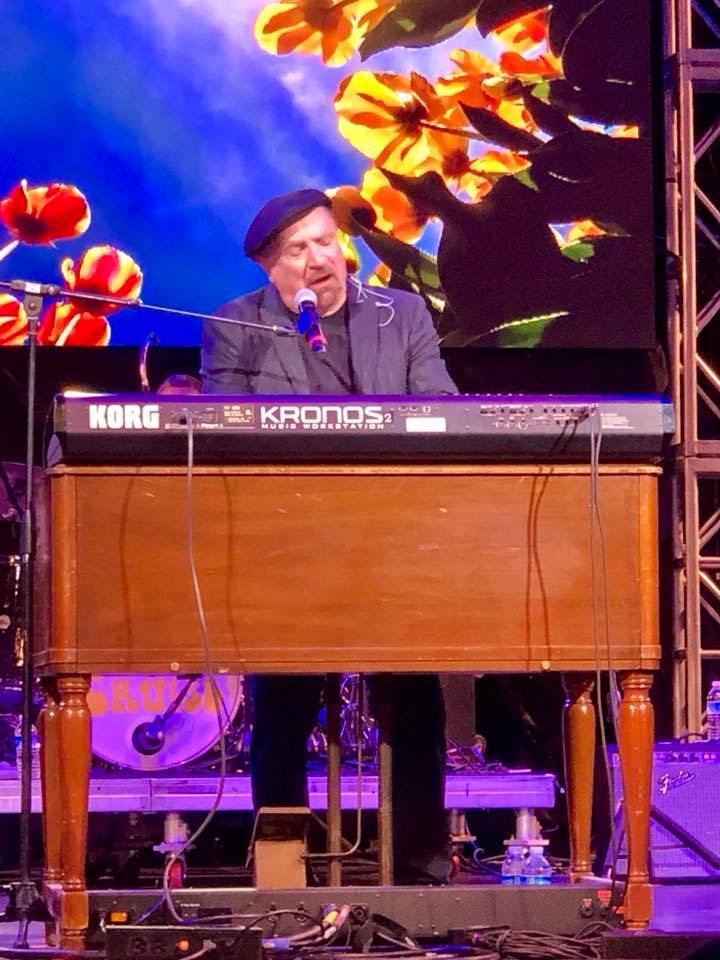 Here’s the only original left – the drummer Don Brewer and lead singer of Some Kind of Wonderful, along with a great singer from 38 Special, Max Carl who soloed their hit “Second Chance” (which he performed with Grand Funk much to my pleasure) 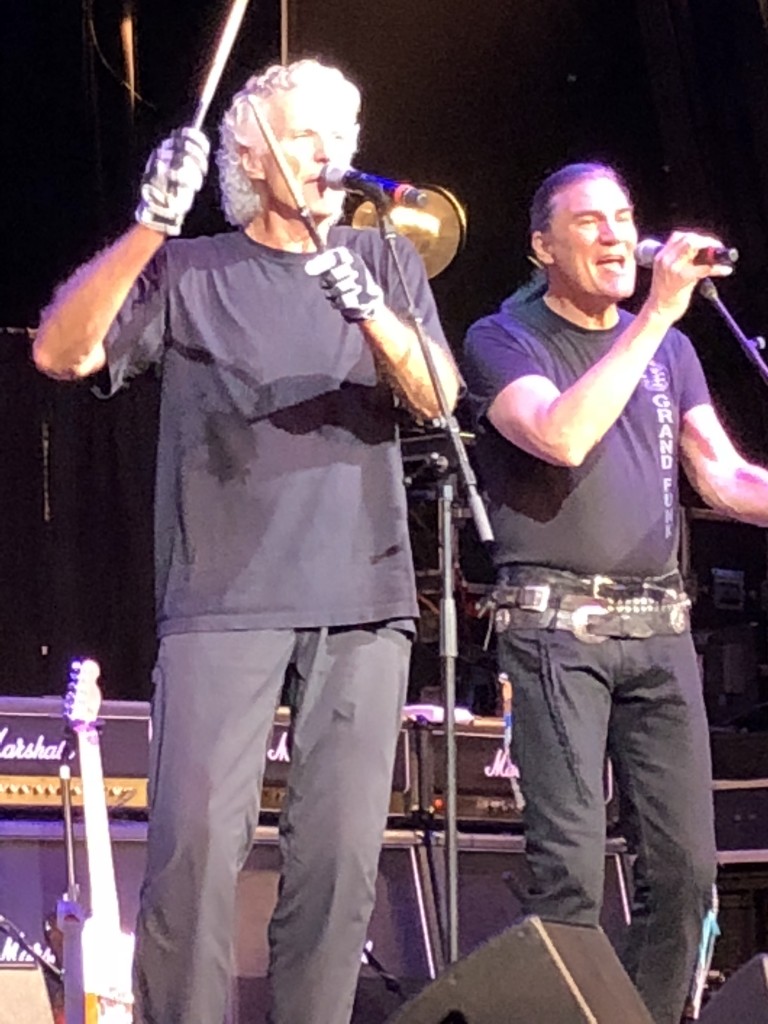 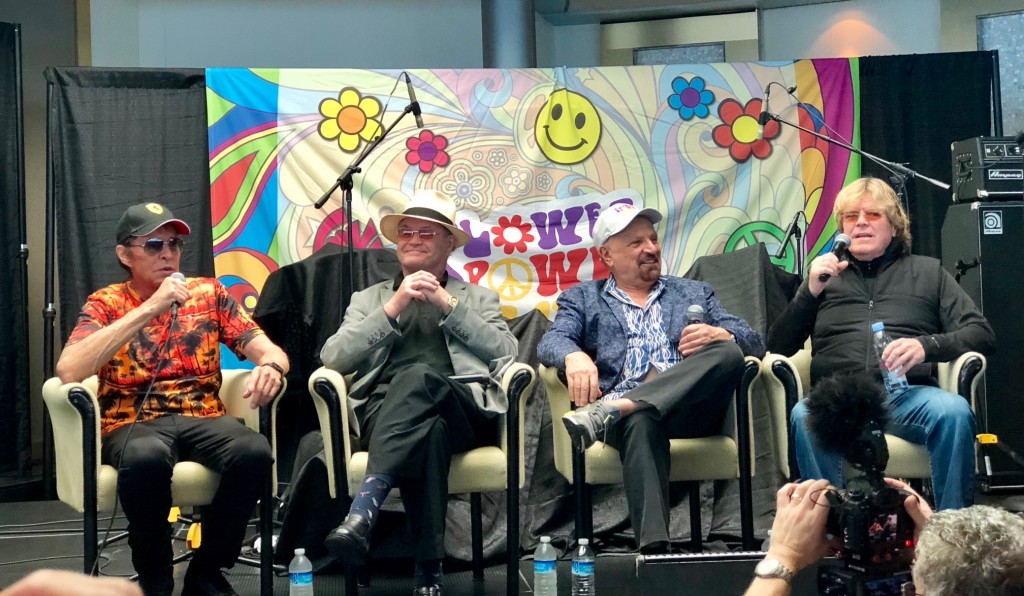 Mark Lindsay – the lead singer of Paul Revere and the Raiders, still sounding good. (16 hits and though I was never a huge fan, some of those hits are GREAT.)

The Family Stone – 11 hits (Dance to the Music, Everyday People, Hot Fun in the Summertime, Stand, Thank you Falettinme Be Mice Elf Again, Everybody is a Star, Want to take you Higher, Family Affair etc) Me pictured with a member of the group in an elevator! 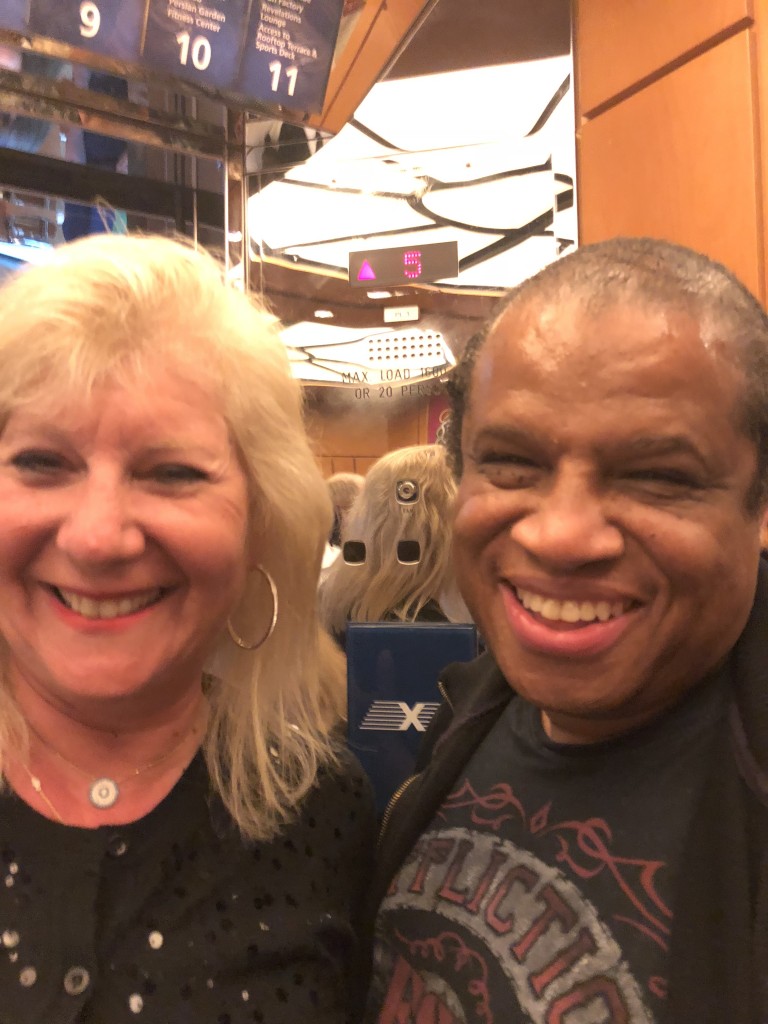 Peter Asher, host and performer (of Peter and Gordon and famous music producer) 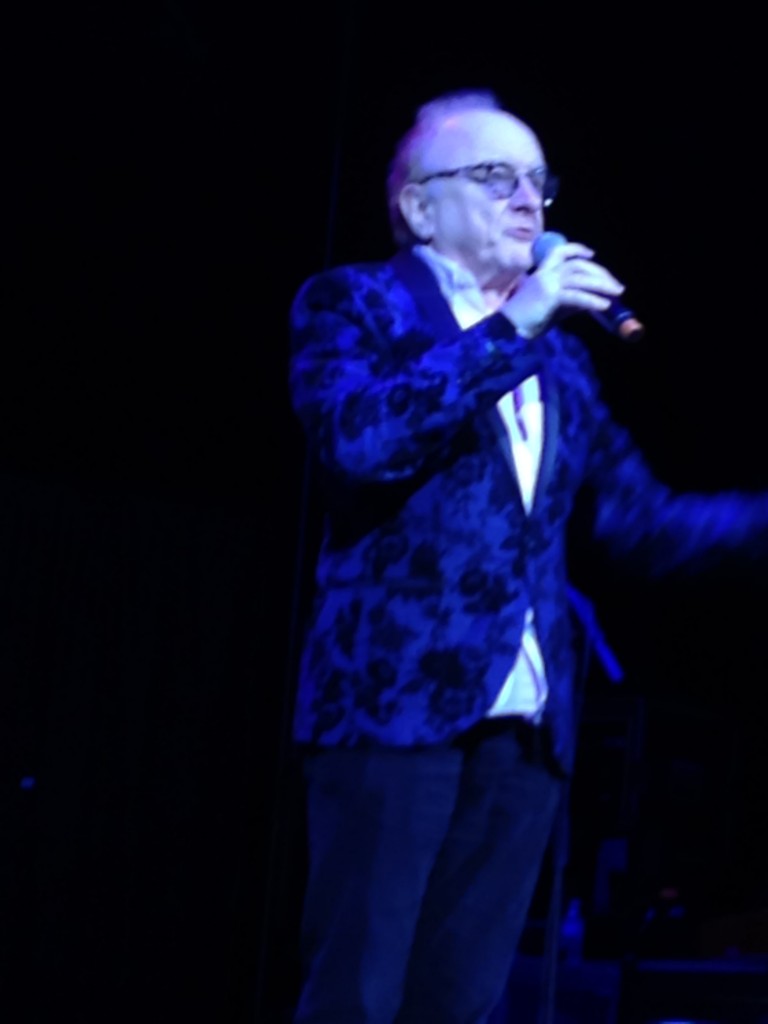 Full disclosure: I skipped Canned Heat and Iron Butterfly. Not my kind of music taste.

With the exception of Iron Butterfly, the one hit wonders of In-a-Gadda-Da-Vida – all 17 minutes of it, and Canned Heat (A Woodstock band) the above list had over 120 solid top 40 hits through the 60’s and early seventies. We were ALL singing along the entire cruise. In fact, most candid photos from the cruise are of people dancing with their mouths wide open singing along.

As I have written about many times in the past, I was born with a transistor radio attached to my ear. I was watching American Bandstand from the time I was five years old and received my first transistor radio around then so I could listen to top 40 hits on the AM stations in Philly where I was raised. Philly was a pop music town and also hosted American Bandstand before it moved out to California.

The above groups’ heydays were from 1964 to 1972 – prime time for my growing up with their songs. They brought me joy all through my childhood. And to get a chance to see so many of the bands I loved at one venue while being dined and relaxing in the warm sun sounded too good to be true.

They also had other entertainment on board, such as the Blues Brothers (funniest show) and the Unknown Comic (Murray Langston from Gong Show fame) as well as impersonator acts – who performed as the Beatles, Janis Joplin, Cher, Jimi Hendrix, and Jim Morrison and the Doors.

If you played it right (and smart and shrewd like I did), you could end up seeing every single concert offered, plus doubles of some. I spent every second of time lapping up the concerts and music, all day, and all night. (Fortunately, I still have the energy and stamina to sing and dance with abandon all day and all night for seven straight days. I was hoarse and exhausted afterward though.)

Aside from the shows, there were many opportunities for Autographs – long lines so I passed as I am not one for autographs – and mingling with the celebrities as well as going to Q & A sessions and up close interviews with them. As you can tell, I was busy from early morning trivia – our team was the undefeated champs all week – thanks Brilliant Six, to late night after the 11 pm pool party concerts. Peter Noone handed me his CD of all his hits after his show, and Linda got the drumstick of the original Guess Who drummer, Garry Peterson. I also won a red colored classic album remastered of the Association’s greatest hits: Windy, Never My Love, Cherish, and Along Comes Mary for a name that tune with Beatles Brunch radio host Joe Johnson 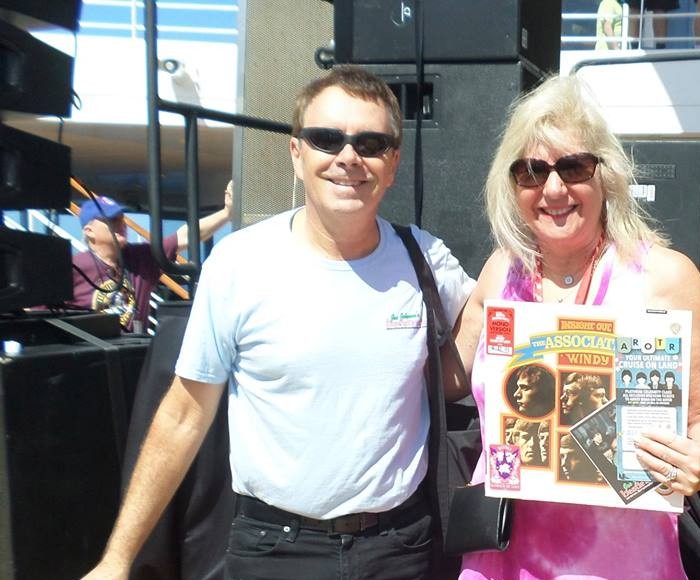 With the average age 65 but loads of us younger, it was amazing how everyone was able to keep up with the pace of events. It was sheer exhilarating fun, with the nicest, most like-minded people aboard possible.

One of the things I did which made me feel I got my money’s worth more than many others, is that I did not waste a single moment standing in line. I was shrewd in my plan and I still got front row seats without standing in line due to my unique strategy, which unfortunately cannot be shared here as I may want to go on a future one, and I want to use it again without others catching on. So many others waited in long lines for the popular concerts, some for hours. Not this girl. Nope. (My partner in crime, Linda, was great at assisting with this plan.) I called us Double Trouble.

While others sat in the lounge, or bars, and listened to no-name crooners paid to entertain those venues, I was seeing acts multiple times. While others waited in lines, I was at a venue seeing a show. I tried to count, and I think I saw 20 name-brand concerts in seven days, most up close in the first few rows. Can you imagine how much you would pay for great seats at 20 concerts? That’s why this was such a bargain. Then again, I probably saw more shows than the average person, and I am thrilled I saw the Hollies perform their two shows. They were incredible. They do not tour the US and have limited their touring as they still have a few of the originals and they do not want to go far away. As far as I was concerned, seeing them up close twice, and the Cowsills up close twice, and The Guess Who up close twice, was worth the price of admission – yet there was so much more. The Buckinghams and Family Stone (also seen twice) were surprisingly good and thrilling.

The great thing about these bands is that they play all their old hits because they know that’s why we came. Not only that, but the ones with replacement lead singers and/or other members, sound exactly like the originals. They choose the replacement members carefully to mimic the same exact sound. We not only want to hear all the old songs we loved and know all the words to, we want them to sound exactly the same – fresh. Yes, over 120 hits were played to our delight.

They also did fun things like Costume Night – pictured are Houston friends Jodi and Glenn (who wrote the Book, “We are Woodstock” which they gave out for prizes on the cruise.) There was also lots of dressing up from the Flower Power era but I did not do that, although I wore my light up boots a bunch, and they are always a crowd pleaser. 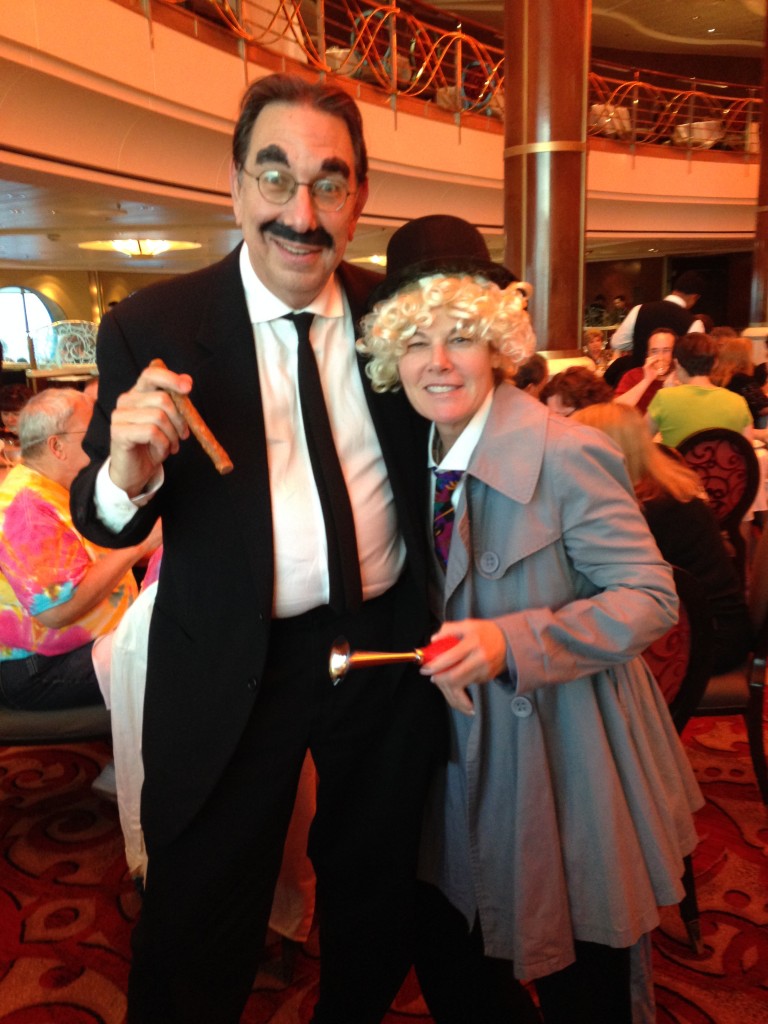 TO BE CONTINUED!!!! More about the terrific people I met later!