A Weighty Issue and Extreme Yoga

Let’s discuss middle age weight control since it seems to be a popular topic, and I have a somewhat extreme exercise routine to help me with that – more on that below. Menopause messes with bodies that have always been somewhat svelte, and body forms change.

I have a tiny tire around my middle that no amount of exercise seems to erase. I really should not be weight conscious at all, since at most, if not slender anymore, I am still average/medium. Yet society makes it seem wrong not to be a size small or size 2, and women judge themselves harshly. Men can get that middle age spread, and just buy those larger sized shirts to hide their big gut. (The only telltale sign is that the short sleeves on these oversized shirts that fit over big bellies go down past their elbow – a dead giveaway that they are doing the XXL sizes.) No one really scrutinizes or cares about the men’s spreads, but women get judged.

We just celebrated a very joyous wedding for my wonderful son and new daughter-in-love, and I picked out a princess type dress with about 20 pounds of material on it – loads of layers of material. It was also empire style, which means it is fitted at the chest and then goes out tent-like from there. 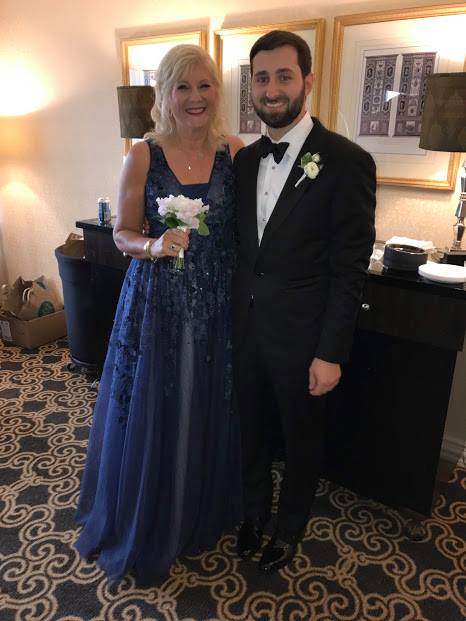 I really loved and wanted this dress, it has beautiful appliquéd flowers all over it and I wanted to feel like a princess. Yet, the photos add the 20 pounds that was caused by the abundance of material and the empire styling. I am not letting that upset me, because I had the time of my life, and I felt gorgeous. I just want to know who decided that women should always be so hard on themselves — we are always our own worst critics. This has led to a society of eating disorders, including the one I will discuss below.

For weight control, I practice Bikram Yoga, and I have to say, I look pretty good these days, stripped down to my yoga bikinis in front of all the mirrors in the room. (One must wear brief clothing as you end up as wet as if you came out of a swimming pool.) The photo below will give you an idea of how I look in my yoga shorts and bra, even though this was taken at the beach a year or two ago. I have recent photos of me in my gear, but they are so brief, too embarrassing to post here on a public place. 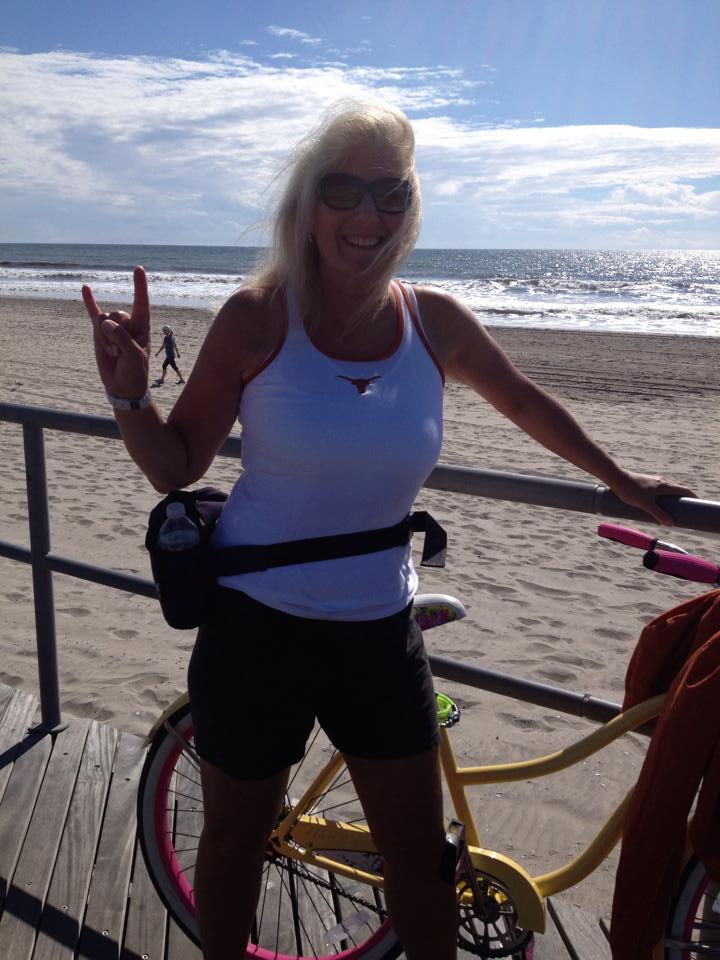 My yoga friends who don’t know me outside of yoga refuse to believe my age, and they tell me I have legs like a 20 year old, as does my hairdresser, Liz. So even with my being average weight and no longer slim, it works well for me and I still feel good in cute clothes.

NOTE: A word about Bikram Yoga – I pledge no allegiance to the founder of Bikram Yoga; if you look him up, you see he is a vile, bad guy and that is why I am not even giving him credit by mentioning his name. I only practice this form of Yoga because it somehow works well for me.  I have written about it several times before, and my Huffington Post piece, written at the beginning of my practice, was shared around the world.

With the 90 minutes of calisthenic type of poses and the sweat raining down from every pore of my body in the 105 degree heated room, I burn about a billion calories per session and sweat at least a bucket or two. (Okay, maybe a slight exaggeration.)

With my older body not being as flexible as those more youthful, I can’t do the full extension of some poses. I try to go deeper as gently (and not so gently sometimes) suggested by the instructor, but my body just screams OUCH back at me when I do such silly things. I just try to do the best I can do on any given day. Pain, pain, stay away, come again another day! I don’t do pain or even discomfort well, so I marvel at those who can.

I, who never really sweat before I did this routine, (just dainty moisture or tiny beads of perspiration) watch my sweat come down like it is rain coming off my body, and I must drink two 22 ounce waters while I do this routine to stay hydrated. (Otherwise, nausea and dizziness may occur. This is not for wimps.)

With the calories this routine burns, and the water weight lost during it, Bikram yoga places are a “hotbed” (a pun!) for attracting anorexic type women. It is probably the most taxing and challenging yoga and it is the longest at 90 minutes.

You can always tell an anorexic in class by seeing their skin and bones skinny figures in yoga shorts or tights that always hang loosely on them while fitting snug as a glove on the rest of us. When I see one, I study their behavior because I am curious on how their brains work so differently than my own. They usually look a bit jaundiced, and they refuse to drink water during the 90 minutes. (God Forbid some water weight will not be lost.) They not only hold poses for the full length of time (requiring both strength – pain endurance, and stamina, and this is something I cannot do yet) but they even LENGTHEN the amount of time they hold the pose. The better to torture themselves even more, sweat more, burn more calories. I watch them in wonder.

With my being an armchair (but educated) psychologist, I try to wrap my own brain around the idea of a brain not feeling pain, torture and deprivation- a brain wired to a single focus.  I am just starting to understand this disease as a masochistic one, due to what I watch them endure.

Say a pose is held for one minute. Imagine trying to keep your arms rigidly straight out in front of you while they burn from the hold and want to collapse – you can barely on your best days keep that hold because the pain and burn is severe, and you give up at 50 seconds, which is normal for most. The anorexic ones hold these kinds of poses for at least 10-20 seconds after the instructors release the 60 second hold of the pose.

The new girl I saw most recently was right in front of me and I stared at her bony frame reaching fully beyond what any body should be able to do. When it was over, the rest of us stumbled out completely spent, but she stayed behind to do approximately 20 more postures because I watched her for a while through a glass door after I exited. In fact, our instructor lectured us a bit during class for gaping and staring at her – I guess I wasn’t the only one – and reminded us that the only one we should be watching in the mirror is ourselves, not someone who can do beyond a full extension.

I originally wanted to do this exercise for weight control and stress relief. It is just average at doing both for me, but I keep at it anyway so I guess I am getting some benefits. I know my bones are stronger, and my balance is better than ever.

Where as I may do this routine three to four times a week, an eating/exercise disordered person will probably do it 7 days a week and may do a double or two as well. (That’s a back-to-back class. I tried that one time and almost died.) At any rate, I know it is not right to watch their behavior and try to analyze or understand something that a normal brain can’t understand. And I feel a bit of gratitude, in between a tiny flash of envy for their superhuman willpower, that I have a brain that allows me to stop when in pain, and allows me to eat.

Yet, I must say, that although Bikram Yoga is a pretty intense, calorie burning, sweat-filled exercise class to begin with, the way these eating disordered women do it makes it become extreme yoga. I don’t do well with extremes of any kind, thank you.

I guess I will always choose general good health, a normal appetite, and an average middle aged body over becoming obsessed or extreme.