As many of my readers know, I moved my 87 year old dad here from far away Philadelphia. Although he had visited Houston on many occasions, visiting and living here are two different experiences.

When he first arrived, he kept joking that he would have to get boots and a 10 gallon hat, saying it in a Texas drawl. I kept rolling my eyes because that was his attempt at “Texas” humor. After apprising his surroundings for six months, he realized that it isn’t really funny because he hasn’t seen any boots or 10 gallon hats worn on anyone yet. It’s the same assumption everyone has before they actually come here. So he’s given up talking in an exaggerated drawl and talking about needing boots and a hat.

He is amazed at how green it is here. (Dad arrived from a concrete jungle of an inner city place in Philly) He is filled with wonder that we could be living so suburban and still be in Houston-proper, and have all the conveniences and hot spots minutes away.

He is fascinated with the rain patterns. He can’t believe it can pour on the north side of town and we don’t get a droplet. We were at the bank a block away from our house one time and it poured there and not at our home.

He can’t believe how big the city is. He regularly gets confused and/or lost in his sense of direction here,  My husband, after explaining that the Galleria area is NOT downtown (10 minutes from our house and a major shopping hub and home to Dad’s favorite restaurant, Kenny & Ziggy’s deli) printed out a bunch of maps to give my dad some orientation on the direction of things. We don’t want him feeling lost and confused in the big city this is. He stopped driving so he really doesn’t pay attention. That’s why Houston is so big to him, even though most things are a 10 or 15 minute drive away.

Dad is awed by how cheap gas and the cost of living is here. He keeps comparing gas prices and prices of groceries and meals out to home, and he can’t believe how reasonable it is compared to Philadelphia.

Being a slight frame and weight, he loves the warm weather here and never complains even on the hottest of days when we have to do errands in 100 degree heat. Conversely, he thinks we are way too over-air-conditioned in stores and restaurants and I would have to agree with him there. I carry a sweater with me always!

Dad is completely awe-struck by the size of our Medical Center here, well renowned and one of the top if not the top in the country. (He has made the rounds of doctors, of course and has even had a heart procedure done.)

One of the cutest things he loves about his new hometown is the food. He is constantly saying how every restaurant we have taken him to has the best food ever. The poor man was restaurant deprived because he lived in an area of Philly where there were virtually no restaurants save for a diner or deli. Give him an evening of Chinese food and a Marx Brothers DVD and he is in HEAVEN.

Most delightful to him is the proximity of his grandchildren. Dad just LOVES to get together with his grandkids and raves about them afterward. He feels very privileged to have this now as he spent years and years far apart from them. His delight with them is touching! (Below enjoying Sunday brunch with his grandson Brett) 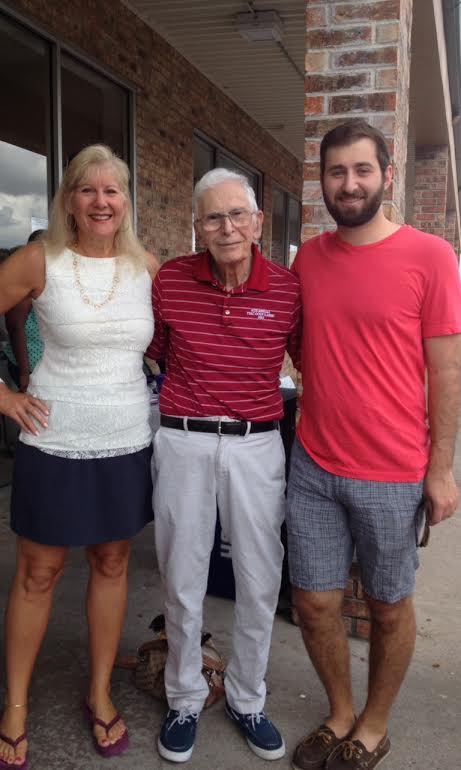 A major discovery for Dad was the spa pedicure! He previously went to a podiatrist to trim his toenails and spent a fortune. Now he gets a massage, cuticle treatment and nails cut in luxury. Father and daughter Spa Pedis!

What he talks about most, other than saying over and over and over and over that he should have made this move ten years ago or more, is how friendly the people are here. Being a social kind of guy, he will strike up a conversation and find a new friend, in stores, restaurants, at the bank, etc. He’ll shake his head after a great interaction, such as one night when he conversed the entire dinner with the couple at the next table over, and say that he cannot get over how friendly people are here.

“That would have NEVER happened in Philly,” he says all the time when he makes a new friend.

In all fairness, Dad lived in a declining part of Philadelphia and had a very small, small life. Here his life is much bigger, because EVERYTHING IS BIG IN TEXAS.

He’s got a routine and rhythm to his days that he enjoys: eating lunch meals occasionally at the JCC, going to musical programs, dutifully visiting his wife at the close by nursing home, spending time with his “Senior Companion.”

Yet he is so darn happy and watching him enjoy everything about his new adopted city, like a child full of wonder, makes me appreciate where I live all the more. Anyone who asks how Dad likes it so far in Houston gets a response, “Oh I LOVE it here! I should have moved ten years ago! This is a great town!”

And then I think with satisfaction how he came like a withered plant, dying on the vine, emaciated, and looking every bit of his 87 years. Now he has gained weight, tossed away the cane, and he is looking spry and happy. It is a happiness he hadn’t known in many years as he was struggling and I didn’t even know it. He is a flower that has bloomed in Houston, Texas.