When it Comes to Winning, There’s No Contest

I don’t enter a lot of contests. The reason is that I don’t think I am particularly lucky at winning anything. Sure I fill out my share of things you stick in a bowl, but not once have I been called as the winner.

Don’t get me wrong, I feel I am very lucky in many respects such as health and good fortune with family, as well as being given a talent like writing.

But the contest type of lucky? No way.

Still, when a local radio station a while back (this was many years ago) had a contest that involved WRITING, I was all about it. The contest was to write a clever review of a popular musical show. The winner would get to take a spouse or friend to the show, dinner, and the evening in a limo. The best part for the Ham I Am (not a Seuss book)  was that I then got to do an on-air review the next day. I could just see me being discovered on radio if I could win! (Oh my mind does think big sometimes) They didn’t exclude professional writers from entering, so I decided to take a shot.

I wrote a review of the show Grease, using the Song Titles from the show within the review. I can’t remember exactly what I wrote since it was so long ago, but I remember admiring myself for weaving the songs so cleverly in the review.

Still it was a shock when I was called by the promo manager and said that not only was I the unanimous choice of everyone who read the entries, but there was no runner up because nothing compared. This is paraphrased, but pretty much what he said to me.

I was declared the winner, and the promo manager proceeded to tell me what a wonderful evening awaited me.

Only one problem: the date was the same as when I was paid for and scheduled to be on a vacation with girlfriends.

There was no possibility of a rain date because it was tied to the particular musical coming to town. (Not Grease which I have seen numerous times) This left the promo manager in a state of shock. No one ever turned down winning before.

After attempting to make clear to the promo manager that I still wanted to win something as I felt I had legitimately won the contest, he was muttering how they were going to have to go back to the drawing board. He said he would try to figure something out.

In the meantime I went on my vacation, a bit brokenhearted. I missed my chance to be a star on local radio with a clever review. I still had a blast with the girlfriends, but was floored at the irony of finally winning a contest fair and square, just to come up empty handed.

(Didn’t I tell you I am not exactly lucky?)

Anyway, after several letters and phone calls were exchanged with the promotions manager upon my return, they finally gave in and gave me as the “original” winner a few coupons good for dinners out. I didn’t complain, yet my name wasn’t announced. No bright lights. Nada. 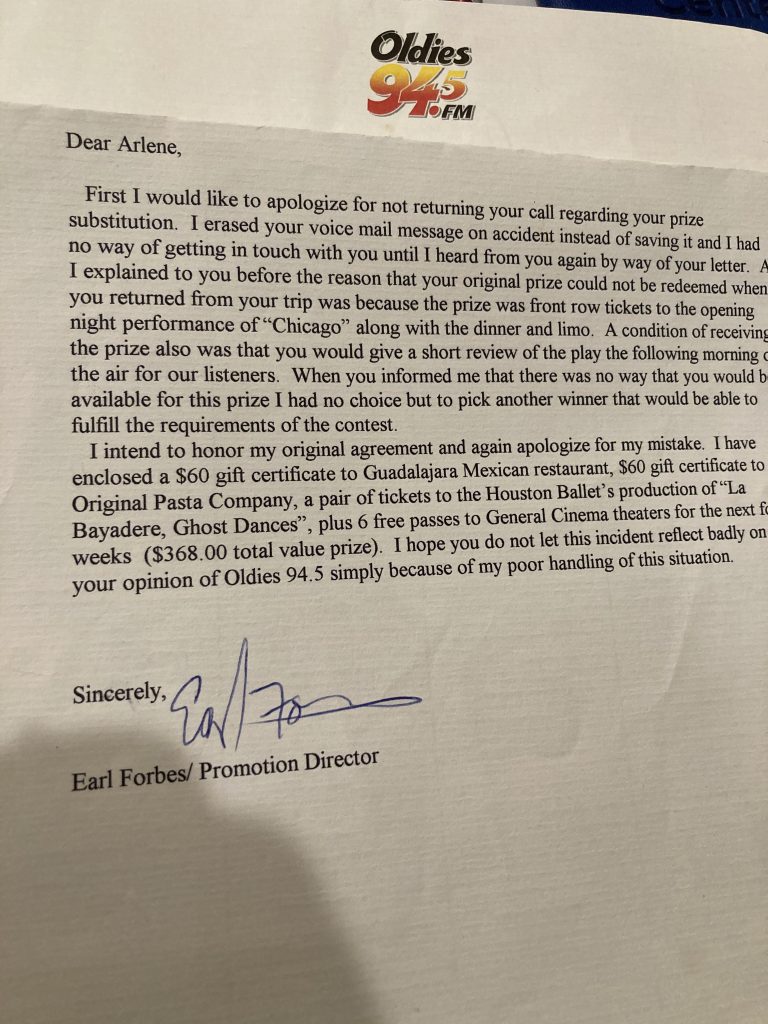 Now most contests I see that involve writing specifically exclude writers who make their living from writing. I guess that’s the fair thing to do.

As for me, I have sworn off most contests. I guess I feel I am a winner in life. And isn’t that as good as it gets?