When Our Summer Occupation was Playing Outside

I grew up in a suburban pocket of a big inner city – that was part of Philadelphia. The area was a working class section, but the residents were upwardly mobile and the neighborhoods and schools were a source of pride. We called the area the Great Northeast.

I know I am not the only one who sees the reminiscing on social media sites such as Facebook which regularly remind us that our youth was a far simpler time.

It’s now summertime. I reminisce often on what summer meant when I was growing up. Most of us who did not go to day camp or sleepaway camp (I finally went for 3 week sessions while in junior high and loved it) did not have structured activity to keep us busy when school was out.
We just hung outside no matter what the heat was, day after day. We rode bikes, went to the neighborhood playground, (my closest one was called Tarken) and at least twice a week there was a free city-run pool at another playground called Max Myers. At this free pool, which was an oasis because we were otherwise surrounded by postage stamp lawns and greenery and a whole lot of concrete with no back yards, girls would happily don our swimcaps, and swim all day long until we were absolutely waterlogged. (We could only go on Girl’s Day to swim with other girls. I believe boys had M-W-F and we had Tuesday and Thursday, but correct me if I am wrong).

Back to my other days at Tarken, there was a very basic and almost primitive set of sprinklers that we used to run around in since there was no pool. (And in the winter, there was a skating rink there – not free, but we used to go there almost daily to skate.)

It was unstructured play and fun all day every day. If our moms were home, the soaps were on and with one TV per household, there was no choice to sit in front of a TV all day. (And of course no computers or video games to sit around either.)

So we were outdoors. It was hot, humid, and muggy most days and we never cared a bit. We conjured up things to do. There was a tiny local hill near Algon or Dorcas) that was a luxury as there were no parks in walking distance.  I would pretend it was my private park and brought picnic lunches for a treat and something different to do.

The simple equipment at those ancient playgrounds were less safety conscious and probably did not have to meet stringent codes like they do today. Here is a photo of me at the primitive monkey bars, where I would climb straight up them (standing upright) and then perch on top of them. They weren’t that entertaining but we found our own entertainment on them. 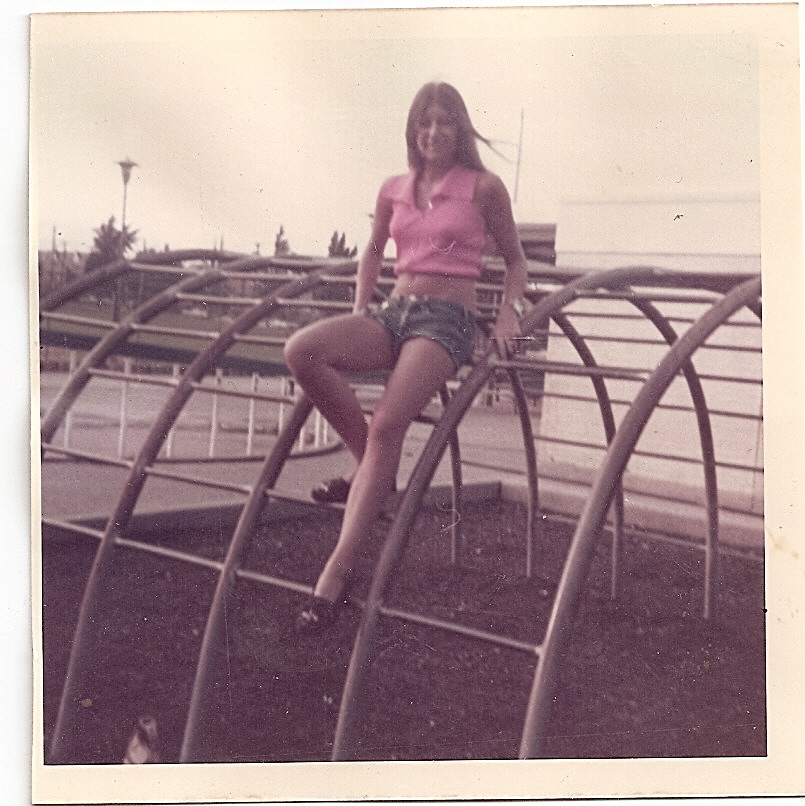 I even took advantage of the playground while a teen when others might have given up on it. In fact, we had just as much fun there as teens, knowing we were still kids at heart.

The aforementioned Max Myers playground, blocks further away, was a much fancier playground that we utilized from time to time. Aside from the free pools, it had a climbing giraffe, and a special sliding board we called the “Wiggly Waggly Sliding Board.” (It didn’t have a name marker but no one called it anything else). I am tickled as an adult that we called it this unique name. This was a sliding board that spiraled down in a circular fashion, and we loved that metal sliding board even if the hot metal burned us when it was super hot outside. We were a sturdier lot of kids who didn’t mind the burn for a little pleasure.

That’s how the summer days went by: entertaining ourselves outdoors all the long summer day with whatever means were available to us. There was no adult supervision or escorting to these places – just you g kids walking to them on our own. We didn’t come back home until dinner hour;  without watches, we kind of knew when to head home.
We didn’t bring bottled water but used public fountains when we got thirsty. If we were lucky we brought a quarter for the day with us and got a treat of a water ice (Italian ice) and soft pretzel from the trucks parked at the playgrounds, for snacks. The ice cream man was there too.

Since I was also a reading nerd, I joined the library’s book club. I was fortunate to grow up with a library right at the beginning of our street – less than a block away – and I was in the cool air conditioning there doing book club at least one of the mornings each week. I read those books every night, never missing an opportunity to read.

It’s amazing to me how structured my own childrens’ lives were in comparison to my own, and their children will have the same if not more structure.

Yet for us, it was just unstructured play, all day, every day. That’s what summer meant. Our jobs were to go out and play and have fun every day.

I would love to hear your own reminiscing here in comments below!