Why I am Slowing Down the Blogging, Pet Peeves and Kidney Stone Remedy

Lots to chat about since I have been absent for a while on the blog. The reason, of course, is the convergence of life events so enormous that my friends marvel and wonder how I get some sleep in. Lots done for the wedding planning, moving in a few weeks- this time for real, and dealing with some tragedies – so too emotionally exhausting to write. As we go through February, my blogging might be sparse, but do read the older stuff you may have missed – there are some good nuggets in there!

I will address one tragedy later, because I have to find the right words.

I also have a public service one in my head, just have to get the words down and will post that later this week.

For now, these are some things on my mind:

My husband was laid up for just a short period of time with a kidney stone. For those of you who have experienced this, you know the drill, you know the pain, and you know how debilitating it can be.

Gary is a true champion with pain, but he was beside himself for a bit. After multiple doctor visits and x-rays and the possibility of laser removal, he spoke to his good friend, Dr. Mike Greenberg, a magical healer if there ever was one. (Remind me to do an entire blog on him soon!)

He directed Gary to drink regular coke in huge quantities in a one hour period on consecutive days, and Gary did this for four days. His symptoms completely went away. I Googled this method and some claim it breaks down the stone. Gary’s stone was huge and did not seem to be going anywhere, but alas, he has been symptom-free for weeks. Thanks Greenie.

Here’s a pet peeve for those from my 60’s-70’s era. When I see a movie or show that shows students with backpacks to haul their books, I cringe. These kind of era details annoy the heck out of me and I can’t figure out why the scriptwriters, and other people working on details don’t do a bit more research on this.

I have told my kids about this era, where we actually carried our books without the help of backpacks. Of course they cannot imagine, but yes, we juggled everything in our arms, in a cross-arm hugging motion. I saw the movie “Where the Boys Are” from the early sixties, and then of course “The Graduate” from the late sixties and sure enough, every student is carrying their books! So I remember correctly.

I happened upon this photo of a friend of mine, way back in 1972, though there were photos like this in my own yearbook that is packed up in a mystery box. This is how we looked, carrying our books in the era before backpacks. Thanks to Linda M, and are you ever adorable in this! 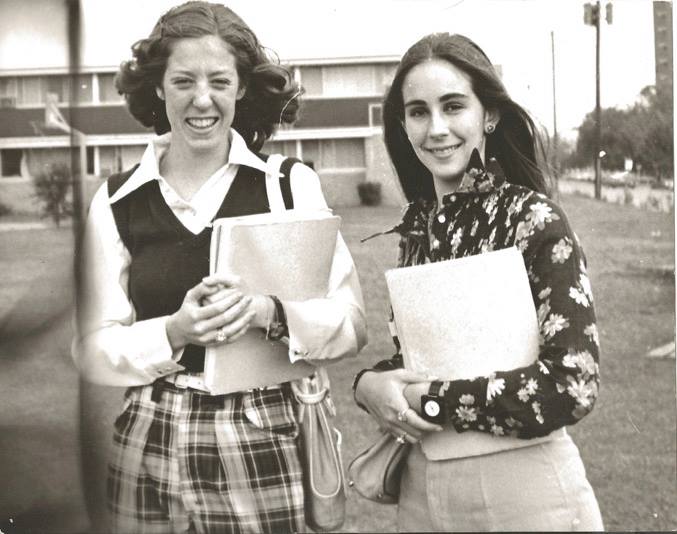 We were at a musical theater production of Hairspray, taking place in the sixties, and the lead character had a pink backpack throughout. That turned me off.

In fact, this eye for details and my insistence upon accuracy has already caused a bit of a storm when I wrote a blog previously that Mad Men got some details skewed. I heard from a researcher on the staff who debated me, but I shut him down with You Tube proof from the actual era.

I was a hyper-aware kid longing to be cool and keeping close tabs on what was “in” during the era that I grew up. I also have an elephant-like memory for even the tiniest trivia from my life going way back. So when I am watching something, these incorrect details really annoy me to no end. Small, I know, but I have to put it out there.

My next several blogs will be heavy duty so here’s a light and fluffy one to tide you over. As always I appreciate your reading and comments!