Why I Have Two Unused Pianos or Piano Lessons FAIL

I am constantly reaping the joys and benefits of my adult children thanks to some solid parenting – a bit strict and scheduled, high expectations, loving and supportive and cheering them on. I was also a mom who was able to say NO and stick to it.  (For example, no video games, Nintendo, or any of it’s kind were allowed in the house. It was quite unusual for the time – but I wasn’t nearly as strict or successful when computers came along and they were glued to those instead.)

I must admit though, that in some areas I failed. I read all the stories in the news about the Tiger Mom lady and though I absolutely did not agree with her extreme parenting style, I did find myself regretting not being a Tiger Mom in one single respect.

In other words, Piano Lessons Fail.  I didn’t push it like I pushed other things like academics, and it surprises and disappoints me in my parenting skill because everyone knows the benefit of being able to play an instrument.

I also have Piano Fail in general as I have not one but TWO unused pianos sitting neglected in my home.

It’s a long story but when the kids were little, and actually wanted to play piano, I got them lessons with a wonderful piano teacher named Miss Judy. We bought a shiny upright that fit into our smaller home. When we moved into a larger home, there was a HUGE main room that begged for a grand piano. Did I do the logical thing then and trade in the upright to get a grand piano? Of course not, my children were already used to the upright, and so I got a discounted beautiful grand that did not play well but looked the part. (I considered it more of a piece of furniture at the time and it cost not more than a piece of nice furniture as it was used and on it’s last musical legs, though it looked pretty. Here is a recent photo of me with the piano in the background.

Both of my children were seriously into their lessons at the beginning – Elissa was around 3 years old when she began and Brett was four when he began. Here’s a photo of Elissa all dressed up at one of her first piano recitals. 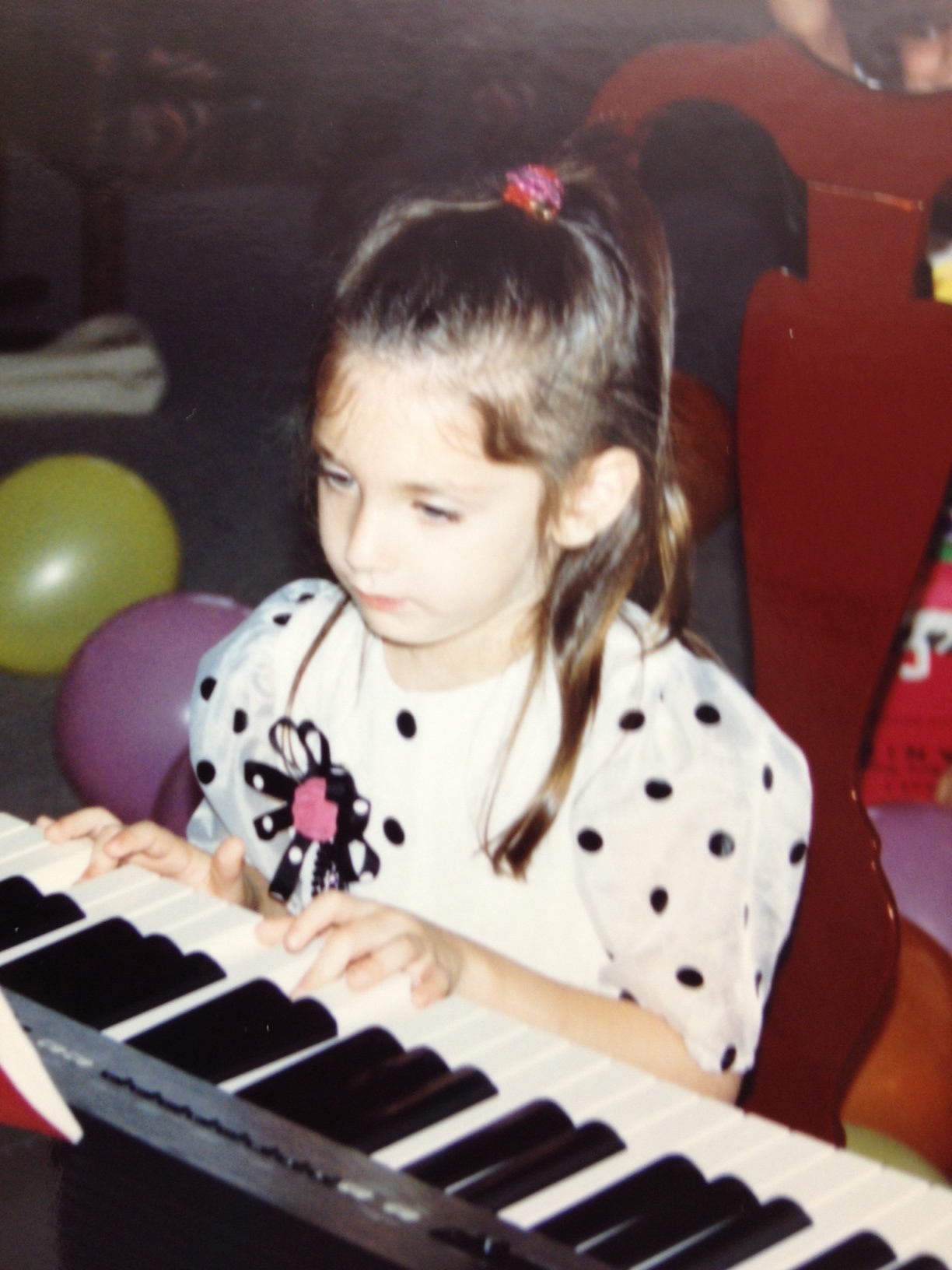 But as they grew, it made them restless. They did not want to practice, and I did not want to nag them. (There were too many other priority items to nag about – you moms out there know what I am talking about.) In this respect, You cannot progress without practice – we found that out after a few years of stagnation in piano playing.

So one day, I let my children call the shots with piano lessons. They were quitting piano and there was no turning back. I was tired of pressing the issue and fighting them. They wore me down. They were preteens at the time and busy in school with lots of other extra-curriculars and sports and on the Bar Mitzvah lessons and party circuit and I was guilted into their lack of time to have any leisure. (Overscheduling, anyone?)

Parenting so often means finding a balance between all of your own goals, hopes, and dreams, and making your children happy. And so I compromised my goal of having musicians in the family.

It’s kind of sad that even though both took lessons for about 8 years – as adults, they have very little ability left. Money and nagging down the drain. It gives me all the more incentive to take lessons myself, one day when I actually have some leisure time.