Why My iTunes Shuffle Resembles a Stack of Old 45’s

Why does my iTunes Shuffle resemble a stack of my old 45’s?  I have spoken about my love of music many times, and here is possibly the answer why my brain responds the way it does to music. Still, I wasn’t exactly a rock and roll chick. I was instead, a pop princess.

When I was a mere five years old and Paul Anka appeared on American Bandstand crooning Puppy Love – something hit my little baby self like a bolt from the blue. Here were girls swooning over this star, and he was crooning a little pop ditty back to them. That song! that singer! I later had an argument – which I remember vividly to this day- with my dad who was listening to Sinatra, that Paul Anka was better than Sinatra. (For the record he laughed at my five year old self.)

My lifelong business of loving Top 40 hits, AM radio tunes, had me tethered to a transistor radio from a very young age. Plus, I couldn’t get enough of pop hits on television shows like American Bandstand, and Ed Sullivan where pop hitmakers were featured. Later I watched shows like Hullabaloo and Shindig to see my pop stars perform.

My birthday gifts were usually Beatles or Monkees albums (yes, I appreciated ALL of the songs on these albums)  and when I was 10 years old, I began babysitting for 50 cents an hour. It took two hours of babysitting, but my money went straight to the purchase of a 45 record (99 cents in those days) that I was too impatient to wait to hear on the radio. (For those of the younger generation reading this, there was no music on demand, You Tube or anything of the sort. You waited to hear your song on the radio or you bought a 45 RPM disc record to hear it when you wanted to.)

Pretty soon, I had quite the stack of 45’s which I still have in boxes today. (Those who read me regularly know that I hoard all my old memorabilia and it never gets thrown out.) 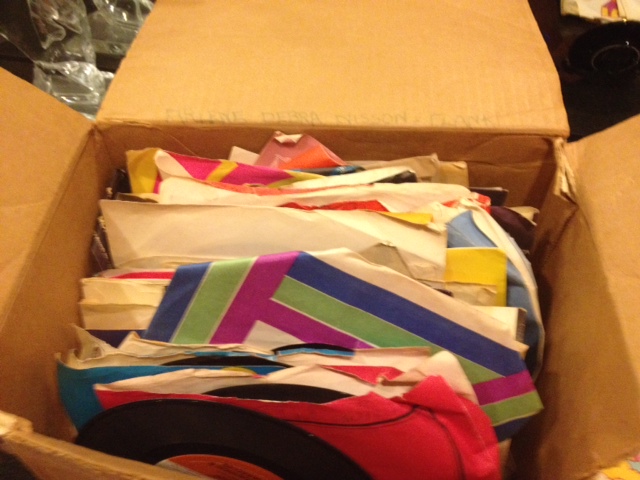 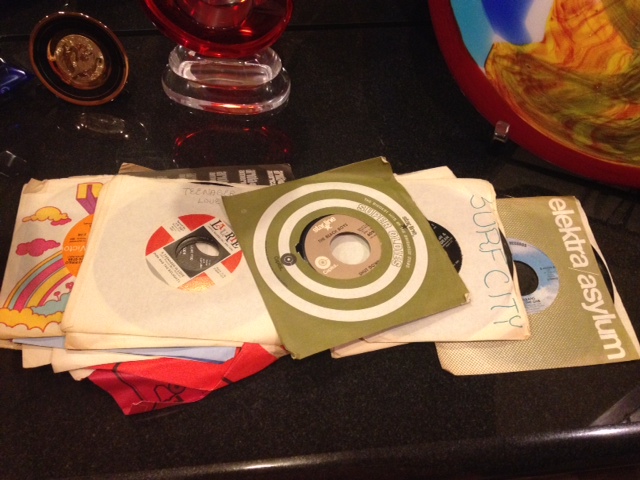 If you had a record player that had a fat spindle that you could stack a bunch of 45 records on, you could actually play a shuffle of your favorite tunes, something that is so easy and taken for granted in this day and age. In fact at “boy/girl parties” (yes, that’s what they called them when I was in junior high school) kids invited brought their favorite 45’s which were then stacked deep  so we could dance to them.  It looked like this: 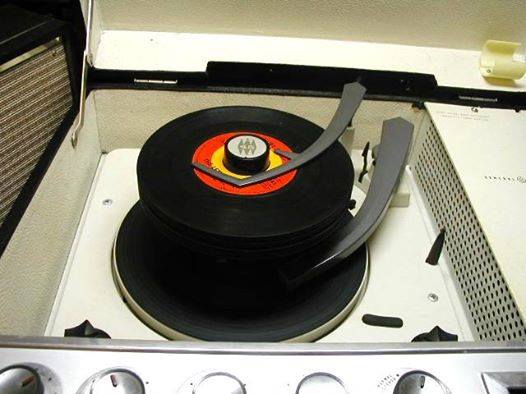 With my eclectic pop taste buds. I would go from Windy by the Association, to These Boots are Made for Walking by Nancy Sinatra, to Sweet Pea by Tommy Roe and just be in music heaven. Lots of Motown hits figured in of course, but the bubblegum tunes (think Sugar, Sugar) were always my favorites.

Even in the 70’s when music became a little ridiculous, I bought tunes like Le Freak, which was basically only listen-able if you were in a disco in 70’s clothing dancing away. What WAS I thinking?

Not that I had a voluminous collection like the hundreds of iTunes I have today. I would have had to constantly babysit to get all the records I wanted, so lots I did without and waited, waited, waited for them to come on the radio.

We so take for granted now how easily accessible music and individual tunes are these days.

And fortunately later on I had some very nice boyfriends who introduced me to Rock and Roll and album rock (thus refining my taste quite a bit ) and gifted me with some great albums, where I discovered that with groups and singers like Creedence Clearwater Revival, Emitt Rhodes, Carole King, the Moody Blues, Bruce Springsteen, and Led Zepplin – I could appreciate an entire album of music and not just a single here and there.

But here’s the thing. I have remained a pop princess. I love to play a shuffle of 80’s pop tunes – a great era for pure pop music. I continued buying pop tunes in the 90’s and beyond. Actually, I never stopped. Now I just download an iTunes single by Bruno Mars or Taylor Swift or whoever else I like a pop hit by, and it’s in a very eclectic shuffle with music from the 60’s on.

I am so disgusted at the exclusion of many of my pop dream teams from the Rock and Rock Hall of Fame (I have nothing nice to say about Jann Wenner and read the blog I did on this) that I even told my husband that I wanted to start a Pop Hall of Fame, but then we found out there already is one. In fact, 2014 was the largest vote ever for my beloved Monkees, a subject of many of my blogs. It seems like a new organization and I should be part of it with my history, that’s for sure.

So now, let’s travel memory lane together. What was the first single you bought? What was your favorite that you absolutely wore out. My first – with babysitting money at the age of 10 in 1966 – was “These Boots Are Made for Walking” by Nancy Sinatra (by the way, the video I linked is hilarious on so many levels – the clothes! The dancing!)

I had already collected some older ones from a cousin and a neighbor so I already had my own collection by then at age 10. I had my record player and my transistor radio. I was in heaven! I could have only DREAMED of music on demand or You Tube at that point since I never had enough money to buy all the singles I wanted.

So Boots was my first purchase. The one I wore out was “To Sir With Love.” Now, your turn.

ADDENDUM: Oh my what fun with this post. Below are some of the photos sent to me. Seems I am not the only one who kept their prized 45 collection! Thanks Sherry and Judi! 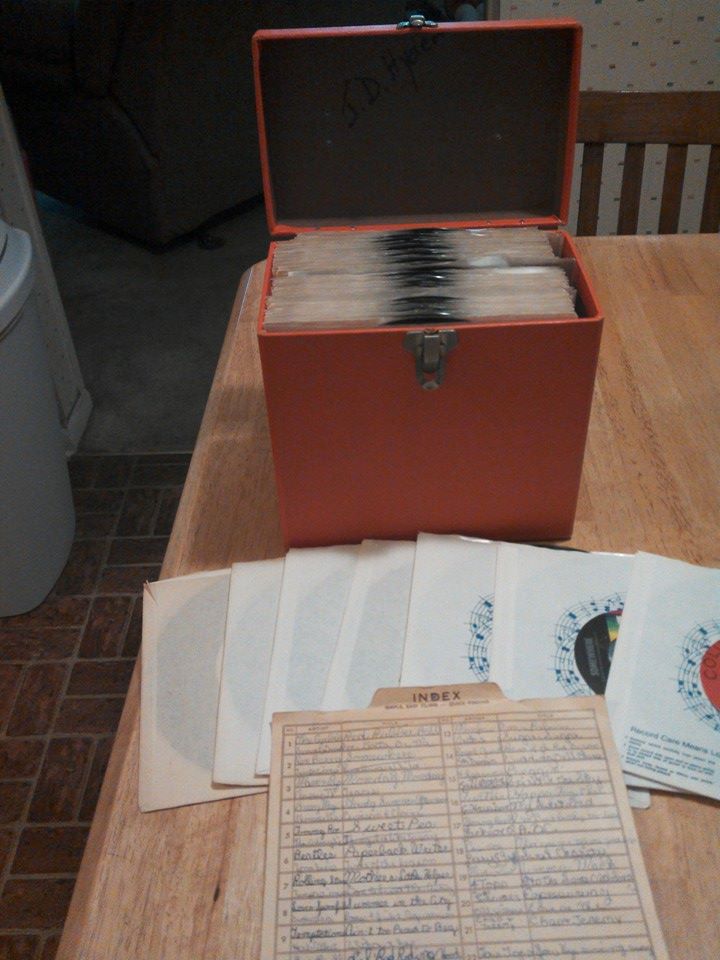 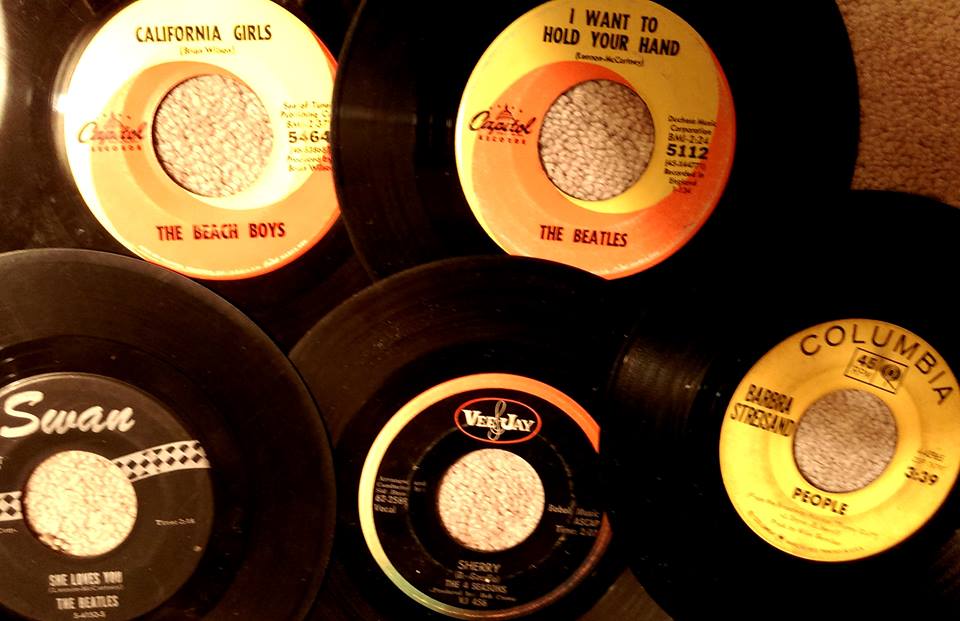