An Amazing Reuniting of Two Phillies Girls in Houston

Sometimes that phrase, “It’s a small world” comes to have new meaning in the event of a coincidence such as the one I recently experienced. How is it possible that a girl I worked with over 37 years ago with the Phillies was living right in my same city the entire time?

First, here’s how all of this came about: thanks to Hurricane Harvey and my flooded garage, where I had big plastic storage bins filled with photo albums, I lost just about every old photo I owned.

I was fortunate to rescue and dry out a few, and I scanned the rest before tossing them. I was also fortunate in that the most important photos are digital as I have been trying to accomplish digitizing them for the last several years.

Still the very oldest albums of my time in college and as a young adult before Houston, and my first arriving in Houston mostly all drowned in flood waters. I scanned quite a few photos until I was delirious from that task, and so I still have wavy, watery photos of those times of my life captured in just a few highlight photos. 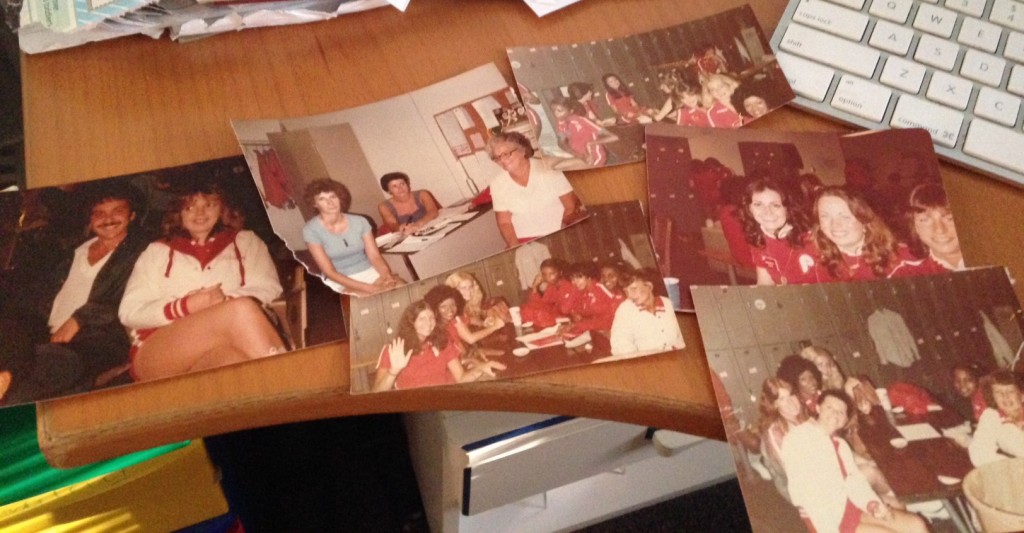 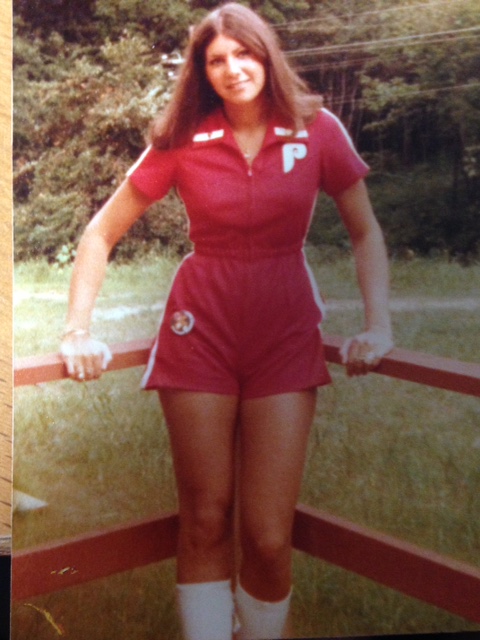 I came across one photo of a lovely girl named Lisa, who I befriended in my last two seasons there. She was younger, and I was like her big sister. I remember trying to fix her up and listening to her boyfriend problems. 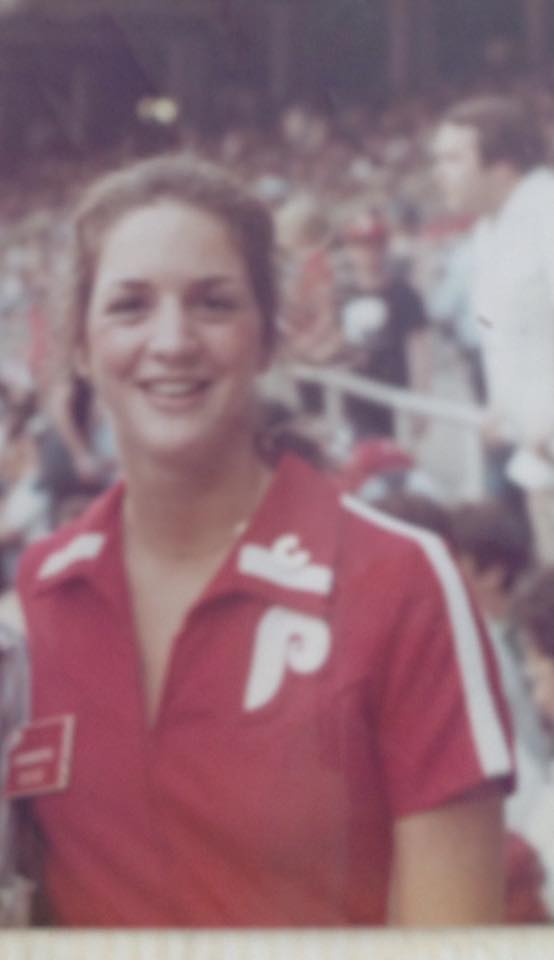 What I liked most about Lisa was her down-to-earth demeanor, and her natural beauty – she never wore a lot of makeup and mostly wore her hair back in a ponytail, but there was no denying she was a very pretty blue-eyed brunette. There were plenty of girls chasing ball players, tons of plastic princesses with too much makeup, and some of us were just hardworking girls who liked the sport of baseball. I befriended just about everyone who fell into the latter category. Lisa was also bright, and it was always a pleasure to connect with her at the games.

I tried fixing her up, as I did for several others, but Lisa kept going back to her old boyfriend.

At any rate, until I came across her photo with someone I tried to match her with, I hadn’t thought about her, or any of my Phillies Girl cohorts, for a long time. As I looked at my photos, all the names came back to me, but mostly just first names. I have an unbelievably accurate savant-type long-term memory, but I could not recall more than two with first and last names. Lisa was one of the two, and I remembered her Italian surname vividly.

After seeing her photo again after all these years and knowing her maiden name, I looked her up on Facebook. BINGO! There she was with her first and maiden names, and her married name. I recognized her face instantly even though we hadn’t seen each other in 37 years.

Here’s where it gets weird. Lisa lives right here in the Houston area, and based on my Facebook stalking of her page, she had lived here for a long time.

So I messaged her and sent photos and we connected and made plans instantly to get together to talk about the old days.

As Phillies Girls, (or The Hot Pants Patrol – our official moniker- and see who is on the Wiki page here) most of us were in college or graduate school, and the income the job provided was better than any other summer job we could have had. Although the day to day wasn’t very glamorous, it was a prestige job, filled with good-looking young women wearing hot pants and white patent leather boots. (More on those later.)

For those lucky Phillies Girls like me, some of the assignments were just wonderful and fun. It took the drudgery out of the long games, rain delays, and drunken fans with SO MANY HOME GAMES in a baseball season.

We felt special. We were hand-selected for the role, and with our cute little uniforms (except the boots) we were a unique sorority of women. There were always fans who wanted our autograph, or phone number, or wanted to be photographed with us. Only we would know how many random old photos are out there in the universe of us with strange guys that we never saw again. (TONS) Here’s a Polaroid a guy took of three of us and then took one more so he could give one to us. 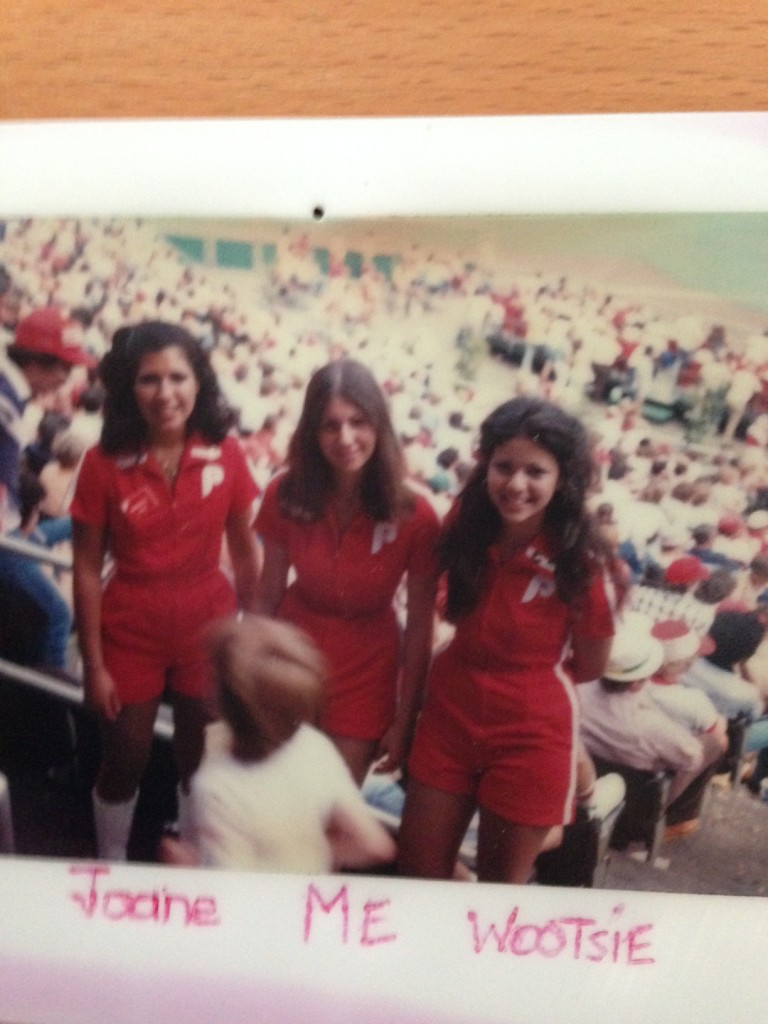 Only we would know how torturous those boots were, getting soggy during rainy games, and sticking to our legs in the 90-degree temperatures of the summer -making our legs a sticky mess. (There was no roof retractible or otherwise in our stadium then, so yes, we stayed through the rain and all temperatures.)

Only we would know the feeling of having a player ask for your number from the dugout. (They made a scribbling motion with their hands while they faced us. Some girls responded and sent down their telephone numbers on little pieces of paper.)

Only we would know what it is like to experience two and three-hour rain delays getting very soggy and sometimes chilly. (We wore our very frizzy hair with pride those games!)

Only we would know what it was like to be teased or imitated by the very talented mascot – The Phillie Phanatic (Dave Raymond) A favorite shtick of his would be to follow us when we were serving our trays and sashay to imitate our walking, making everyone laugh at us, or sticking his tongue out in our faces. (Photo of me experiencing this hit the Philly newspaper)

Only we would know what it feels like to think you are working five hours, only to have umpteen extra innings and work 8 or 9 or even 10 hours. (We were paid by the game, not by the hour.)

Only we would know the feeling of being part of a team and an organization that won the World Series. (in 1980) It was a glorious feeling being part of it all.

So getting the chance to reminisce with someone who experienced that with me after all these years was a real treat. We Phillies Girls all bonded over our great experience.

Getting back to reuniting with Lisa in present day, it was such a wonderful time. Just as we had a lot in common way back in the old days, we still felt the same connection and have led parallel lives, settling in Houston within two years of each other – Lisa had been here since 1983, and I have been here since 1981. We are both still baseball fans, and we have both become Astros fans, though we retain our Phllies allegiance too. We both have two children, a boy and a girl, and we both have watched our children become successful.

Most freaky is that Lisa has a place in the New Jersey beach area that I also own a place and go back to each summer for a visit. (She owns a house with other family members in Ocean City, just a short drive from Margate where my condo is located.)

We both still love our Philly food, and in fact, our next get together we are going for Italian food with thick red sauce (Philly style) and then for dessert, some soft serve ice cream – a weakness for both of us since it is harder to come by in Houston. (My daughter just found a place that not only serves soft serve ice cream, but puts a halo of cotton candy around it, and a toasted marshmallow on top!!!)

I made Lisa laugh when I brought our old hot pants uniform that I saved all these years and we took this photo together with it. She enjoyed seeing all of my rescued photos and remembered a lot of the girls in them. 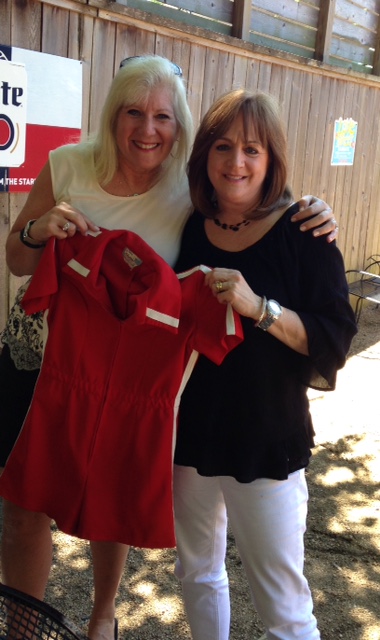 Aside from reminiscing, we did lots of catching up, and we are both looking forward to getting together many times in the future. We both were just sorry that it took so long to get us back together when we were in the same city all along. (Thank you FACEBOOK!)

I can’t wait to get together with her again!