The Marvel of the Small World Story

If you are a regular blog reader, I have written on numerous occasions about my “happy place” Margate City, New Jersey.  (Read this linked here)

I go there each summer for a stretch of time where we have a cozy condo on the beach. It is the favored place of the people I grew up with in Philadelphia, Pennsylvania, and is about an hour away from the Phila. airport. When I go to relax there, I get to see and spend time with so many former neighbors, classmates, and old friends as a bonus.

Due to having an incredible number of contacts there already in the sleepy little beach/bedroom town of Margate, population 6000, (which has no hotels or motels but plenty of great restaurants,) I generally get together with family and friends that I already know from the past.

I live in Houston, Texas, which is approximately 1600 miles from Margate. It is not the closest beach available by a long shot. I go there because it was always my favored beach place since I was a young child.

The reactions I get when I am introduced to new people about my coming to Margate from Texas each summer are mostly of the incredulous variety. “Why do you come all this way for the beach?” many people have asked. They really need to read my blogs as the answer is too long and complicated.

Regular comments like that make it appear that I am the only Texan there, along with my husband when he joins me. My children, native Texans, love Margate like I do, and they also visit on occasion. I randomly see University of Texas hats or shirts or a “Hook Em” sign when I wear mine while walking or biking, but the school shirts most prominent are for Penn State, U Penn, and Temple, along with a bunch of east coast schools.

I recently found out that Houstonian millionaire Tillman Fertita frequents his casino in Atlantic City, two towns over from where I reside in the summer, and I think he may be bringing more Texas people to the area. But I have yet to bump into anyone from Texas until this year. (One exception is our friend Joy from Philly who now lives in San Antonio and also spends time in Margate each summer. Almost forgot about her.)

This just past July, my husband Gary and I were standing in line at the ice cream place that is the most popular in little Margate – it is called the Margate Dairy Bar, and the lines on holiday weekends can be fifteen to twenty people deep or more. It is a hot spot in our little town. It was July 4th weekend and the lines were so annoyingly long, we both asked each other aloud if it was worth waiting for the ice cream. My husband said he came too far to turn back. (It was his first of the summer.)

From in front of us, an adorable couple turned around and said they came from far away too and that’s why they were going to wait. With confidence, I bet them we came from farther away and I told them we were from Houston. The couple squealed and said, “So are we!” Surprised looks from all four of us followed.

A short conversation later, we found out that Matt and Beth were from a suburb just a few blocks north of ours in Houston. They lived less than two miles away from us. How on earth did happen? What are the chances that we would be in a line 15 people deep and right in front of us would be unknown neighbors from Houston?

I had to hear their story so Beth shared that she grew up in Margate, and moved to Houston as an adult. She comes back every July 4th week to see her mom, who still lives in the area, bring her kids to the beach, and has reunions with her old classmates.

We explained our story as well, and we spent an hour eating ice cream and conversing with our new friends who we had so much in common with. 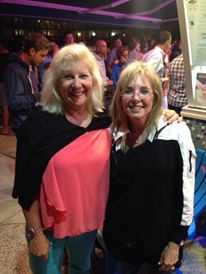 (Note that huge crowd behind us waiting for ice cream!)

The next evening Beth invited us to a party given by one of her classmates and he now lives in Dallas, but has a summer home in Margate. Now I know why I see an occasional Texas Longhorn shirt or cap! Beth and Matt played the name game and found out we have a lot of acquaintances in common and I was already Facebook friends with Matt – even though I had never met him before – because he was a former newscaster, and since I am a writer, I have a lot of Houston media Facebook friends and contacts.

Margate is a really small world, in and of itself. The area in Houston we live in seems like a little town or village too, as most of us know one another in some peripheral fashion. When the two small worlds are merged, it is sort of miraculous so I had to share this on my blog.

Would love to hear your small world story. Write to me or leave it in the comments!