A Real Life Toy Story Sequel and a Neurotic Dog

My wonderful daughter and son-in-law have moved back to Houston and were staying with us for a little bit until their new place was ready. That was a package deal that included Hank, my neurotic grandpup.

Hank, your average mixed breed mutt, is a lithe, wiry, hyperactive, and athletic dog. So aptly named Hank, I truly believe he is the reincarnation of Hank Aaron, the baseball hall of famer, who was the home run king before the age of steroid use. Give this dog a ball and he would play catch for 10 to 12 hours a day. He bounces it using his mouth, and does a happy dance when he has a ball in his mouth. He catches long fly balls from the air into his mouth like nobody’s business, and bothers us all day to play with him.

He was a rescue dog, so he also has a variety of neuroses, so it is a good thing his mommy, my daughter Elissa, is a mental health therapist. He has an anguished cry that would make passersby think we are torturing him, and he uses it freely when he wants attention.

He is also obsessed. Say you just finished a round of catch with him lasting 30 minutes and your arm is tired. You hide his ball. You shake your head no, and tell him, “No more ball, Hank.”

Hank will not take no for an answer and if you hide his ball, he will find an alternative and keep dropping the dog-saliva-ed thing at your feet to toss for him to catch. I am not exaggerating when I say this dog never rests, naps, or chills.

During his stay with us, we had a little storm called Hurricane Harvey. The wind did not touch our city, but the 50 inches of water decimated many areas of Houston.

Before the storm, my husband and I worked on organizing our garage, in case there would be water coming in from the crazy amounts of rainfall. Our house is a full story higher than the garage, so we knew at street level it might be susceptible.

He found a plastic trunk filled with old McDonald’s Happy Meal toys, which my son obsessively collected as a young child, and which we indulged way too much. (see linked blog here for that story.) My husband thought they were too dirty to give to a charity or hospital so he decided to toss the many loose ones in our large upright recycle bin. It was tough for me to give it up and see those cute little plastic figurines going to their recycling center death. Still, after a bit of an argument, I gave in. (I put a bunch aside for some teachers to use as prizes.)

So there the 15 pounds of plastic toys stayed in the recycling bin, until the storm came and the water on our street started rising. Water is strong and powerful and it overturned both our recycle bin, heavy with toys, and our trash bin.

And that, my friends, is how those precious toys plotted their escape from extinction, much like the movie Toy Story 3. Those toys floated everywhere in the yucky flood waters, all over our yard, and out our iron gate and way down our street. 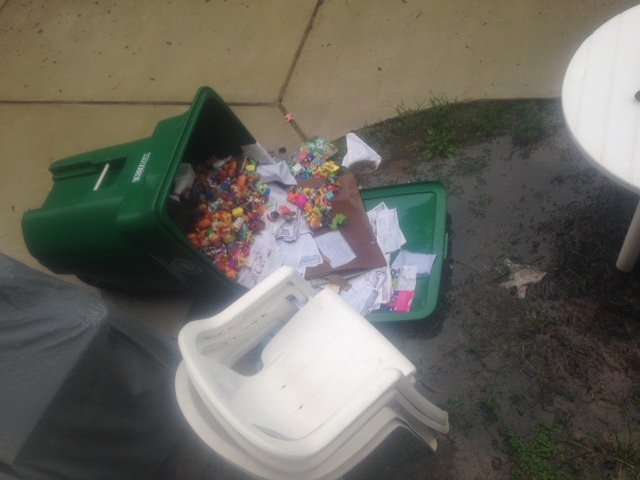 (This is how they made their escape before the water receded back down. The ones that didn’t float away were left like this.)

When the flood waters receded, approximately 30 hours later, the escaped toys lay everywhere in our yard, as well as in neighbors front yards and even blocks away. (Those of course escaped for good, and I hope some youngsters found them and were amused and picked them up. If their moms washed them with bleach and pine sol, they are okay to touch and play with, as long as they avoid their mouth. This, to me would be a happy ending.

Anyway, getting back to Hank. My husband and I picked up all the escaped toys in our yard during our cleanup after the water left. We got all the ones we could see at the time. Hank though, kept discovering more, and adopting them to play catch with when we would not give him his ball. Hank would go deep in our shrubs and bushes and pull one out to play with. He’s done this for over a week and keeps discovering more and more. After he plays catch with them a few times, we take them away, but he always finds another. He will sniff, and dig, and uncover more each day. Hank will whine if you leave it in his view but out of his reach. He likes the toys as much as my son once did. 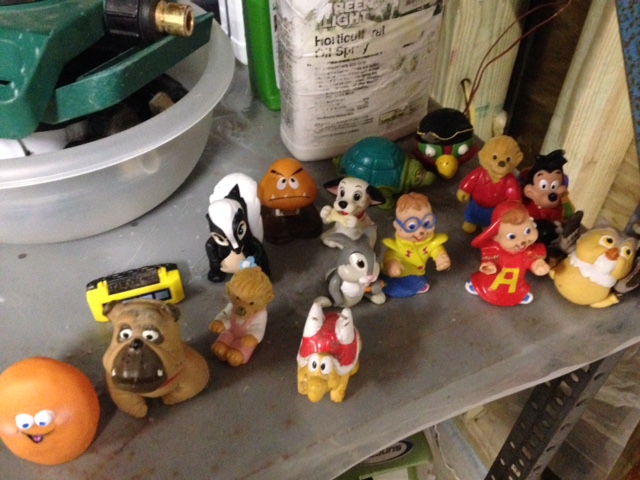 Don’t tell my husband, but I am secretly glad Hank is enjoying them, as well as a few schoolteacher’s students, as well as random people finding these happy little toys in the streets and yards of our neighborhood. It’s a fitting Pixar, Disney type ending for these toys that gave my son great happiness once upon a time.