Ahem, and now for a walk down memory lane – something you know that I love to do. I want you to know that this was a BEAR of a job getting all these photos uploaded, so PLEASE look at all the photos and read descriptions and my guess as to why they were contained in my little time capsule of my childhood jewelry box. In fact, I am sure I had a good reason for keeping all of these things, but some of the items seem like they were destined to be found just to represent the time and era — as if I knew I was making a time capsule.

Note: Sorry for the blurriness of some photos. I used my phone camera and I am about to get a new phone as the camera is not focusing well these days.

My crazy reason for looking through boxes of memorabilia was because I got a bit obsessive about wanting to prove that I still had a pin that I wore on my hip from the photo a stranger just sent me of myself from 1979. Read this blog linked here if you want to hear about the story of a random guy finding me on the Internet and sending me a photo of myself – first photo below. It started me on a mission to find things pictured in the photo.

All of my memorabilia boxes are in the attic and I never know what I am going to find when I start diving in.  Some boxes are known entities as I have re-visited them often such as the one with high school memorabilia, love letters and diaries, and the one for college memorabilia and my first trips on airplanes etc. Yet I could not locate where my Phillies memorabilia was – I worked for them through college and grad school. (Read here if you want to hear all about my glory days with the World Series winning Phillies – a whole blog on it.) I even told my husband that I was determined to find those little Phillies things and sure enough, they turned up once I found their mysterious safe hiding place.

Anyway I found the pin in the photo: 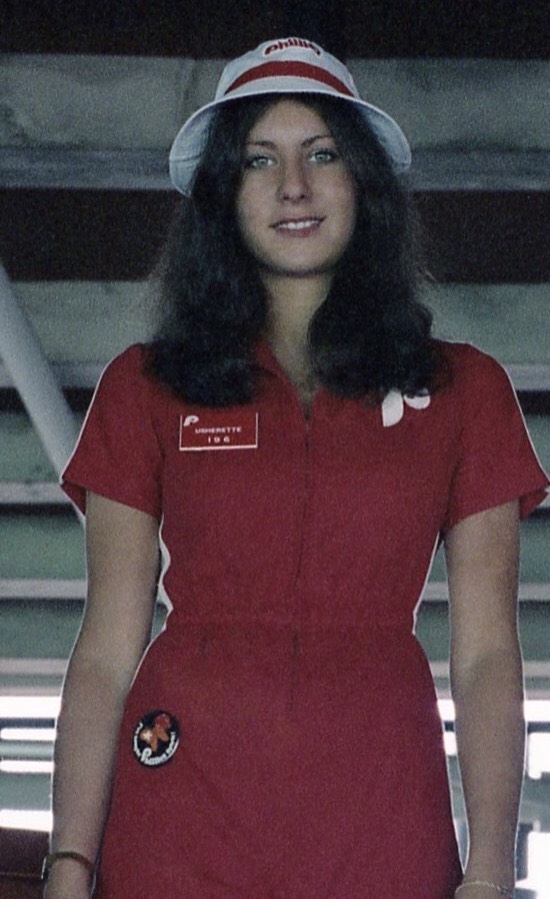 And the actual pin you see on my hip as it was in the jewelry box alongside other things: 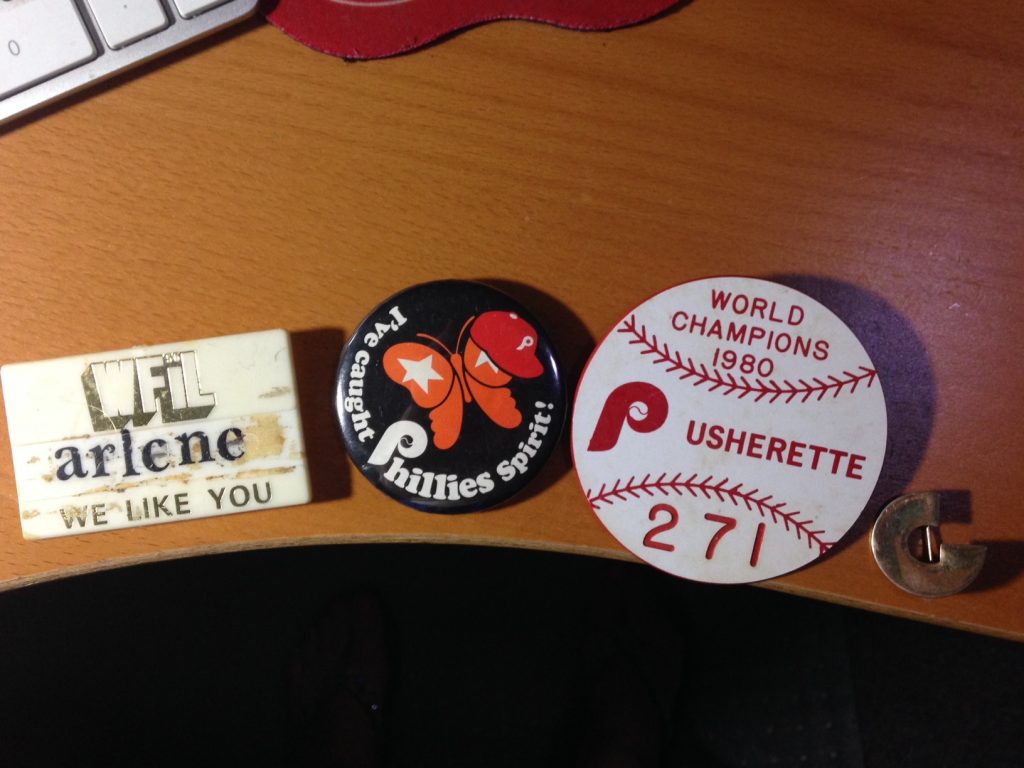 Please note that my WFIL Boss Chick (a short lived job just post high school) badge was in there too. You can also see the G pin for Girard Bank (long defunct) where I did a LOT of promotions for the Phillies team. I wore that on my uniform as well.

And now on the the other things – please stay with me here. Here is the jewelry box below 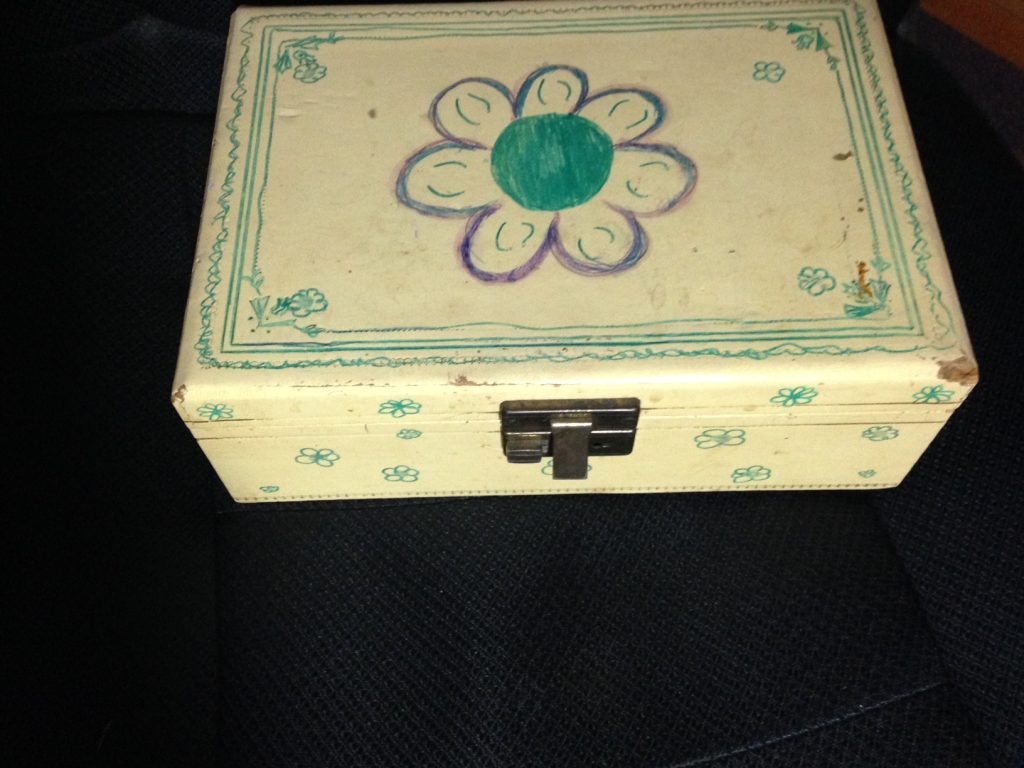 Believe it or not, the key to it was in there as well. (a bit rusted.)

First up are the oldest pieces of jewelry I own, pieces that my Paternal grandmother Gram handed down to me, and she had them for many years too. I have a few other heirlooms from her in the way of other jewelry – the valuable gold and gemstone type, yet these are very significant as well and I am happy I found them: 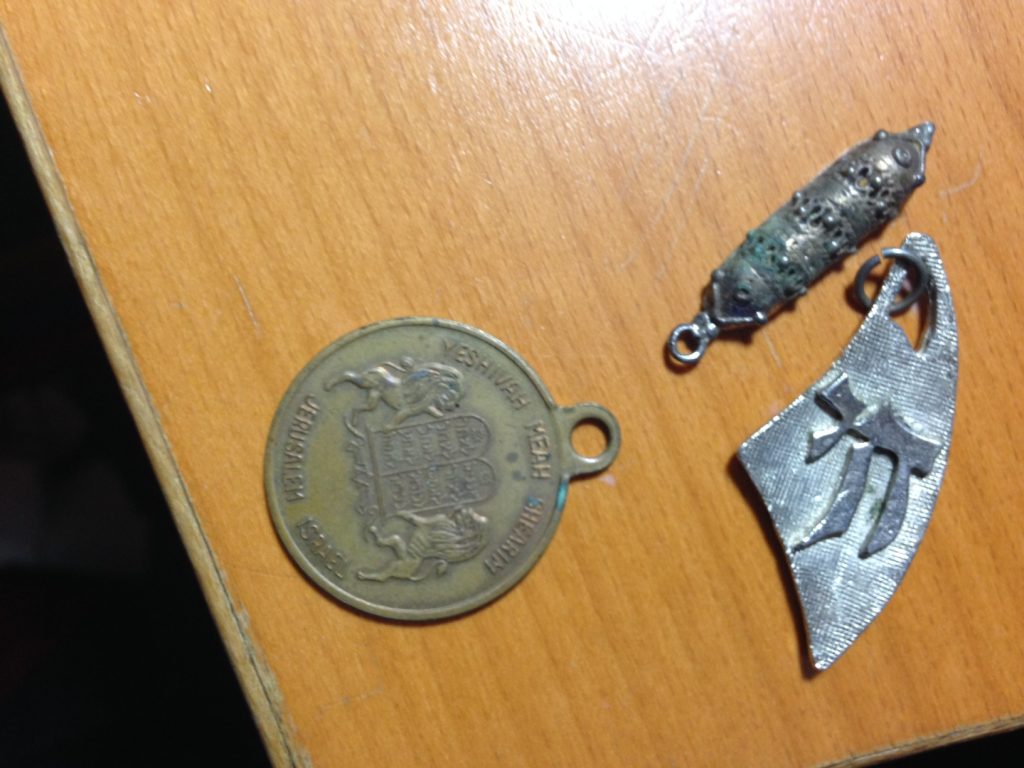 Next up (BELOW) is my prom pin. Please note that the red stone is long gone and I only got it because one of my besties, Pattie, (who I am still friends with and LOVE today) got me one because my lousy creep of a boyfriend denied me going to my prom; due to his not believing they were events worthy of him attending. True story and I still bear the scars of missing my prom. I was very “rah rah” into high school and that is a trauma I will never heal from. (Even though he and I are still friends to this day.) 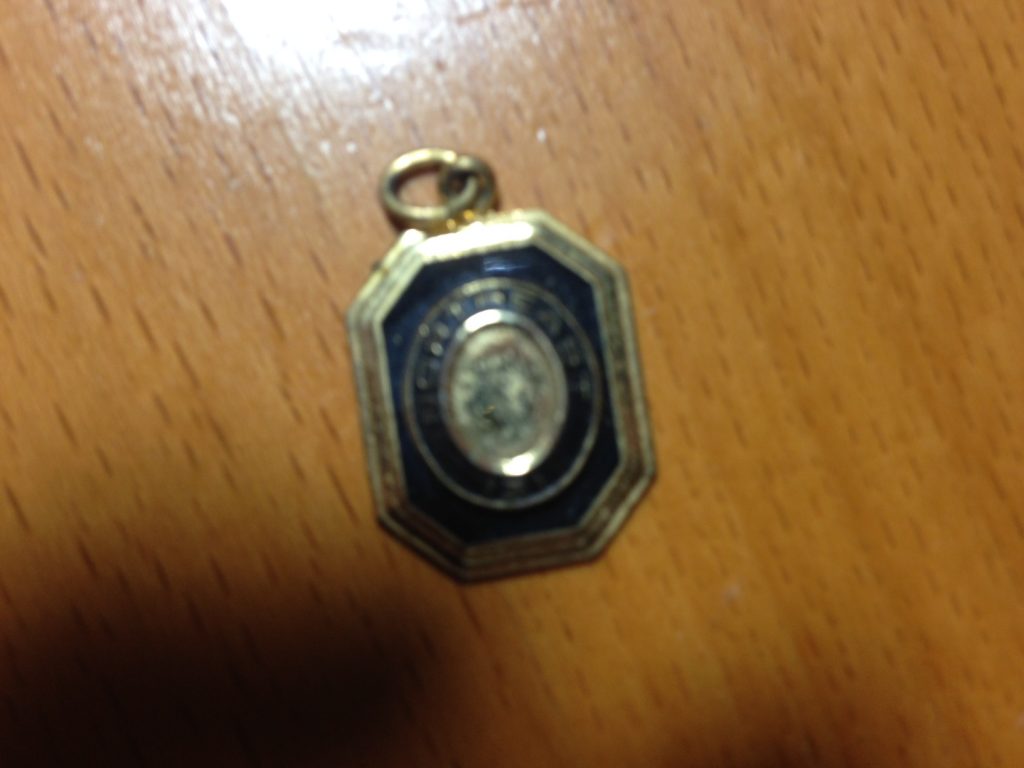 Next up is a Beatles card. An original from 1964, tucked away in there and not even featuring Paul, my favorite. 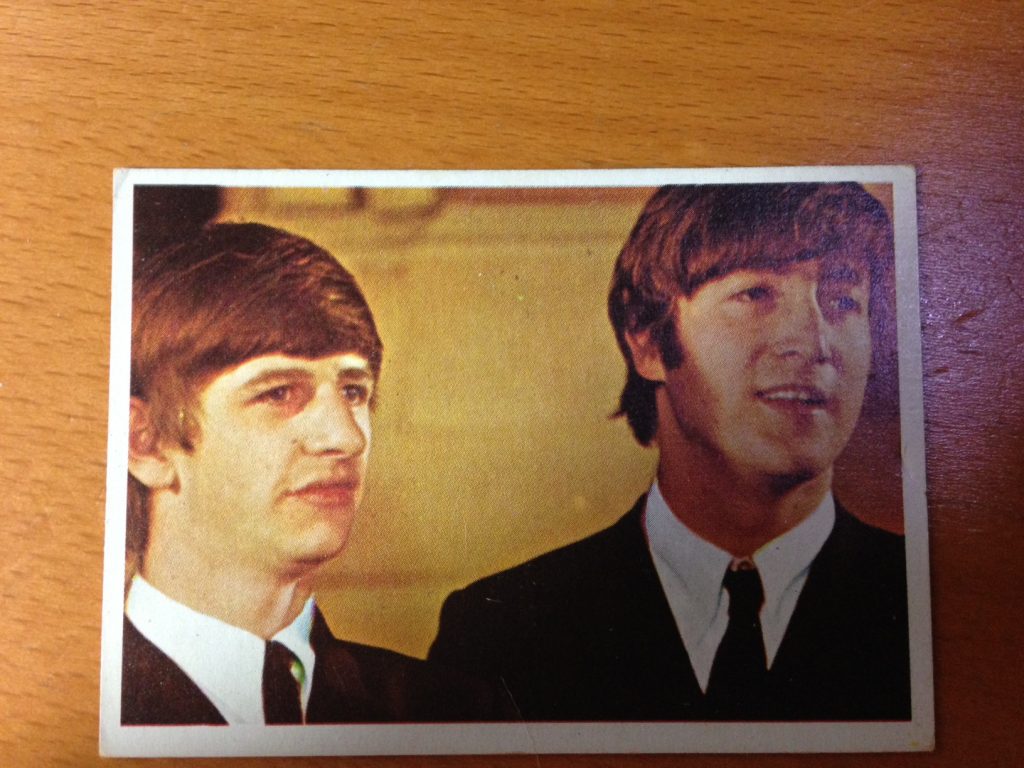 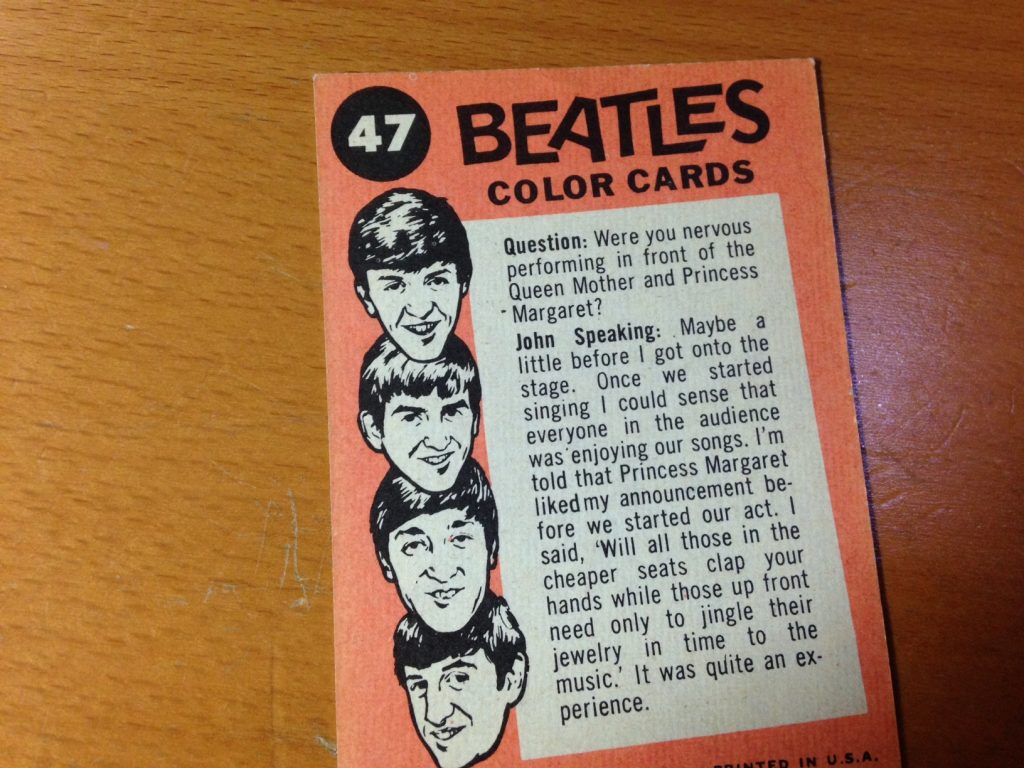 Remember all those trading cards we had? I know I have more, I just have to hunt some more in my attic to find elementary school memorabilia. It must be in a box somewhere!! Perhaps my next mission.

Below you will find my first earrings when I got my ears pierced in sixth grade. Note there is only one left. I was notorious at losing earrings. We all had those little gold balls in those days. 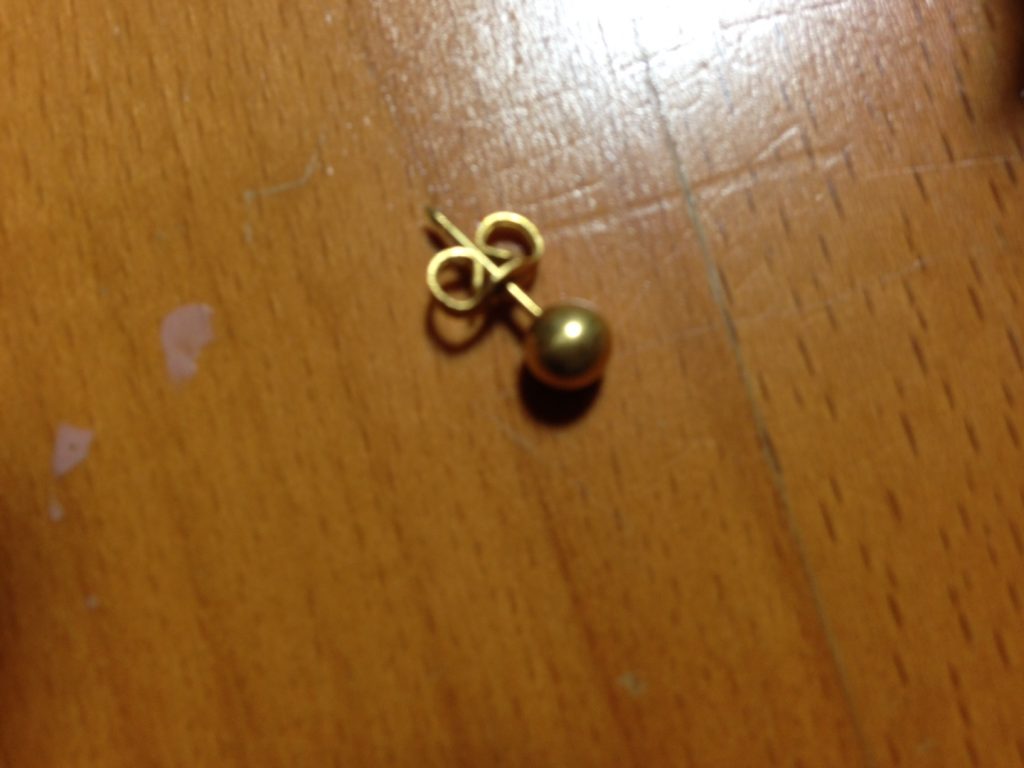 Next are the two items ALWAYS seen on my wrists throughout High School. One is a POW bracelet, and the other was my mod lucite watch. 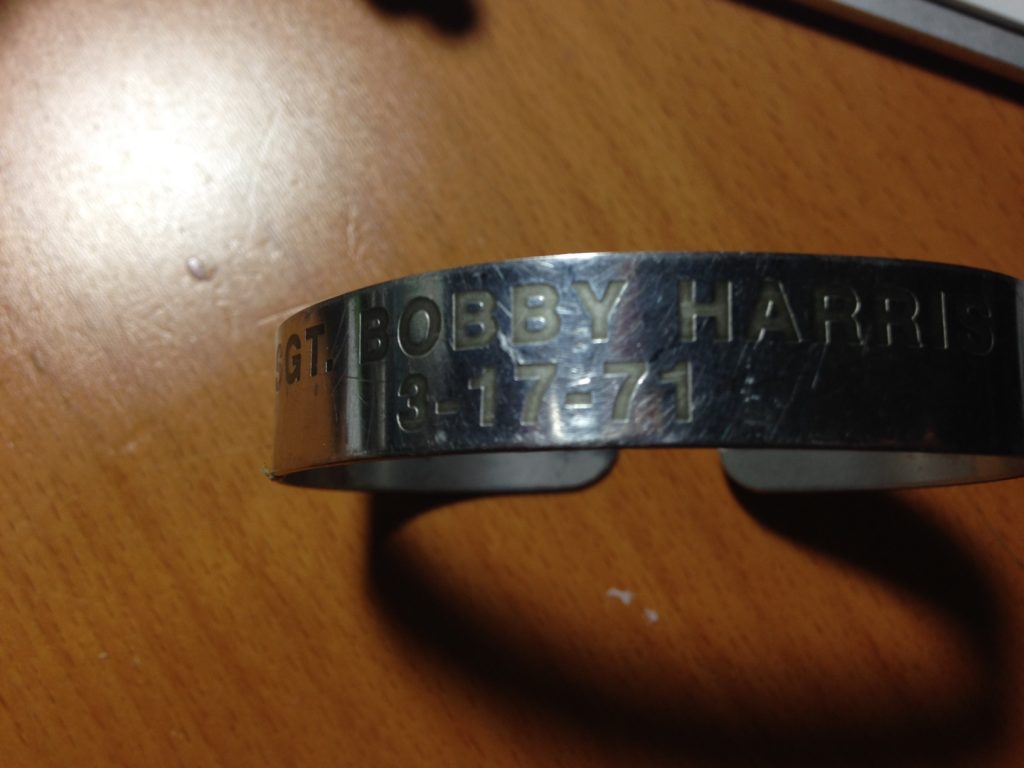 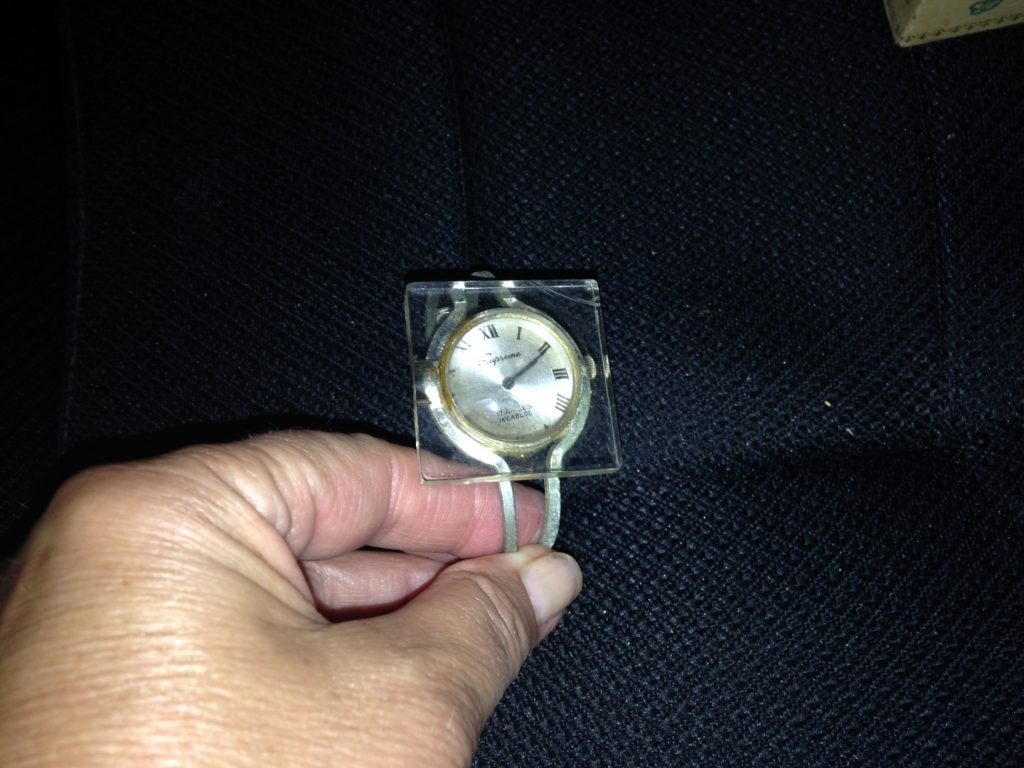 Girls from the late sixties and early 70’s – I know you will relate to those items. And now we have the two rings I wore through high school – the famous PUZZLE rings that we would take off in class and break apart to put together. We had these before Rubik’s Cube was even a thought. And of course I had a tiny mood ring too. 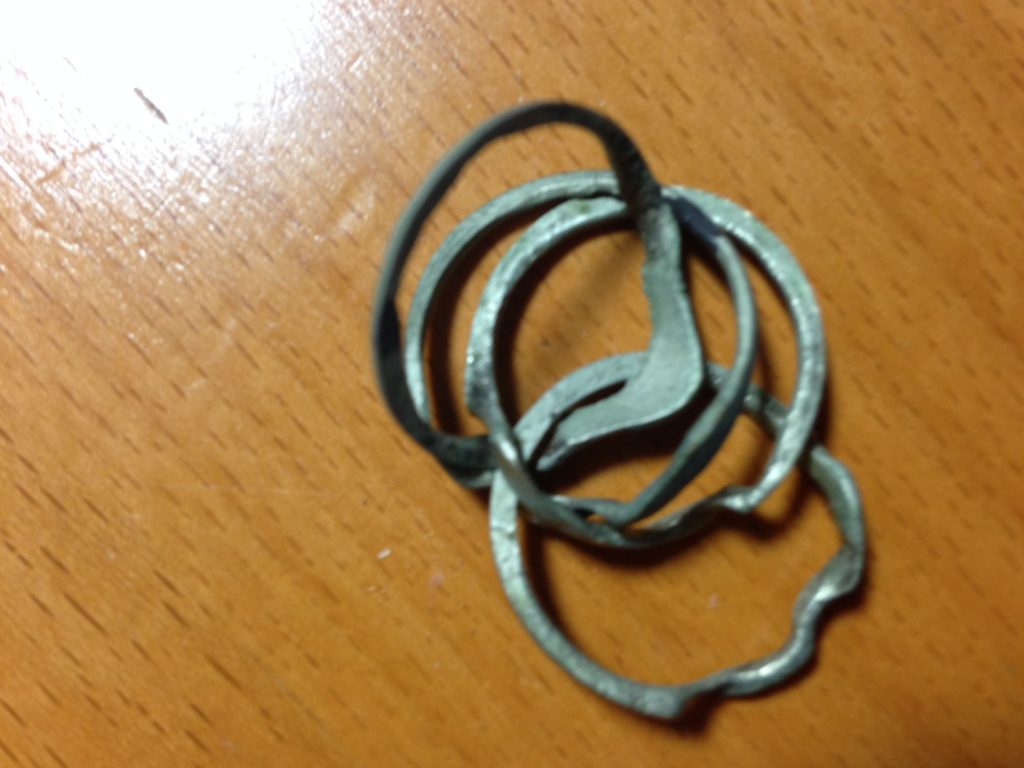 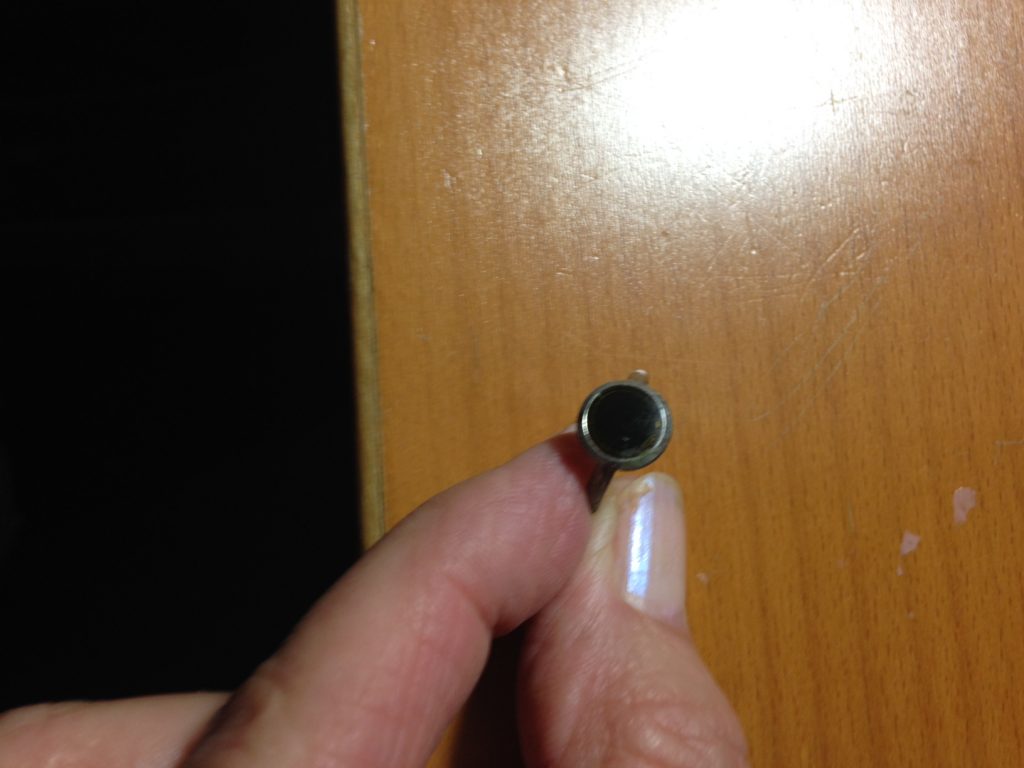 I forgot to try on that tiny mood ring to see if it still works and the black turns a color!

Next is the other ring I wore all the time – a silver and turquoise one my Gram and Pop brought me back from Israel. 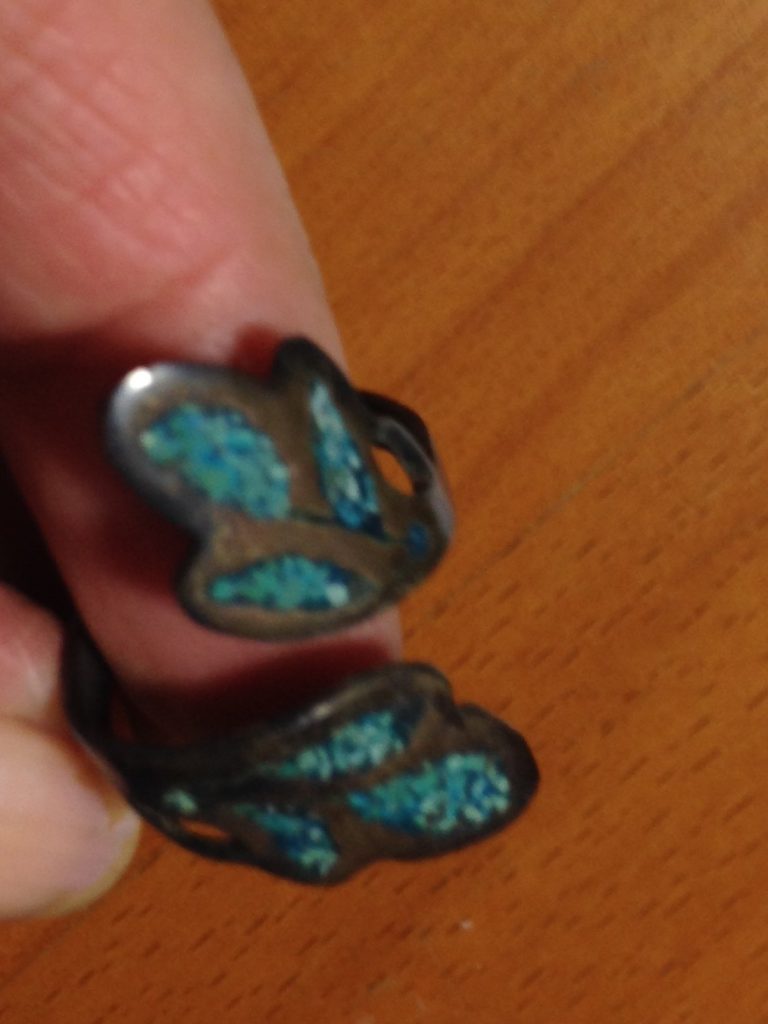 Below is a Minnie Mouse watch. I did not have it as a kid, but believe I purchased it in college. I had always wanted one as a child, but you have heard the old, “we were poor” stories before. 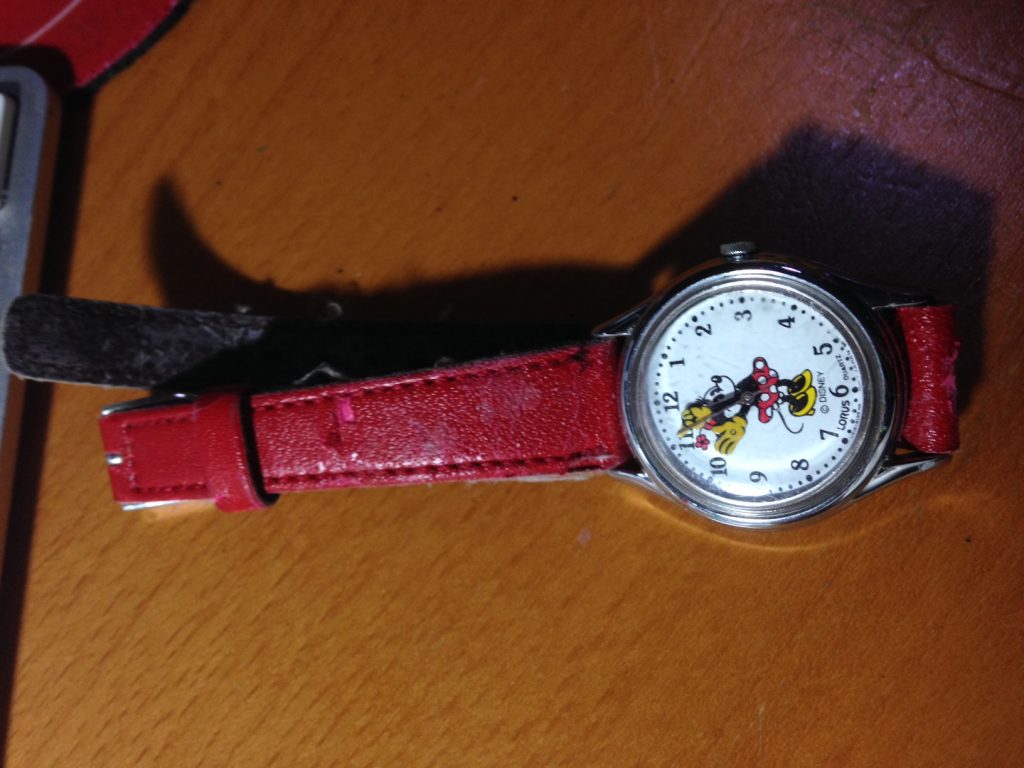 I also found a “mink” pin that was given to me by my junior high boyfriend. I kept it just because he gave it to me, but it has sat in the jewelry box unused and not worn since then. I guess I felt it was an important loving gesture to remember. 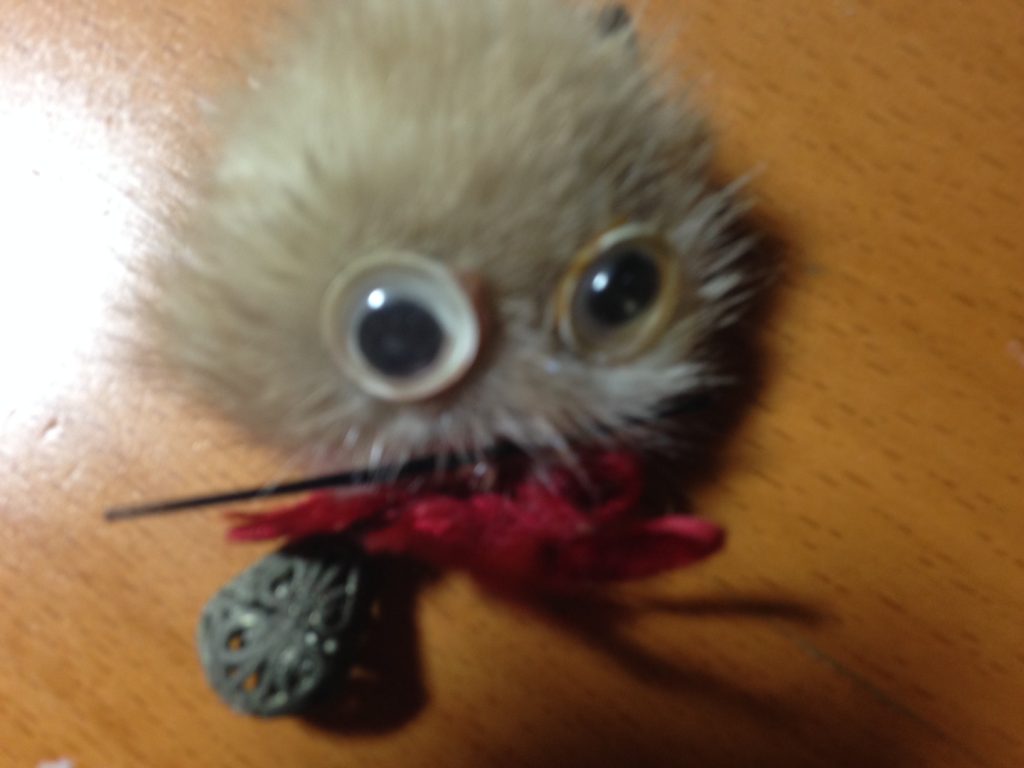 The next two items were given to me by my maternal grandparents, Nanny and Pop-Pop, and one is an Empire State Building pin and the other is a charm bracelet. 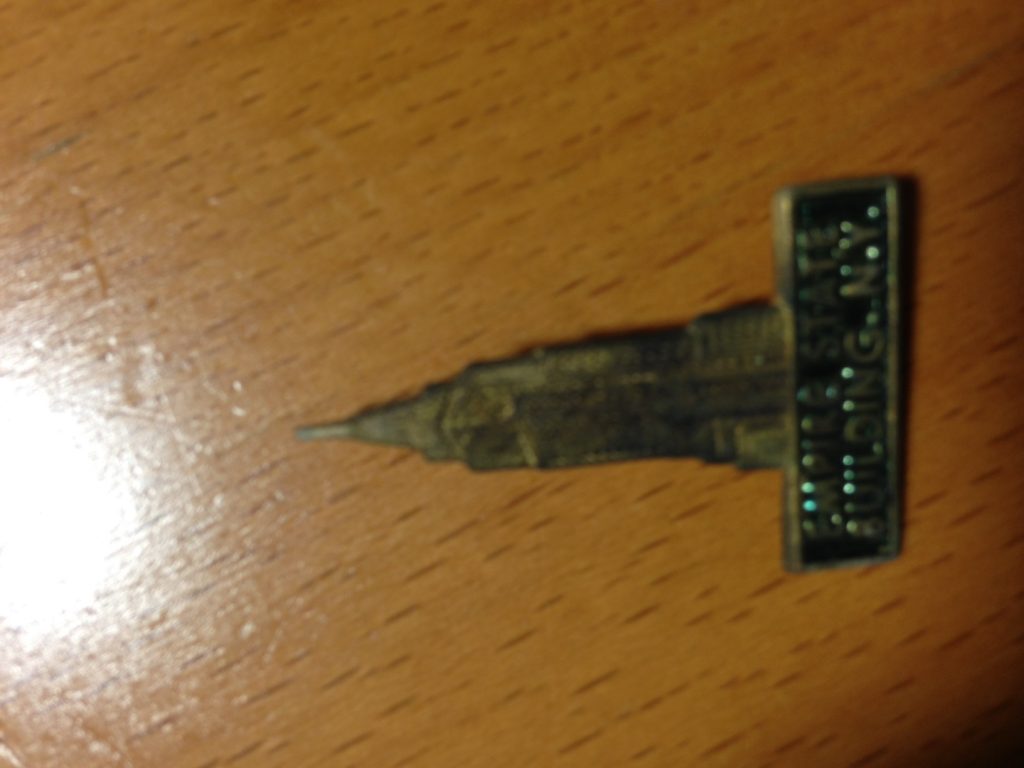 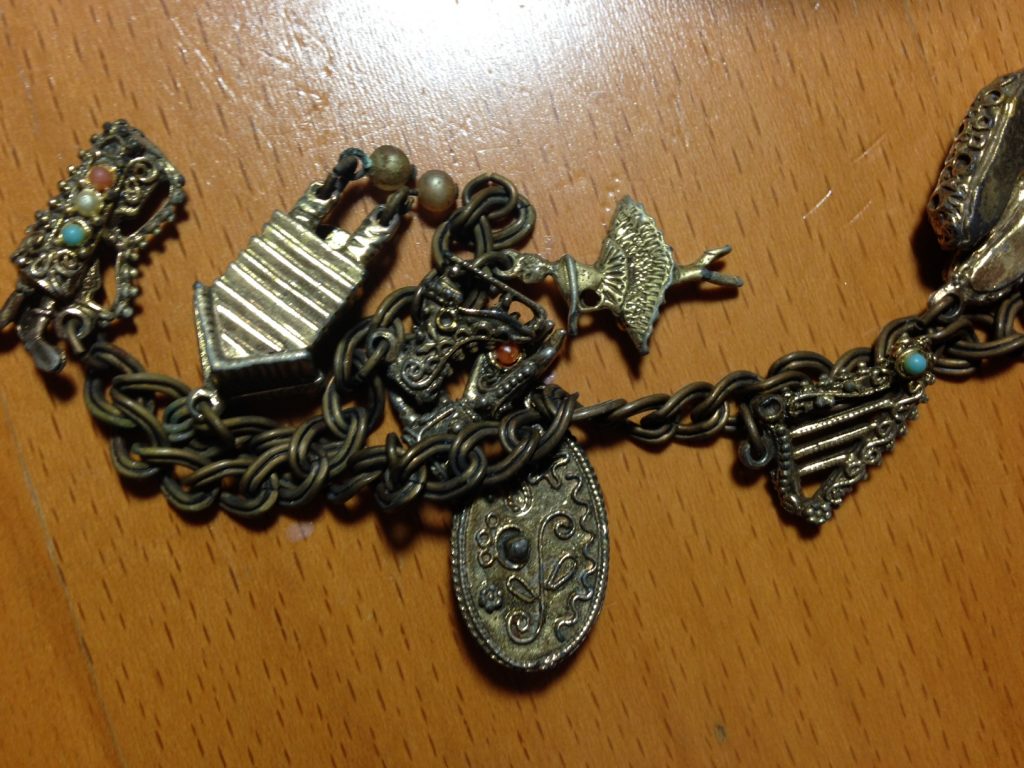 Now it becomes a bit weird. So far, all the things are fairly typical of a young girl’s jewelry box. Yet, I also found in an old brown envelope – my teeth that were pulled for my braces – a common thing to happen in those days, but darn it, I want those teeth back in my mouth. (Though I am fortunate for a pretty smile thanks to those awful braces.) 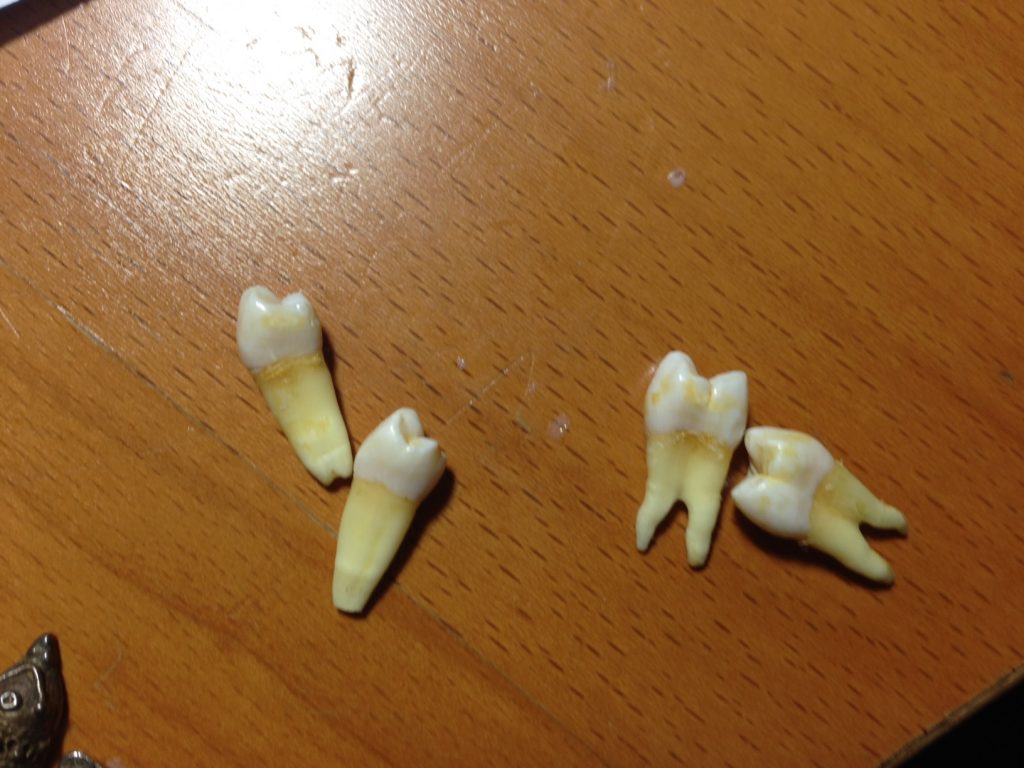 Next are some time capsule things that I put in there to memorialize the place and time it was. The first are pennies, once BRAND NEW and SHINY and now old and tarnished. I remember putting in brand new pennies for the years 1970, 71,72, and 73 – my high school years and my first year in college. 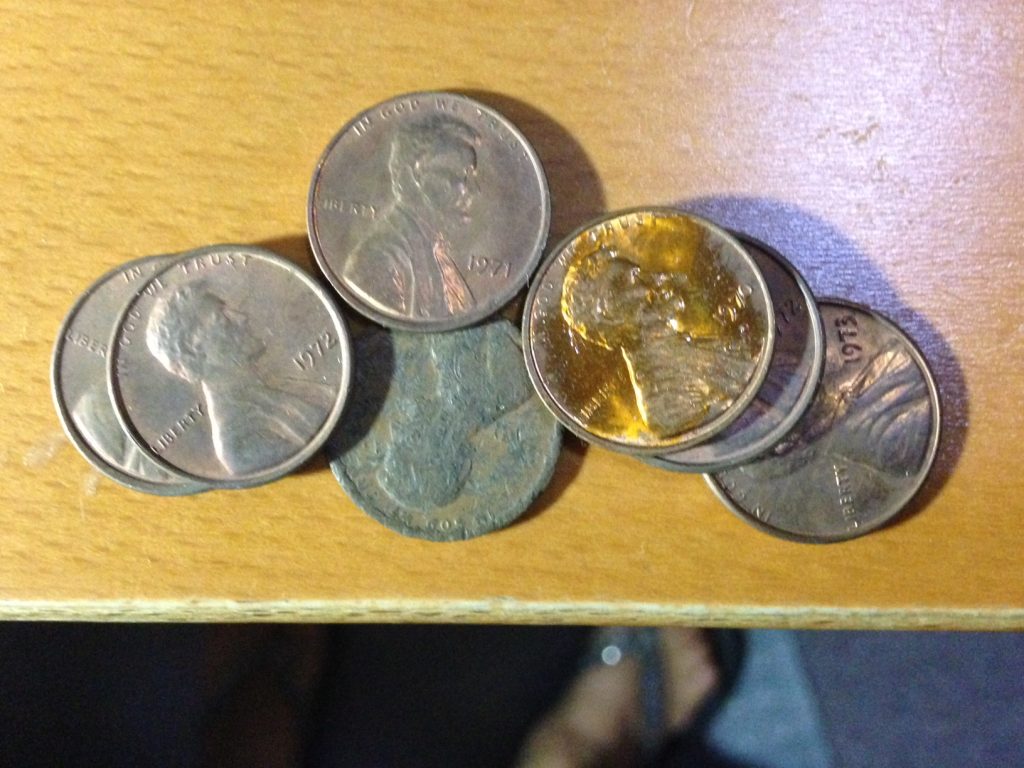 And stamps of that era, including some from my penpal in New Zealand that I blogged about here 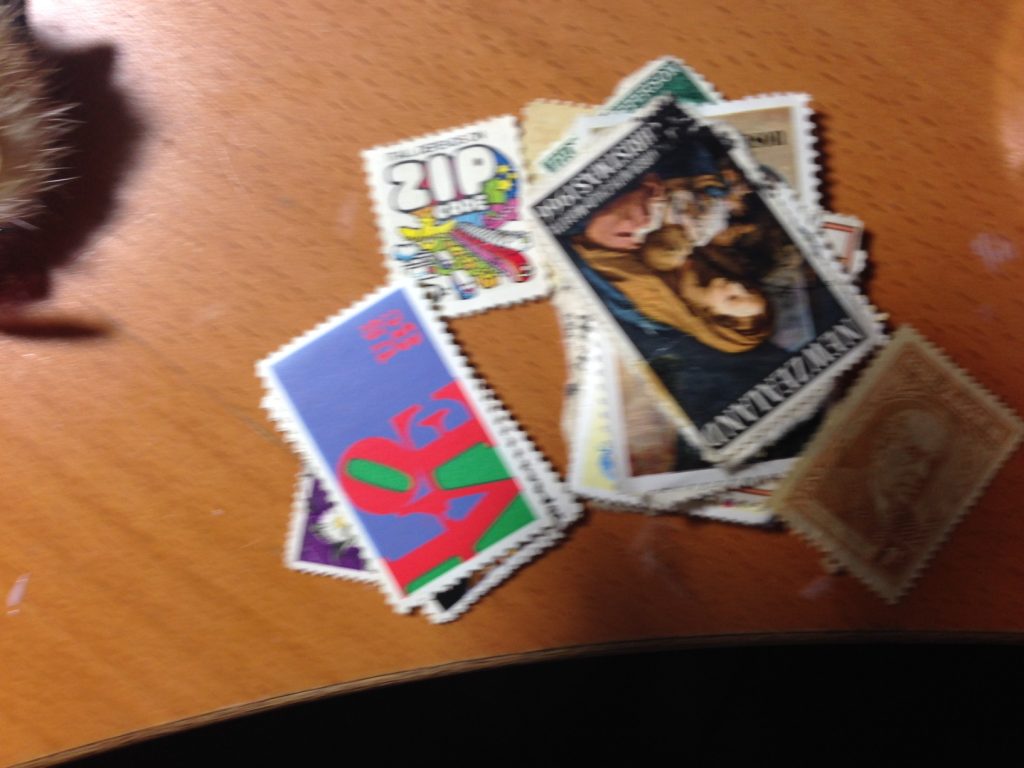 Last but certainly not least were two ticket stubs that were put into that precious jewelry box much later – in the eighties as it also contained my daughter’s baby bracelet (she was born in 1987). One is a stub of a late November 1984 Bruce Springsteen concert. I was nine months pregnant and rocking out to Bruce for that one. My son Brett came two weeks later. 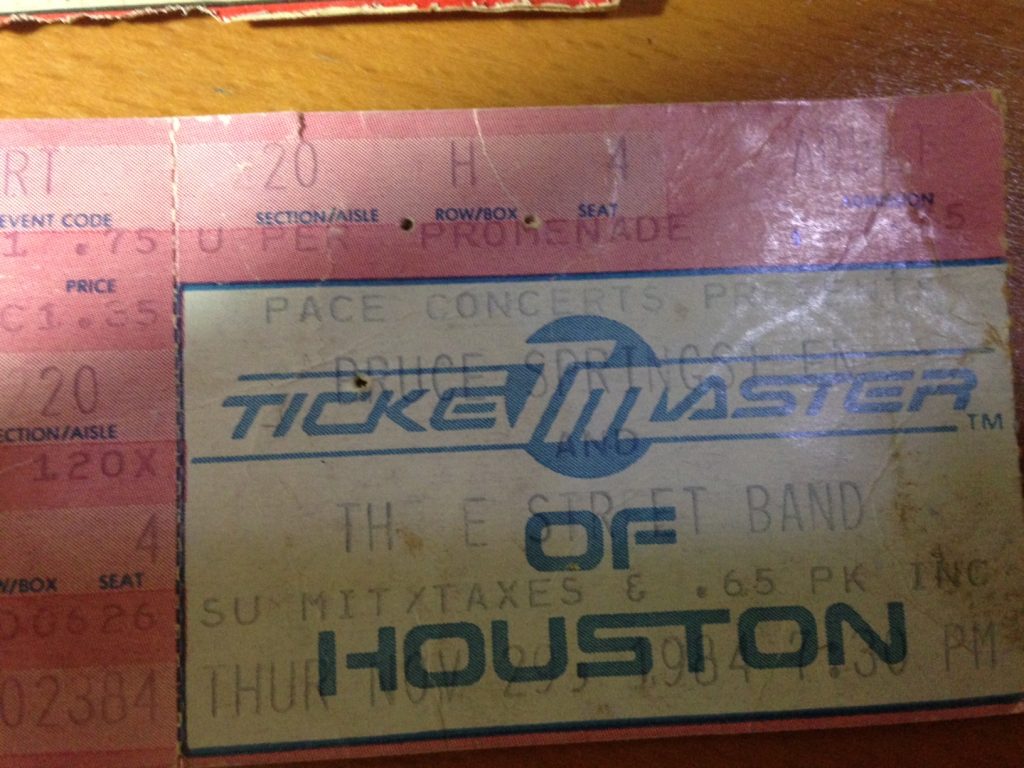 The next ticket stub was extremely momentous for me. It was my very first concert seeing my Beatles idol Paul McCartney for the first time. (now five times under my belt) It was a magical occasion because I traveled to LA for it – my husband had business there and we scored 10th row seats on the floor. Paul crooned to me as if nobody else was in the room for that wonderful concert. I will never forget that feeling as long as I live. It was certainly a dream come true. 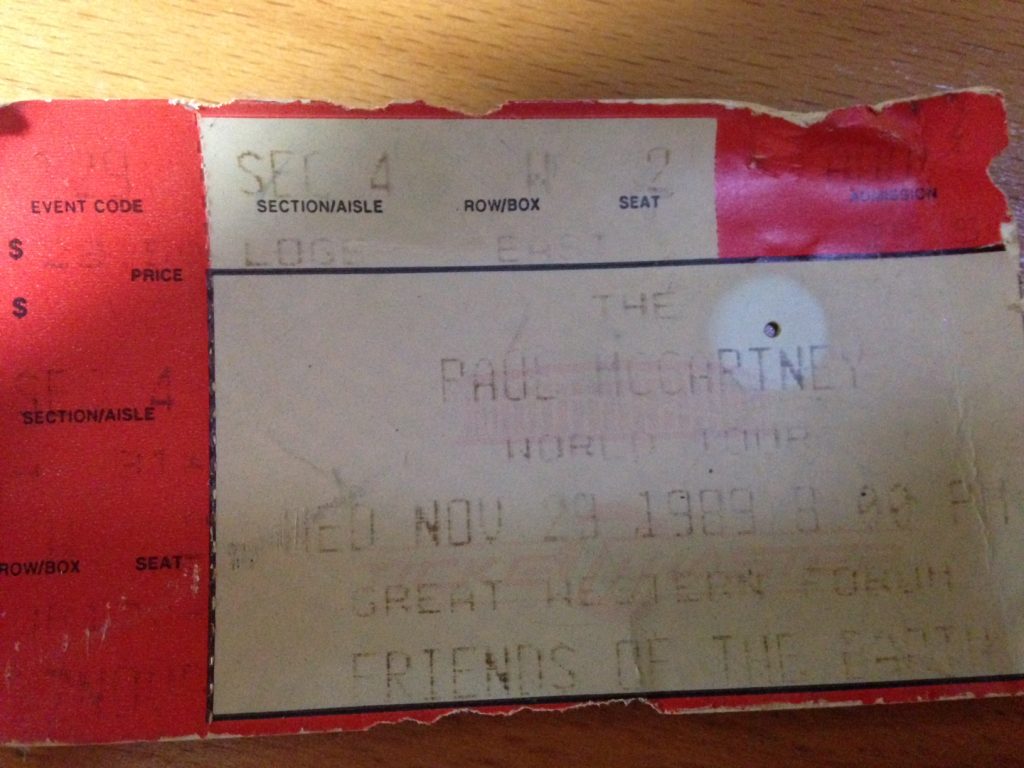 In fact, though I have been to some incredible concerts – more than the average person, and have been on cloud nine many times during bucket list concerts, this first “Paul” show was one of the top ever in my memory. The year was 1989.

So there you have it. My jewelry as a mod teen, some sentimental childhood things, and some time capsule items – all in my old childhood jewelry box.

Hope you have enjoyed this look into the past. I know you too would give anything to take a look into your old childhood jewelry box some 35 years after not looking within as I just did. It was an incredible experience and gave me so many smiles and a few laughs too.

Let me hear what yours contained!