Another Walk Back into My Past with Some Regrets

I have been taking a walk back in time – one that is a bit uncomfortable because it requires some self-examination. In this case, it has been like those questions that ask if you have any regrets about your past, or whether you would do it all over again (hit a reset button) that you normally answer an emphatic NO to, but then think of an instance or two where you are mired in regret? This is one that I really messed up and regret treating a good person less than they deserved.

NOTE HERE: I receive an all time high volume of mail from all over whenever I reminisce about former flames so of course I am going to continue to milk this very popular discourse.

To begin this, I want to remind about the fact that I have been away from the city that I grew up in – Philadelphia – for 36 years. That’s much longer than the amount of time that I physically spent in my birth city, but still, my roots were firmly planted there, and I like to re-visit those roots from time to time.

For the first 20 or so years when I moved to Houston, it was nearly impossible to keep in touch with lots of people from my past. There was no Internet, no Facebook, no Linkedin, etc. Snail mail was nearly impossible as a method to keep up with people, and telephone calls – before cell phones – were considered long distance and too expensive.

There were a few important people (other than family) that I used my ferocious tenacity to keep in touch with, and I am happy to say that it was worth my effort because they are important to me. But as for the rest, still important – but not critically important, I mostly lost touch.

Yet now, with the Internet and with social media, I have caught up with many who played a role in my formative years. I find social media a great device for someone who still needs to stay in touch with the past because I truly feel that our past shapes us into the people we are today.

Just as one example, years ago I connected with an old boyfriend Danny (the subject of this, and this blog published a while ago – yes two on him!) who as a mature adult explained things about me that I did not understand both at the time the events in my youth happened, and even years later. Those self-awareness moments are important in understanding the real me because it is all part of my personal evolution, and I was truly disconnected from my past for many years. I was grateful that he opened up to me.

Aside from those learning moments, I value the reminiscing part too. (As still another old boyfriend cleverly termed it, “reminisson” – a play on words using my maiden name.)

Now that I have mentioned two old boyfriends so far, I must point out that I am learning things from girlfriends and schoolmates of the past too. Don’t think this is just about them, because it is not, though this particular blog as well as the past referenced ones do mention the boys. However, some of them knew me better than anyone except maybe a family member and a bestie girlfriend or two.

My most recent connection was with a friend of still another former boyfriend, who was a summer romance for me. With that connection, I kind of cringed because this fine young man was caught at one of the most dysfunctional and chaotic (emotionally) times of my life. In that state, I casually discarded him, and perhaps used him and mistreated him (unintentionally) for a period of time. He was just too good a guy to do that to.  Part of my dysfunction at the time was being caught up in emotions being stronger for a past love and a future love who he was sandwiched in-between, than it does about the quality of person he was. In fact, I can go out on a limb here and state that I have absolutely no regrets about any other boyfriend and the relationship path, except for this one, only because he deserved better. I am not experiencing remorse for not ending up with him or anything silly like that, as I am very happily married and in love with my husband Gary, who has the most important distinction of being my LAST love.

The only reason I ever think about this summer fling at all, is that I am a Moody Blues fanatic, and this is the year of constant Moody Blues in their 50th year anniversary concerts I have attended, as well as the more recent news that they are FINALLY being inducted into the R&R Hall of Fame.

I have a photographic memory about my past, helped with diaries I have saved, and some letters, cards and other memorabilia. When his friend connected with me, immediately in my mind’s eye, I pictured him as the adorable young guy I had a summer romance with, and who played me all the Moody Blues albums that first fueled my passion. Yet, I had no photos of him, as we took very few photos back in those days before cell phones with cameras. I pictured him whenever I heard the Moody Blues sing certain songs. He has left a lasting mark in that way. It is an automatic, knee-jerk association.

He was my one and only summer romance as the rest of my boyfriends were longer term and well beyond that limited period of time. (And just recently I heard the Robin Ward oldie song, “Wonderful Summer.” “I want to thank you for giving me the most wonderful summer of my life….” I never said that to him, but it would be true up to that point in time.) We had a fantastic time together that summer, fun dates, tons of flirting, and we even got to work together. It was “a beautiful time,” as alluded to in a letter he wrote that you will see below. Most notable – he even introduced me to his family by inviting me to dance at a family Bar Mitzvah at the end of the summer- where I met his cousin, the famous Len Barry, a singer from the Dovells and a later solo career. This was a thrill at the time.

There were times at his pool club, late night dates for ice-cream, rides with his sports car top down, and of course, those times listening to our favorite band of the moment together in his air-conditioned rec room. A perfect summer fling.

He was near genius smart, very clever and witty (another biggie for me) and very cute. He was a suburban kid with few financial worries and drove a neat sports car. I knew he would be a huge success in his future and as I Googled him, that turned out to be true.

Aside from his above attributes, he was unselfish, kind, giving, and showed enormous restraint and patience with my keeping him at arm’s length due to a blossoming new love. (My former love was insanely jealous of this summer guy, and I relished this because I was trying to impress upon him that he already lost me for good.) I actually enjoyed keeping both the old and new love a bit jealous, and this is where some of the dysfunction and chaos comes in.

If all in life is attributed to timing, it was poor timing for this guy more than anything else. I just had a greater emotional pull by the other two, and he was caught in the middle. When the summer ended, and he was also geographically undesirable due to being away at college, I kind of let go, but he did not.

I feel most bad that he wined and dined me and although I very much enjoyed being in his company that summer, I really led him on in his thinking that it was developing into something more than a summer romance. I am not like that now. I am a giver rather than a taker, and I feel bad I was such such a taker at that point in time. I was immature, and didn’t understand the value of a person that had as much to offer as he did. He was a fling and perhaps even a means to an end in my mind at that time. I was just in a selfish and truly dysfunctional stage in my life.

Not that I regret the path my life took, my move and my life in Houston, and my wonderful children will always be the best things that ever happened in my life. When I look at the big picture, it doesn’t matter a bit except that I wish I had been nicer and done things a bit differently in respect to him.

I kept his sweet letters he sent me for an entire school year before he gave up on me, and it is in my memorabilia box. This box was stored for 40 years at my parents house in Philly, until I moved my parents to Houston and rescued the box. I went through it and did not throw out the diaries and letters because they remind me of who I used to be.

And now that I wrote all of this to get it off my chest, I had to go and pull a letter and paste a snippet here so you can see how sweet and witty he was. I mean, who would come up with “Oh Godlike creature?” He was an artful letter writer and ahead of his time! 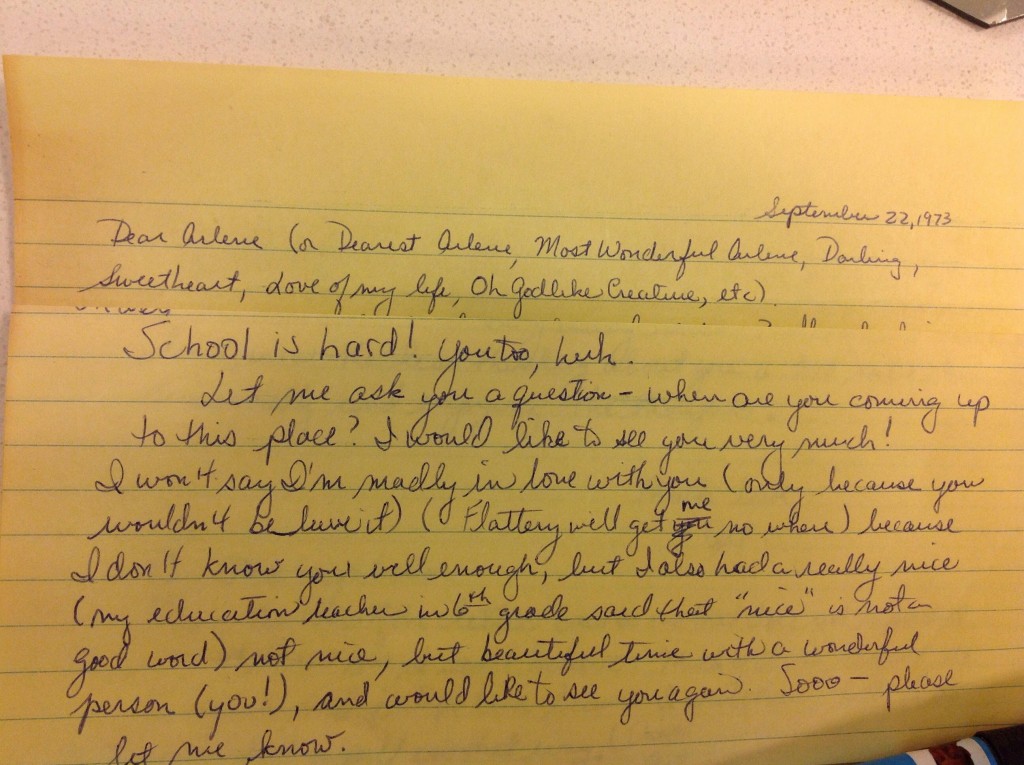 (Identifying info taken out of course.)

Anyway, in connecting with his former friend, (I don’t think they are in touch now) when we private messaged about our mutual connection, he sent me a photo he had of my summer romance guy from that same era, and now I have that to remember him by too. My mind’s eye memory was correct – he was very cute.

The photo of course, I will just keep to myself. He might not even remember me at all, (and perhaps that would be best!!!) and I don’t want to encourage anyone who might know him to let him know I blogged about him! As I said before, I cringe at my former self in instances like this one.

Who knows, maybe some day he will Google me and stumble upon this, and accept my apology for my immature behavior towards him.

Let’s hear from you. Whenever I speak of a prior relationship as a young girl, I get tons of mail. Did you have a summer fling? Is there anyone you mistreated only to regret it later? Let me know! I can’t be the only one.