What the Heck is Water Ice – Coming to Houston Soon!

I have written before about how certain foods that I grew up with take the form of extreme comfort food for me. In Philly, where I spent my formative years, it just was not the springtime until the water ice trucks arrived at playgrounds, parks, and schoolyards.

What you may ask is a water ice truck? It’s one that sells water ice, along with other yummy things like doughy soft pretzels. I know, I know, you still don’t know what water ice is. I promise I will explain below.

But back to my reminiscing, I loved the carefree days of my youth. When it stayed lighter out longer, that meant more time at the nearby playground, or playing outside which included riding bikes,  jumping rope, jacks, roller skating on metal skates that went over your shoes and had keys to adjust them, and even whiffle ball if you were a little tomboy like I was. It meant prolonged games of bottlecaps, where you collected decrepit old metal tops of soda bottles and played a game like marbles with them. After the long, cold winters, these days were welcomed in my neighborhood chock-full of children of all ages.

Now playing outside for hours (we didn’t have anything else to do except maybe homework, or book reading, or an afternoon TV show) until dinnertime meant that we got hungry AND thirsty. There was no bottled water in those days.

In the spring and summer, there was only ONE treat that took care of BOTH the hunger and thirst – in addition to relieving the hot sweat we built up by playing so hard.

That was a scoop or two of water ice, served in a paper cup.  The cost was about 25 cents or less for a double-scoop, meaning most kids could afford the treat pretty regularly.

It came in flavors like cherry, and chocolate, and lemon and orange. Later on, fancier 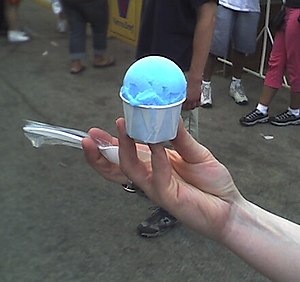 flavors came out, but most water ice trucks had those basic flavors.

My favorite combo was chocolate and cherry – I found the chocolate made my hunger pangs go away, and the cherry quenched my thirst perfectly. Plus I always got the bonus of having cherry colored lips and tongue, and as pale as I was – this was a true bonus. (no lipstick needed!)

Water ice is Italian ice, and probably only Philadelphians call it water ice. Only it is not the HARD ice, it is the mushy soft ice. Not chunks of ice chips like a snow cone – sort of a firm slushy texture. As it melted, you were able to drink the syrupy liquid.

Now here’s the great news for me. There is a GREAT franchise of this spring and summer icy treat called Rita’s. In Philly it is called Rita’s Water Ice. Most other places it is called Rita’s Italian Ice. At any rate, a Rita’s opened recently in Galveston, and I was soo happy at that news, except I haven’t been able to make the hour long drive to the beach to get some.

So I just heard that one is opening up in Houston on Fry Road, only 20 minutes (without traffic) from me.  WOOO HOO.

I will admit, other water ice places have tried and failed in the Houston market. It is such a warm climate, but people just do not know what it is, so it is hard to market and get people to understand the true wonderfulness of it.

But Rita’s is a powerhouse franchise. I bet it succeeds and before long, I won’t even have to drive 20 to 30 minutes away.

Now if you have never gone to a Rita’s – here’s my tip of my very favorite concoction. They have great flavors now like Banana chip with real chocolate chips in it, and I usually get that with a chocolate soft ice-cream  swirled scoop. If I am feeling decadent, I will get jimmies on the top. (That’s what Philadelphians call Sprinkles)

I can’t wait! Yummy! Houston – please get behind this delicious food product. That’s an order. I am NOT going to have another water ice place fail me.