Husband Follies Episode I-10 – Trusting Technology Beyond All Reason

Well, it has been a while since I last amused with an episode of Husband Follies. If you haven’t read the previous ones, you are really missing out and they are linked here, here, here, here, and here. Make sure you read each one; they are all quite different yet all funny because my husband is One Funny Guy.

One of the themes I have touched on before is how in love with Technology my husband Gary is, and how I even think sometimes he loves Technology more than me.

In this latest follies instance, we will discuss Google Maps. This is something my husband insisted that I get an app for on my phone, and he has been aggravated knowing I have not done that. I rely on Map Quest and Waze and do just fine with those. And based on my past experiences with my quirky husband, I don’t trust Google Maps. No, not at all.

But Gary trusts Google Maps, oh does he trust it. For example, one time we were going to dinner at a couple’s home who had invited us, and having been there exactly twice before, I told Gary to put away the Google Map app, that it was three minutes and about a mile from our own home.

When he said that, I started yelling too, and pleaded with him not to go any further in the wrong direction because we were going to be late. He showed me the Google Maps directions, and again, I tried to reason with him that it was in the opposite direction just a short distance from our home.

His temper shot, Gary refused to believe that Google was wrong, but somehow I convinced him to let me navigate and he turned around and we arrived there just a few minutes late.

I did NOT say “I told you so” a hundred times, but I was smug afterwards. Gary later blamed it on me giving him a Bellaire address (a suburb just north of us) and it turned out that they were one block south of where Bellaire started, so they reside in Houston proper and that’s what messed up Google Maps according to Gary.

So here we were heading to New Orleans for a wedding weekend of a dear friend, and of all weekends, the I-10 freeway which runs from Houston to approximately Florida and for sure to New Orleans, Louisiana, was CLOSED at the Texas/Louisiana border. Flooding the previous week had compromised the nearby river and the road was threatened to flood from overflow. So the Texas Department of Transportation closed it just in time for us to make a 5 hour trek there by car. (We chose to drive as there were several events and several venues, and we could explore more that way.)

All week we heard about the torturous detours that took people way north (four hours or so) and we were not keen on the thought of a 9 hour drive for a weekend getaway.

I have the most sweet friends and one of them, Amy, was also driving to the wedding weekend, and she has family in Louisiana who scoped out a better route for Amy to take. It was a long and convoluted story, but the bottom line was that a State Trooper recommended a route that did not make the newspapers or Internet, but was a wonderful secret because it only added about 30 minutes to the trip. So of course Amy sent me the course the State Trooper recommended to her relatives and I assured her we would leave bright and early and go her way.

She texted me a bunch that morning because they left about an hour before us and told me the route was “CLEAR SAILING.” This route went through Winnie which was not as far east as Beaumont.

That apparently was not good enough for my husband, who unfortunately had Google Maps open, and he saw “RED” spots meaning highway closures on that route, and Google was telling him to take a route from Beaumont and to drive further east on I-10. Mr. Stubborn had me very chafed that he would not follow Amy’s guidance.

So my husband completely ignored Amy’s text and route and followed Google. And boy, oh boy, was he ever sorry that he did. Google Maps was days behind WRONG and I-10 was closed before Beaumont and we had to turn around. Gary was busy googling another route, and I was pleading with him to drive back to Winnie, maybe another 30 minutes, and follow Amy’s detour route.

Nope. Gary decided to once again rely on Google Maps. Again, we got turned around. Twice denied getting into Louisiana at the border, Gary decided after our 2 1/2 hours of still not being able to cross into Louisiana, that he would follow Amy’s route. (And for a laugh, watch this You Tube from Candid Camera on them closing Texas for the day.)

NOTE: Google Maps was also WRONG about the red areas, there were no road closings, and just as Amy told us, it was clear sailing.

So, by the time we got into Louisiana, we could have practically gotten most of the way to the city of our destination. Instead we were hours behind and ran into not one rush hour, but two – into Baton Rouge, and into New Orleans. Eight hours and some minutes later, we arrived at our destination. (And believe it or not, Gary still wanted to follow Google Maps back home to Houston a few days later when I-10 was reopened and free and clear, and Google Maps told him to take a detour way north, even though all roads were open.)

Oh, Gary paid dearly for this mishap. At first I wouldn’t speak to him, and then I told him he was not allowed to stop until we were in Louisiana proper. With the fact that he needed a pit stop and was starved, this was ample punishment. I also played pop confectionery music the entire way off my iPhone instead of letting him listen to his music. Yes, Gary endured a full Monkees set to punish him and grumbled about bubble gum music the whole time.

I looked at him, and he knew this would be a blog. He was so excited at the prospect of having the world know how wrong he can be, that he offered to map his insanity route for all to see below. The great thing about my husband is that when he is insane beyond reason, he admits it. So check it out for a laugh – make sure you look at the Key on the left. 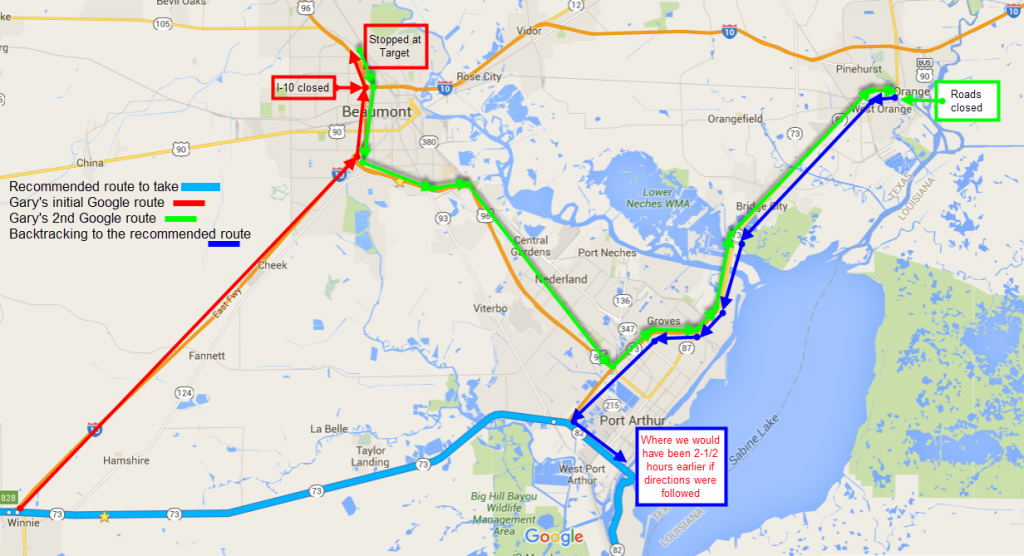